Reducing ETL and Data Integration Costs by 80% with Open Source

by Michael Fedotov, Alex Khizhniak, and Renat KhasanshynSeptember 30, 2008
Learn about the trends in today’s data integration market that help companies to benefit from lower TCO by using open-source ETL solutions.

Millions of dollars spent on ETL

Companies of all sizes are challenged to deliver their products and services to market faster and to manage more complex sales and marketing programs with limited budgets and decreasing time frames in order to accelerate revenue generation. To do so, having the right data integration and data quality model is critical.

Today, companies spend enough on data Extraction, Transforming, and Loading (ETL) to start questioning whether this technology is as beneficial as it is positioned; and the costs associated with it are still going up. Yet, most companies seem to underestimate their own expenses on ETL. License costs are the only factor (albeit not an inexpensive one, for sure) to be typically taken into account, while the real Total Cost of Ownership (TCO) is comprised of labor costs and hardware costs as well, and can outnumber license costs by many times.

According to Gartner, corporate developers spend approximately 65 percent of their effort building bridges between applications.

The true amount that an enterprise may spend on ETL can reach millions of dollars. Non-IT executives would be horrified to realize how enormously money-consuming data integration is. But, there is a way out.

This article will show how saving up to 80% on ETL costs is possible with open-source technologies. We will analyze the Total Cost of Ownership of a typical data integration project, break down the cost structure, determine how each of the costs can be cut down, and then offer examples of major companies that have saved on data integration.

Why is data integration so expensive?

And the issue is not only about the license costs. According to Yankee Research, over a three-year period, the TCO of an integration application is more than eight times the initial software license investment. So in fact, it’s the running cost that is the most expensive. Comprised of the yearly license fee, hardware costs, and labor costs, the real TCO of a data integration solution, according to Yankee Research, can rise up to $509,600 annually—and the number seems to be increasing with every year.

One may start to think of data integration as something that constantly consumes enormous resources, human and financial, but that is only half the story. The other half is that to reduce the TCO you have to change the cost structure, that’s it.

Today, you can save on most items in a “data integration shopping cart,” starting with the license fees. There are a number of open-source solutions available for evaluation and real-world projects at no charge. With open source, you can practically eliminate licensing fees altogether. 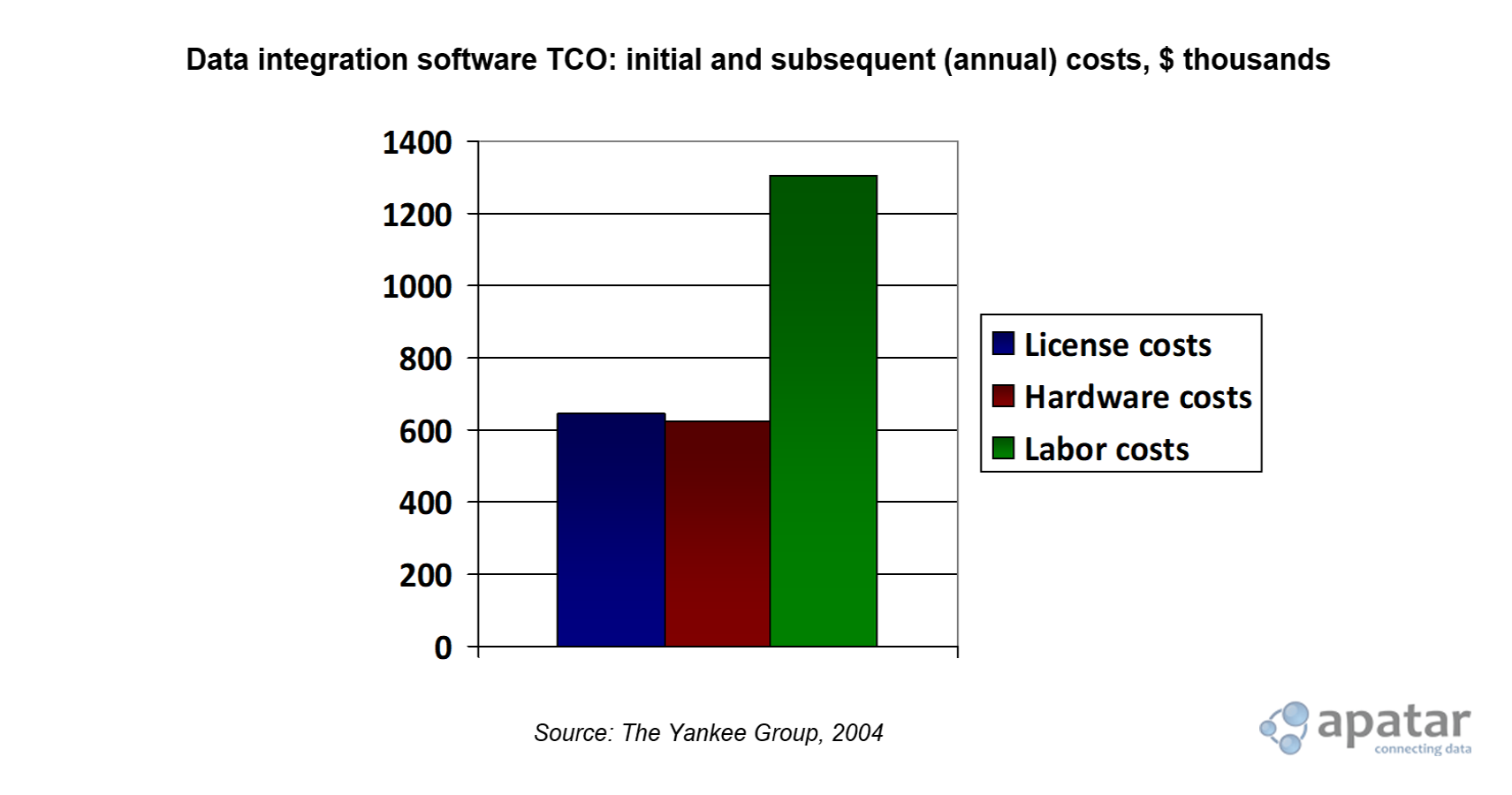 When it comes to labor costs, there are two main criteria:

Usually, open source can provide both, targeted at and supported by a large community that aims to consistently enhance the development. On the other hand, when choosing a proprietary solution, it is important to keep in mind that while many companies tend to underestimate TCO, for every dollar spent on data integration software, enterprises spend $6 more on subsequent implementation and support.

Thousands of companies worldwide entrust their enterprises to open-source solutions such as Linux and MySQL, including such industry leaders as Yahoo!, Google, Cisco, Panasonic, Alcatel-Lucent, Nokia, Associated Press, and many others. Just ten years ago, using open source might have seemed inappropriate for a big company’s ideology. Now that the benefits of freely distributed software have become more evident than ever and an abundance of such products have appeared in the market, more and more companies are going open source.

“Over the past few years, open source has become the technology we consider when there’s something we need,” says Jeremy Zawodny, a member of Yahoo!’s technology development team. “When I joined Yahoo!, the data-management part of that system was crude and written internally, and one of the first things I did was replace that with MySQL,” Zawodny says. 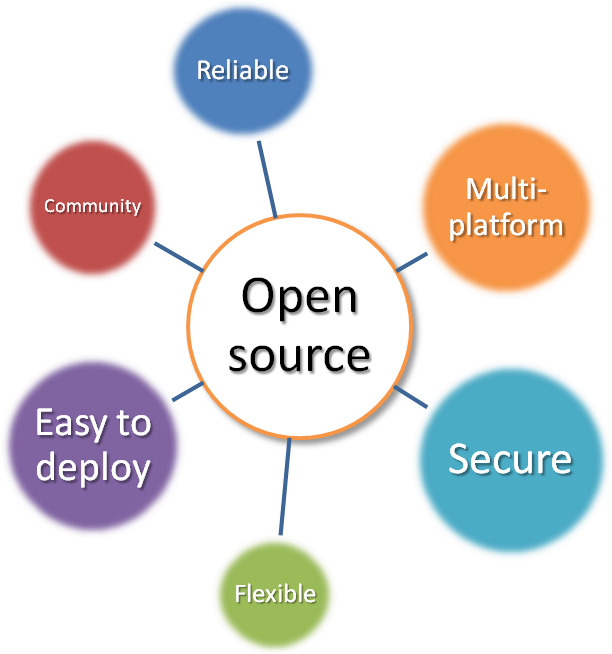 Open-source data integration is no exception. Freely available solutions are doubly beneficial, bringing the license cost down to the minimum and enabling companies to save dramatic amounts on maintenance. This is why organizations such as Continental Airlines, NASA, AXA, Fidelity, etc. rely on open source when it comes to integrating their data. But is it all only about money?

In truth, open source is not only good in terms of saving money. It also has a number of further advantages over traditional software:

It certainly looks as if the tendency of major companies to switch over to open source is not just to stay, but is a turning into a quiet revolution in the software market. The practical benefits of using open source often exceed expectations. And as many enterprises have already verified that for themselves, even more companies are following in their steps.

Financially, for any open-source convert, the advantages of going open source over staying with proprietary software are irrefutable.

NASA’s Acquisition Internet Service (NAIS), which has grown vital to the agency’s business, is managing large acquisitions online with the world’s most popular open-source database MySQL.

When their previous database vendor decided to restructure its license program, NASA was faced with fees that would cost more than twice their total annual budget for a simple upgrade, according to Dwight Clark, NASA Systems Analyst. Switching to MySQL helped NASA resolve the issue, saving over $4 million per year. Furthermore, using MySQL turned out to be beneficial in a number of unexpected ways, providing better reliability, productivity, and slashed support costs. 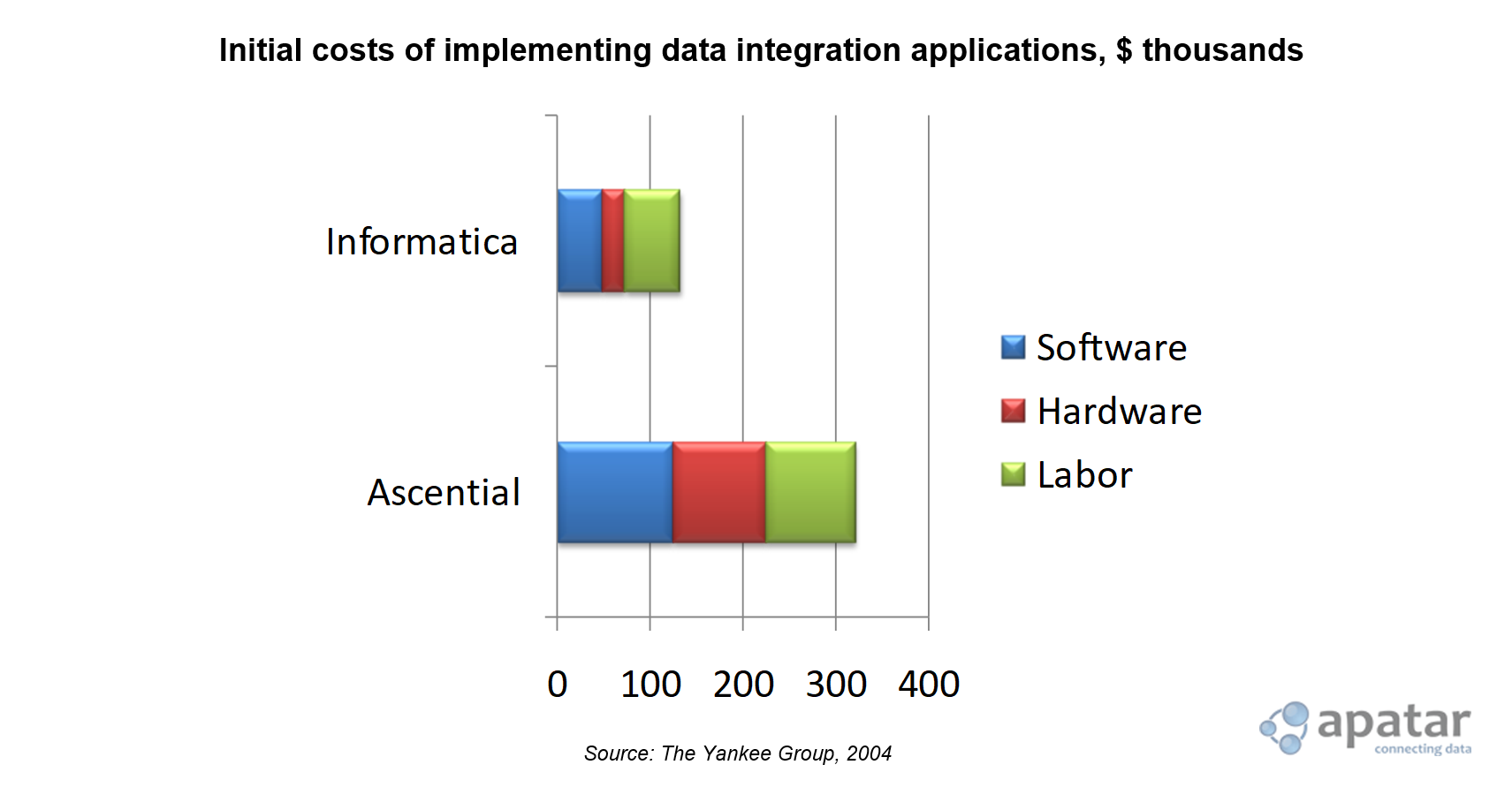 The ultimate open-source office application suite OpenOffice.org is used by 14% of large enterprises worldwide, including the French Gendarmerie, Bristol City Council, and Singapore’s Ministry of Defense. General Brachet, the French gendarmerie’s head of IT, says using open-source products helps the police save millions of Euros per year.

According to Netcraft, the open-source project, Apache has been the #1 HTTP server on the Internet for more than 12 years now, and it is recognized as such by Hewlett-Packard, Adobe, and Apple, to name just a few. This has to be because of the extreme economy it provides, as, according to research conducted by TechRepublic, enterprises can save about 60%–90% with Apache, depending on which of the popular proprietary competitors it is compared with.

Open-source ETL and data integration solutions can save money in a number of areas. The key areas of economy open source provides are:

One of the open-source tools that can help to cut down data integration costs is Apatar, an open-source ETL project. A response to the overwhelming demand by the companies dealing with business information scattered across distinct applications, Apatar is distributed under open-source GNU General Public License (GPL 2.0).

100% Java-based, Apatar is platform-independent and runs on Windows, Linux, and Mac OS. With the source code included, the solution is easily customizable. 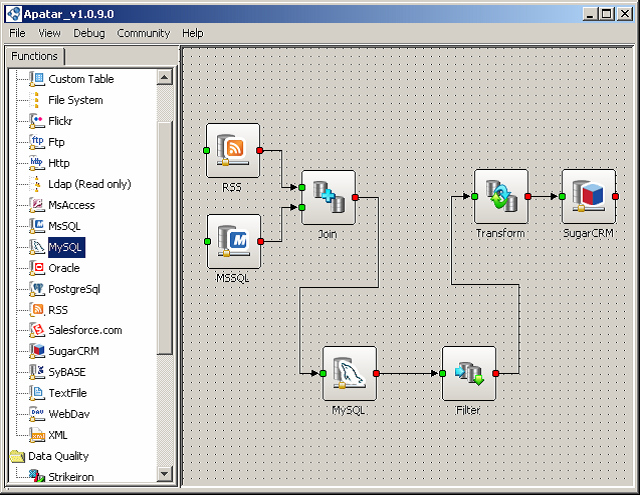 Making it possible to accomplish integration of virtually all levels of complexity, Apatar requires no coding skills. Users can drag-and-drop data between databases and applications using a visual mapping interface. This helps to save time and effort, which results in lower labor costs.

Data-integration jobs created with Apatar (called DataMaps) can be stored on your local drive, which makes subsequent reuse possible. Saved DataMaps can be shared via Apatarforge.org, Apatar DataMap Repository, hosting hundreds of ready-to-go DataMaps for a variety of situations. Before creating their own DataMap, you might want to check if there is a ready one at the DataMap Repository, since one of 5,000+ Apatar users could have encountered the same task as you and posted up a solution.

Not only does Apatar integrate data, it also helps improve its quality. By means of such integrated data verification services as StrikeIron US Address Verification, StrikeIron Email Verification, CDYNE Death Index, and others, Apatar can automatically filter outdated and invalid data. 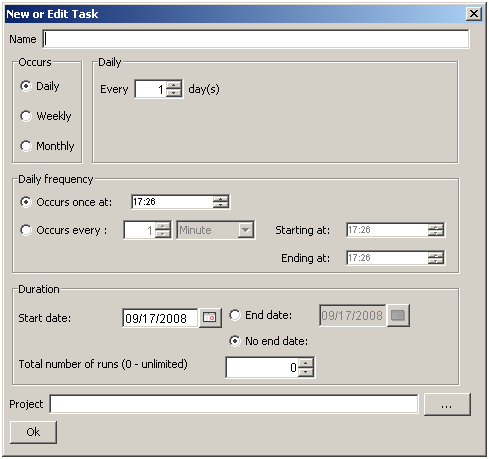 “I was impressed by how easy it is to use this tool and to obtain results quickly. The lack of knowledge on how to perform some specific functions was rapidly solved within the forum.” —Fabio Pifferini, Internal SAP Consultant

Below, you can find some useful tips to consider when choosing an open-source product.

This way, by using open-source technologies, companies can save a significant amount of their data integration budgets. Still, by following these recommendations, one can make sure that the ETL processes stay as mature as with proprietary DI tools.

The article was written by Michael Fedotov, Alex Khizhniak, and Renat Khasanshyn.

Data Federation vs. Data Warehousing vs. Data Integration
Next

Altoros Has Joined a Hi-Tech Park in Eastern Europe