GE to Sell Predix? What’s Happening, Why, and Who’ll Get It?

by Roger StrukhoffAugust 29, 2018
It looks certain that GE is going to divest itself of Predix soon. This presents an opportunity for a few companies and the community.

Whither Predix—is it history for GE?

Well, Prince, so Predix and APM are just portfolio assets of GE.

The opening line of Tolstoy’s War and Peace will seem an appropriate allusion to those of us who have put significant stock in the potential of Predix and its siblings to transform the industry and the world, only to realize they were just parts of a portfolio, no more special than any other.

This observation comes in the wake of conventional wisdom that GE is going to divest itself of Predix, along with its Asset Performance Management, Manufacturing Execution Systems, and the ServiceMax field service solution. 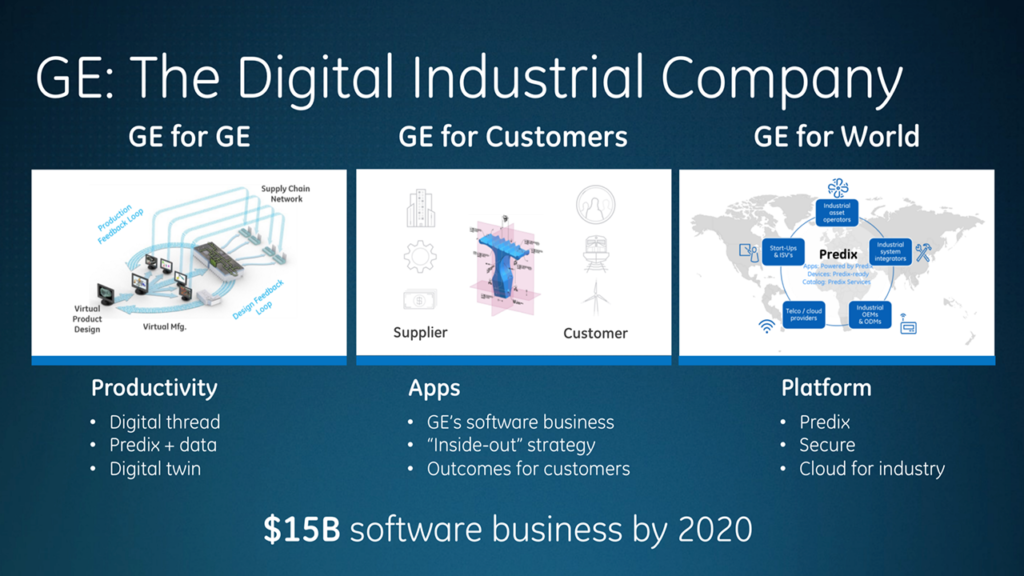 Predix has been a key part of this push. It integrates data analytics with Cloud Foundry to create a platform designed for high-end manufacturing. GE’s archetypal case for it is with the company’s jet engines, a business in which GE competes in spirited fashion with Rolls-Royce Motor Cars Ltd and Pratt & Whitney for global dominance.

By collecting half a terabyte of data per flight, Predix enables its users to develop vast and deep new data lakes to be plumbed for short-term telemetry reports, mid-term performance and maintenance issues and to uncover very long-term dynamics that in the past may have looked like anomalies. It also enables the creation of digital twins, a breakthrough concept that promises new wonders.

In the recent years, a number of analytical services powered by artificial intelligence (AI) and machine learning were also developed under the Predix catalog.

I’ve read a lot about Jeffrey Immelt and have listened to a recent interview with him by David Rubinstein on Bloomberg TV. His main focus during his years as CEO (2001–2017) was to shift GE’s emphasis from that of Jack Welch (chairman and CEO of the company between 1981 and 2001) on having all GE divisions be either #1 or #2 in their markets, to focusing on industries that he thought had the best long-term growth potential.

This led selling off most of the big cash cow known as GE Capital, for example. But, following the logic of seeking high-growth markets, it looks like AI by itself isn’t really a discrete market. Does AI have long-term potential as a separate market? And if so, where would Predix fit in it? 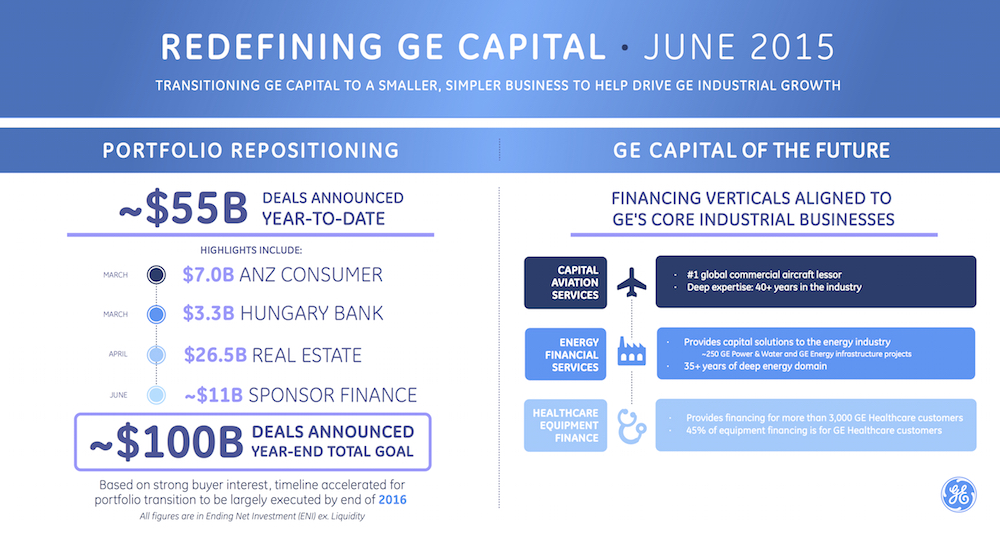 Furthermore, the existing business problem for GE with Predix seems to be that its existing jet-engine customers (and the airlines who buy these engines) won’t pay a premium for the added value that Predix may provide. Instead, the software became just another feature and did not create new revenue. One can see a further difficulty in allowing the software division to sell Predix to other engine manufacturers. In any case, the situation is now one for current CEO John Flannery (who assumed the title in August 2017) to address.

Who would buy Predix?

Pivotal seems an obvious candidate as the new Predix owner. The company is still bleeding money (at the rate of about one-third of its revenue, no less), yet has established a nice market capitalization of around $6.7 billion since an IPO in March offered up about 16% of the company to the public. GE still owns about 6% of Pivotal, coincidentally. Dell still owns 70% of it and controls more than 90% of its voting power.

Microsoft recently acquired GitHub in a surprise transaction, and has emerged under CEO Satya Nadella as a cloud-computing heavyweight. Would adding some analytics and AI help it fight, say, IBM and its Watson platform?

Amazon and Google emerge as valid suitors if we follow the logic of cloud computing with AI, although I imagine that Google’s original development and continued interest in TensorFlow would work against its management wanting to buy Predix.

Maybe Larry Ellison, now that he has firmly placed a bet on the cloud with Oracle Cloud, would want Predix. Larry has bought various and sundry things over the years and doesn’t like to be threatened by viable competition.

Meanwhile, a couple of trillion dollars or so of private equity are sitting around, always on the lookout for new opportunities, and one could imagine some of that being applied to buy Predix. But the fundamental questions would apply here, as well: is there such a thing as an AI market, and if so, what role and market share should belong to a successful Predix?

What is Predix worth?

This is a difficult question, because there is not a well-established (or well-known) revenue stream for Predix, or the certainty of a true “AI market” that stands by itself. Also, Predix is not a doughty little startup that can dazzle investor eyes with mutli-quadrillion-dollar futures. Rather, it is a big, heavy division within a big, heavy company. It is not something that a small company could take on, in the absence of a unique genius (who, of course, may be out there). So, no speculation from me here!

What about the community?

To its credit, GE helped create and build the Predix community early on. There are 140+ Predix developers Github repos and many dedicated influencers. 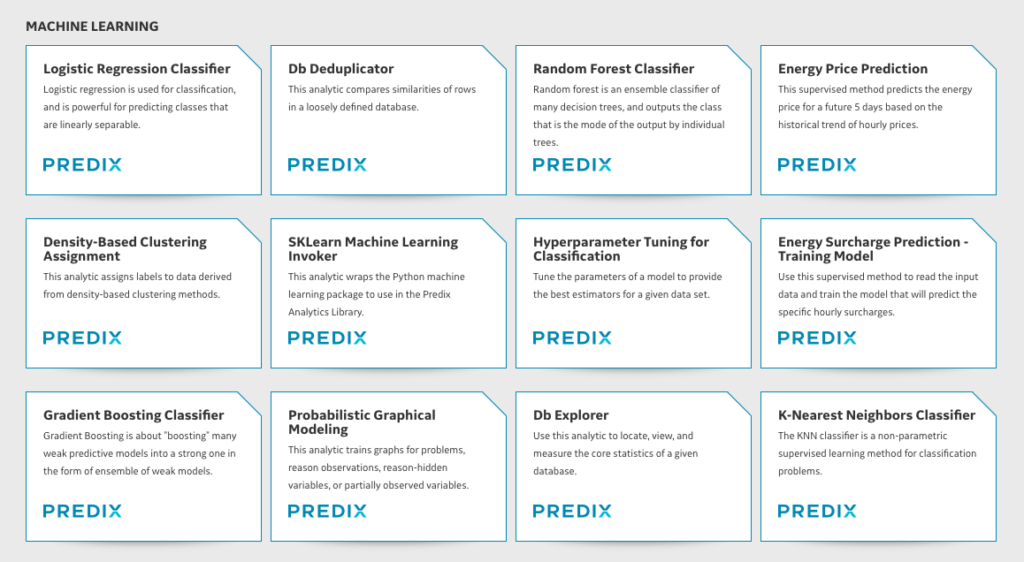 So, what if GE simply decides to throw Predix completely into an open-source foundation and let destiny take over? The Linux Foundation, which already counts Cloud Foundry in its stable of open-source software, would be an obvious suitor in this scenario.

This, to me, is the most likable scenario. It would be great to have enthusiastic developers from around the world hacking at Predix for things thought of and unthought of. This scenario’s likability has zero correlation with the possibility of it happening, although I must note that Tolstoy believed in a certain inevitability of events based on the actions of the many rather than the few. We should know the next chapter in the Predix story soon.

DataOps: The Challenges of Operating a Machine Learning Model
Next