by Roger StrukhoffMay 19, 2016
Many trillions of dollars are going to be affected soon by what's going on now with blockchain discussions, initiatives, and fights. A recent Hyperledger face-to-face meeting in the NYC area capped an intense week.

If only that’s where it ended. If only.

If you provide electricity, blockchain threatens to disrupt your world. The same holds true for any business that has transaction—in other words, any business. It also threatens to bring new levels of transparency to government at all levels.

This is the backdrop of a recent, fascinating week in New York that was centered around blockchain. A Hyperledger meetup, a competitive hackathon, a three-day conference called Consensus 2016, and a two-day Hyperledger Face-to-Face (F2F) meeting to close out the week provided enough technical discussion and subsumed tension to fry the greatest of minds and fray the steeliest of nerves. 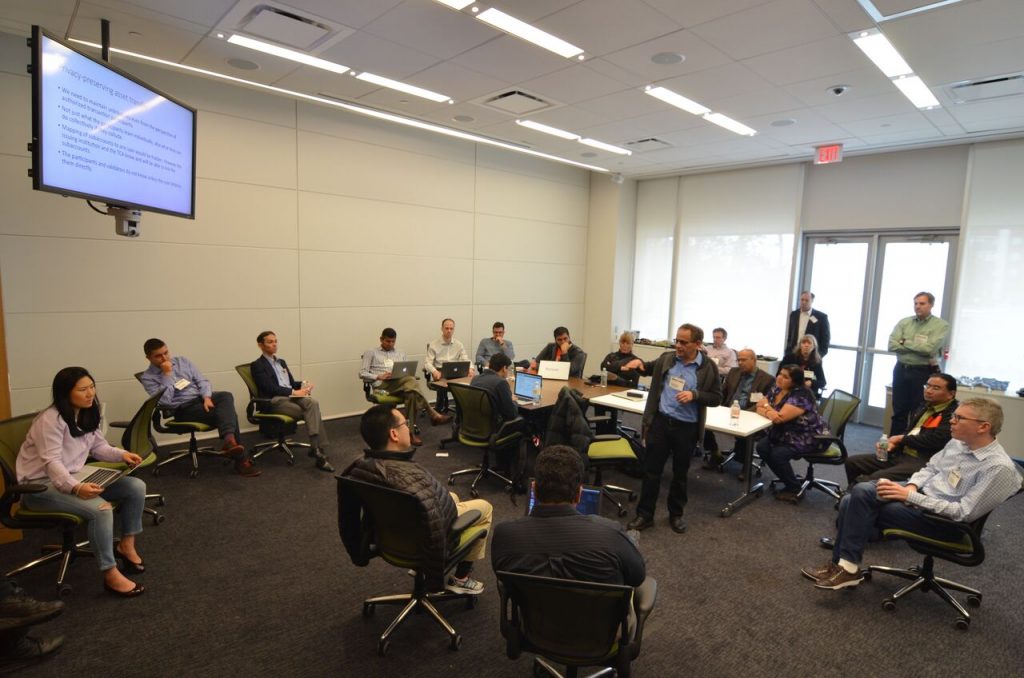 Where to start? I’ll do a reverse chronology here, and summarize the F2F meeting, as it forms the crux of the matter. I’ll then post subsequent, separate reports on the other events of the week. 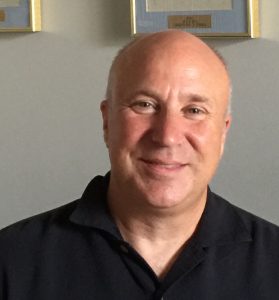 The F2F meeting was held May 5–6 at DTCC headquarters in Jersey City, NJ, in an area that’s seen a marvelous transformation in the past few years from a neglected waterfront to a bustling, glimmering business/residential district).

Dozens of key people from technology providers IBM, Intel, Digital Asset Holdings (DAH), and Blockstream attended, as well as key potential blockchain adopters from Citibank, JP Morgan, and others. The meeting was formally headed by Christopher Ferris, an IBM Distinguished Engineer who sits at the head of the Hyperledger Project’s Technical Steering Committee (TSC).

Abstracted to a single phrase, here’s what transpired: Lots of talk, not much progress.

The Hyperledger Project should be viewed within the context of several activities in the bitcoin/cryptocurrency/blockchain space. To borrow a phrase from Facebook, it’s complicated.

The relationship between IBM and backers of the Ethereum project seems especially so. IBM’s Open Blockchain (OBC) technology forms the keystone of the Hyperledger blockchain effort, and Ethereum might be considered to be a direct competitor to it. In this spirit, Altoros organized a “Hyperledger vs. Ethereum” meetup in New York prior to the F2F meeting—I’ll report on that soon.

OBC and Hyperledger (so far) employ the “proof-of-work” (PoW) scheme pioneered by Bitcoin, while Ethereum employs a dramatically different idea called “proof-of-stake” (PoS). In a PoW scheme, third parties receive a reward (a bitcoin or transaction fee) for validating a specific blockchain transaction. In Ethereum’s PoS scheme, validators submit deposits (e.g., get a stake in the game) and lose those deposits if they try to verify false transactions or other mischief.

A third process, called proof-of-elapsed-time (PoET, doncha know it) has been proposed by Intel and incubated by the Hyperledger project.

And, oh yes, the R3 consortium is apparently blazing its own blockchain trail with the backing of 40 banks and is seeking 200 million dollars (Austin Powers reference for you kids in the audience) from investors.

R3 also recently said it has moved “beyond” blockchain.

from R3 sits on the Hyperledger Project TSC, illustrating in miniature an overall portrait of companies and consortia hedging their bets (an appropriate Wall Street metaphor) while pursuing their own interests.

A bit about Ethereum

Ethereum is an open-source project as well, represented by the Ethereum Foundation and one of the technology’s key developers, Consensys. 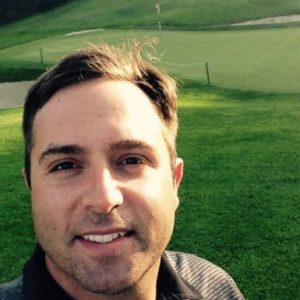 The Foundation is based in Zug, Switzerland. It not only touts a “free, decentralized, open future” (as according to its blog), but also promises that with this technology you can “build your own country with an unchangeable constitution (and) a better delegative democracy.” No wonder establishment types get either a deer-in-the-headlights or panties-in-a-bunch look when discussing this stuff.

“You can build your own country with an unchangeable constitution…” —Source: www.ethereum.org

Consensys (a portmanteau of “Consensus Systems”) describes itself as “a venture production studio building decentralized applications and various developer and end-user tools for blockchain ecosystems, focusing primarily on Ethereum.”

Consensys is headquartered not somewhere in the Alpine foothills but in Brooklyn. Prominent at the F2F meeting were Andrew Keys (listed as the company’s business interactions exec) and Joseph Chow, a consulting engineer, talked about Ethereum’s structure and processes during the meeting, and assured representatives from IBM they were there “only to listen and learn.”

Ethereum wunderkind Vitalik Buterin also made an appearance, discussing some technical differences between blockchain approaches during a break in the formal sessions at the F2F meeting. 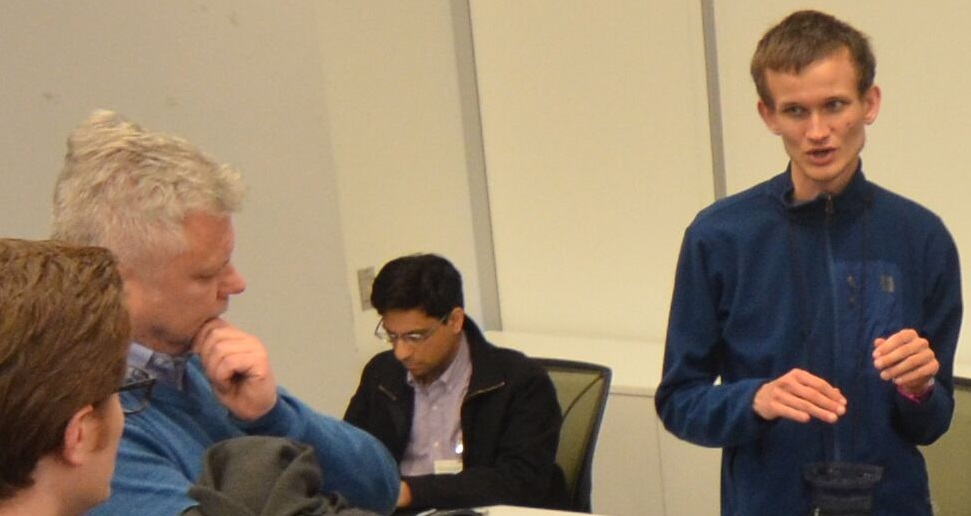 From the chasm to the crux

Bankers are not usually thought of as nihilists, although some of their excesses in the early years of this century did seem to almost bring down the entire global financial system.

The ones who are studying blockchain seriously would argue that the tamper-proof security, transparency, and disintermediation from inefficient (and non-tamper-proof) industry and government third parties can assure that such calamity won’t be repeated.But it’s clearly a chasmatic leap from mining bitcoins to ledgering complex packages of myriad asset types. This is the crux of their concern.

At the technical level, two big issues are now of high priority: architecture and identity.

Architecture was discussed at the previous F2F meeting. Discussions from that meeting have subsequently been incubated as Hyperledger Fabric.

Another wrinkle, referenced above, is the more recent incubation of Intel’s Sawtooth proposal. 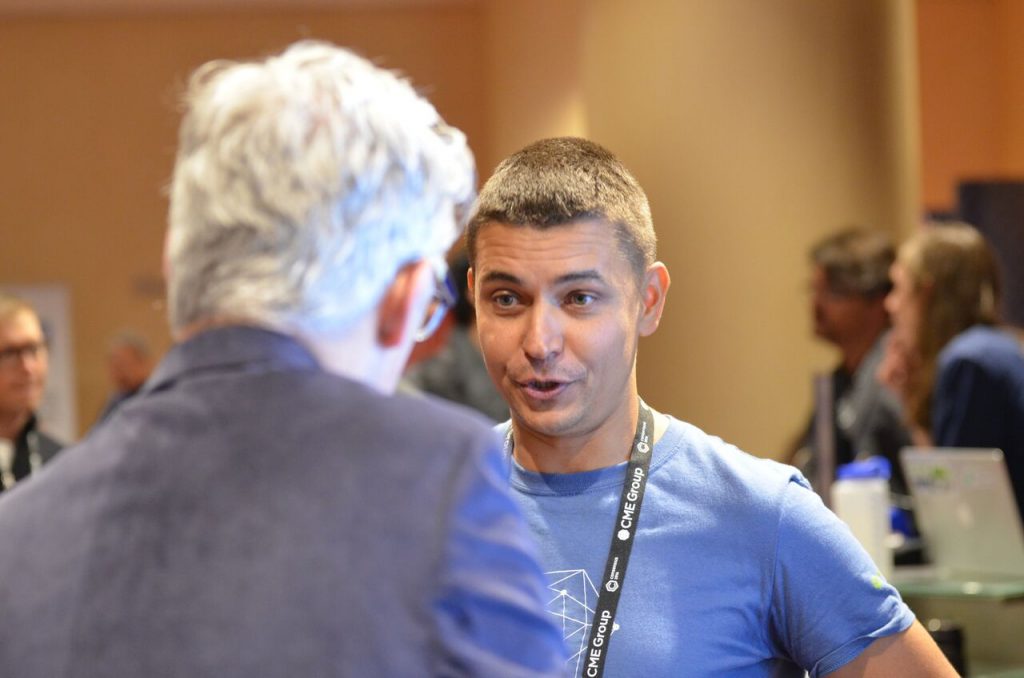 Oleg Abdrashitov is working to steer architecture and use case contributions

Oleg Abdrashitov, a systems architect with years and years of experience on Wall St., is working in conjunction with Altoros to help steer this discussion. Again, this is an open project, so potential submitters are being encouraged to speak up!

At the latest F2F meeting, Blockstream’s Christopher Allen led an Identity workgroup meeting. In this and other discussions, he offers up a 10-point synopsis of what’s important with identity:

Christopher has posted an expanded version of these 10 points on GitHub.

An Identity workgroup meeting at the F2F meeting got bogged down into a discussion of consensus versus validation, and where to put them in the stack. As a neutral observer, I grew tired of some of the arguments, as they prevented the group from diving into several schemata (or “substreams”) that Christopher offered up prior to the meeting.

A great deal of thought needs to go into analyzing the best way to proceed with Hyperledger in this area. I don’t view this as one of those areas where people can just say “it’s open, let’s fork it here as we please.” Perhaps future Identity meetings can make more progress.

A great, if tedious, resource for all this can be found on Slack.

Slack channels do provide a nice chronology of everyone’s thoughts—the tedium arrives with a multiplicity of channels and a constant stream of small-ball messages. Dig through this, though, and you’ll find many valuable comments and links to current, relevant documents.

We’re up to our (necks) in alligators

This is a dynamic, fluid situation, one in which any reports I post can become obsolete overnight. However, as John Prine once wrote, “I’m cold and I’m tired and I can’t stop coughin’ long enough to tell you all the news.” I’ll keep the copy coming to try to get everyone up to speed who wasn’t in New York.

We’re in a situation where everyone is up to their (necks) in alligators, making it tough to remember that the original job was to drain the swamp, with the uncompleted ur-task of figuring out the best way to drain it.

Maybe some enterprising soul can provide an appropriate T-shirt for the next F2F meeting (still to be scheduled). It might take the edge off of these trillion-dollar conversations.