by Carlo GutierrezApril 22, 2016
Tamás Blummer gives his take on Digital Asset Holdings' enterprise-ready blockchain server with a client API, which was recently contributed to the Hyperledger project.

“The system of ledgers is nothing new,” so says Tamás Blummer, Chief Ledger Architect at Digital Asset Holdings (DAH). During the presentation at a recent Hyperledger meetup in NYC, Tamás talked about his perspective on Hyperledger and provided an overview of Digital Asset’s contribution to the project.

The Hyperledger Project (HLP) is Linux Foundation’s collaborative project that aims to develop an open distributed ledger platform. (You can learn about how Hyperledger’s Technical Steering Committee works from our recap of the face-to-face HLP meeting.)

What needs to be automated?

According to Tamás, financial institutions have been using ledgers for quite some time and would most often be copied and reconciled through manual processes. These same processes are what keeps the financial system stable.

Tamás points out that the purpose of the HLP is to modernize and digitize the entire ledger system while also adding new technology to match evolving requirements.

The question implied by Tamás was, “What needs to be automated in a contract?”

Here, it’s implied that a contract is any business interaction within the ledger. He goes on to discuss a few key points in this area:

When it comes to the extent of automation, “Digital Assets is leaning more towards the first solution and for very practical reasons.” Being limited to simple automation allows the ledger to highlight some very important traits which include:

There’s a case to be made that simple contracts can also be smart contracts.

“It doesn’t mean that we don’t need or we don’t use smart contracts. It just means we are restricting ourselves at this very moment to very trivial things.”
—Tamás Blummer, Chief Ledger Architect, Digital Asset Holdings

Digital Asset’s contribution to the HLP

Currently designated as the “HLP-Candidate” by DAH, this contribution in intended to meet enterprise architecture requirements as seen by individuals who have decades of experience in the financial institution.

Some of the current key features include:

Tamás goes into more detail explaining the inner workings their HLP-Candidate. “We took the OBC framework that comes with a consensus protocol and storage for the blockchain and the broad state which is a side effect of the transaction. We put in a chain code that is nothing [more] than a wrapper around a modified modules from Blockstream with added features. On top of this stack, we added the API that Digital Asset’s uses to create its higher level stacks.” 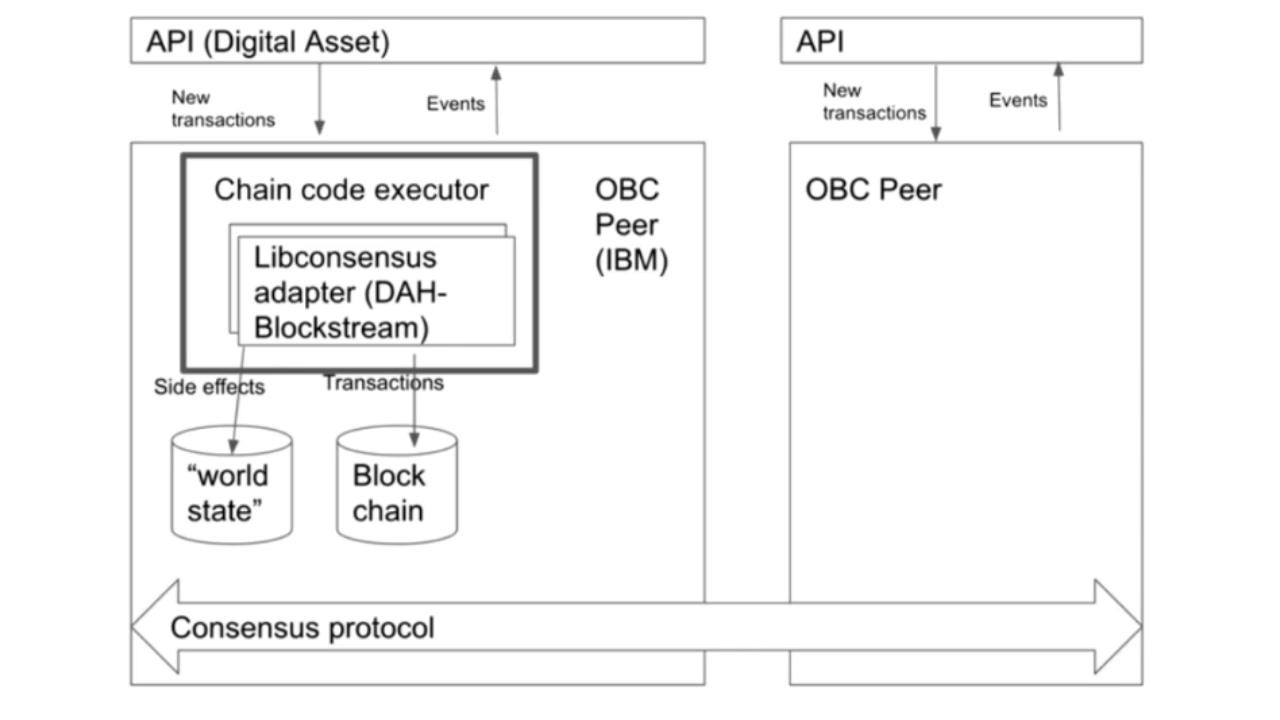 He follows up with a summary of DAH’s API, stating, “This API, if you think in ‘crypto-forensic’ terms, is implementing a very sophisticated wallet but not a single wallet. It gives you a very rich set of functions to do all kinds of wallets. It supports the creation of native assets.”

With the API explained, Tamás circles back to finish the overview. “We added this API on top of OBC blockchain and connect it such that we can push in transactions into OBC so you don’t need to use the RPC interface of OBC. You have a very nice Java interface that allows you to integrate with other applications and we extend the OBC so that it is able to pump out events and we suppress these events so you can use this to build a data warehousing application, you could build a cache, and a running index of OBC content.”

Details of the Hyperledger Project can be found on the official website. There are also a GitHub repo, Wiki, and Slack channel.

Tamás Blummer is an entrepreneur, a Quant software developer, a market risk manager, and a Bitcoin advocate. He designs and leads the implementation of Digital Asset Holdings’ distributed ledger, being also a member of the Technical Steering Committee at the Hyperledger Foundation. Prior to joining Digital Asset, Tamás built the Bitcoin mining control software at CoinTerra. He was the founder and CEO of Bits of Proof, a firm which constructed an enterprise-grade Bitcoin blockchain server. Tamás has also served as a VP at Deutsche Bank (where he ran the IT systems for global fixed income processing), VP at MSCI, and Executive Director at Morgan Stanley.