by Roger StrukhoffApril 21, 2016
Interest in the Hyperledger Project was intense over the initial, four-day technical face-to-face meeting in New York in early April. The Linux Foundation arranged the event, which was held at a JP Morgan Chase facility.

IBM Distinguished Engineer and CTO of Open Technology Christopher Ferris heads the Hyperledger Project’s Technical Steering Committee (TSC), which helped organize the F2F in New York. He led a TSC meeting at the conclusion of the F2F. 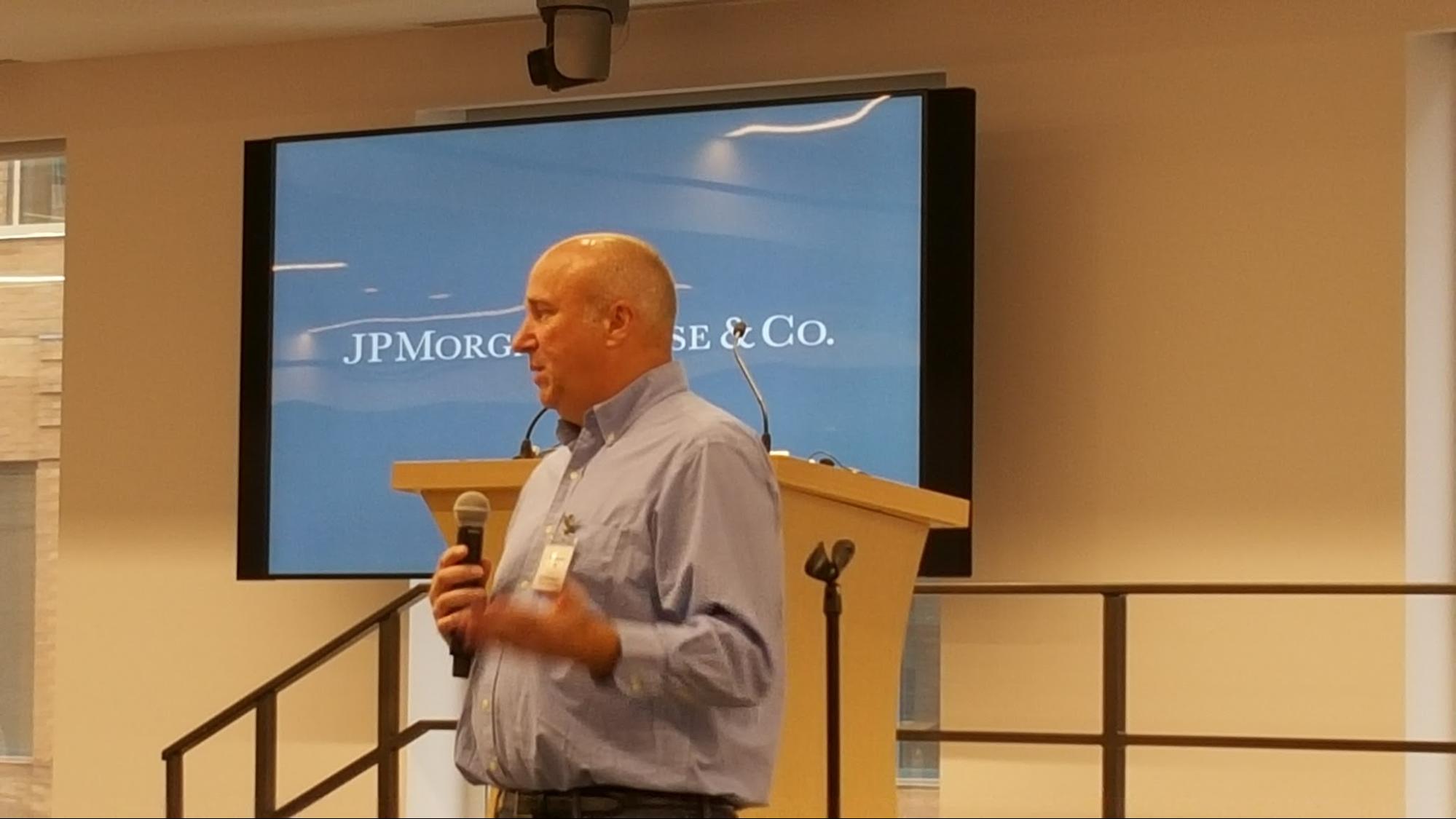 Once all participants had an opportunity to introduce themselves, the proceedings then began with Tamás Blummer, Chief Ledger Architect at DAH, making a presentation of their code base. This was followed by Binh Nguyen Senior Technical Staff Member, IBM who presented the IBM Open Blockchain (OBC) code base. Sheehan Anderson, Advisory Software Engineer for the Hyperledger Project at IBM, then introduced a few chaincode examples. With the introductions out of the way, Chris Ferris then presented a set of suggested experiments that the group might engage.

A few memorable areas of discussion emerged during the first day:

Accenture had a team there interested in the use of Hyperledger in tracking clinical results. 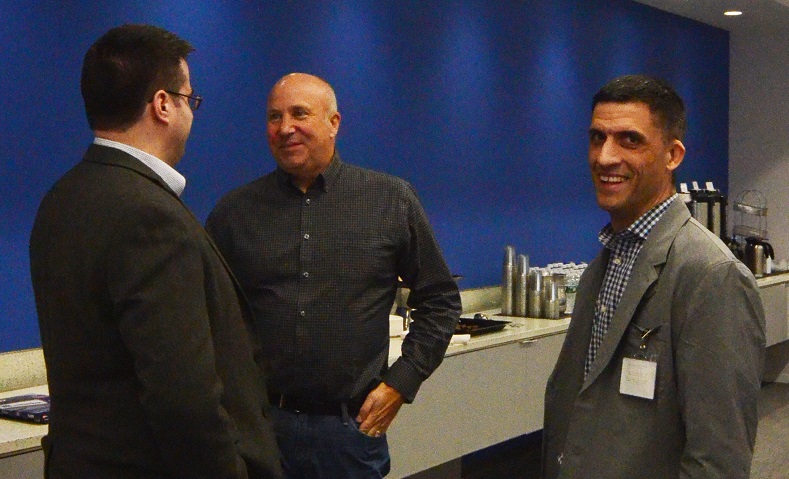 Four working groups were formed during the week:

Requirements and use cases
Led by Patrick Holmes (Intel)

For the first day this group was divided into two sub-groups. One focused on financial use cases, the other on non-financial.

All of the use cases need to be fleshed out to some degree, as pointed out by Renat Khasanshyn. Some simply list a title at this point.

Patrick Holmes noted that “we have to understand use cases that are of interest for real companies, create a requirements product based on them, and then adopt their blockchain project to these needs.” He said Intel’s implementation will be released to open source in two weeks.

The list of use cases to date can be found at here.

Specific requirements for Hyperledger implementation can be derived from detailed use cases. All agreed it’s now a priority to build upon the current work and develop them. 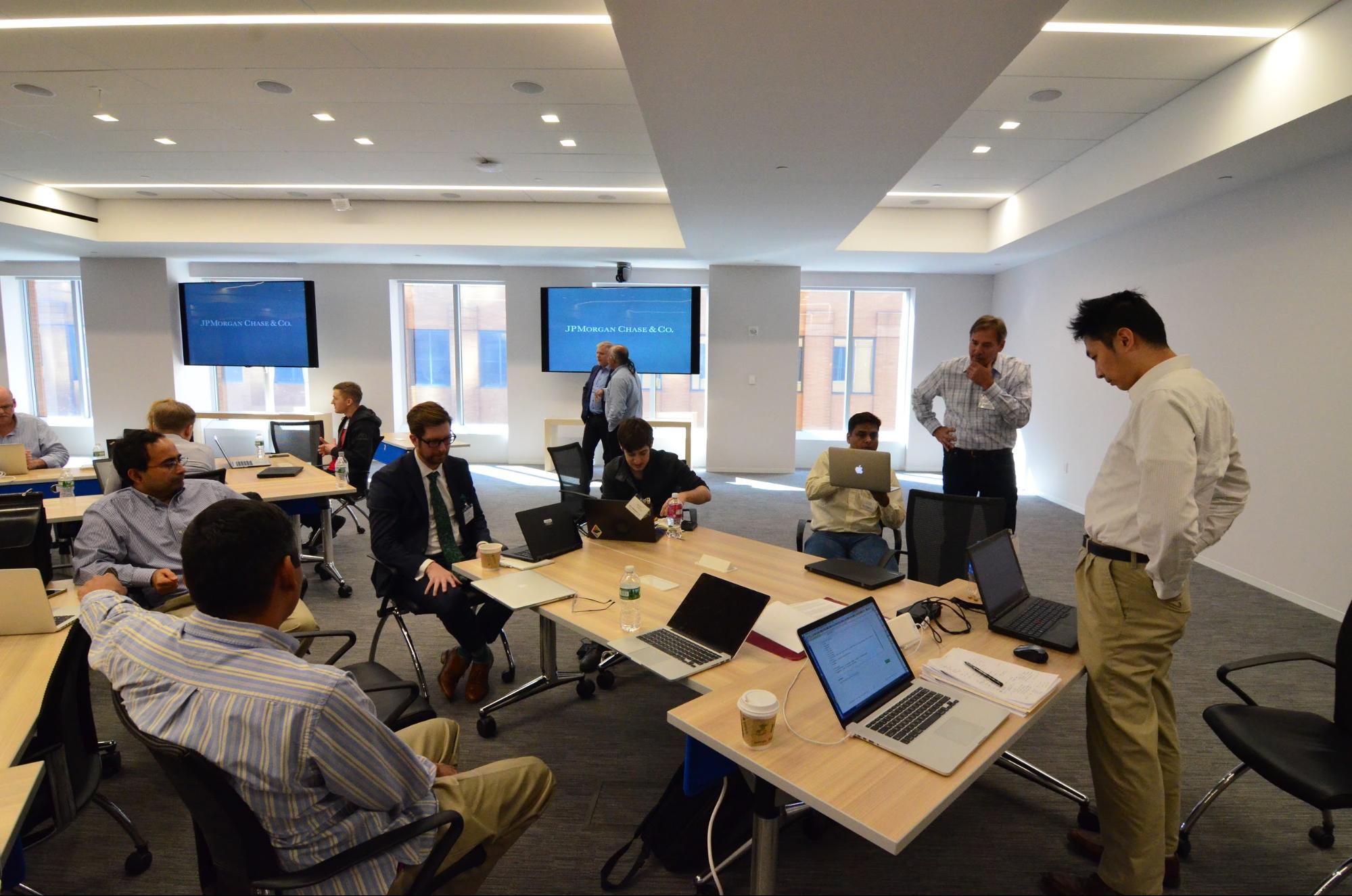 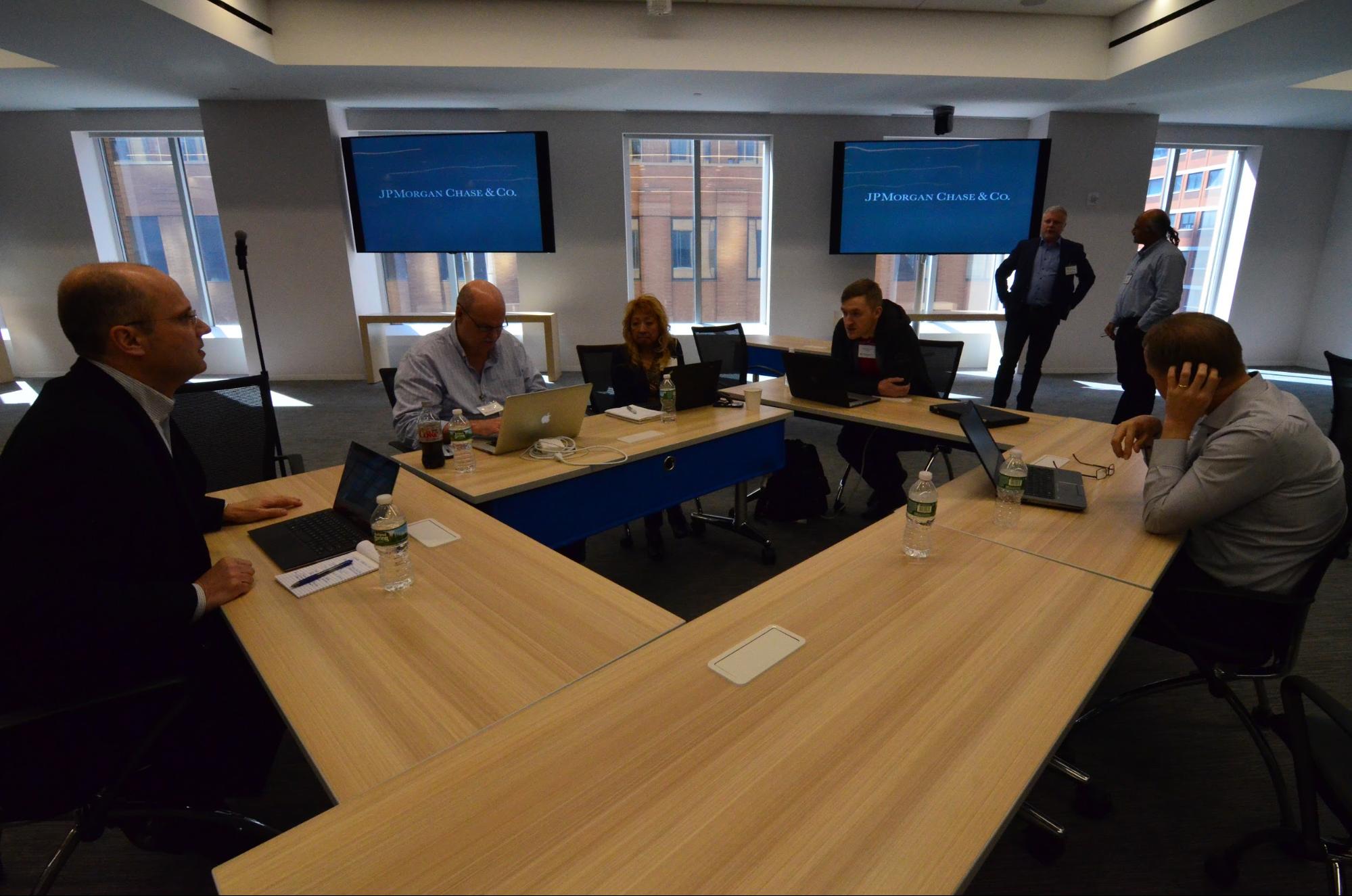 A fairly lengthy white paper that’s been repurposed from existing work by IBM on its Open Blockchain (OBC) technology was also presented in this context, and there is also a priority to make this paper uniquely describe what’s going on with Hyperledger.

One big question that the current version answers—and which will continue to be developed—is to answer why there is a need for a new fabric. 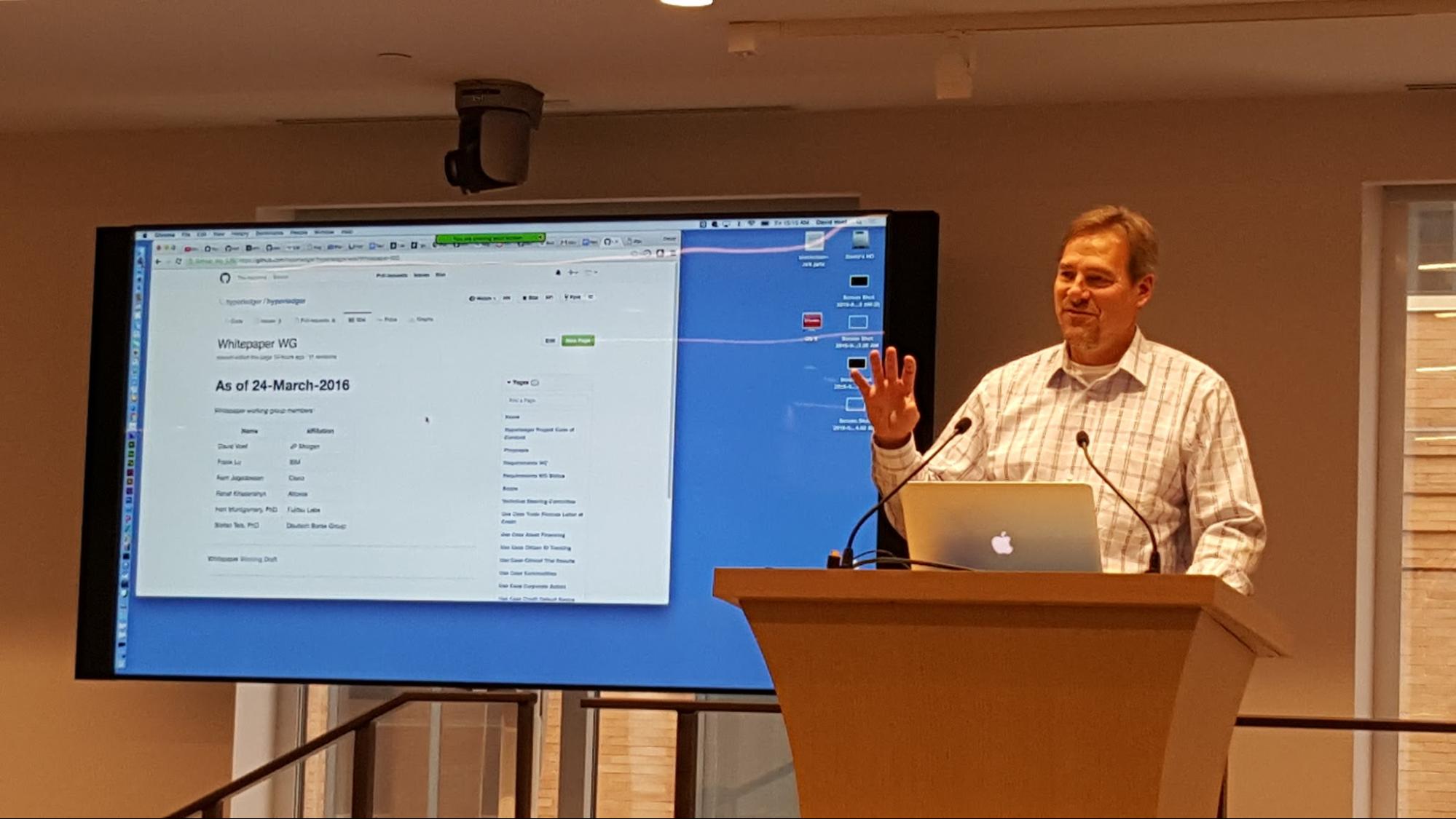 One important point is that “there are a lot of use cases where existing fabrics are not appropriate,” according to Dave. “[Today], we’re going to require a permissioned network,” he said, adding that “maybe this could evolve to include non-permissioned.”

The current working version of White Paper can be found here.

This team spent a good part of its first two days on environment configuration. For newcomers it can be a challenging task to deploy the environment without mistakes. But the end-result of this group’s efforts is an example of an application that will be helpful for new developers.

During his presentation on Day 4, Stan outlined the sample application: 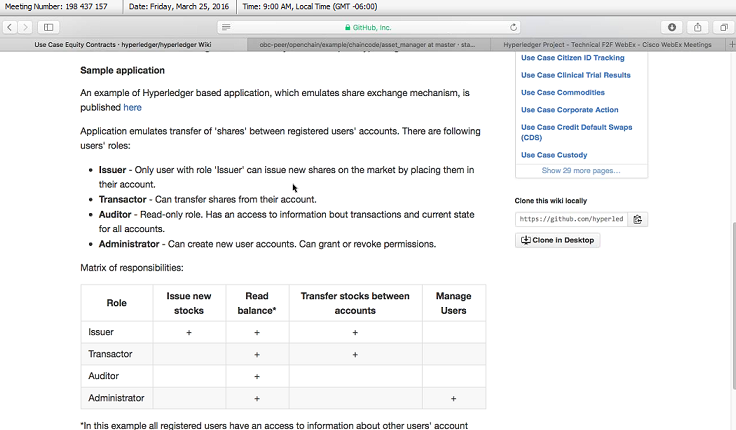 He also showed some of the initial code: 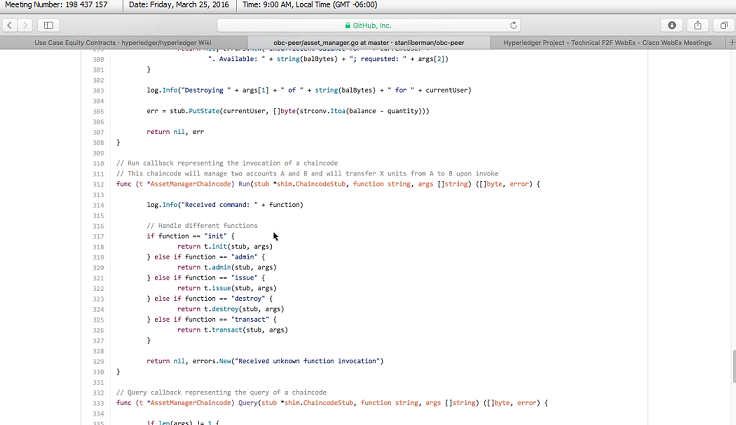 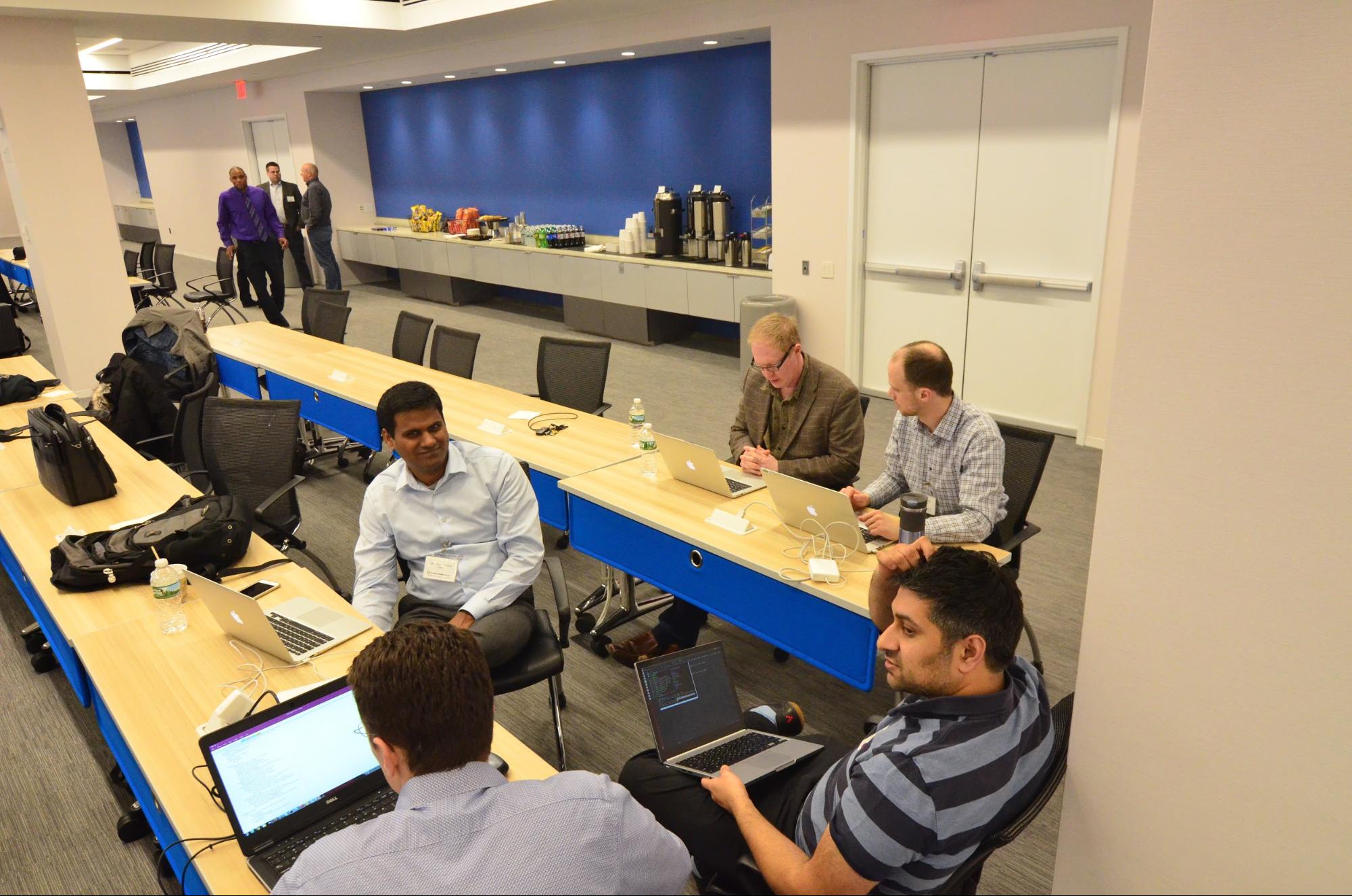 At work. Stan Liberman (on the far right) discusses the use case with Damien Briggs (on the far left)

The focus of Robert’s team was to integrate some redundant pieces found in the combination of all of the contributions, and how cutting the server-side of DAH’s contribution led to a more elegant solution. He first presented the combined structure, with its redundancy: 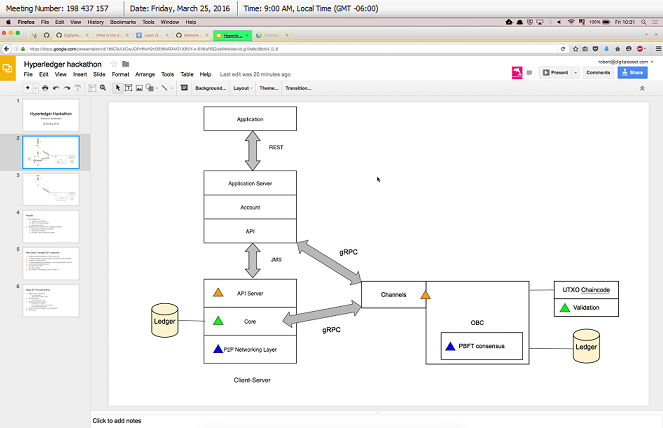 He then showed the updated product, which cut out front-end Blockstream code, and connected DAH front-end and IBM (OBC) back-end contributions: 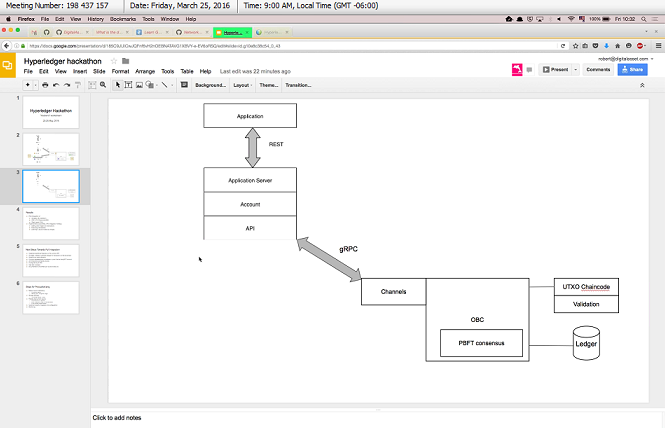 Robert then took the audience through a sample transaction. He showed the transaction being created… 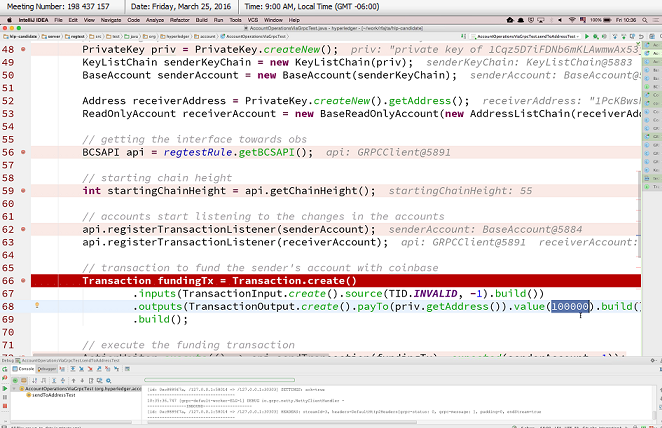 …then completed “with all the money wired and all the balances correct.” 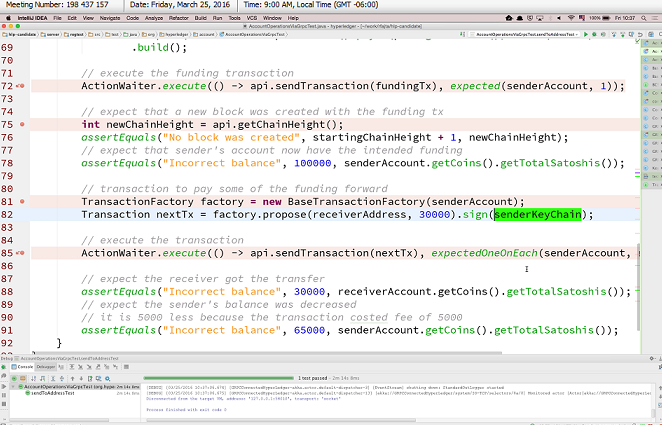 It was noted that the two working groups’ effort is just a POC at this point. Not all functions were implemented, and transactions in a final product must be not only performant but also prunable, as one of blockchain’s primary promises and advantages is that you can audit what’s on it. 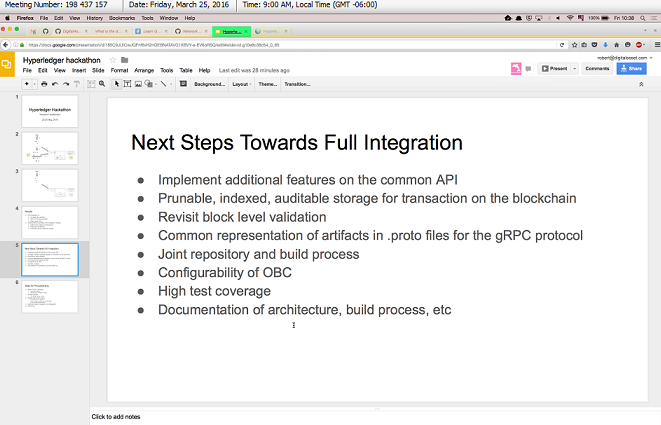 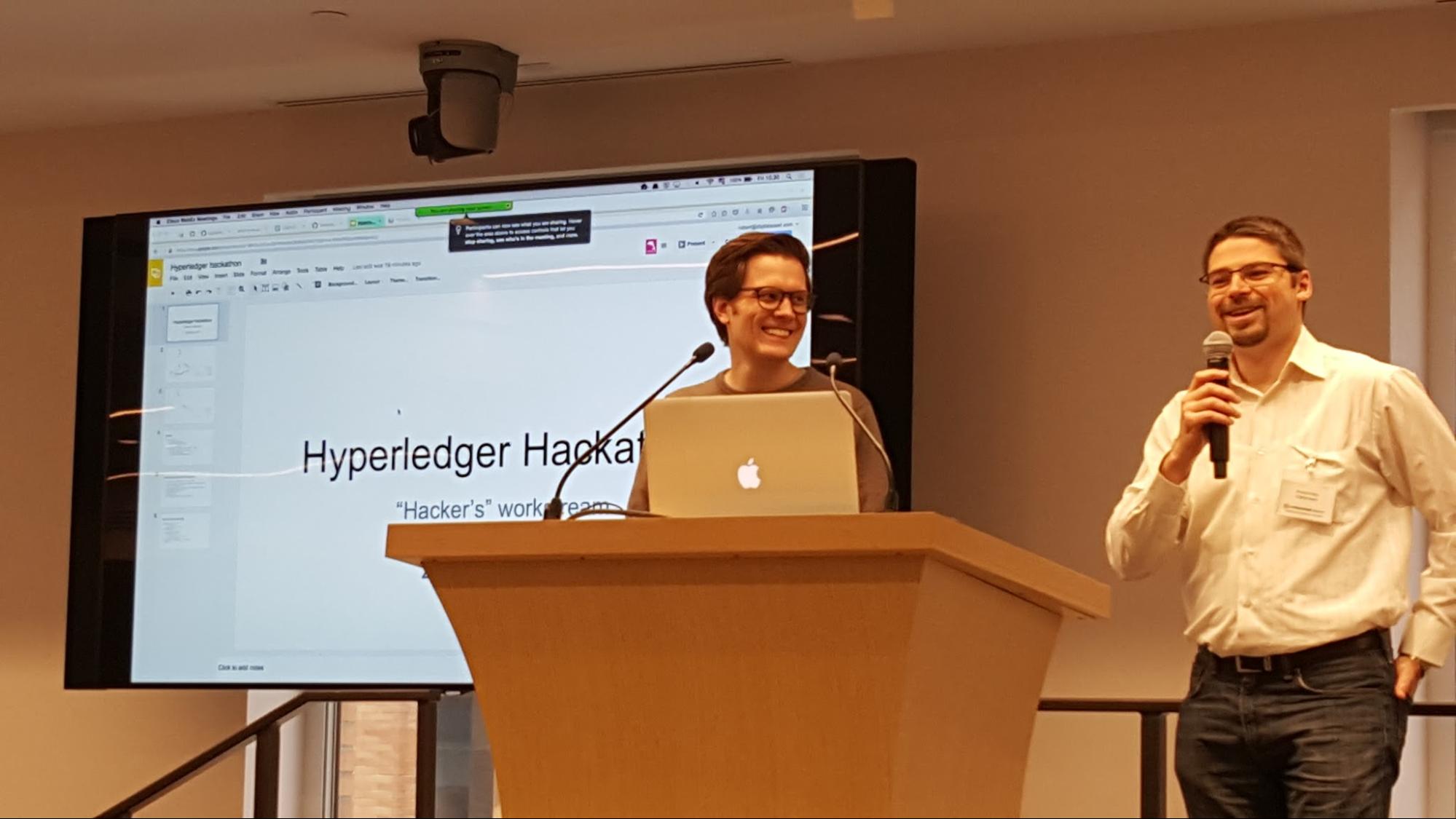 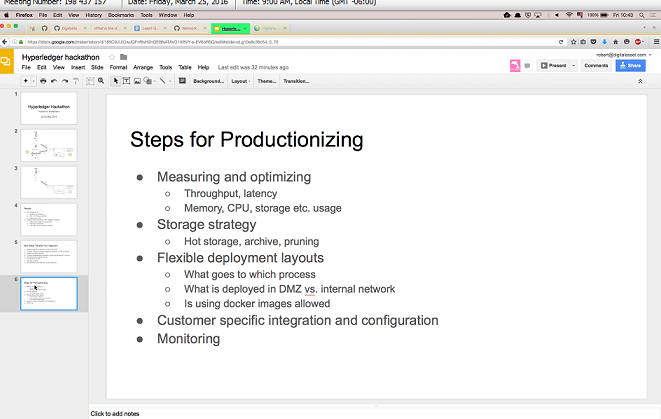 After note: team members ended up realizing that this work would have taken months instead of days if they had had to work remotely without face-to-face communication. The prototype is implemented in Java and it’s highly possible that some of modules will be rewritten in Go and included into project’s source code. Chris Ferris did note a high “pain in the [neck]” factor in rewriting to Go. 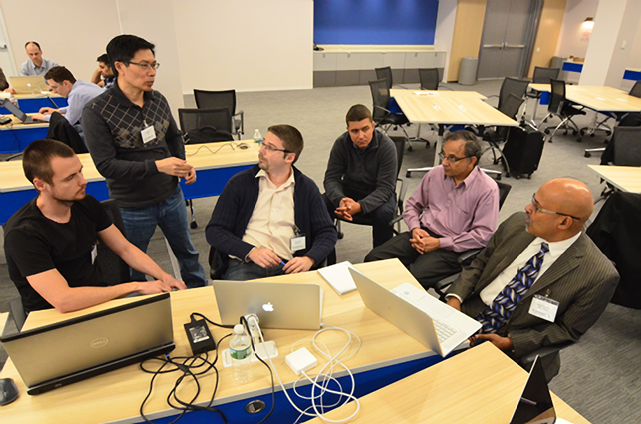 A team from IBM, DAH, and Altoros works on combining code. Group leader Robert Fajta is in yellow shirt in center.

For engineers and managers who are new to Hyperledger, the backdrop to this group’s work comes from proposed contributions to Hyperledger from IBM, DAH, and Blockstream:

Open Blockchain (OBC) is IBM’s contribution to the Hyperledger project. IBM describes it as “a low-level blockchain fabric that has been designed to meet the requirements of a variety of industry-focused use cases. It extends the learning of the pioneers in this field by addressing additional requirements needed to satisfy those broader industry use cases.”

Digital Asset Holdings (DAH) and Blockstream are the other two key Hyperledger contributors at this early stage. The latter two companies have made contributions similar to that of IBM, and were prominent at the F2F.

DAH describes its candidate contribution as “an enterprise ready blockchain server with a client API. HLP-Candidate has a modular architecture and configurable network architecture particularly designed to meet the needs of our financial services clients. HLP-Candidate implements an append-only log of financial transactions designed to be replicated at multiple organizations without centralized control. The goal of HLP-Candidate is to allow expansion of the data backbone concept to the multi-organization level.“

Blockstream is contributing the Elements Project, which it describes as “a modularized fork of the Bitcoin codebase that adds several major improvements. Elements are composable features that allow a blockchain’s attributes to be customized, including Confidential Transactions, Segregated Witnesses, and Deterministic Pegs. Sidechains are interoperable blockchains implementing atomic, cross-chain transactions using a choice of federated, permissioned, or decentralized consensus models.” 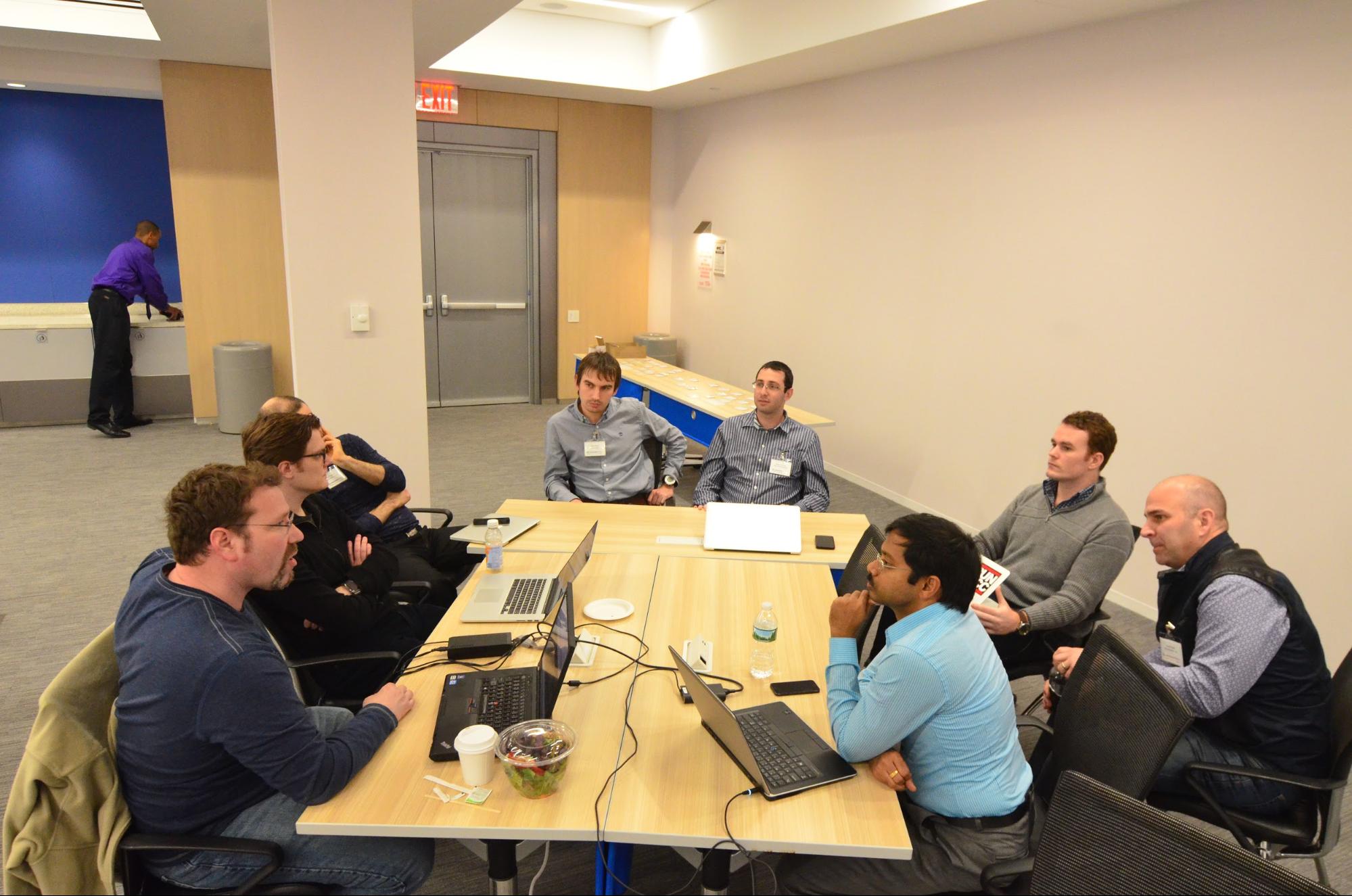 Combined team from IBM, DAH, and Blockstream and DTCC working the problem on Day 1

There was a seeming consensus during this meeting that blockchain within the Hyperledger Project will be incubated with a combination of contributions that have been made by IBM, Blockstream, and Digital Asset Holdings (DAH), as outlined by Robert in his presentation.

Mic Bowman of Intel voiced an objection to approving this at the meeting. Chris noted, “this is open source, so (people) can proceed however they want,” but he also stressed that he favored complete agreement before formalizing the path forward for this particular incubation.

F2F participants are encouraging as many companies and people as possible to participate in the Hyperledger Project.