by Alex Khizhniak, Volha Kurylionak, and Sophie TurolNovember 3, 2015
Didn’t get the chance to attend CF Summit in Berlin? No worries, read this recap to learn about the major announcements and session highlights.

Day one commenced with hands-on workshops on CF, BOSH, and microservices. The summit itself kicked off with keynotes from CF Foundation, SAP, Pivotal, and EMC. Almost all seats (out of 600+) were taken and it stayed that way throughout the day. 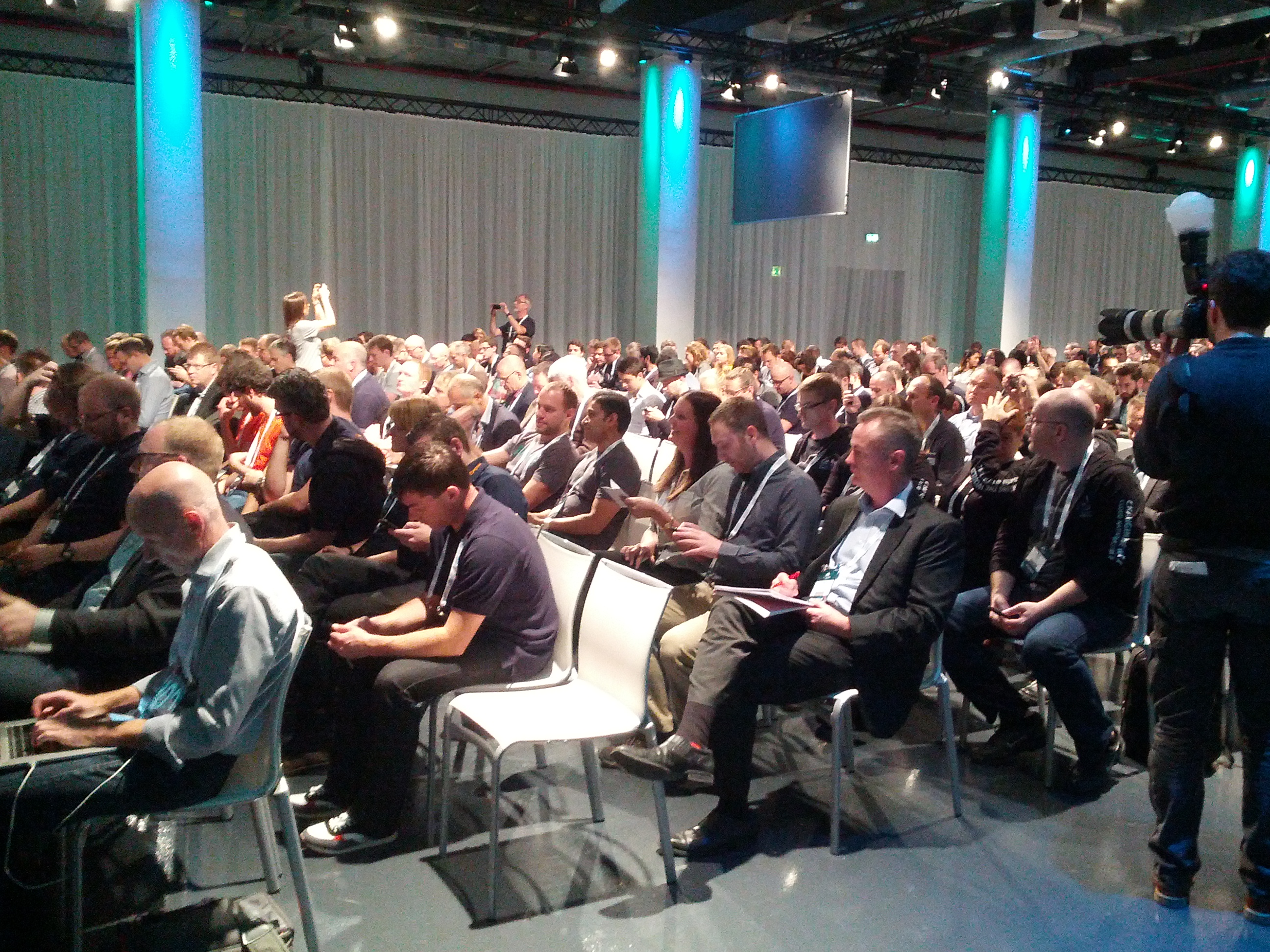 The main pieces of news were introduced by CF Foundation, Pivotal, SAP, and Microsoft.

The concept was tested on a broad audience across 7 countries (total of 734 people).

3) Microsoft announced general availability of the BOSH Cloud Provider Interface (CPI) for Azure. (Recently, we provided an overview of Microsoft’s initiative, summarizing what’s been done for the 2nd preview, how it works, high-level architecture, etc.)

4) SAP to take the project lead for OpenStack CPI starting in 2016; SUSE to collaborate with SAP on this activity.

The Making of a Cloud-native Platform

During the opening talk, Sam Ramji, CEO of the CF Foundation, spoke about how PaaS revolutionizes businesses, presented the new CF logo, and made a couple of small announcements.

Sam highlighted the importance of innovation, as since 2000, 52% of the Fortune 500 companies are no longer on the list. As in his previous talks, he urged enterprises to shift from the “waterscrumfall” approach—a situation when the CD part is missing in the CI–CD–CI pipeline. 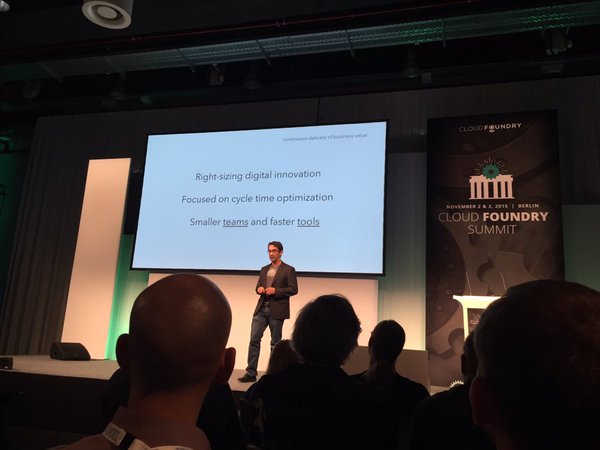 “Borrowing from Toyota’s lean approach, we are rightsizing the digital innovation.” —Sam Ramji

The Foundation is also working on certification for developers and CF software, so that users can be sure their apps are compatible with all CF-based systems. 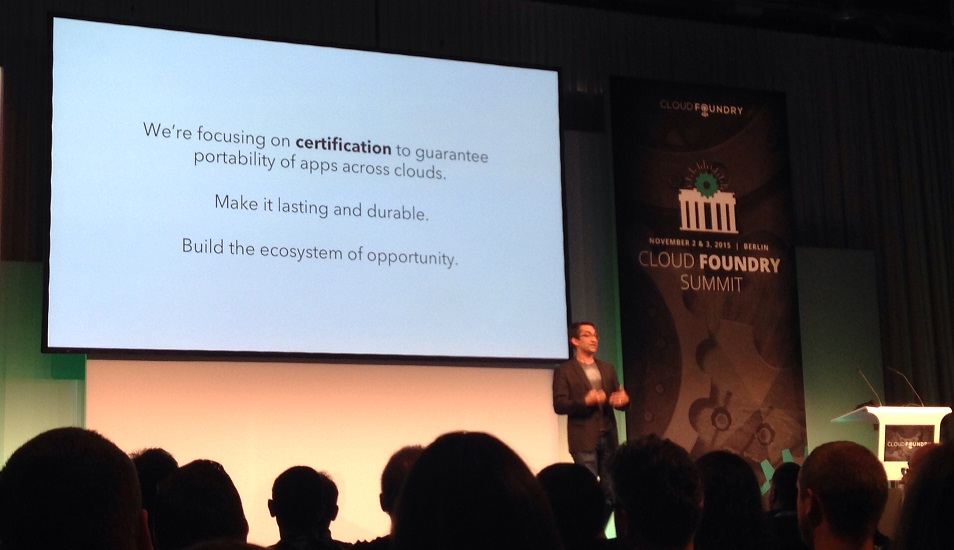 He also revealed some figures: for instance, 60% of Cloud Foundry deployments are on OpenStack. Finally, Sam elaborated on importance of sharing and confirmed that the foundation is planning to host three CF Summits per year: in USA, Europe, and Asia. 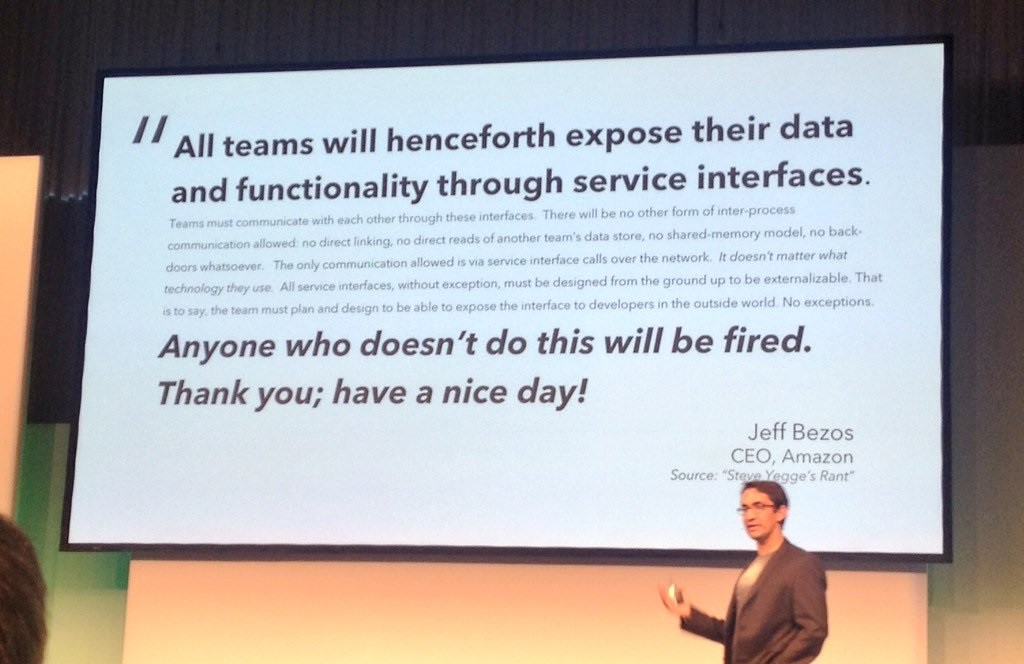 “The new baseline is sharing by default.” —Sam Ramji, the CF Foundation

Innovate Faster with a Cloud-enabled Enterprise

The talk by Dirk Basenach from SAP was on open-source cloud technologies in the enterprise and the benefits of cloud platforms, such as speed, better quality, low entry barriers, no vendor lock-ins, etc. 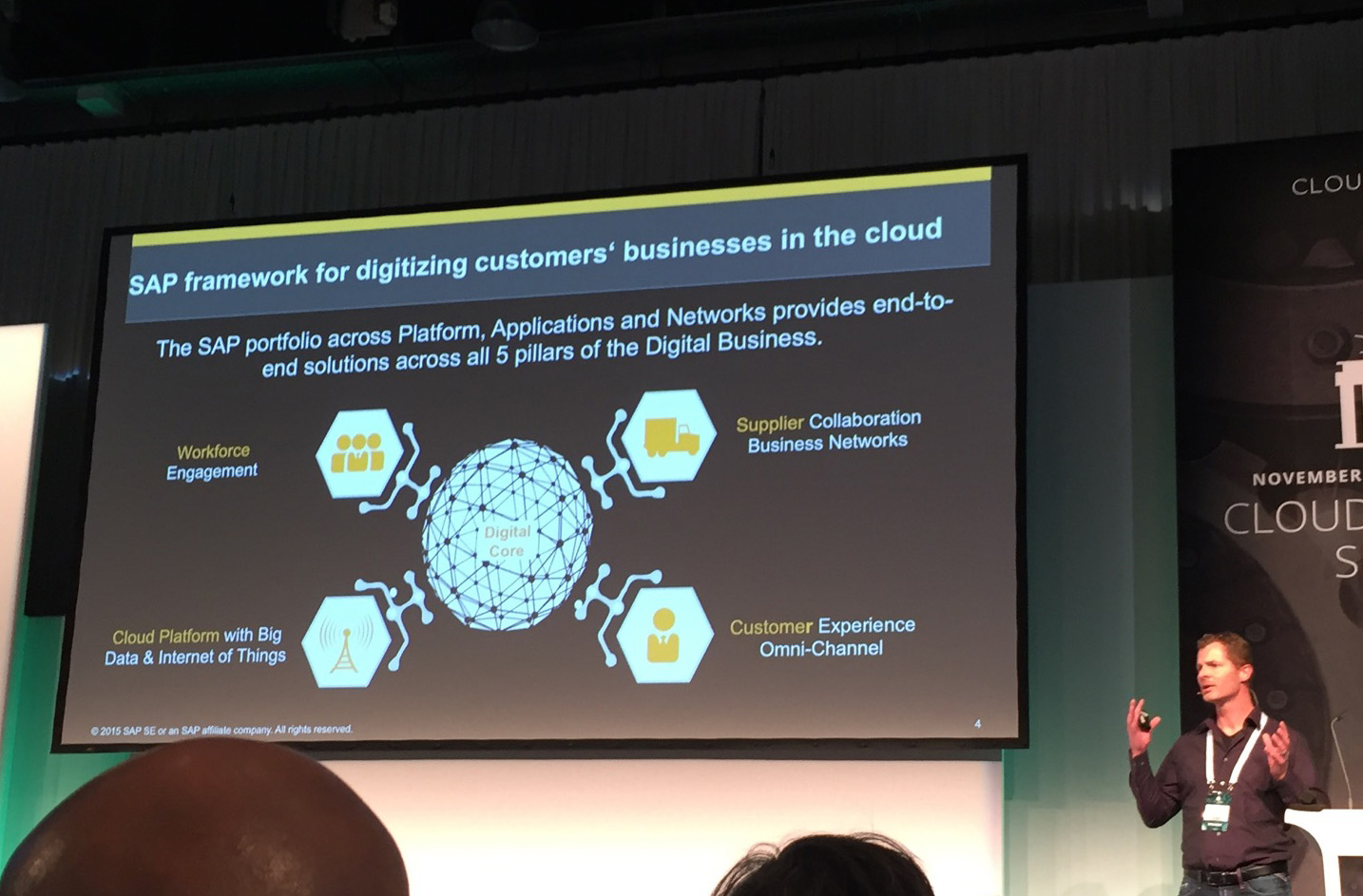 “We think an open cloud platform is a must.” —Dirk Basenach, SAP

He shared some details on how the SAP HANA cloud platform is implemented using CF. On the infrastructure level, SAP decided to move all services to OpenStack, so that they can select any hardware vendor (a competitive advantage). 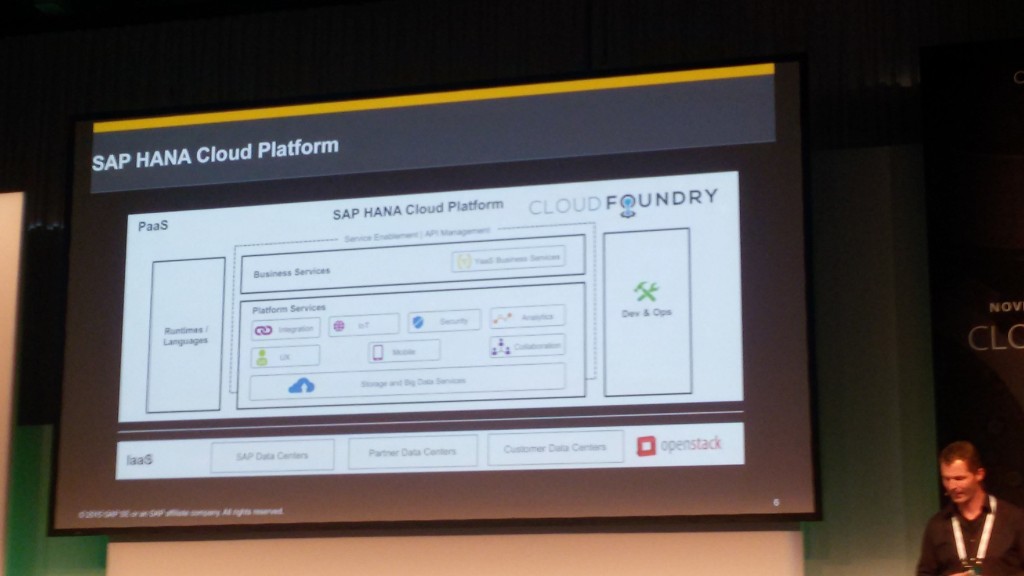 SAP has made a commitment to invest heavily in the BOSH OpenStack CPI, along with SUSE. 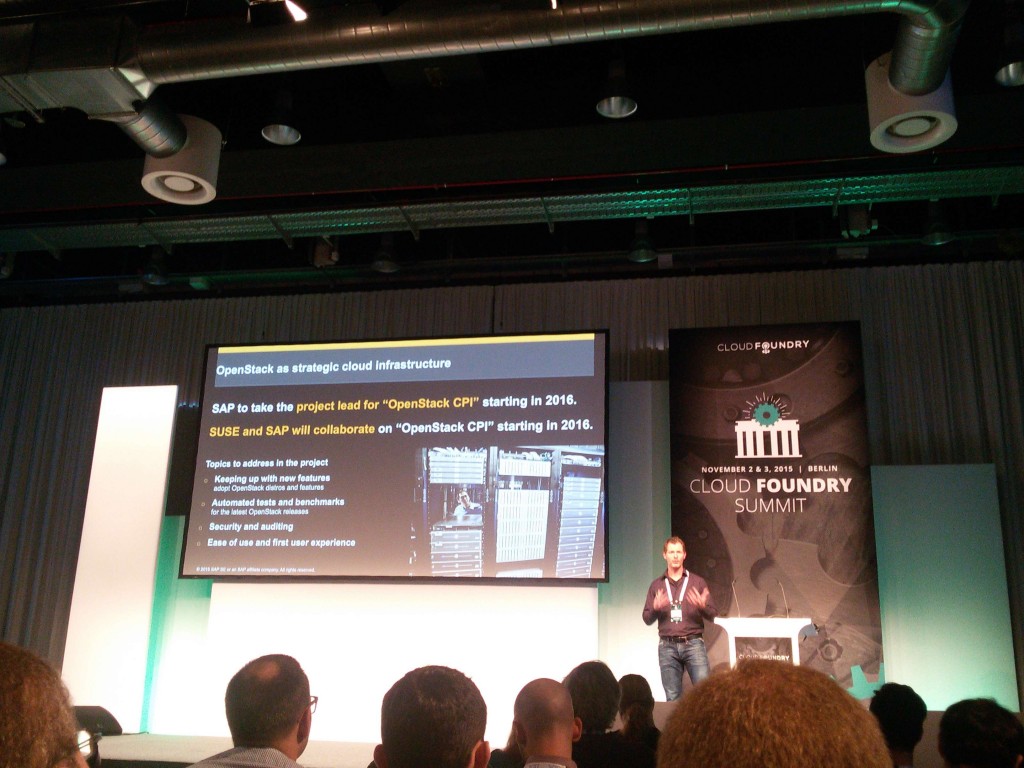 In the upcoming collaboration with SUSE on OpenStack CPI, SAP is planning to focus on: 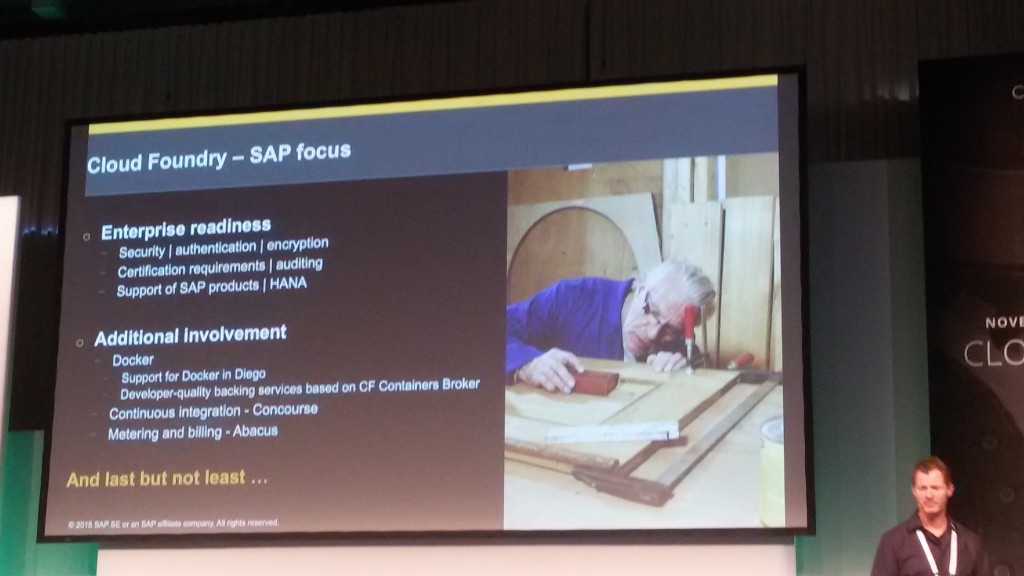 Open source is something our customers demand from us. The quality of the components are better. 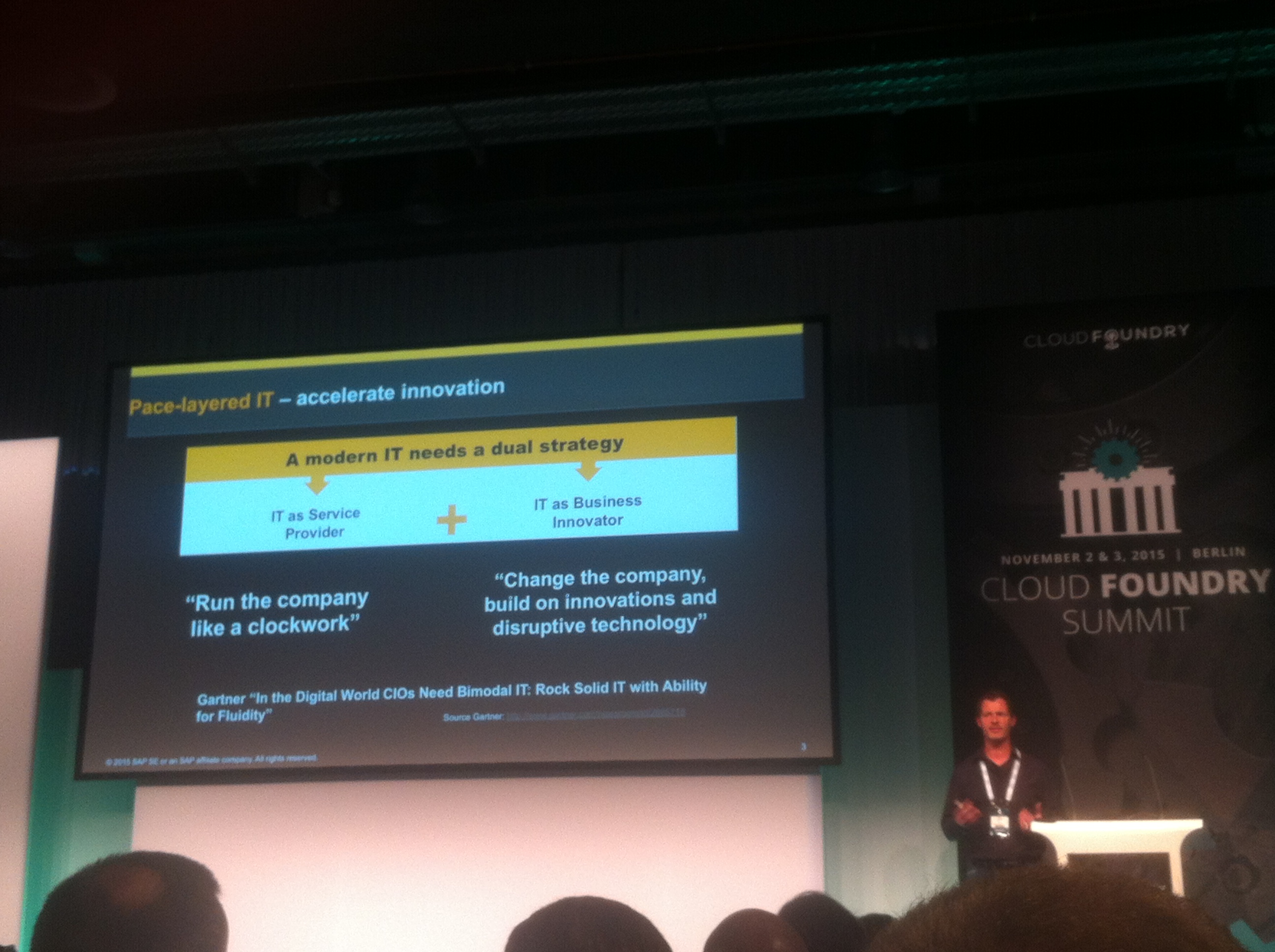 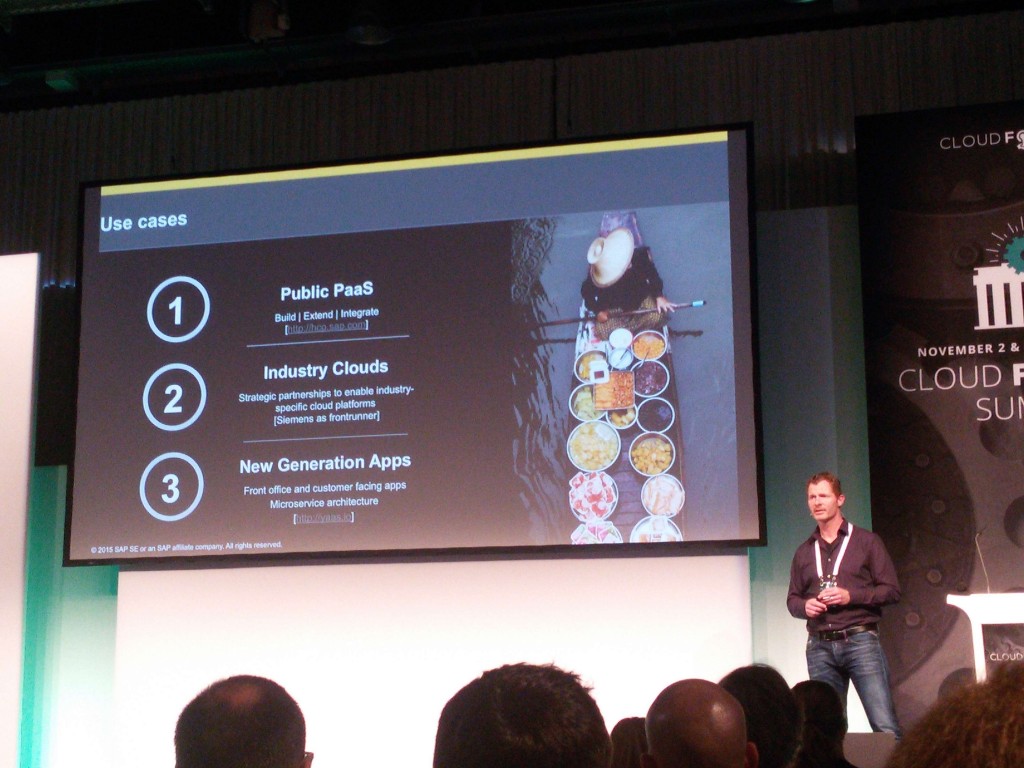 You can find the full slide deck by Dirk here. 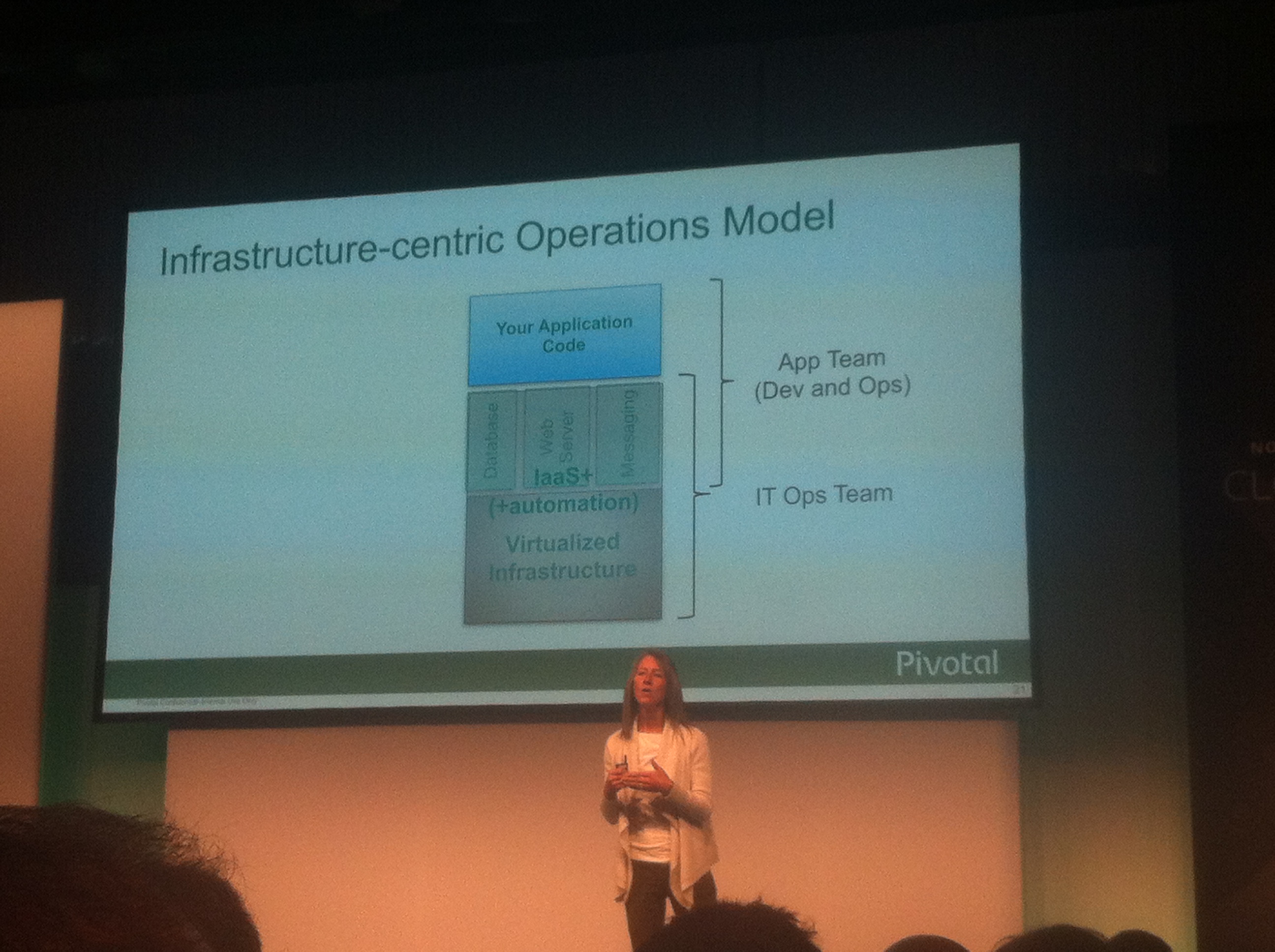 Cornelia used several real-life examples to demonstrate how CF boosts productivity and innovation by driving DevOps and providing the right level of abstraction. 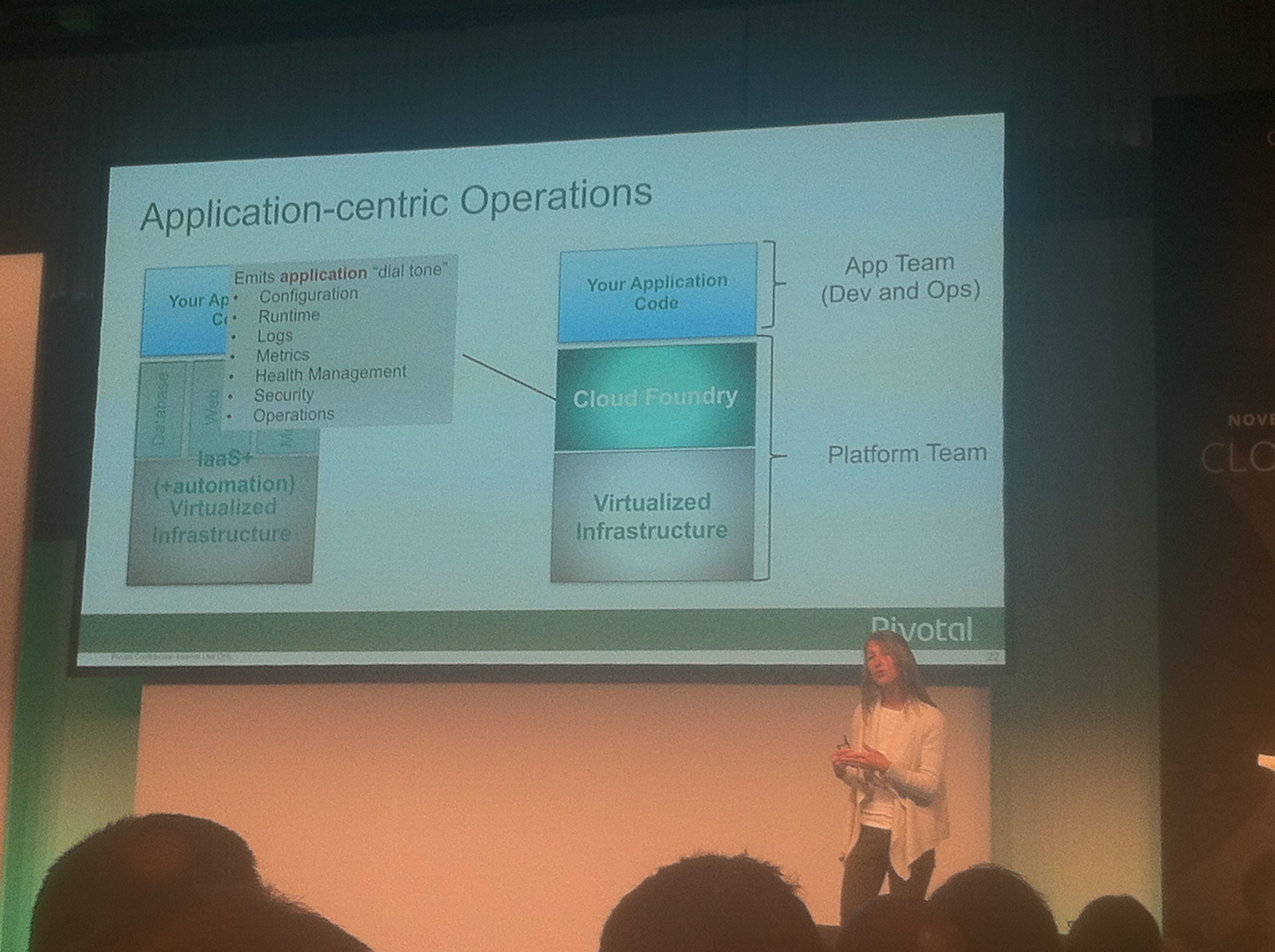 The port binding failure and applying CVE are two nice examples from Cornelia explaining problems coming out in lack of proper abstractions and separation of concerns. So, investing in configuration/platform helps to spend less on traditional operations in the long run (setup, scaling, etc.).

View all the slides from Cornelia for more:

Building a CF Dojo: A Model for Open Source Communities

Brian Gallagher described how EMC selected 11 engineers for their Cloud Foundry Dojo out of 2,300 applicants. 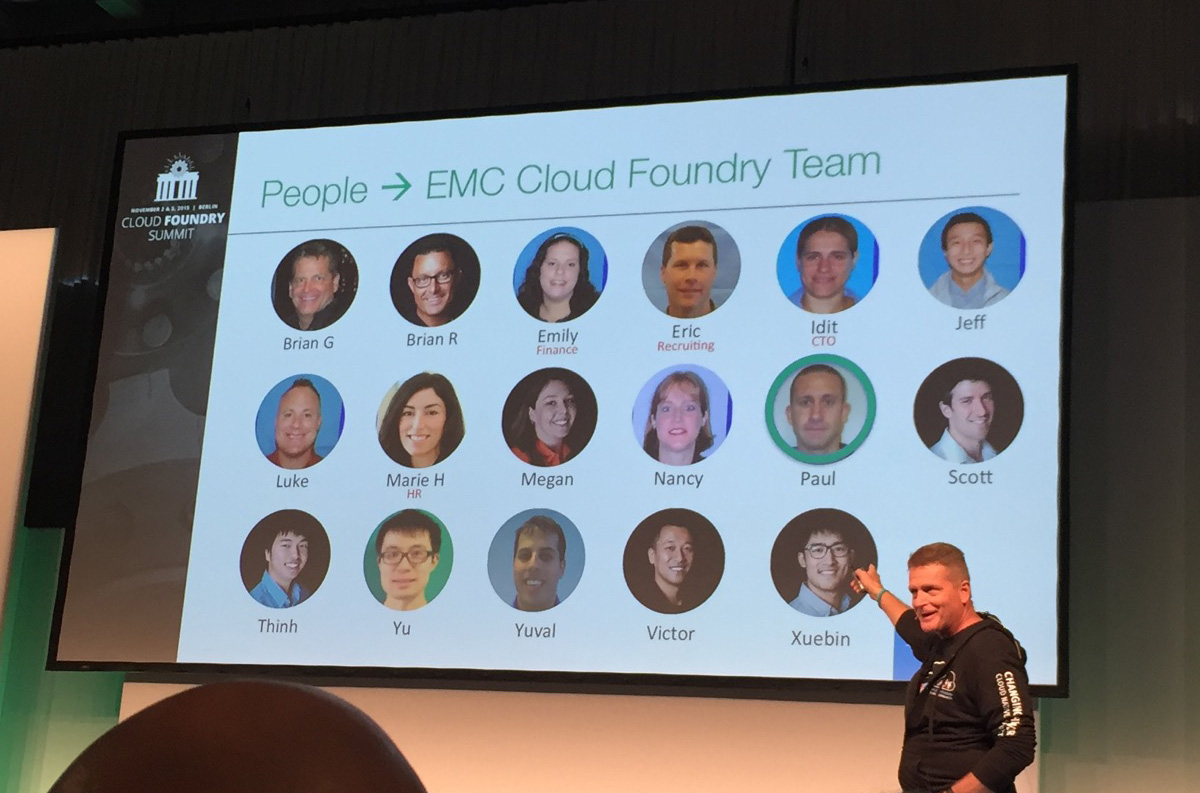 The process consisted of Skype interviews, testing programming skills, and a full day of pair programming at EMC’s office. The selected A-level candidates went through a six-week training program to become level A+ CF contributors. 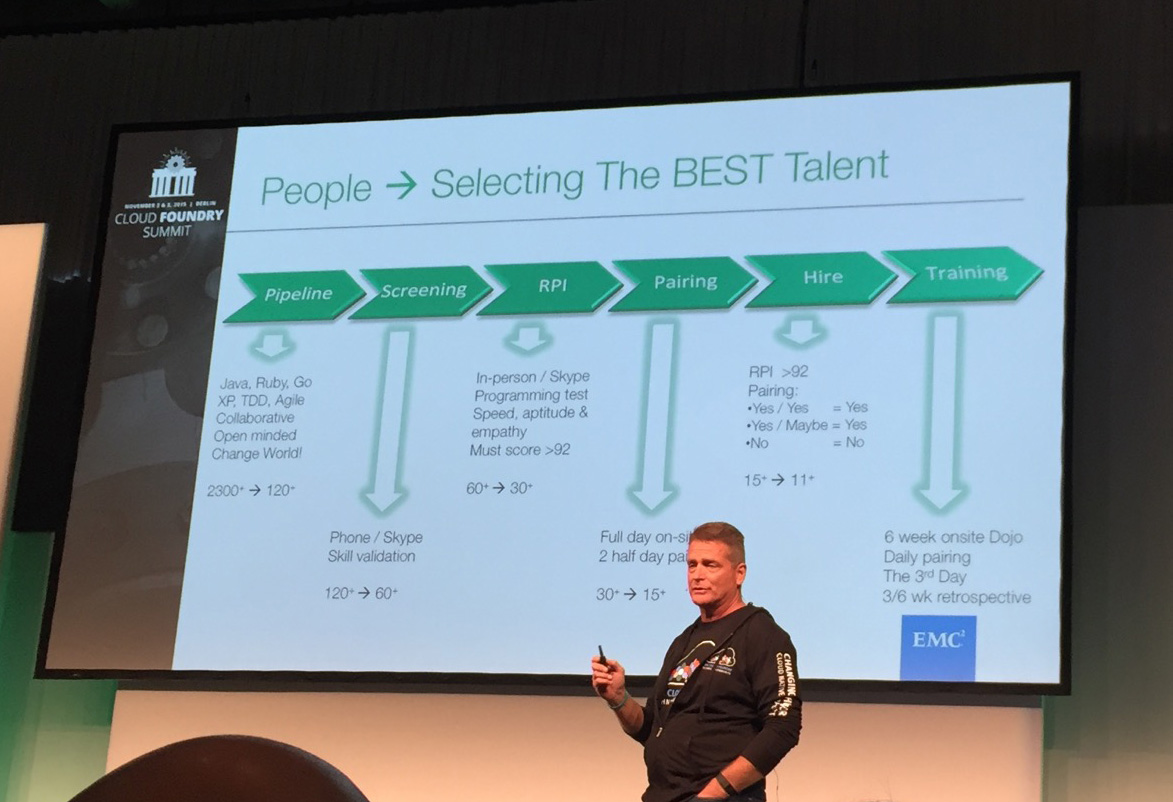 Brian Gallagher also mentioned some of EMC’s best practices for working on projects and motivating staff. 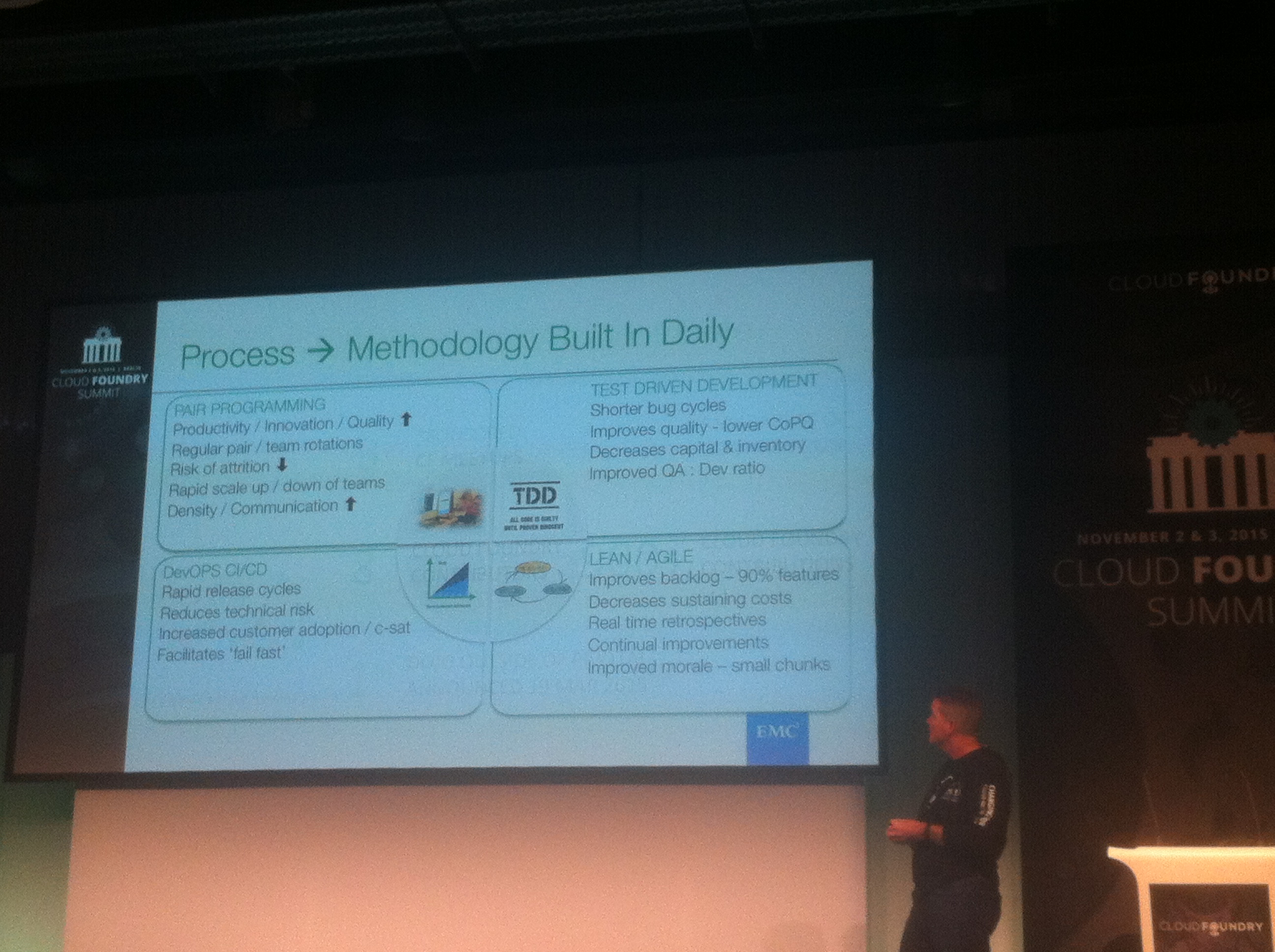 “What this community has done is put the best of the best together.” —Brian Gallagher, EMC

The keynotes were followed by six lightning talks.

Julian Fischer shared the experience of using CF at Anynines. According to Julian, local development is still a pain. He suggested to learn from Hashicorp’s Otto project—the successor to Vagrant.

Michael Behrendt of IBM suggested that university students should be given access to CF to help the community grow and also said a few words about the Bluemix team.

Robert Moss of CloudSoft continued with a keynote on managing corporate data warehouses using CF services. He described how the Apache Brooklyn service broker “bridges CF to existing data stores.” This broker is a way to go if you cannot find a necessary service in the CF ecosystem. (Read our overview of how the CF plugin for Apache Brooklyn simplifies the creation of services by using blueprints.)

Paula Kennedy’s talk on building teams at CloudCredo emphasized the importance of diversity when working with customers and collaborating inside one organization.

“To best serve the market, we need to employ the market.” —Paula Kennedy, CloudCredo

In the closing talk, “Cloud Foundry—as Sweet as Chocolate,” Marco Hochstrasser made some “culinary allusions” between CF and Swiss chocolate. By the way, anyone could have a chance to taste the both when visiting Swisscom’s booth during the summit. =)

Day 1 has demonstrated how Cloud Foundry is spreading outside the Silicon Valley to Europe and other destinations. Companies of different sizes and different verticals are eager to learn about the technology that disrupts the whole industries across several continents. Some of the European adopters, such as Orange and Swisscom, have already succeeded in becoming cloud-native enterprises. We strongly believe that more to come.