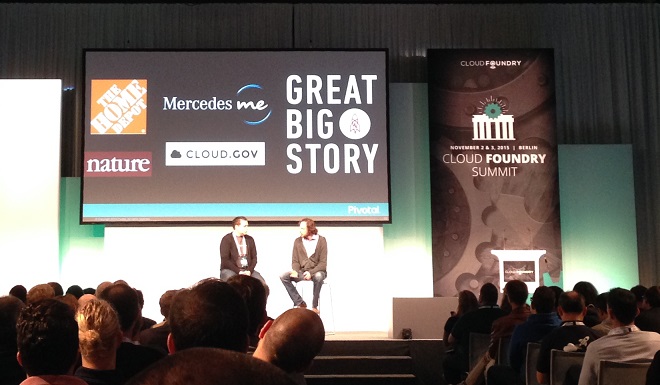 by Volha KurylionakNovember 4, 2015
The first in Europe CF Summit was a blast. Read about the new Cloud Foundry use cases, talks, quotes, and announcements from day two in this recap.

CF Summit Berlin focused heavily on user stories—at least nine of the talks presented during the second day described Cloud Foundry use cases. In fact, there was a separate track for such presentations, in addition to the technical tracks for developers and operators. Talks were delivered in parallel and it was simply impossible to see everything. This recap is an overview of the ones we got to attend, grouped into several categories.

So, let’s start with the news.

More announcements came on the closing day. Some of them were summed up on a slide shown at the end of the conference:

Keynotes and use cases: CF in the enterprise

The summit was traditionally opened by Sam Ramji, CEO of the CF Foundation, who welcomed the attendees and introduced the first speaker, Colin Humphrey’s of CloudCredo.

Colin’s keynote was full of advice on how to compete with startups is you are a large enterprise. He went through some of the typical cloud adoption anti-patterns found in many enterprises: 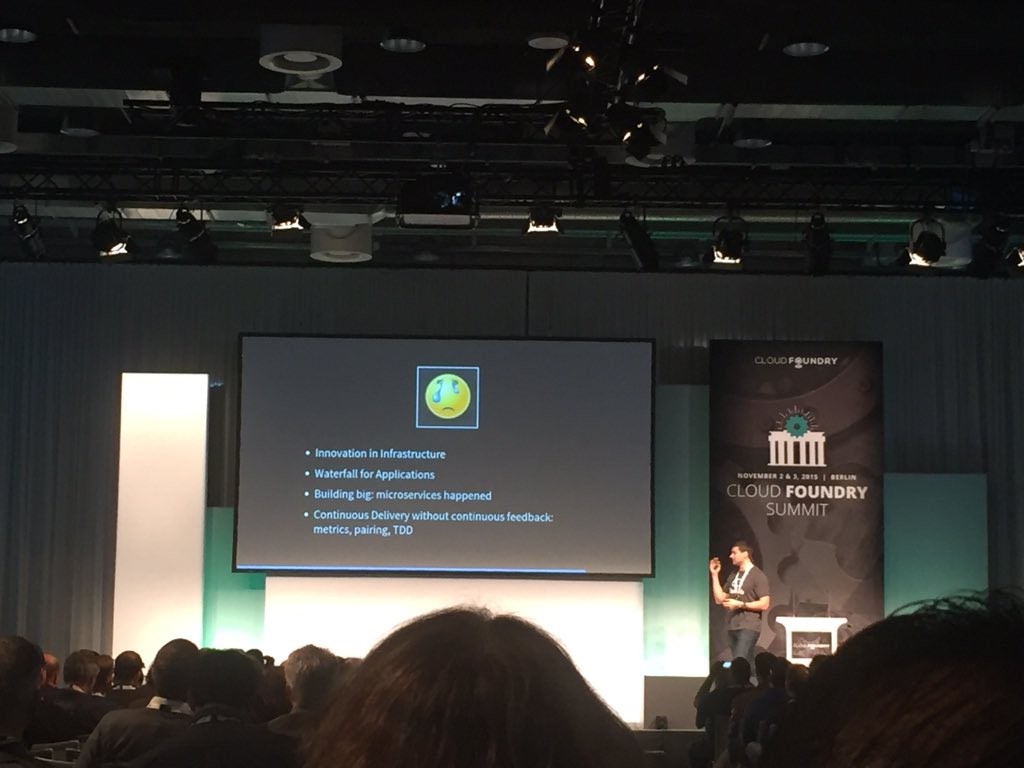 And then provided a list of best practices that do work, e.g., Colin strongly recommended against “wasting time on” building new PaaSes from scratch and “hiding away” applications for two years “while you fall down a Grantt chart.”

“While you are building your application on Cloud Foundry, your competition is wasting their time building their infrastructure.” —Colin Humphreys, CloudCredo

Below are some more of the best practices from this talk: 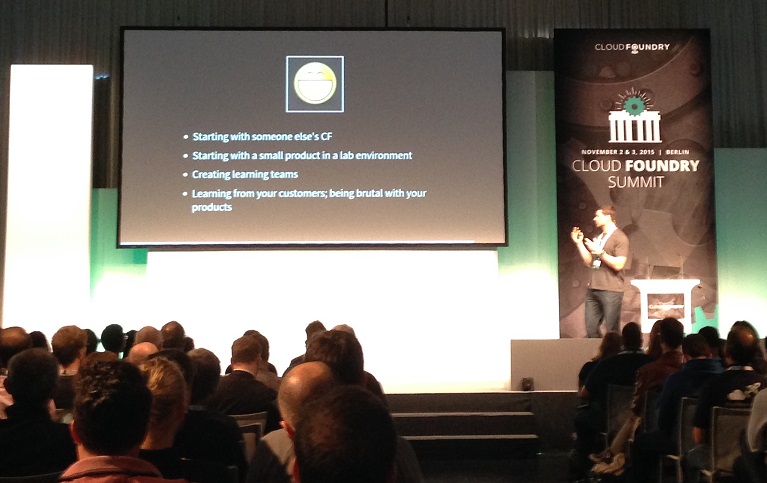 “Cloud Foundry is not exciting. What you can do with it is.” —Colin Humphreys, CloudCredo 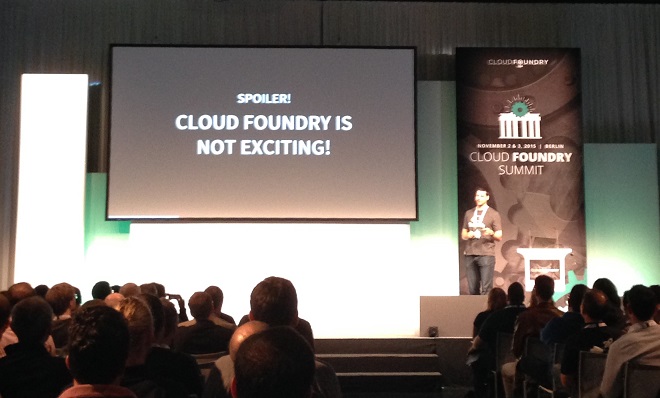 “Cloud Foundry will not differentiate you. You applications will.” —Colin Humphreys, CloudCredo

Welcome to the Cloud-native Enterprise

The presentation by James Watters and Joshua McKenty from Pivotal continued the discussion of cloud-native technologies in the enterprise with more advice and a success story of Mercedes Benz adopting CF for their intelligent cars.

They pointed out that legacy apps are something that makes money today, but does not allow for iterating as fast as desired (according to Casey West, Pivotal). So, the best way to get started with a PaaS without “bringing your baggage” is to begin “greenfield and work your way back” to porting legacy apps. 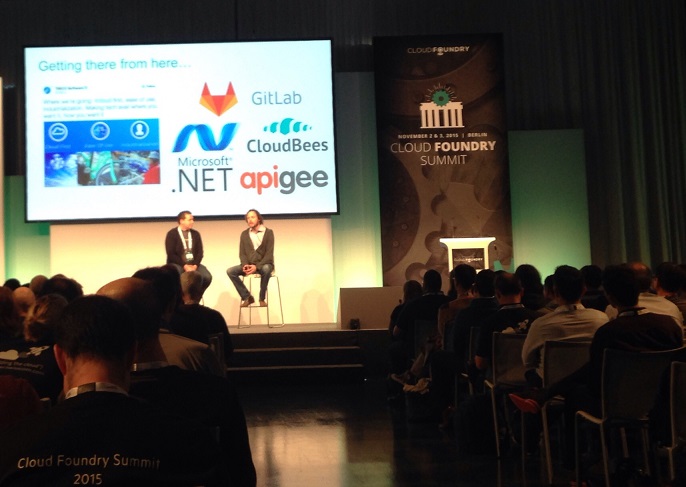 Another major theme of this talk was the importance of enabling metrics and feedback and moving from ticket-driven enterprise cultures to metric-driven ones. James also made a prediction that a common enterprise metric in the next five years will be the percentage of cloud-native software they use, not the degree of virtualization. 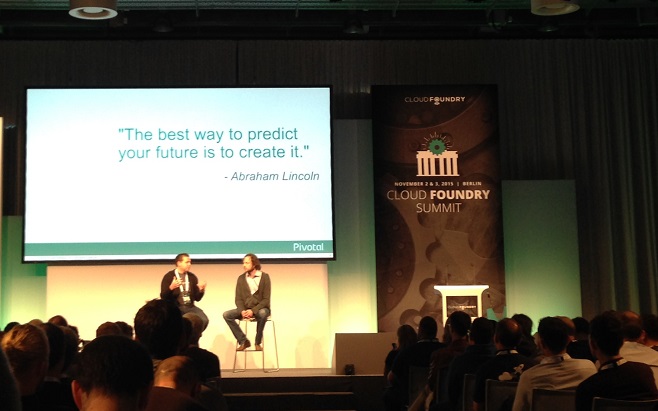 James and Joshua also said some words about the importance of getting feedback in the shortest possible time, so you can build the features that matter, and developing a profound software culture within your organization.

“Gonna have to reinvent your own culture, cause you have your own problems.” —James Watters and Joshua McKenty, Pivotal

The story by Armakuni was about how a team of 5–6 people used Bluemix to build a platform that helps the Comic Relief charity to collect donations, 90% of which come during a seven-hour window, once a year. 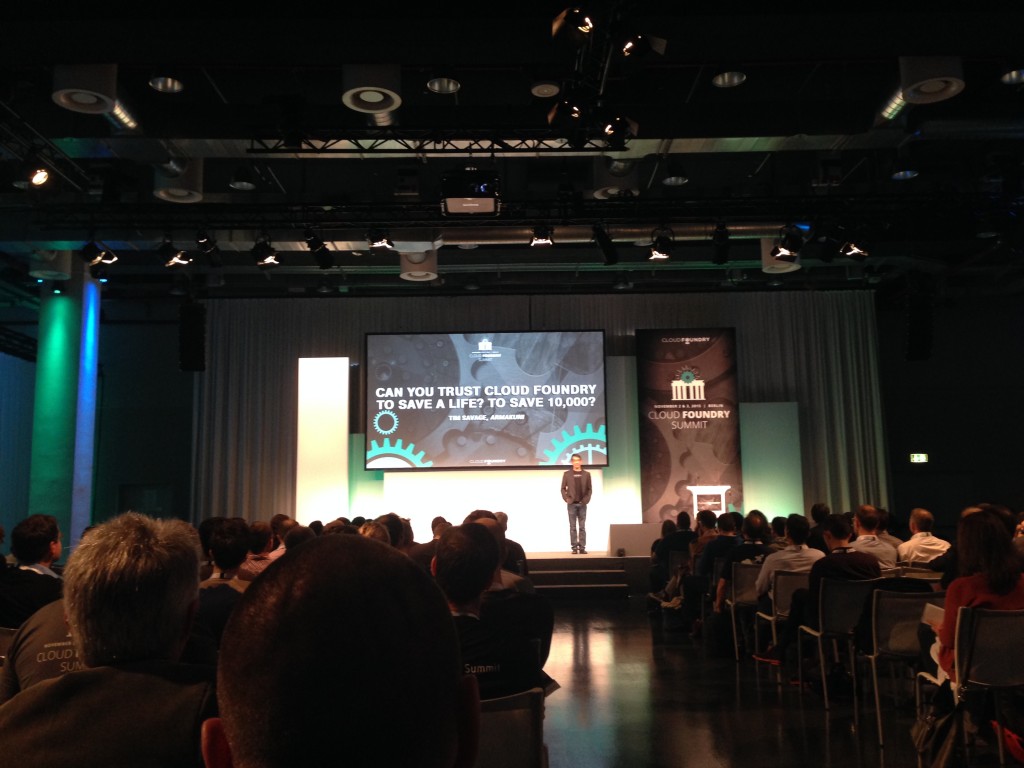 “A lot of things can go wrong and we can still handle 400 donations/second.” —Tim Savage, Armakuni

Armakuni’s platform uses CF and a Concourse CI pipeline to resiliently scale from 0 to 400 transactions per second, despite any failures. It can then scale down to allow for 70% savings during the rest of the year, when the traffic is flat. Using this solution, Comic Relief was able to raise £1,000,000,000 for their activities. The platform’s CI pipeline allows them to deploy code (blue/green deployments) at any time, even during peak production traffic. 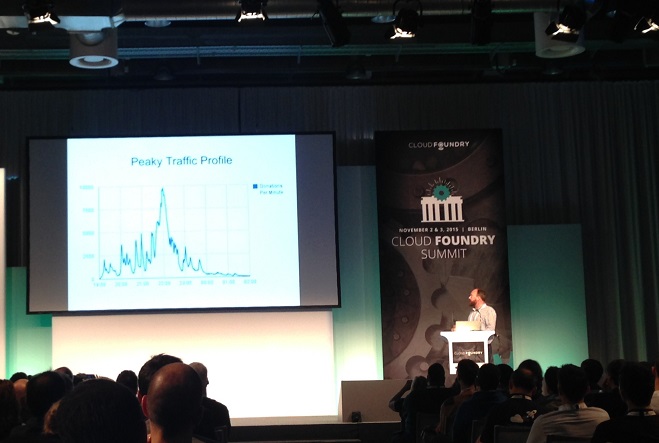 Did you know that, initially, SAP discarded Cloud Foundry as a PaaS option for their platform, but then changed their mind and achieved great results? This was one of several talks on SAP HANA delivered during the summit, focusing on why SAP chose CF and what they have done/are doing to make the platform more ready for enterprise use.

Matthias Steiner and Bernd Krannich presented the results of a SWOT analysis of SAP’s CF-based PaaS project done in the third quarter of 2013. Among the three things that they loved most about CF are its being the de-facto standard PaaS, support for multiple deployment models, and openness.

SAP had to make some difficult decisions and overcome a number of serious challenges when moving to the cloud. E.g., they decided to stick with CF, which was all about Linux until recently, although SAP is mainly a Windows shop. They had to introduce a number of changes into their internal procedures and software-defined networks. Finally, they had to ensure the right degree of security to satisfy the requirements of their enterprise customers, namely:

The talk also featured the list of SAP’s contributions to the CF ecosystem and some other interesting statistics, which you can find in this slide deck.

Sam Bryant and Prateek Mehrotra shared the experience of operating CF across several data centers at Fidelity. Their system consists of seven Cloud Foundry instances, which can be reliably upgraded over a weekend (two days), without shutting down the system. 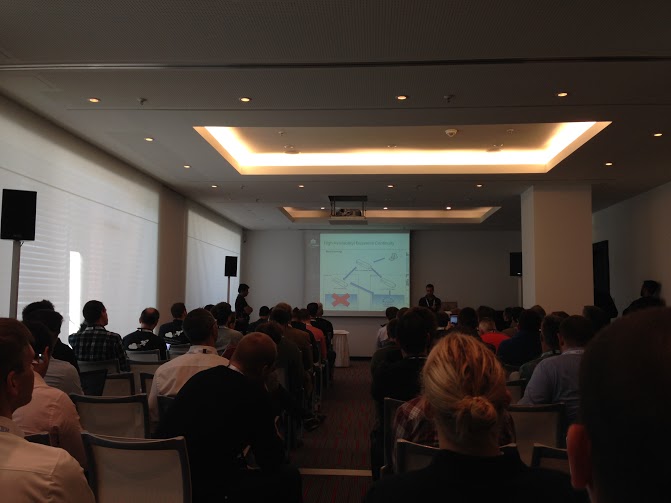 “Continuous Delivery of an app stack is like a mission to Mars.” —Sam Bryant and Prateek Mehrotra, Fidelity

Cloud Foundry for the Industrial Internet

The session by GE was, naturally, about their Cloud Foundry-based IoT platform—GE Predix. Steve Winkler demonstrated a detailed IoT reference architecture of Predix, which encompassed everything, from hardware to Cloud Foundry. He also mentioned that GE is building an industrial Cloud Foundry dojo program, similar to EMC’s dojo described on day one. 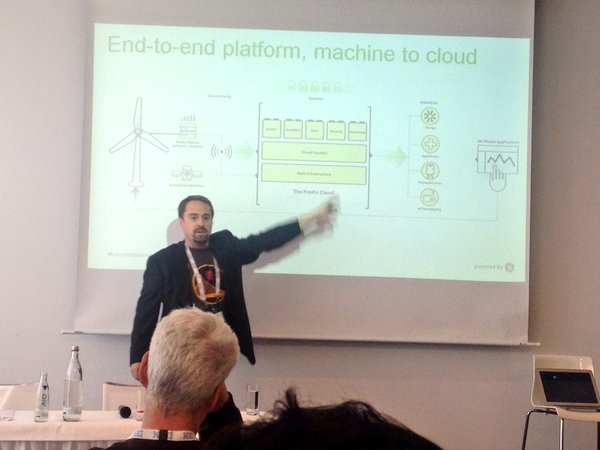 Building a Platform for Government Innovation

Diego Lapiduz’s, 18F, keynote told the story of how the US GSA adopted CF to change the government “stack from paper to software” and enable DevOps. 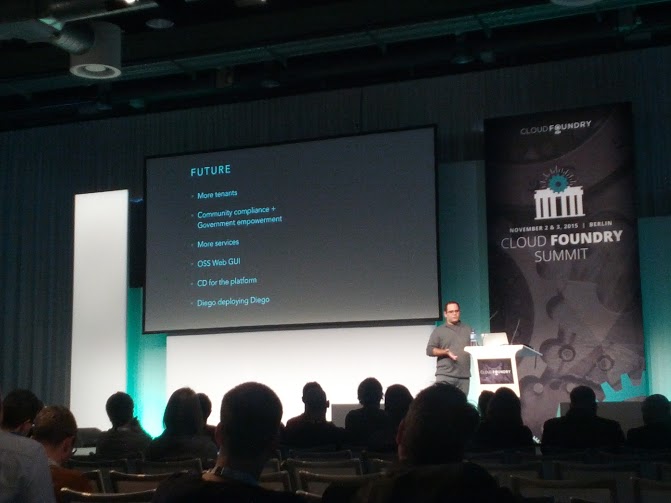 “PaaS is the way to do devops in government—or any big enterprise.”

The talk described all stages of adoption, from investigation, to a pilot project created in just 3–4 days, and actual implementation. The reasons why CF was chosen were as follows:

Additionally, CF was able to achieve compliance with governmental standards “faster than before.”

The talk also featured a slide with fun CF quotes from developers and a map of governments that are already running their apps on CF—so far, these are South Korea, the UK, the USA, and Australia.

“Cloud Foundry aimed to get Compliance done faster than before from government’s view.” —Diego Lapiduz, 18F

From Weeks to Minutes…For Real!

Simon Johansson and Daniel Otte described how Springer Nature was able to scale from 90 to 950 apps in one year using Cloud Foundry. At the moment, they are doing 750 deploys per day and development time has been cut from weeks to minutes. 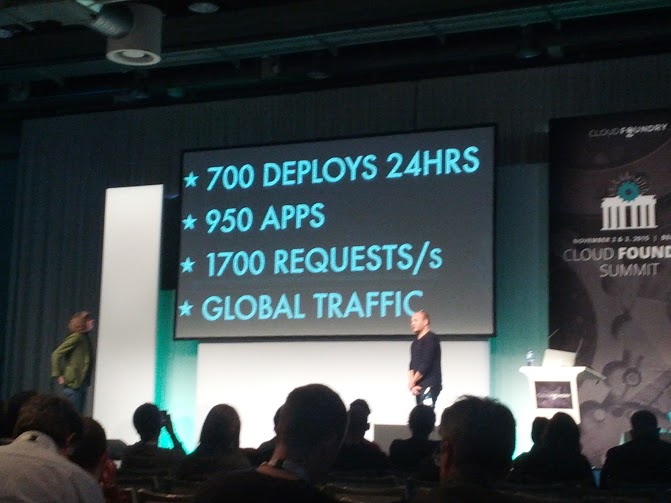 One of the main takeaways of this talk was how small CF’s footprint is compared to other similar solutions. Specifically, to run the same workload on one of the other “fast horses” that do not use containers, you may need up to 9 times more VMs, 10 times more RAM, and 20 times more VCPUS. 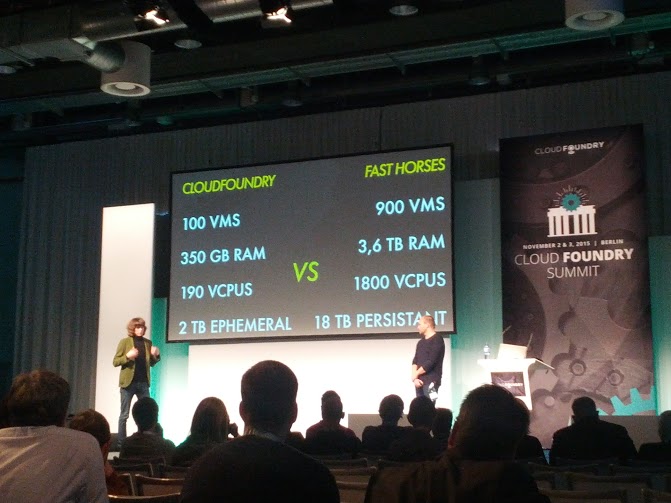 “We are learning how to convince your company to use Cloud Foundry.” —Daniel Otte, Springer Nature

Other talks that can be categorized as case studies included “Running Cloud Foundry at Swisscom” by Boban Glisovic and Diego Zamboni, Swisscom, “Continuous Delivery with Cloud Foundry” by Christoph Szymanski and Alexander Link, SAP, and the talk about the Cape2Cape car and how Cloud Foundry helped it break world records, delivered by Omri Gazitt and Klaus Baumecker, HP.

Unfortunately it is impossible to describe each and every one of them in detail, but we might be adding things to this recap later on as slide decks and videos will be published online.

Here, you can find the largest collection of CF use cases.

Two out of six developer sessions presented on the last day of the summit were about .NET support on CF, which became available some months ago.

Kundana Palagiri, Microsoft gave a live demo of how to deploy CF and a “Hello world!” .NET application on Azure. She used a CPI developed by Microsoft and published on GitHub—something you wouldn’t normally expect from a vendor like MS. Kundana explained that customers now require everything to be open source and licensed under Apache 2.0. The demo took about 20 minutes to complete. 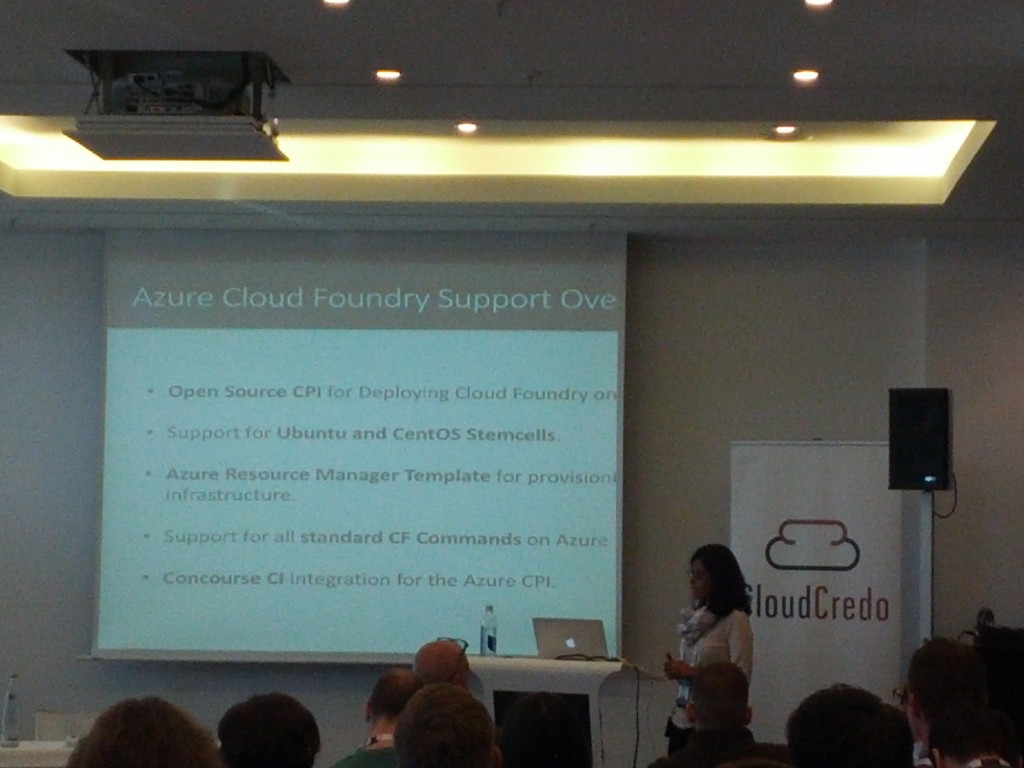 Another talk on Windows and Cloud Foundry was about containers and isolation. Mark Kropf, Pivotal and Gert Drapers, HP, announced the first release of Greenhouse support on Diego and also described the current features of Greenhouse. 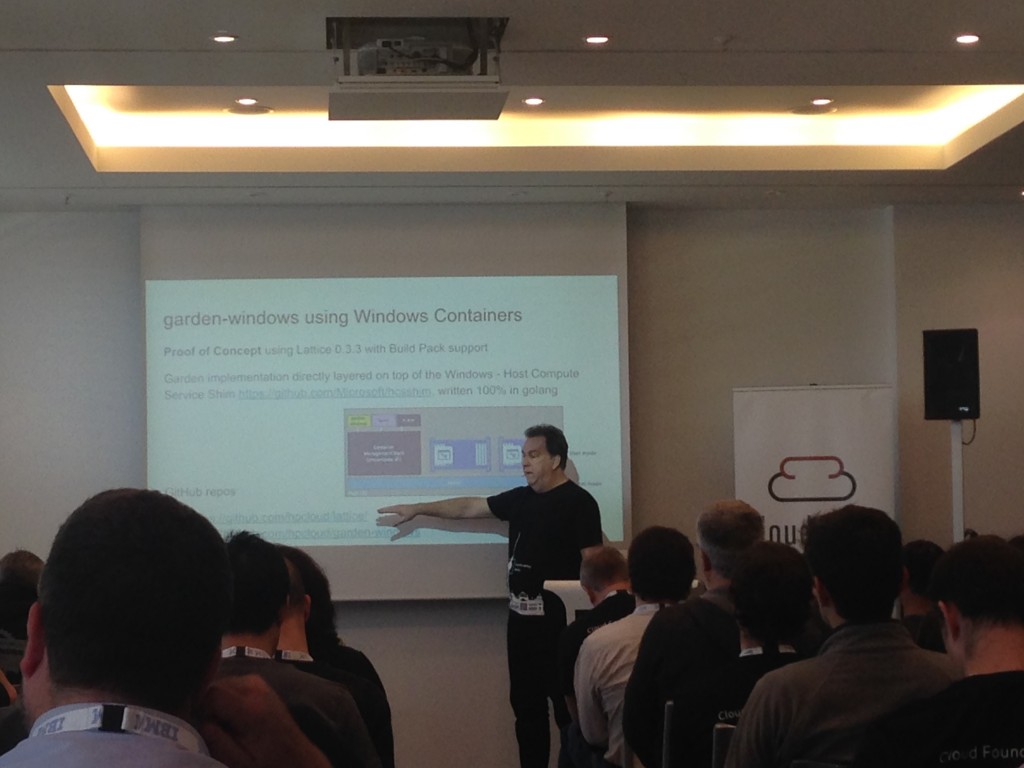 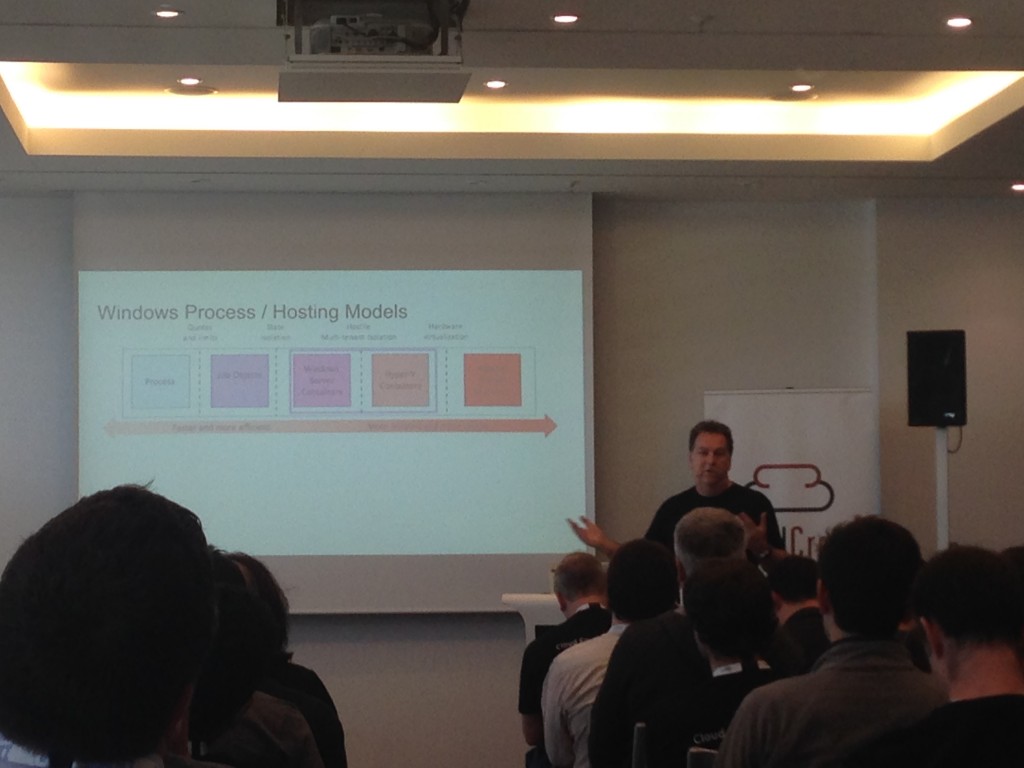 Other developer sessions covered such things as migrating apps to CF, building microservices and CF CLI plug-ins, as well as pair programming.

Naburou Taniguchi spoke about moving 100 apps to Nippon Telegraph & Telephone Corporation’s CF deployment in 100 days. The talk revolved around the issues that they faced and how they managed to achieve success. The main causes for apps not being able to work with CF included: 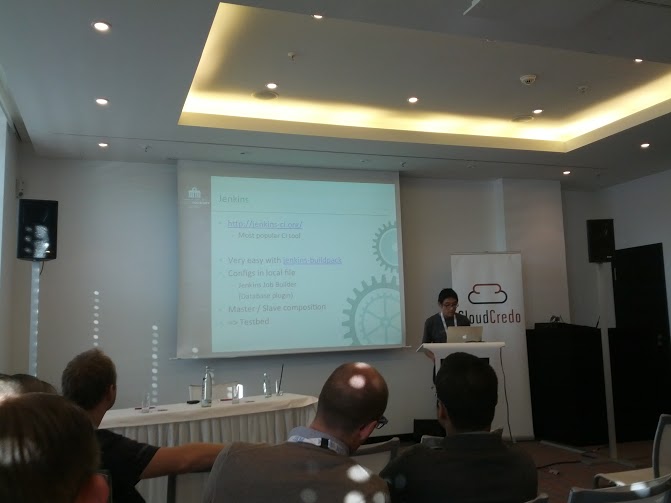 The main takeaways were that, to run apps on CF, you need to 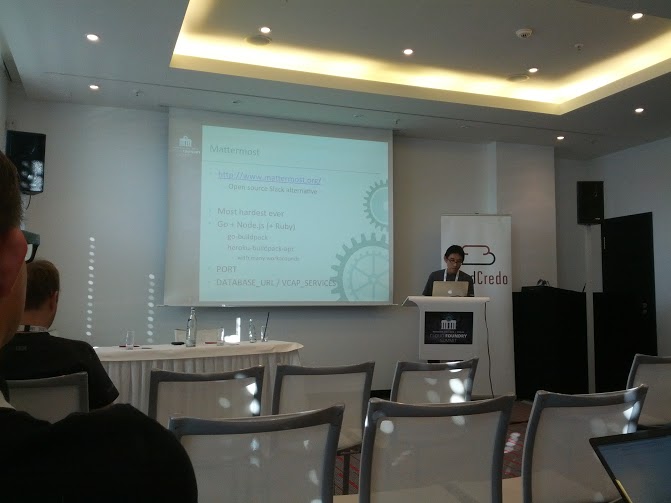 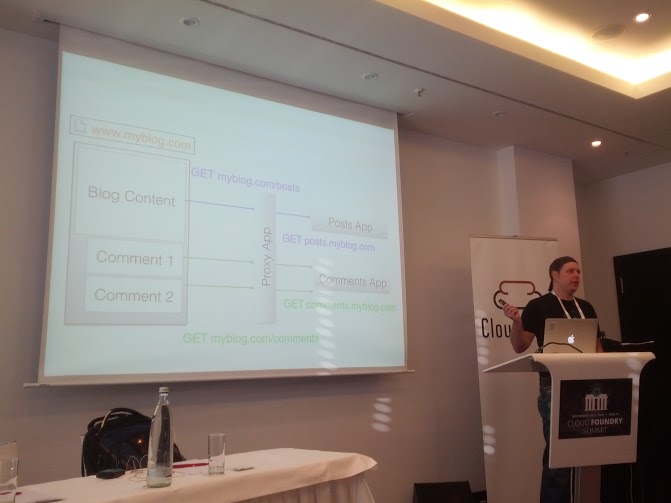 Urvashi Reddy and Kimberly Eberz, Pivotal, spoke about their experience of building an app in a week using CF and pair programming.

“From the product’s inception to final cf push, we wanted to pair for it all.”

BOSH was a recurring theme in the DevOps sessions—three talks were dedicated to BOSH and/or BOSH CPIs:

Here’s the full slide deck from the talk by the Orange team.

“Cloud Foundry is the killer app for BOSH; now that you’ve learnt it, why not use it for everything else?” —Dr Nic, Stark & Wayne

The other three talks dealt with logging, security, and continuous integration. E.g., Johannes Engelke from SAP described the process of automating deployments with concourse.ci, a CI tool that has been drawing a lot of attention recently. Check out his slides here.

Pivotal Engineer Kira Combs showed demos of the Cloud Foundry Loggregator and APM tooling, accompanied by a technical overview. She also explained how log metrics can help to spot and catch bitcoin miners in a PaaS.

Aliaksandr Prysmakou from Altoros shared some advice on how to prevent security issues in Cloud Foundry and achieve compliance with industry standards, e.g., HIPAA and PCI DSS. 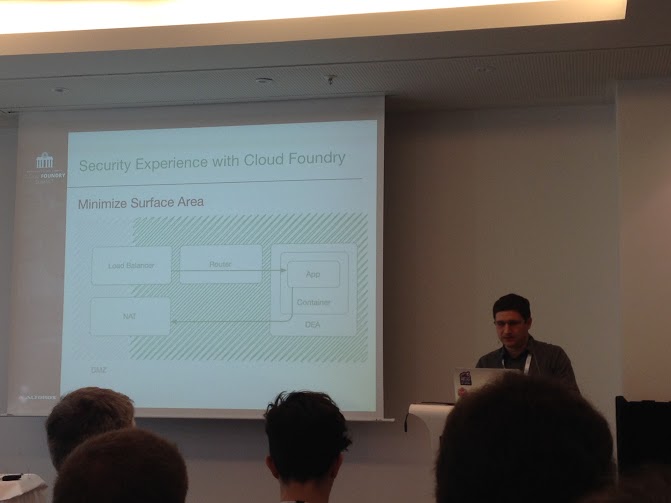 “There are no [regulatory] security requirements that cannot be met by Cloud Foundry.” —Aliaksandr Prysmakou, Altoros

Sam Ramji wrapped up the last day with some statistics on the rapidly expanding European Cloud Foundry community.

Get ready for CF Summit Shanghai

The first CF Summit in Europe was simply epic and also truly diverse. The “over-subscribed” second Cloud Foundry Diversity Luncheon and Program with great talks by Jane Silber, Paula Kennedy, Caroline McCrory, and Susanne Huesing, and the summit sessions delivered by tech pros of different nationalities and genders have proved it.

The next CF Summit will be in Shanghai, China, at the start of December. If you have never attended a CF Summit before, don’t miss your chance. The registration is now open at the CF Summit Web site. See you there in four weeks!