The meeting also discussed recent changes to the leadership of the CF Foundation, as well as updates around the ecosystem projects. The call was moderated by Troy Topnik of SUSE.

Dedicated to maintaining a vendor-neutral governance process, Paketo Buildpacks is a new project from the Cloud Foundry Buildpacks team. The goal is to form a collection of open-source cloud-native buildpacks for the most prominent languages and frameworks to serve as a viable Dockerfile alternative. Paketo Buildpacks will generate container images—compatible with Open Container Initiative (OCI)—that run on Kubernetes.

According to Kashyap Vedurmudi of VMware, Paketo Buildpacks are tentatively scheduled to launch on April 21, 2020. Upon launch, the project will support Java, .NET Core, Node.js, Go, NGINX, and PHP.

The project will use the Apache 2.0 license. While a roadmap is not available yet, support for Ruby and Python is currently planned. Additional information about Paketo Buildpacks is available in its FAQ. Anyone interested in following the project’s development can join the Paketo Buildpacks Slack channel.

Maintained by the Foundation, Cloud Foundry Tutorials is a set of easy-to-use guides around the platform and other related cloud-native technologies. Currently, you can follow the tutorials’ guidelines either through your own instance of Cloud Foundry or on Katacoda.

Steeve Greenberg of Resilient Scale provided an overview of the project and a live demonstration. He also suggested that other Cloud Foundry projects could showcase new features through similar tutorials.

“Our goal here is to collect and curate sets of tutorials that are easily consumable for various relevant audiences. As a community, we can do better at introducing people to core concepts and doing some of those things quickly.” —Steeve Greenberg, Resilient Scale 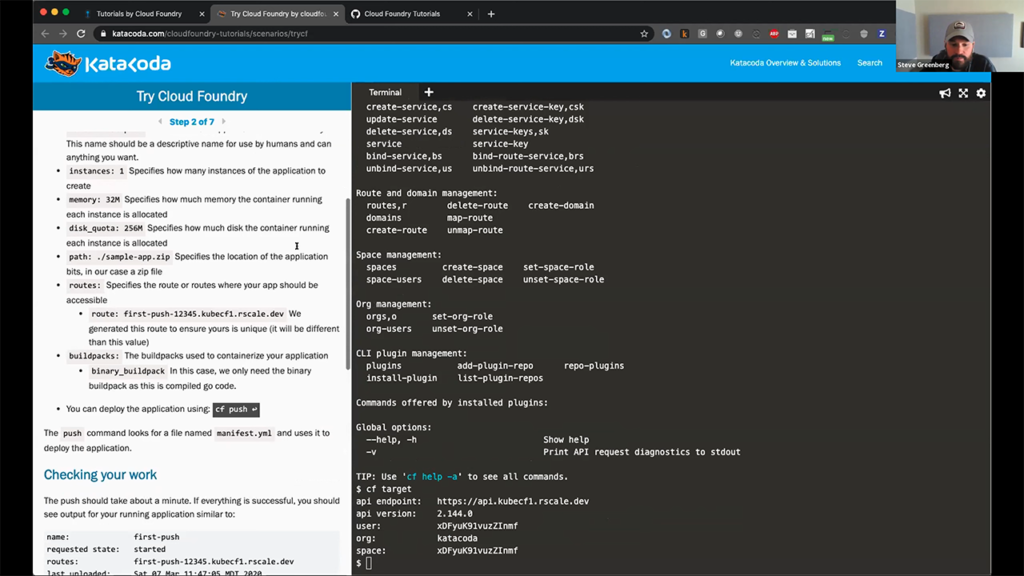 Richard Cox of SUSE noted the release of Stratos v3.0, which includes the following developments:

Swarna Podila provided details to recent changes to the Cloud Foundry Foundation’s leadership. Most notably, Chip Childers is now the Executive Director, and Paul Fazonne of VMware is now the Chairman. We would like to thank Abby Kearns, who made an enormous contribution to the welfare of the Foundation and the community, and wish her all the good luck in her future encounters.

According to Chip, the Foundation will be focusing on two key goals moving forward: growing the community further and bringing good developer experience to Kubernetes.

With the COVID-19 pandemic, Chip explained that the North American Summit is almost certainly going to be held virtually. Details about the European Summit will have to wait as international travel bans are making it difficult to plan ahead. Meanwhile, you may be interested in the bi-weekly technical round-up.

The next CAB call is preliminary scheduled for May 20, 2020, at 8 a.m. PDT. Anyone interested can join Cloud Foundry’s CAB Slack channel.

You can check out the video recording of the CAB call.

Below, you can also find the video recording of the Kubernetes SIC community call held on March, 31.

Cloud Foundry Advisory Board Meeting, May 2020: CI and Logs at Scale