by Carlo GutierrezJune 21, 2018
This month's call discussed Stratos (a UI for Cloud Foundry) and Project BlockHead aiming at bringing together blockchain, CF, and Kubernetes.

The Cloud Foundry Community Advisory Board (CAB) meeting of June 2018 featured a demo of Stratos v2. Another demo on the agenda was Project BlockHead, which is supposed to simplify the development of smart contract apps to further deploy them either to Cloud Foundry or Kubernetes.

As usual, the call was led by Michael Maximilien (aka Dr. Max) of IBM. There were also brief reports from the project management committees and an update on the upcoming summit in Europe.

Originally developed by SUSE, Stratos is a user interface (UI) for Cloud Foundry that was first introduces at the CAB meeting of November 2017. Since then, the project was approved as a CF-Extension in December 2017.

“Since January, we’ve been operating with the CF-Extensions PMC. The repo has been moved to CF incubator in GitHub,” said Neil MacDougall of SUSE. “Our focus for the last six months has been on version two.”

The improved UI enbales developers to deploy apps and also increase the number of instances. Apps can also be deleted along with the attached routes. 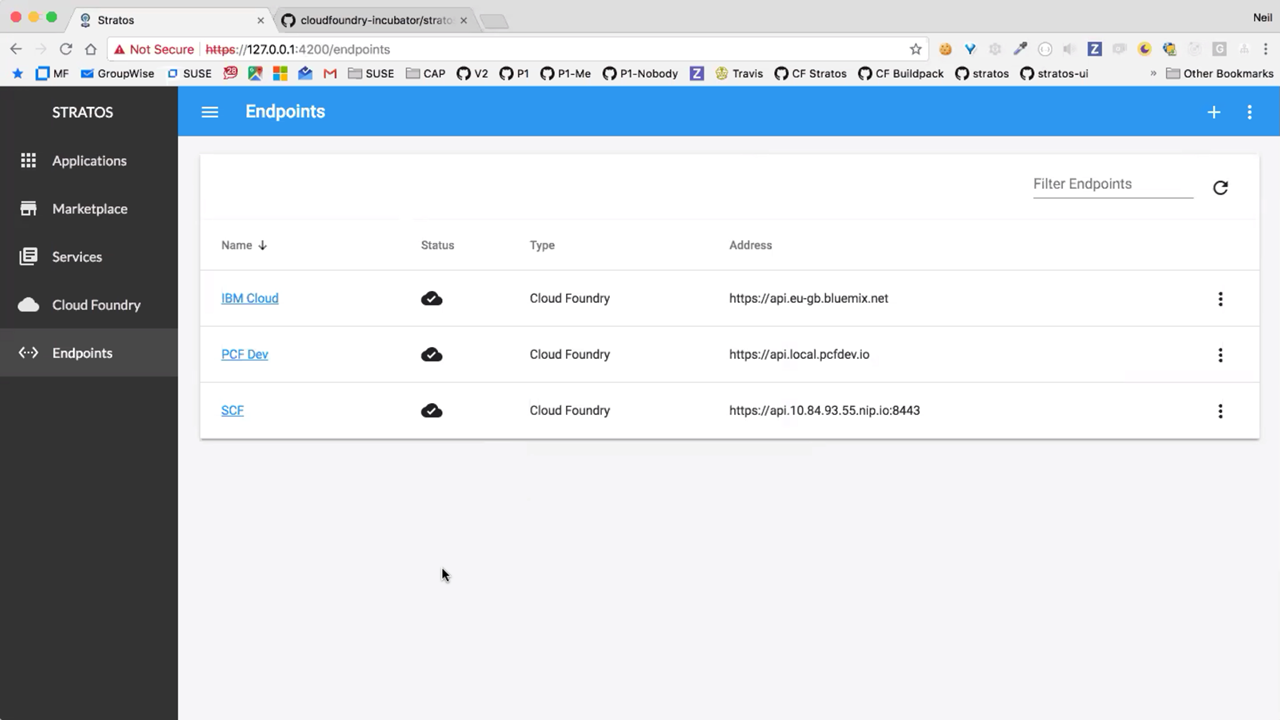 Stratos v2 sports a sleeker look to hide all the previous clutter and to highlight more important information. “We do use the CF CLI code as part of this,” explained Neil. “We’re just invoking it through our back end.”

Nima Kaviani of IBM led the demo for Project BlockHead—the winner of a hackathon at Cloud Foundry Summit 2018 in Boston. The initial idea was to “quickly enable people who use Cloud Foundry and Kubernetes to also benefit from blockchain.” Now, it is being submitted to CF-Extensions.

According to Nima, Project BlockHead aims to:

“Right now, BlockHead uses Ethereum, but that doesn’t mean that it has to,” Nima said. “It can support any blockchain network” (e.g., Hyperledger).

According to Nima, BlockHead makes use of the Open Service Broker API specification to build a service broker layer between a web app and the blockchain network. “The broker can be deployed on Kubernetes but not as standalone due to complications with Docker sockets,” he pointed out. “We are working to make that work. Currently, it can be deployed side-by-side and integrated as a service into Kubernetes and used with Kubernetes apps.” 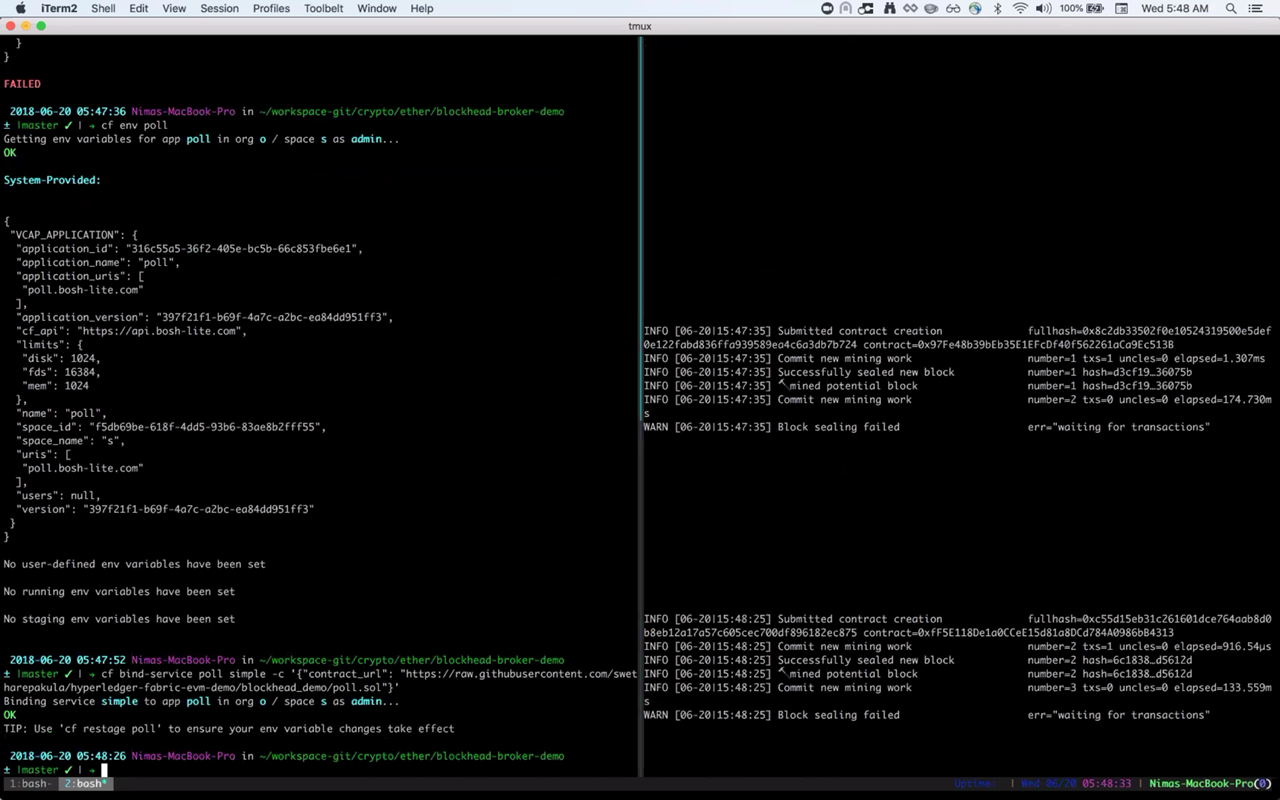 Binding a sample polling service to an app (Image credit)

For now, BlockHead is available as a BOSH release and a container broker.

For more details on Project Blockhead, check out Nima’s blog post, slides, or the demo from the hackathon. In this GitHub repo, you will also find a sample Web3.js client app that invokes methods on a Solidity smart contract based on the credentials provided from the BlockHead Broker.

Dmitriy Kalinin of Pivotal highlighted that the BOSH team works on “removing registry and updating CPI-related machinery to work with CPI v2.”

There were also fixes to the BOSH v266 release related to link refactoring issues.

Xenial stemcell v81 was released. “We are pushing more teams to test against the Xenial stemcell,” said Dmitriy. “Hopefully Cloud Foundry deployment repo will start adopting that as the default stemcell.”

Some of the core CF Runtime teams have been engaged in testing against Xenial stemcell, according to Eric Malm of Pivotal. “The Diego team just switched its Concourse CI to that, as well as our other test environments,” added Eric. “We haven’t seen much that’s surprising, so that’s good news.” He also highlighted the CAPI team’s progress in “allowing rolling updates on the Cloud Foundry v3 API.”

“The routing and container networking teams are proceeding with various aspects of the Istio and Envoy integration,” he said. “The routing team is continuing to make incremental progress supporting coordination with Istio and Envoy components for the new routing control plane.

The container networking team is also working on “various options to route internal traffic through Envoy to take advantage of its client-side load balancing capabilities.” The Diego and Garden teams have also been working on supporting rootless containers.

Swarna Podila of the Cloud Foundry Foundation highlighted that there were already 100+ registrations and 300+ submissions for speaking proposals for the Cloud Foundry Summit 2018 in Switzerland. Early bird registrations are open until July 20. With the conference taking place in October, they are still expecting a significant spike in registrations four weeks before the event. Call for papers notifications and other announcements will go out in the second week of July.

Swarna also mentioned that the Cloud Foundry Foundation values had been updated, and the Linux Foundation had recently published the Open Source Jobs report.

The next CAB call is scheduled for 8 a.m. Pacific Time on Wednesday, July 18. As always, the call will be open to anyone interested in listening or participating. Connection details and the monthly agenda appear on the Cloud Foundry Slack channel.

Using Logsearch for Hybrid Cloud Foundry and Kubernetes Deployments
Next