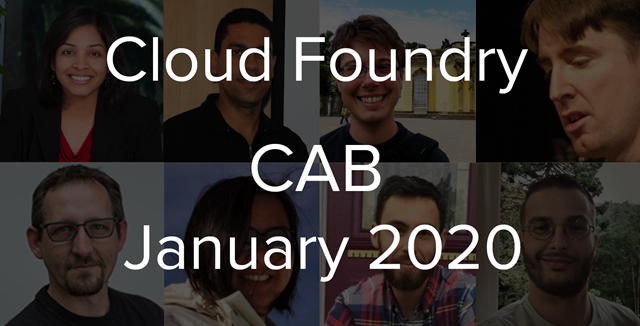 by Carlo GutierrezJanuary 16, 2020
KubeCF may become a central point for integrating releases of Cloud Foundry components for Kubernetes.

The first Cloud Foundry Community Advisory Board (CAB) meeting of the new year focused on the KubeCF project. Michael Maximilien (a.k.a. Dr. Max) of IBM moderated the call and speculated the idea of letting some fresh blood in after being a major organizer of the meetings for over three years.

“I’ve been running the CAB meetings for three years. This is the fourth year and I’m not tired of it. I’m happy to meet with everybody, but at some point, it makes sense to give other people an opportunity to share new ideas.”
—Dr. Max, IBM

Dr. Max also shared the results of the CAB survey 2019. It appeared that the community truly enjoys demos of new projects, reports on their evolution and the status of the ongoing initiatives, as well an open exchange of ideas. The call featured regular updates from various members of the development teams and from the Cloud Foundry Foundation.

KubeCF resembles cf-deployment for Kubernetes distributions for Cloud Foundry. KubeCF is published as a Helm chart and container images.

According to Troy Topnik of SUSE, KubeCF relies on the Cloud Foundry Operator to run, which watches a namespace and uses a CRD to translate BOSH manifests into Kubernetes ones.

“KubeCF’s function as a central point to bring together components for a Kubernetes distribution is like that of cf-deployment.” —Troy Topnik, SUSE

During the call, Thulio Assis of SUSE provided a demonstration of KubeCF. He also explained how KubeCF adds Kubernetes-specific functionality to cf-deployment.

“KubeCF operation files are used to add functionality to cf-deployment that is specific to Kubernetes, such as probes, health checks, or open and closed ports.” —Thulio Assis, SUSE

Currently, KubeCF can consume BOSH releases from cf-deployment and Helm charts. The SUSE team is considering adding support for Kubernetes YAML and YTT templates. KubeCF v0.1.0 was released on December 26, 2019, and is waiting for a community feedback. This version includes Eirini v1.0, App-AutoScaler v3, and cf-deployment v12.18. Now, KubeCF v0.1.0 passes Cloud Foundry acceptance tests (CATs) with Diego. KubeCF v0.2.0 is expected soon, and a stabilized v1.0.0 is scheduled for March 2020. For additional details, you can check out this presentation.

Morgan Fine of Pivotal reported that the BOSH team is working on exposing such BOSH Director metrics as:

Following one of the options from the previous CAB meeting in December, Swarna Podila noted that the Cloud Foundry Summit will be collocated with Open Source Summit, the Linux Foundation’s anchor event. The North American summit will be held in Austin, Texas, on June 25, 2020, and the European summit will take place in Dublin, Ireland, on October 29, 2020. Additional details will be announced soon.

Chip Childers added that the Foundation will host cloud tracks at the Open Source Summit. These will be focused on contributors and end users.

Swarna also reached out to anyone looking to be mentors for students who are interested in becoming a Cloud Foundry contributor. Any volunteers can contact Swarna directly.

The next CAB call is scheduled for Wednesday, February 19, 2020. The call will start at 8 a.m. Pacific Time. Anyone interested can join Cloud Foundry’s CAB Slack channel.

Blockchain to Add More Transparency to Over-the-Counter Trading
Next