by Roger StrukhoffAugust 16, 2018
The mutual integration of Cloud Foundry and Kubernetes continues to drive top-of-mind issues within the community.

Istio and Project Eirini formed the highlights of this month’s Cloud Foundry Community Advisory Board (CAB) call, held on Wednesday, August 15. The meeting was led and moderated by Michael Maximilien of IBM (aka Dr. Max).

For more details, read our recap of the meeting below.

Istio is a microservices-based service mesh, which can be described as a network of microservices that make up applications and the interactions among them. The Istio solution was developed with a view to address the issues developers and operators face as monolithic applications move towards a distributed microservices architecture.

Istio had its genesis as part of the ongoing “be-careful-what-you-wish-for” era unleashed by the rise of containers and microservices over the past couple of years, and more specifically, their deployment in multi-cloud environments. Service discovery, load balancing, and failure recovery are among the complicated tasks that become more complex in multi-clouds.

Istio was launched by Google, IBM, and Lyft, and is now being integrated into the Cloud Foundry environment. Shannon Coen of Pivotal leads the integration team. Istio was created to connect, secure, observe, and control microservices. It also works with the Envoy proxy and communications bus, hosted by the Cloud Native Computing Foundation.

Shubha Anjur Tupil presented an update on how to use Istio and Envoy within Cloud Foundry for edge routing. She said the primary motivations of the team for using Istio are to simplify the Cloud Foundry routing structure, create a unified routing tier for the Cloud Foundry Application Runtime (CFAR) and Container Runtime (CFCR) environments, and generally deliver value to customers faster.

In contrast, the team is creating a Control Plane that cleans up the orchestration layer by removing the NATS server, metadata routing API, and route emitter. When completed, it will thus present a unified routing tier with the use of a co-pilot that feeds an Istio pilot before moving onto the Envoy gateway. 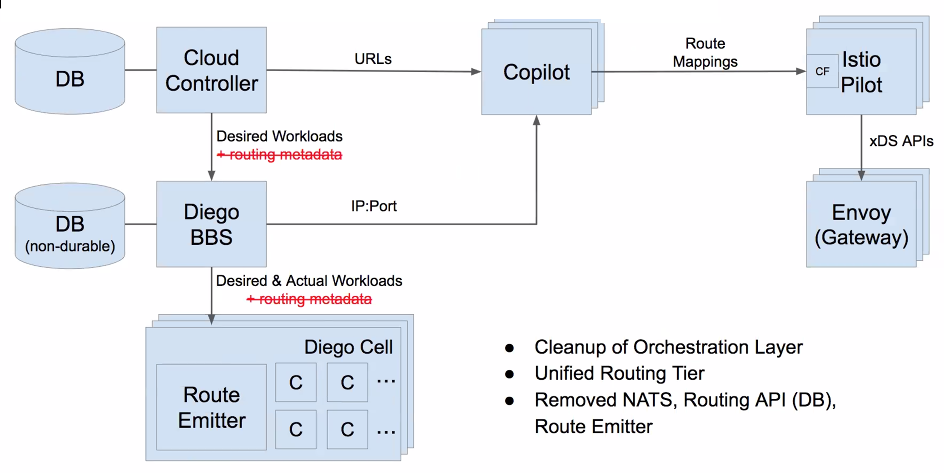 Top-level issues that remain include the mesh configuration control, scaling the control plane, and weighted routing, according to Shubha.

Julz Friedman (aka Dr. Julz) and Julz Skupnjak (aka Herr Julz) of IBM provided an update on Project Eirini, which is a Kuberenetes back end for Cloud Foundry.

“Eirini creates a droplet and then can create an image dynamically, rather than building container images directly. It provides a rapid application workflow for 12-factor apps, and it offers Kubernetes developers a way to get some of the Cloud Foundry user experience and workflow.” —Dr. Julz, IBM

Herr Julz explained that Eirini also provides Loggregator to Kube developers. He then demoed how an app appears on Kubernetes and “how we’re using buildpacks, in this case Ruby, to create a droplet.”

Herr Julz also ran some smoke tests to show the progress being made with this project. An experimental BOSH release is available.

Frédéric gave a report and said the team is working to define 3-, 6-, and 9-month roadmaps. He noted that the recent BOSH release addressed issues of links variables and new features like a virtual machine hotswap. “In doing this, you no longer have to delete the old one first,” he stressed.

Frédéric also reported SUSE’s Fissile proposal, which aims to make the OCI images from BOSH releases, has been accepted into incubation, and there will be some discussion about how it can fit into the BOSH roadmap.

The summit in Basel

The call also included a reminder that the Cloud Foundry Europe 2018 Summit is coming up in Basel, Switzerland, October 10–11. Chip Childers, CTO at the Cloud Foundry Foundation, said there is “an awesome agenda” with a lot of talks about the existing Cloud Foundry projects and their direction. As the registration will cap out at some point, he urged people interested in the event to sign up.

Chip also noted that the community is now participating with the IBM’s #CallforCode program, a worldwide initiative to create and support first-responder projects to natural disasters.

Next month’s call will be held at 8 a.m. Pacific Time on Wednesday, September 19. As always, anyone interested in Cloud Foundry is welcome to participate. Information can be found at #cab within the Cloud Foundry Slack channel.

Artificial Intelligence in Enterprise: Basics, NLP, and Chatbots
Next