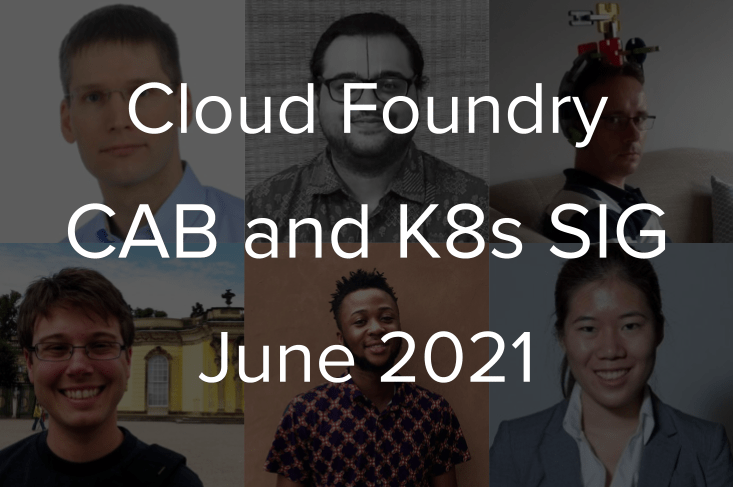 by Carlo GutierrezJune 17, 2021
The summit to be held on July 21–22, and the Technical Oversight Committee was formed. The SIG meeting discussed how to replicate the cf push experience.

A few more weeks before the summit

This month’s Cloud Foundry Community Advisory Board (CAB) meeting featured a couple of updates from the Foundation. The call was moderated by Ram Iyengar from the CF Foundation. The CAB meeting was quite brief, so we’ve incorporated some other ecosystem updates that happened during the month, as well.

The virtual summit will be held on July 21–22, the schedule has become available recently. With only a few weeks left before then, Ram invited members of the community to get in touch with the Foundation staff to coordinate any announcements regarding feature releases, new initiatives, etc. There will also be an already traditional Unconference day on July 20 before the summit. Currently, the organizers are looking forward to more Talk proposals and topics for the Open Space Discussions.

The elections of the Technical Oversight Committee also just ended. According to the results published today, the very first committee will be represented by Eric Malm and David Stevenson of VMware, Jan von Loewenstein and Stephan Merker of SAP, as well as Lee Porte of GOV.UK PaaS.

Prior to the CAB call, the cf-for-k8s special interest group (SIG) held their first meeting for the month of June. Much of the conversation centered on how to emulate cf push on a Kubernetes-native client. Bernd Krannich of SAP moderated the SIG call, read the details below.

In a nutshell, cf-for-k8s combines prominent Cloud Foundry developer APIs with Kubernetes, Istio, and other open-source technologies. The project aims to improve the developer experience for organizations running Kubernetes.

During the K8s SIG call, Kieron Browne of VMware shared his thoughts on how custom resources can be utilized to enable Kubernetes-native clients to experience the cf push process.

“If we’re doing Cloud Foundry on Kubernetes, it’s a great opportunity to provide operators and developers with a Kubernetes-native way of deploying their apps. It should feel as easy as doing a cf push. You should be able to create a custom resource that has the information you would have in your app manifest and anything you pass onto the command line, then kubectl apply. That should be processed, as if you just did a cf push, where you just leave it, things happen, and eventually an app will be running in the end of it.” —Kieron Browne, VMware

While Kieron’s work is still experimental, it resonated among the community. Angela Chin of VMware chimed in on his idea, particularly in using a single custom resource approach.

“It’s appealing to have that single entry point that gets created via an API shim or applied directly via kubectl. You get the mapping of how all the resources interact with each other.” —Angela Chin, VMware

Anyone interested can read more about Kieron’s design and provide feedback.

The cf-for-k8s special interest group discuss how use custom resources to emulate the cf push experience.

From the video below, you will learn how to install cf-for-k8s on Microsoft Azure.

In this interview, Chip Childers tells about what to expect at the upcoming Cloud Foundry Summit 2021.