Provide a platform-agnostic middleware layer and ready-to-use cloud services to accelerate the release cycle, enhance security, and reduce complexity of IoT apps across a variety of industries.

Based on Cloud Foundry, the Bosch IoT Cloud is reported to connect more than 6 million devices and machines. Current applications include detection of parking spaces, insurance rebates for careful drivers, connecting smartphones with heating, lighting, and smoke alarms at home. Backed up by Eclipse IoT to address specific IoT needs, the open cloud platform enables Bosch and its partners to develop IoT solutions for energy, construction, logistics, agriculture, as well as automotive and manufacturing industries.

Lessons learned:
What else is in the stack?

Robert Bosch GmbH is a 130-year-old German industrial giant, globally known as a supplier of automotive parts and solutions, high-end home appliances, and power tools. The company employs roughly 390,000 associates worldwide (as of December 31, 2016). In 2016, its revenue reached 73.1 billion euros.

Since 1995, Bosch has produced about 7 billion sensors for microelectromechanical systems (MEMS). Every day, about 4 million MEMS sensors come out of the company's facilities.

Addressing the issues in IoT

The number of devices connected to the Internet of Things (IoT) is growing at an exponential rate, reported to have reached more than 8 billion in 2017. Moreover, the figure is expected to increase up to 20 billion by 2020. The implications are already evident and raise certain concerns, especially among those companies that specialize in IoT solutions.

Steffen Evers, the Head of Open-Source Services at Bosch Software Innovations, highlights two major problems in the IoT space. Firstly, connected devices are produced by a lot of different manufacturers, cater to different purposes, and use a variety of protocols. This means that devices lack unified standards.

“The current situation today is typically that you have one stack for one solution.” —Steffen Evers, Bosch

Secondly, connected devices generate vast amounts of telemetry (e.g., temperature, speed, etc.), as well as command and control data. As new smart devices and machines join the network, this amount of data also increases. A Cisco white paper estimates that the total data generated by any IoT device annually will reach 600 ZB by 2020, up from 145 ZB in 2015.

Since 1995, Bosch itself has produced about 7 billion sensors for the MEMS systems. Approximately 4 million MEMS sensors come off the company’s conveyors daily. To handle the data from the devices and unify various protocols the sensors use, the Bosch realized the need for a middleware layer. According to Steffen, this would help to enable cross-domain and cross-vendor support, covering most—if not all—IoT devices, both existing or likely to appear in the future. To address the need, the company developed Bosch IoT Suite. 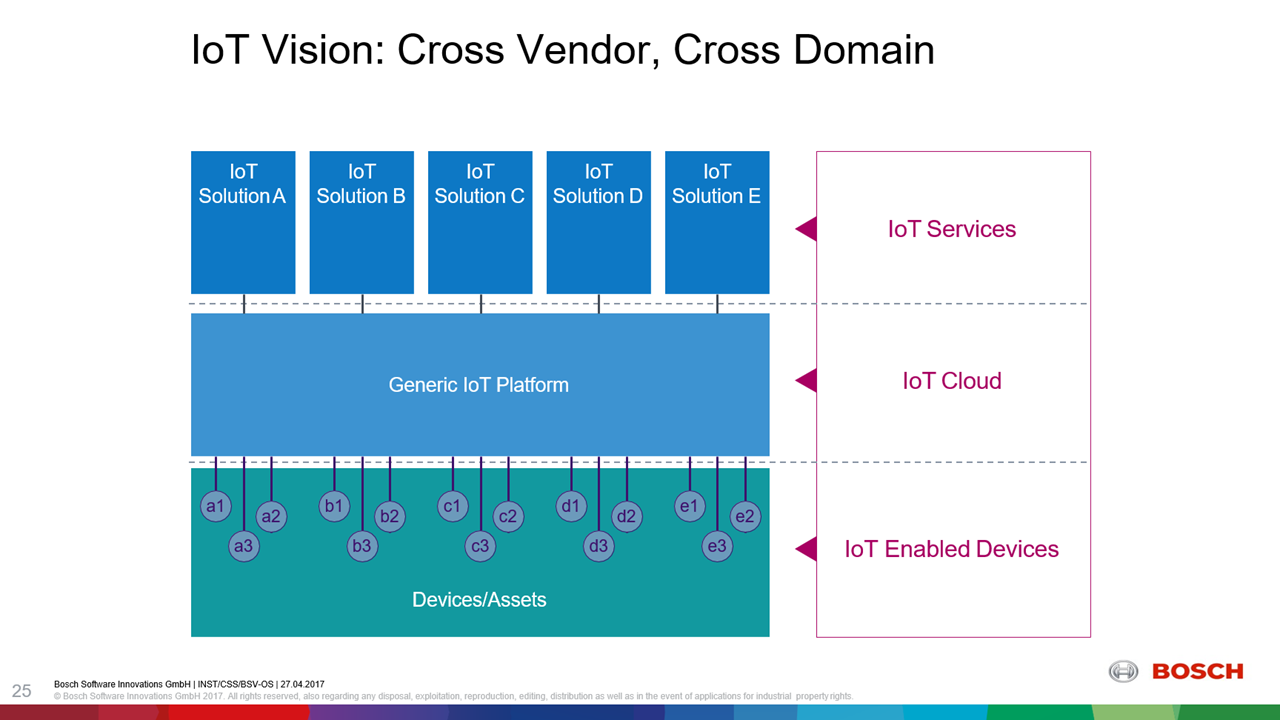 Looking for a way to make the suite available as a PaaS to its partners and customers, Bosch decided to employ Cloud Foundry. 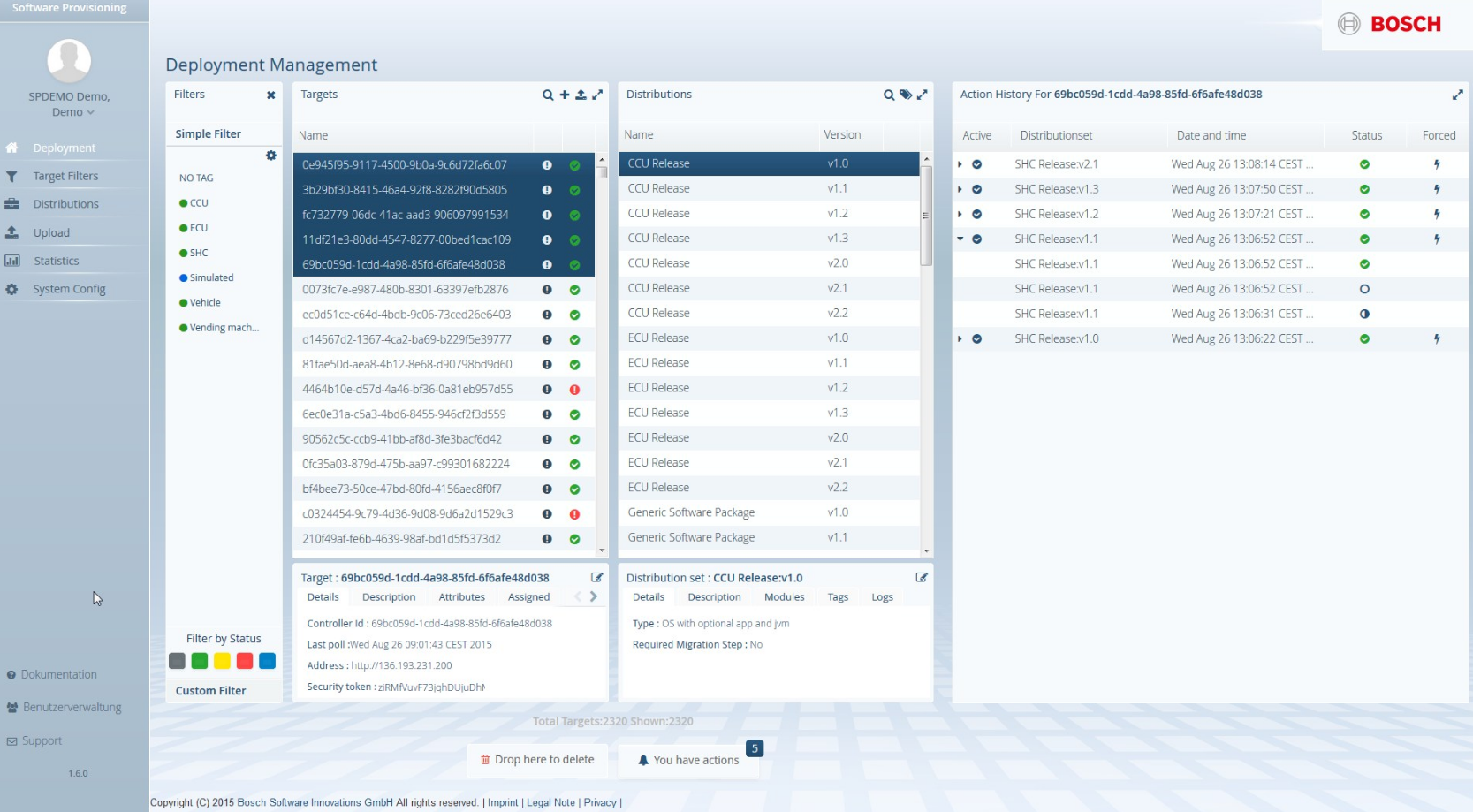 A deployment view for Bosch IoT Rollouts within the suite (Source)

To deliver Bosch IoT Suite as a PaaS to its customers and partners, the company built Bosch IoT Cloud. Rather than opting for a private third-party solution and potentially getting vendor-locked, the company made a decision to build a cloud platform of its own.

The platform was meant to ensure scalability of the services and their compatibility with a wide range of IaaS providers, so that the company’s customers were free to deploy their apps to an infrastructure of choice or change vendors smoothly. For the purpose, Bosch IoT Suite was integrated with Pivotal Cloud Foundry. The cloud is operated in the company’s computing center near Stuttgart. 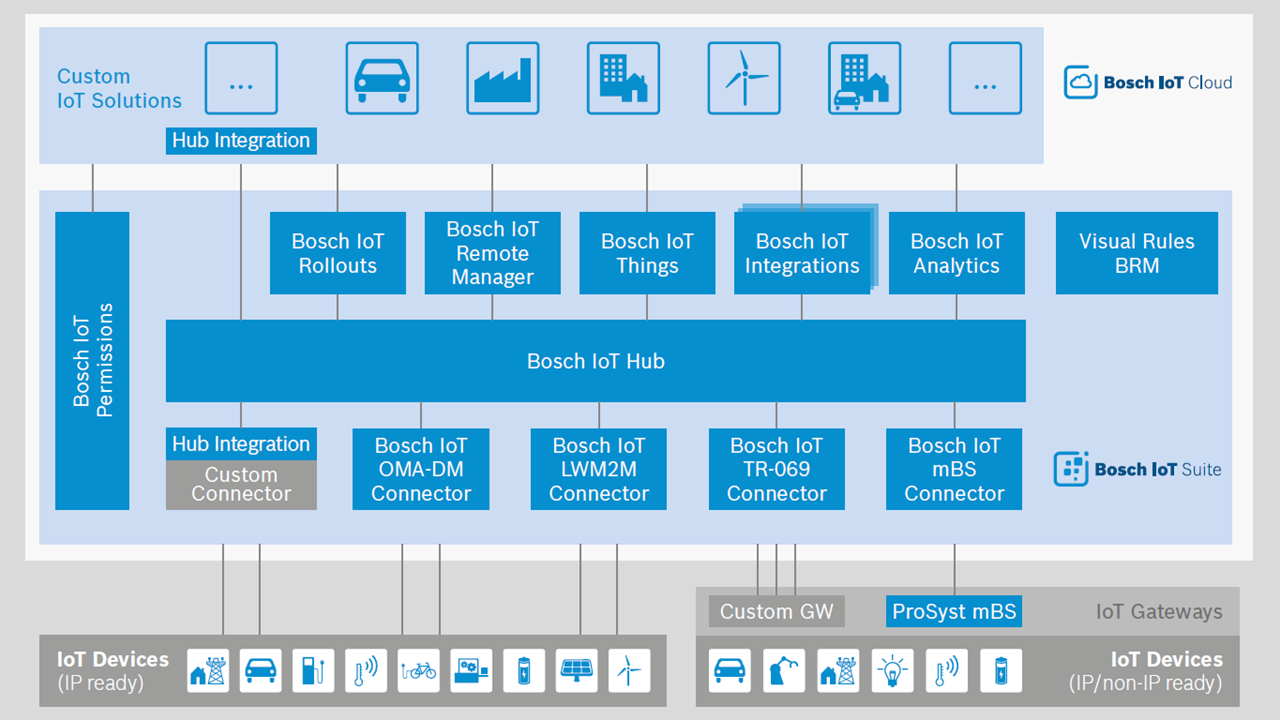 According to Stefan Ferber, “one major reason (why we picked Cloud Foundry) was the ability to deploy on multiple clouds or to switch cloud vendors.” 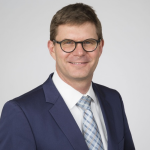 “For our customers, a cloud-enabled software platform is the foundation for growth in the Internet of Things. The software services we offer break down the Bosch IoT Suite into easily reusable microservices that cater precisely to IoT developers’ requirements.” —Stefan Ferber, Bosch

The launch of Bosch IoT Cloud was announced on March 9, 2016 at the Bosch ConnectedWorld event in Berlin. In September 2016, Bosch became a Silver member of the Cloud Foundry Foundation. Joining the community, the company aspires to assist in improving the features and usage of the PaaS for IoT scenarios.

Initially tested on internal projects, the Bosch IoT Cloud is offered to external customers and partners starting from 2017. In February 2017, Bosch and IBM announced a collaboration to make Bosch IoT Suite available on IBM Bluemix and IBM Watson for the companies’ customers.

As a result of this partnership, for instance, auto manufacturers got the opportunity to schedule and organize software updates to millions of vehicles in a secure and managed fashion without the need to bring the vehicle to a workshop. White goods manufacturers can also remotely send updates to batches of thousands of house appliances, granting consumers access to the latest updates, services, and offerings (e.g., automatic reordering of detergent). 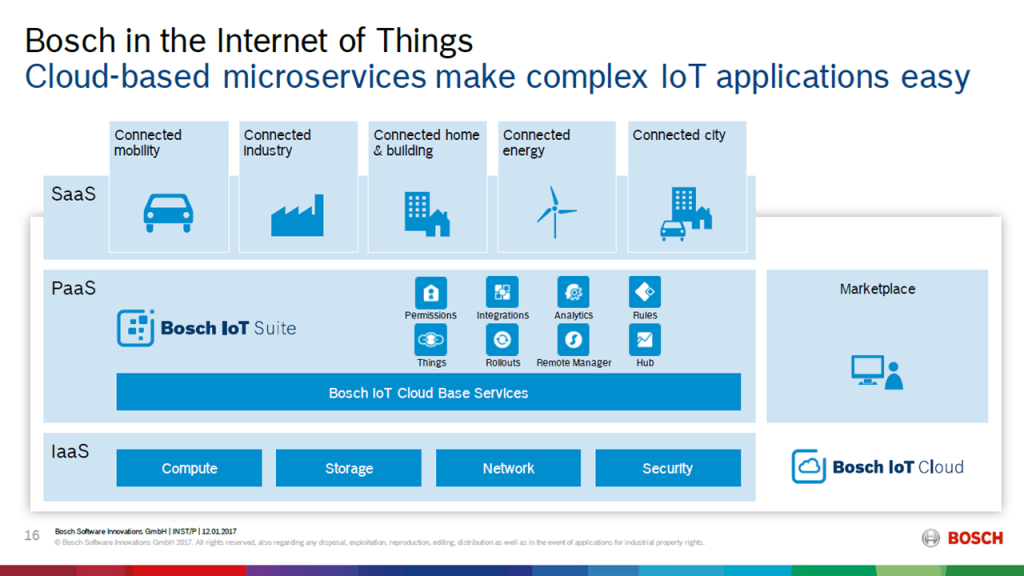 “Bosch is a major industrial IoT company that supports a wide range of devices, in many different industries, such as automotive, manufacturing, and home appliances. We believe the best way to support this complex environment is to base Bosch IoT Suite on open-source components and open standards.” —Stefan Ferber, Bosch

At Cloud Foundry Summit Europe 2016, Executive Director at the Eclipse Foundation Mike Milinkovich delivered a presentation on how Cloud Foundry and Eclipse IoT services work together. 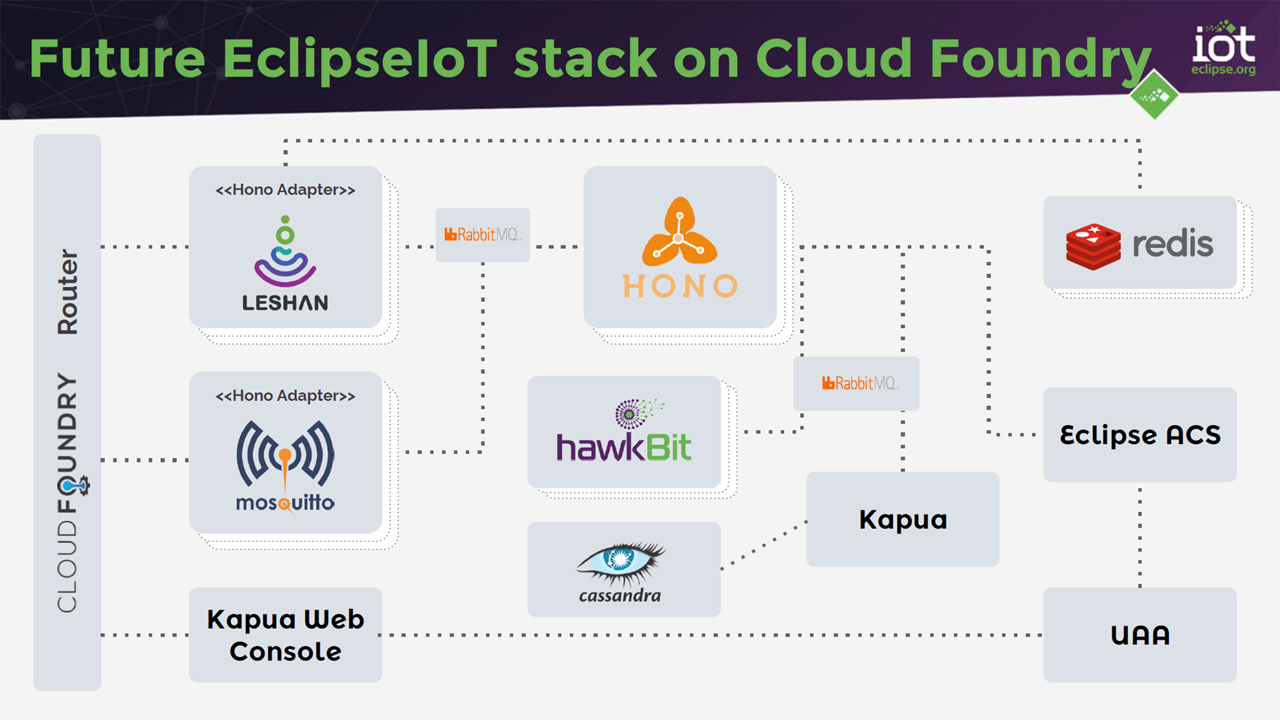 The achievements and challenges

Pivotal CF provided Bosch with ready-to-use cloud services that helped to facilitate and speed up building, testing, deploying, and scaling IoT apps. Making use of the platform enabled the company to: 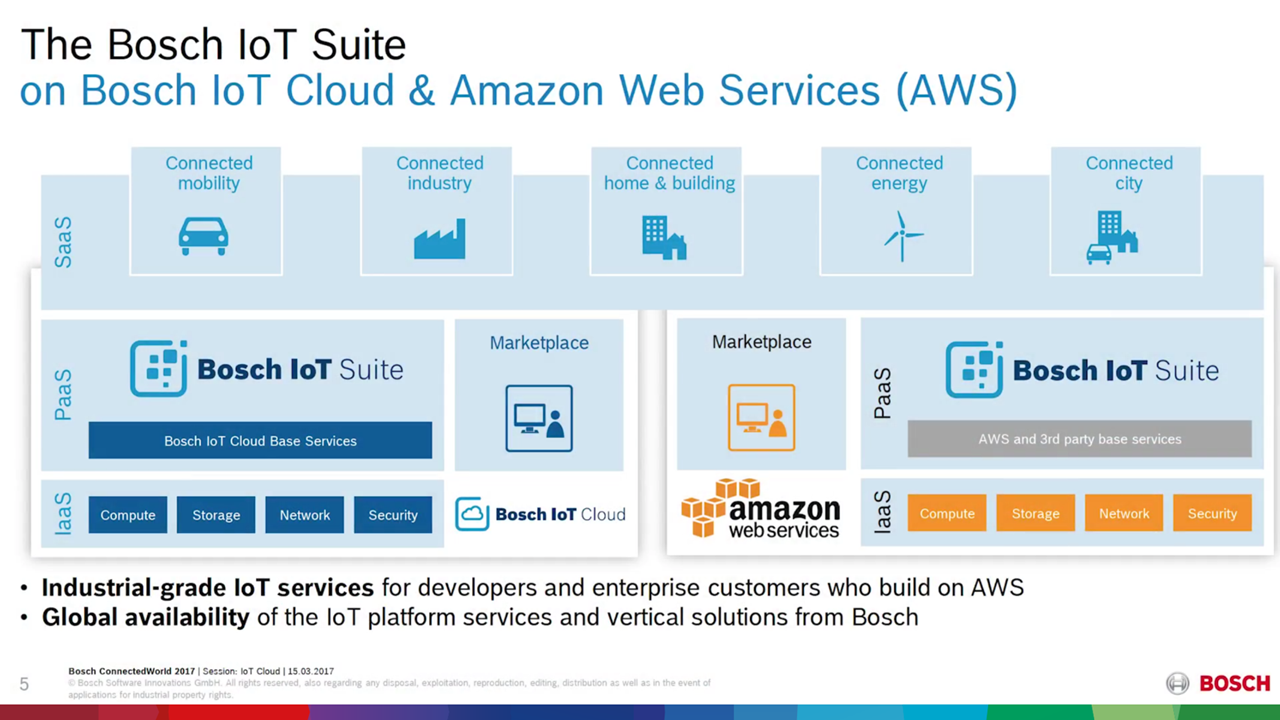 The architecture of Bosch IoT Suite on AWS (Source)

While adopting Cloud Foundry, Bosch faced some specific challenges within the IoT space:

According to Bosch, it is planning to extend the initial set of services available via the platform through establishing new partnerships for the purpose.

Bosch IoT Cloud enabled the company and its partners to deliver a variety of innovative solutions for connected cars, smart homes, supply chains, and manufacturing.

Bosch is also working with IBM to explore the potential uses of the blockchain technology in IoT. In three months, the collaboration has resulted in a proof of concept for countering fraudulent automotive parts. The solution is based on Hyperledger Fabric available in IBM Blockchain. The offering is delivered through the IBM Bluemix platform—another Cloud Foundry distribution. 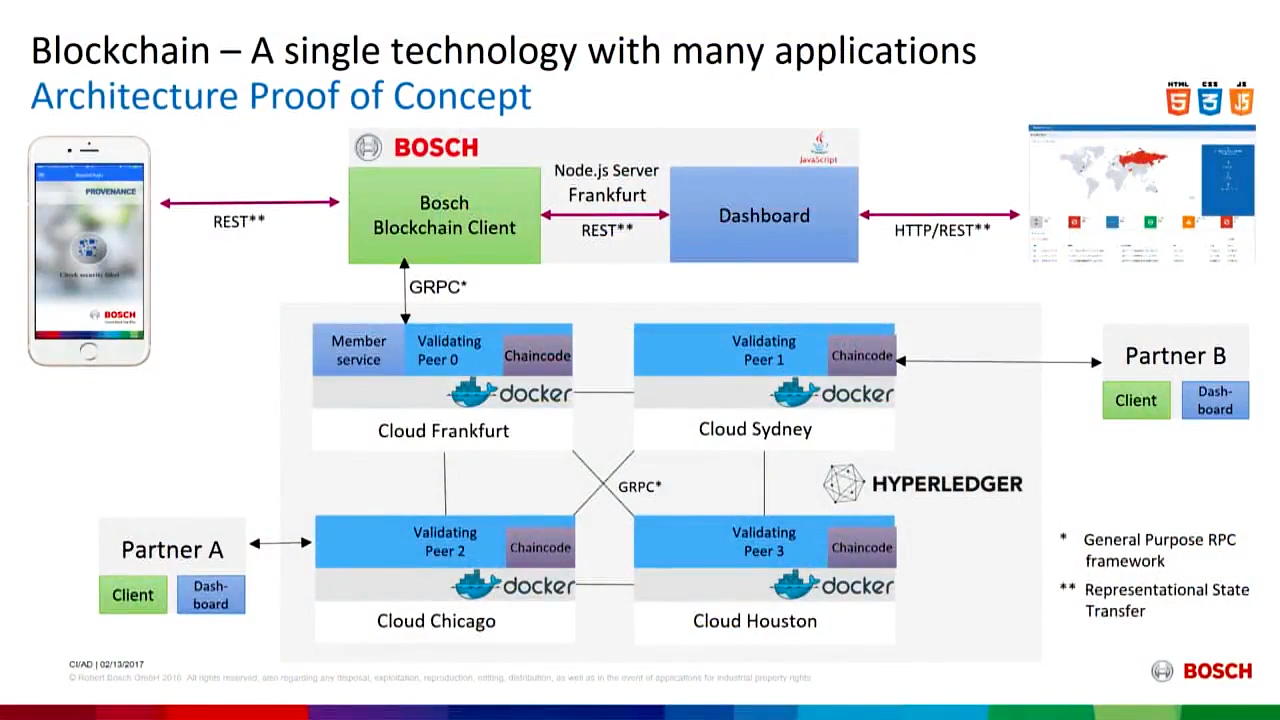 An architecture for a fraud detection proof of concept (Source)

Bosch is also investigating how it can use blockchain to improve other processes and services in logistics, supply chain, sharing economy (e.g., car sharing), community-based parking, etc. In addition, blockchain can serve to ensure the accuracy of odometer and mileage data, as well as for creating a digital logbook with data like this.

Another example is the Secure Truck Parking app, which is available through the SAP HANA Cloud Platform—an open PaaS integrated with Cloud Foundry. Using the SAP Vehicles Network, the app assists truck drivers in finding and reserving parking spaces in advance. According to Bosch, truck drivers, on average, visit four parking lots before finding a vacant spot. The solution not only saves time, but also provides additional security by choosing from those offerings that include complementary services, such as CCTV monitoring and 24-hour guards. 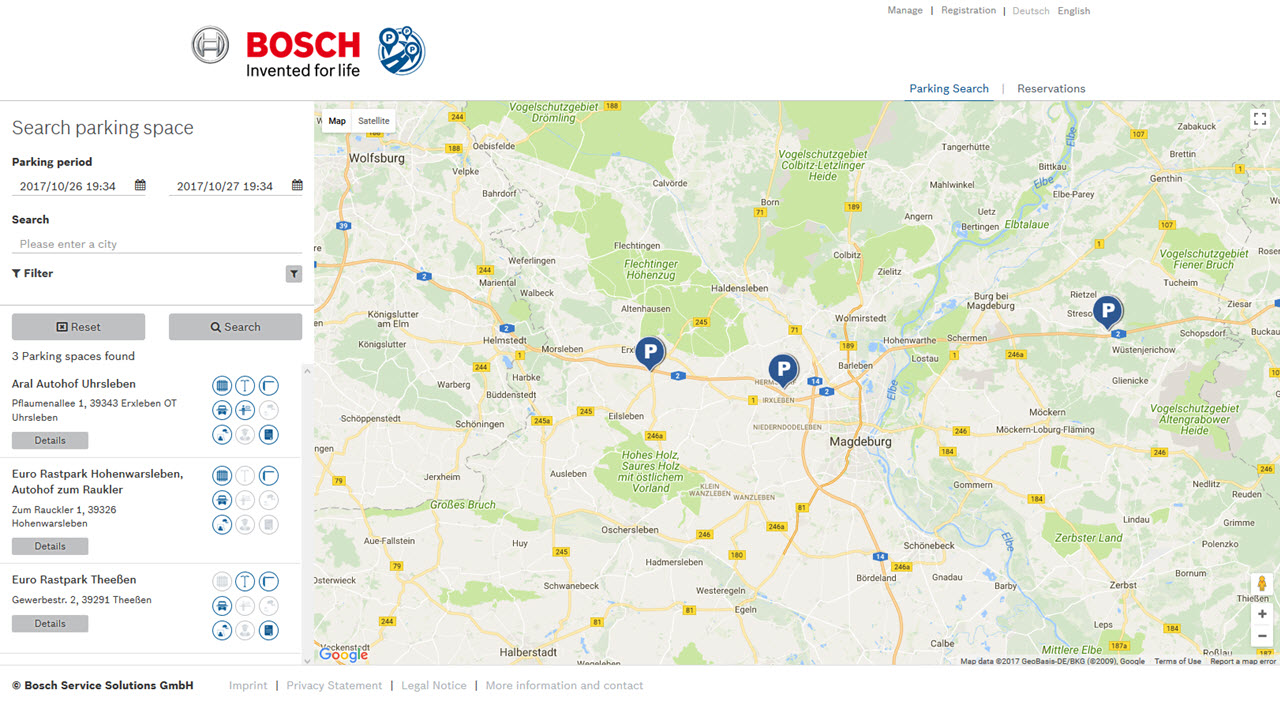 The web interface of the Secure Truck Parking app (Source)

Realizing that software has become a real power today, Bosch is determined to make the best of it to drive innovations and improvements across its workflows and products. The company is an example of how an established business with more than a 130-year history can not only survive the digital disruption, but gain more influence. 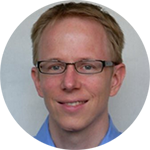 Steffen Evers leads the Open-Source Services team of Bosch Software Innovations. The team provides development services for open-source software (OSS) that is essential for Bosch and consults on strategy, community work, software management, and compliance processes in the OSS area. Steffen has researched, taught, and promoted open-source development and supported various companies in the use of OSS to achieve their business objectives. 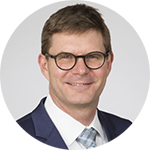 Stefan Ferber is Vice President for Engineering at Bosch Software Innovations in Germany. He oversees development of the company’s open IoT platform—Bosch IoT Suite—with 130+ developers in Berlin, Immenstaad, Singapore, Waiblingen, and Bangalore, leveraging a strong network with corporate and open-source partners. Stefan also represented Bosch in the German “Industrie 4.0 Platform” and is a member of the European “Internet of Things Council.” 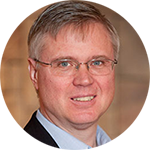 Mike Milinkovich is the current Executive Director at Eclipse Foundation. Since April 2012, he has been on the board of the Open Source Initiative, which is a non-profit organization dedicated to promoting open-source software. Mike has also served as a Vice President for Oracle and WebGain and as the Strategy Manager for IBM’s Visual Age IDE—the ancestor of Eclipse. He is a highly recognized figure in the Java community and a nominee for Top Java Ambassador. Mike is known for advocating OSGi as a solution for modularity in the Java programming language and against software patents.
The post is written by Carlo Gutierrez, Alesia Bulanok, and Alex Khizhniak.