The Beat Goes on with Cloud Foundry 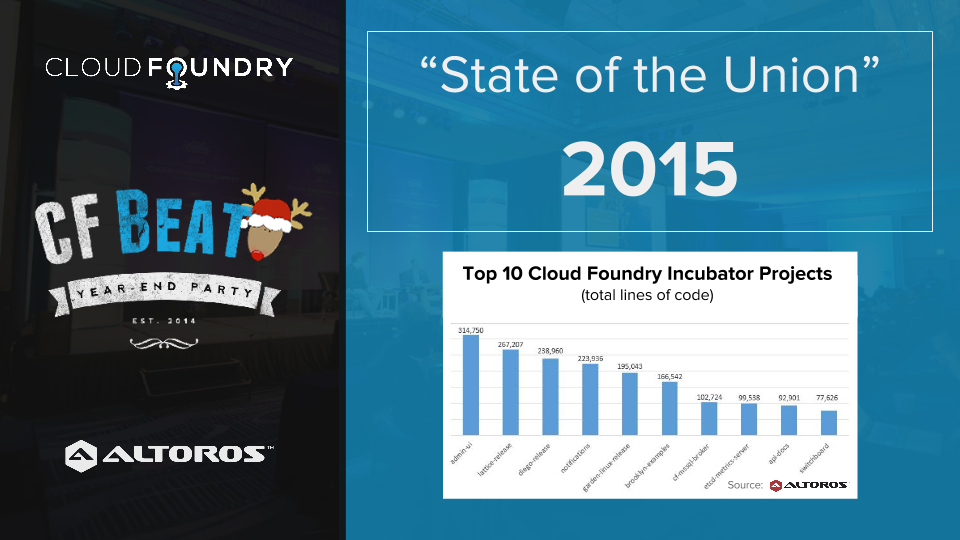 by Roger StrukhoffDecember 16, 2015
Did you know that the CF Foundation grew by 83% with 25 new members in 2015? Now, the CF community numbers more than 30,000 participants in 48 countries. Find out what the Top 10 CF incubator projects are and some more interesting statistics.

It’s been a dynamic year within the Cloud Foundry community, one that can be measured in several intriguing ways. Our research staff at Altoros has uncovered several marvelous “fun facts” about what’s transpired with Cloud Foundry this year.

For example, more than 3 million lines of code were written (as of December 3) within 159 projects in the incubator repositories. The Top 10 projects (total lines of code) are illustrated in the diagram below. 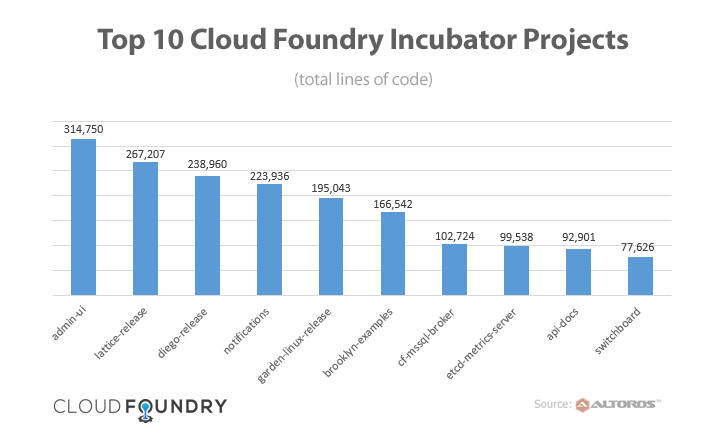 This impressive code development occurred as the Cloud Foundry Foundation’s membership increased from 30 to 55 members over the course of 2015, an increase of 83%. Almost half of the member companies are based in Silicon Valley or San Francisco. North America overall has 70% of the members, with about 25% in Europe and 5% in APAC.

Thinking less numerically, what were some notable new projects? We see Spruce, for example, with a focus on building BOSH manifests in templates. The Azure BOSH CPI is another highly significant new project, along with CF Swagger, the work on Diego (including the Windows installer in late 2014), as well as the origins of Lattice in late 2014 with work continuing in 2015.

Meanwhile, the community’s strength was apparent in a group of three Cloud Foundry Summits this year:

Cloud Foundry’s successes will be celebrated on Thursday, December 17, from 5 pm to 9 pm at the second annual CF Beat event and party, to be held at HPE headquarters. Several lightning panels will address the big issues within the world of Cloud Foundry.

Altoros’s CEO Renat Khasanshyn will present an overview of how the CF community evolved since last year, providing more engaging facts and figures. Be there!

A Cloud Foundry Fireside Chat with Dr. Max of IBM Cloud Labs
Next