by Roger Strukhoff, Carlo Gutierrez, and Alex KhizhniakJune 6, 2016
The bank's NEXEN platform now has 500 developers and 5,000+ VMs deployed in a cloud environment that includes numerous OSS components.
Why read this?
Use Case for Cloud Foundry:

Banking: Serve as a platform within an open-source, cloud environment in which better, more efficient ways of serving internal and external customers can be created.

The platform greatly reduces the amount of time it takes to provision things to the cloud—from weeks and months to hours or a day.

The organization has had many years to learn what works and what does not work, as it started with a Java-based PaaS in 2001. Along the way people have learned to make REST APIs open to everyone, to be consistent with them, and to consider the monetization of the API.

Even though this digital transformation initiative has 500 developers and reaches all the employees and clients of this very large organization, the core team that manages the infrastructure has only between 10 and 15 people.

BNY Mellon (Bank of New York Mellon Corp.) has revenues of more than $15 billion per year, with $27 trillion under management.

The company has its roots in the oldest bank in the United States, dating back to 1784.

BNY Mellon dates its roots to 1784 and is the oldest banking corporation in the United States. Today, it generates annual revenues of more than $15 billion and has $27 trillion—equivalent to one-fifth of the global economy—under management. More than 13,000 people work within its global enterprise IT staff. 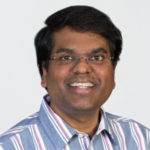 BNY Mellon has integrated Cloud Foundry into its IT infrastructure. As it seeks to digitize and transform its way of developing software and conducting business, it has created an open-source, cloud-based platform called NEXEN.

Its roots run deep. “We created a Java-based PaaS in 2001,” according to , former Managing Director and Global Head of Architecture and Engineering at BNY Mellon. “We then converted to open source in 2012, have built out an open architecture, and are now building DevOps capability into our organization.”

BNY Mellon joined the Cloud Foundry foundation as a Gold member on May 1, 2014.

5,000 VMs and thousands of users daily 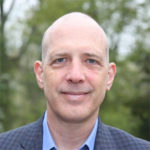 However, the business case for giving developers a machine in the cloud “is not good enough,” according to Swami. , Managing Director, Enterprise Delivery Services and Architecture at BNY Mellon, also points out that the company’s digitization strategy “is transforming the whole organization.”

David also notes that whereas in the past the company’s financial services drove the vision of the company, today it’s consumer businesses who are driving the technology.

Over time, the team at BNY Mellon have discovered many things about how it can and can’t run an infrastructure. Today, it has more than 5,000 VMs online, with a small team of 10 to 15 people running it. BNY Mellon has approximately 100 applications running in its environment, with 10,000-15,000 users per day and millions of transactions.

Within this context, BNY Mellon’s NEXEN marks the biggest technological transformation in its history. NEXEN is designed to empower company clients to change the way they operate to be more flexible, efficient and fast. The platform also includes two applications—Digital Pulse and Digital Workplace—designed to provide data-driven insights to empower clients to make evidence-based decisions faster. 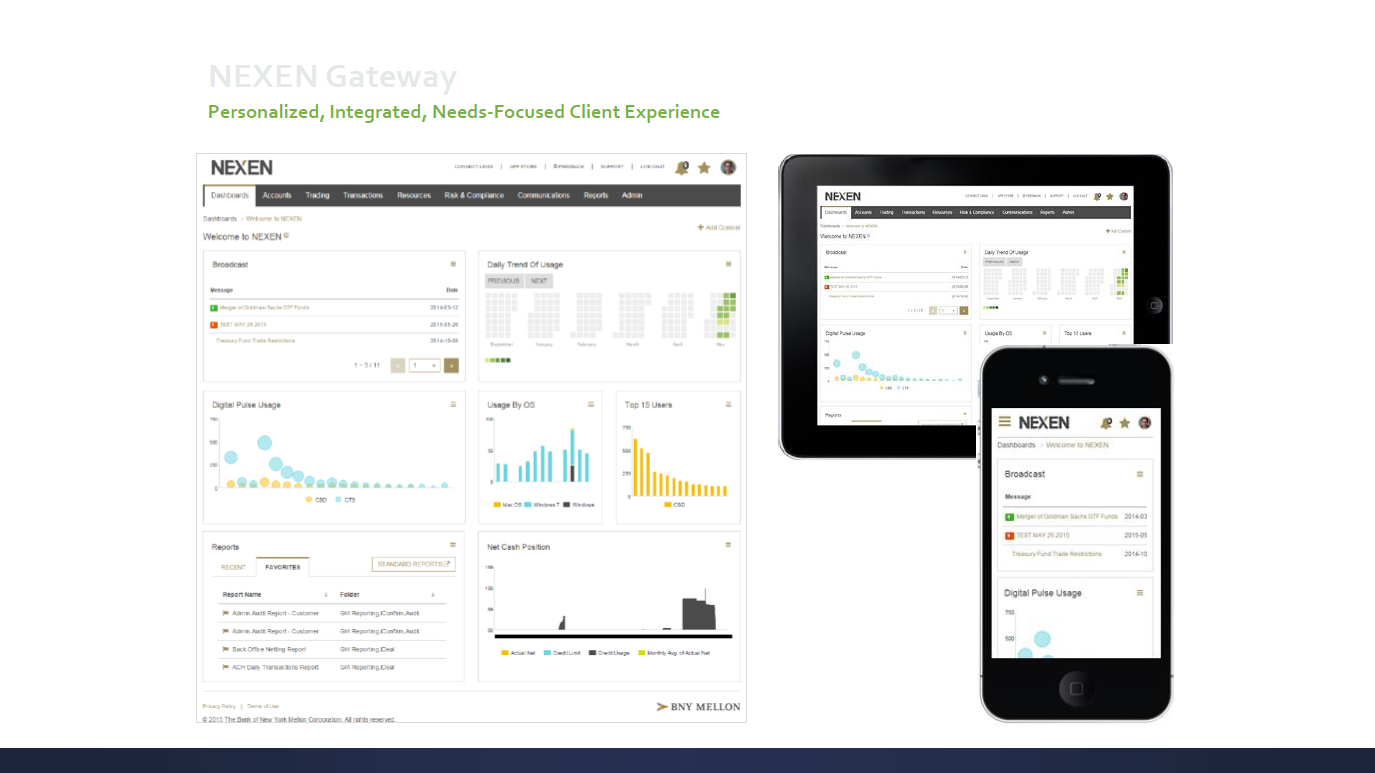 Swamy says that agile programming “has been here for some time. Yet, development methodologies are (sometimes) still sitting in waterfall environments.”

“With the cloud and IaaS, you can give developers an agile approach and the underlying infrastructure also built in an agile manner. This gives better value to the businesses we serve.” —Swamy Kocherlakota, BNY Mellon

OpenStack is the other foundational technology in this use case; Swamy describes “infrastructure on OpenStack along with Cloud Foundry is a match made in heaven.”

Innovation and APIs to the fore 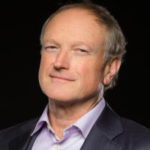 is Managing Director and Head of the BNY Mellon Innovation Center at Silicon Valley. In this role, he is building a team of software architects and engineers, and relationships with universities, startups, and the venture investment community.

He notes that NEXEN “is a collection of software and projects. It gives us an API store, analytics to assess what is happening, how it is going, and what we can do to accelerate it.”

“NEXEN is not just for geeks to deliver something, it’s about how business accepts and adopts it. If you are not driving the people part of it, you are not going to accomplish the digital transformation.” —Michael Gardner, BNY Mellon

APIs are critical to this ecosystem, and “we want to make sure there is a modern REST API available to the consumers,” Michael adds. The REST API is also intrinsic to developer productivity, allowing them to move as quickly as possible. 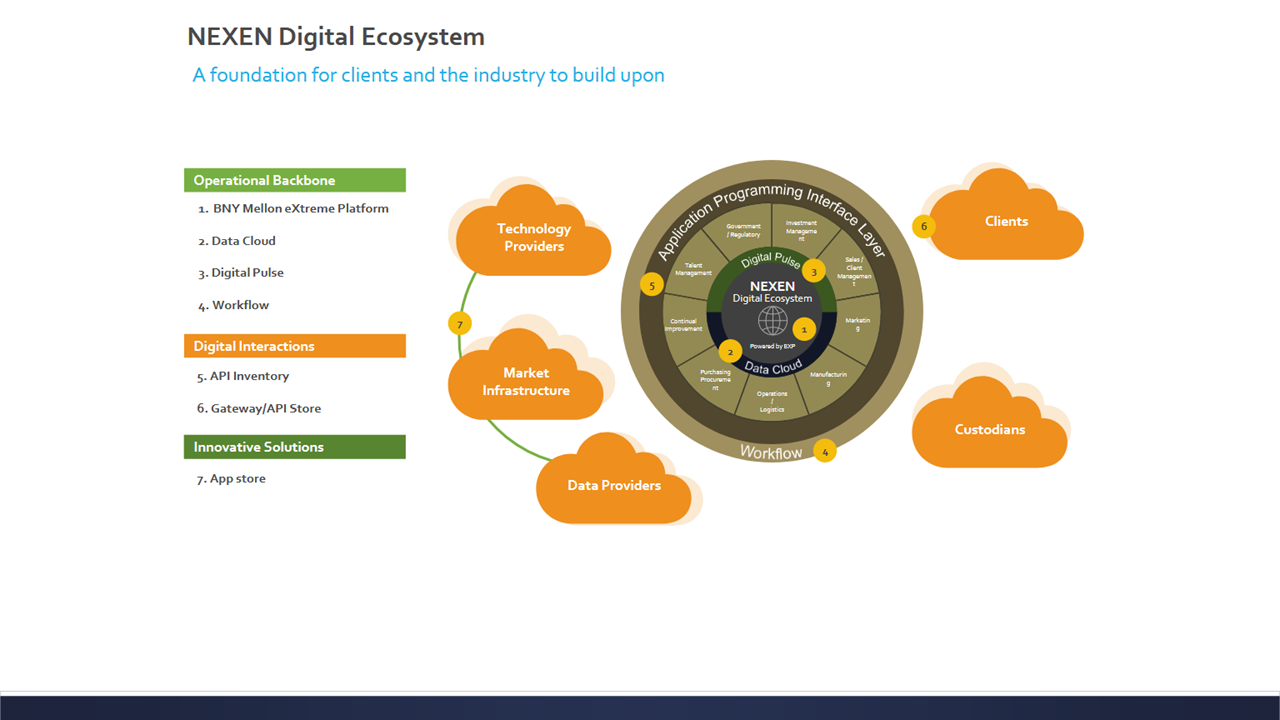 The role of APIs in NEXEN’s digital ecosystem (Image credit)

Additionally, API governance is very important and the BNY Mellon team ensures that the APIs they publish are consistent. “To a new developer who will be using API from BNY Mellon, we have to make sure that this API is rational, easy to consume, has documentation and a roadmap, that the data provided by the API is consistent with internal standards,” according to Michael. 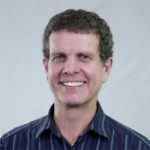 John Wetherill, Principal Architect at BNY Mellon, recently joined the 230-year-old bank and provided an overview of its work with Cloud Foundry at the CF Beat meetup.

Noting there are around 13,000 people on this organization’s IT staff, he said “we have the same problems that all large banks and financial institutions are facing today. We have been actively building solutions for these (problems) in the last 16 years.” He lists instances of what they have built, including “Java, microservices—before microservices was even a thing—and cloud. We’re heavily invested in cloud.”

John noted that the platform has been in development “for years to help us to settle our challenges.” 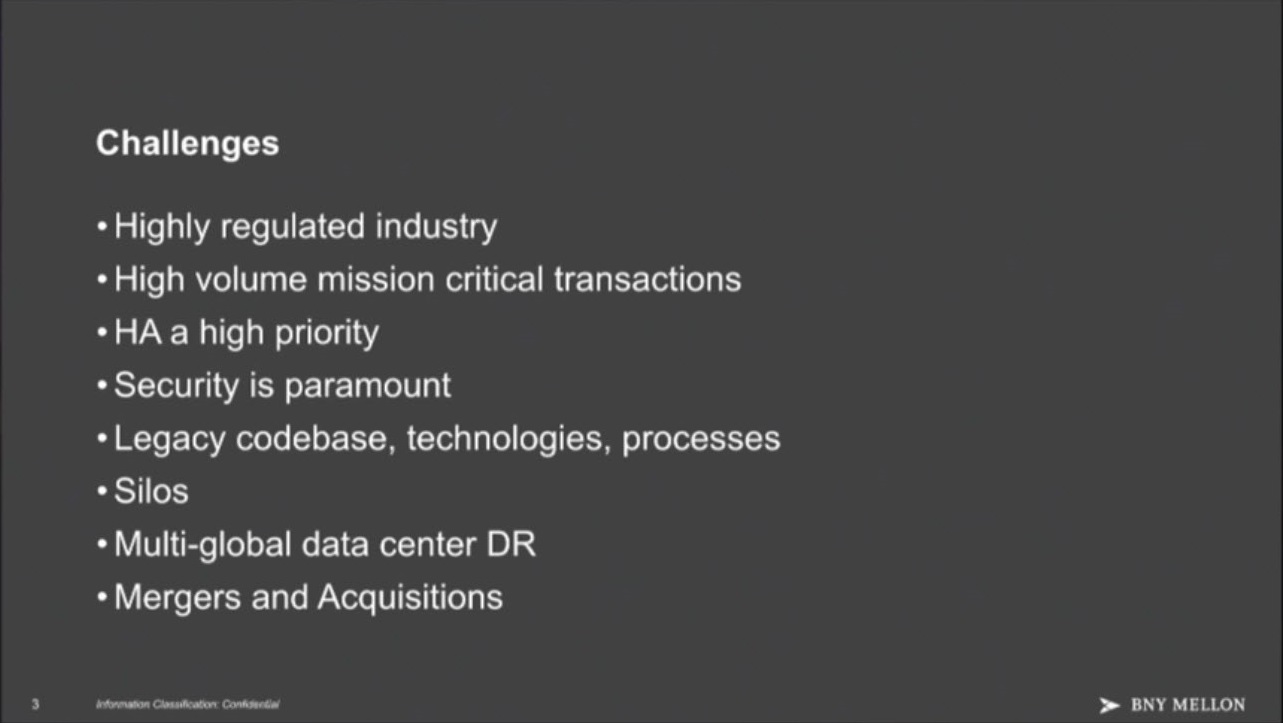 “NEXEN provides all the features that we need, all the capabilities we need to be able to provide a platform for our developers to provision the apps to our cloud, our internal cloud, in a safe and secure way.” —John Wetherill, BNY Mellon

Specifically, he pointed out how NEXEN allows the bank to greatly reduce the amount of time it takes to provision things to the cloud from weeks, months even down to hours or a day. As a counter-example, he said that in talking to executives at other financial companies and banks, “The common thing I hear is that it takes weeks, months even to get the resources that they need. The figures that are going on are something like 120 service desk tickets need to be executed in order to get a fully equipped VM online and all the parts that are needed (with it). That could take six months and that really interrupts productivity.” 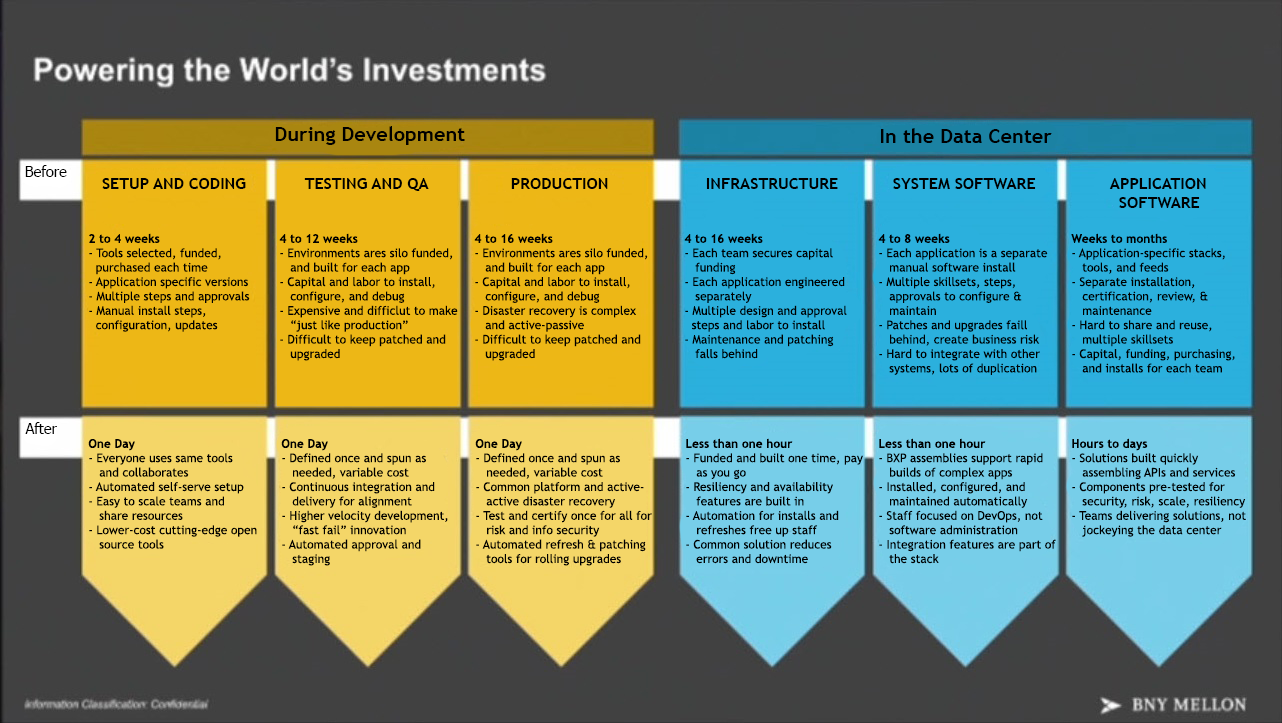 The results achieved with Cloud Foundry

The use of open-source software such as Cloud Foundry almost goes without saying, but John did say “we’re very invested in open source. There are so many reasons why (and) some of them are listed here. We’ve got a large palette of open-source technologies that are part of our platform today. You’ll notice Cloud Foundry is in there.”

Further, he said “open source is very key to our strategy and Cloud Foundry is, too. We’re incorporating Cloud Foundry into our entire provisioning process.”

“So, we’re very active in Cloud Foundry itself and likely to be more so. It allows us to build up this system without vendor lock-in. It’s really nice to have the abstraction layer above the infrastructure which Cloud Foundry provides.”

In the course of the years, BNY Mellon has learned what works and what does not work when digitazing the organization.

In terms of people, such best practicies should be implemented: 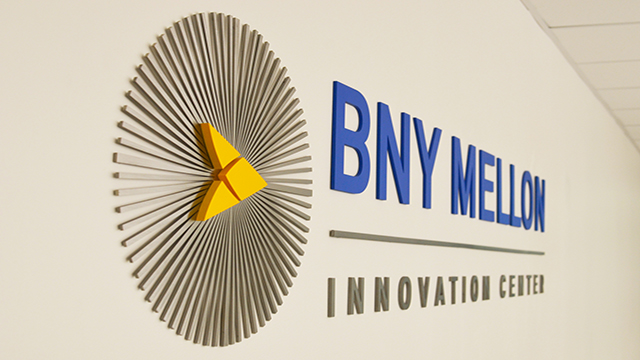 Technological aspect should be treated as follows:

As NEXEN evolves and progresses, John said “we’re looking at a lot of things. (For example), we’re actively working at incorporating some of the modern practices into our cloud development, our cloud provisioning, and deployment. We have DevOps and microservices. We’re looking heavily at containers. We’re using containerization. We’re incorporating Docker. Hybrid cloud is very important for us for its ability to have apps spanning multiple clouds. All these things are important key points in our strategy to make sure we can deliver rapidly.”

Here is a discussion of the project from Cloud Foundry Summit 2014:

The post is written by Roger Strukhoff, Carlo Gutierrez, and Alex Khizhniak.

CloudOne Binds Its VPC Platform with IBM Marketplace, Bets on Bluemix Integra...
Next