by Roger StrukhoffMarch 7, 2016
Substantial progress continues to be made, but the Cloud Foundry community and ecosystem must push, push, push. Much work to be done in 2016.

“There is no force in the world that can stop Cloud Foundry from dominating the app runtime hosting business if we can get five industries completely dominated with solutions that solve very specific problems in those industries,” said Altoros CEO at the recent CF Beat meetup.

Renat cited the strength of key members of the Cloud Foundry Foundation (CFF) across the variety of industries. 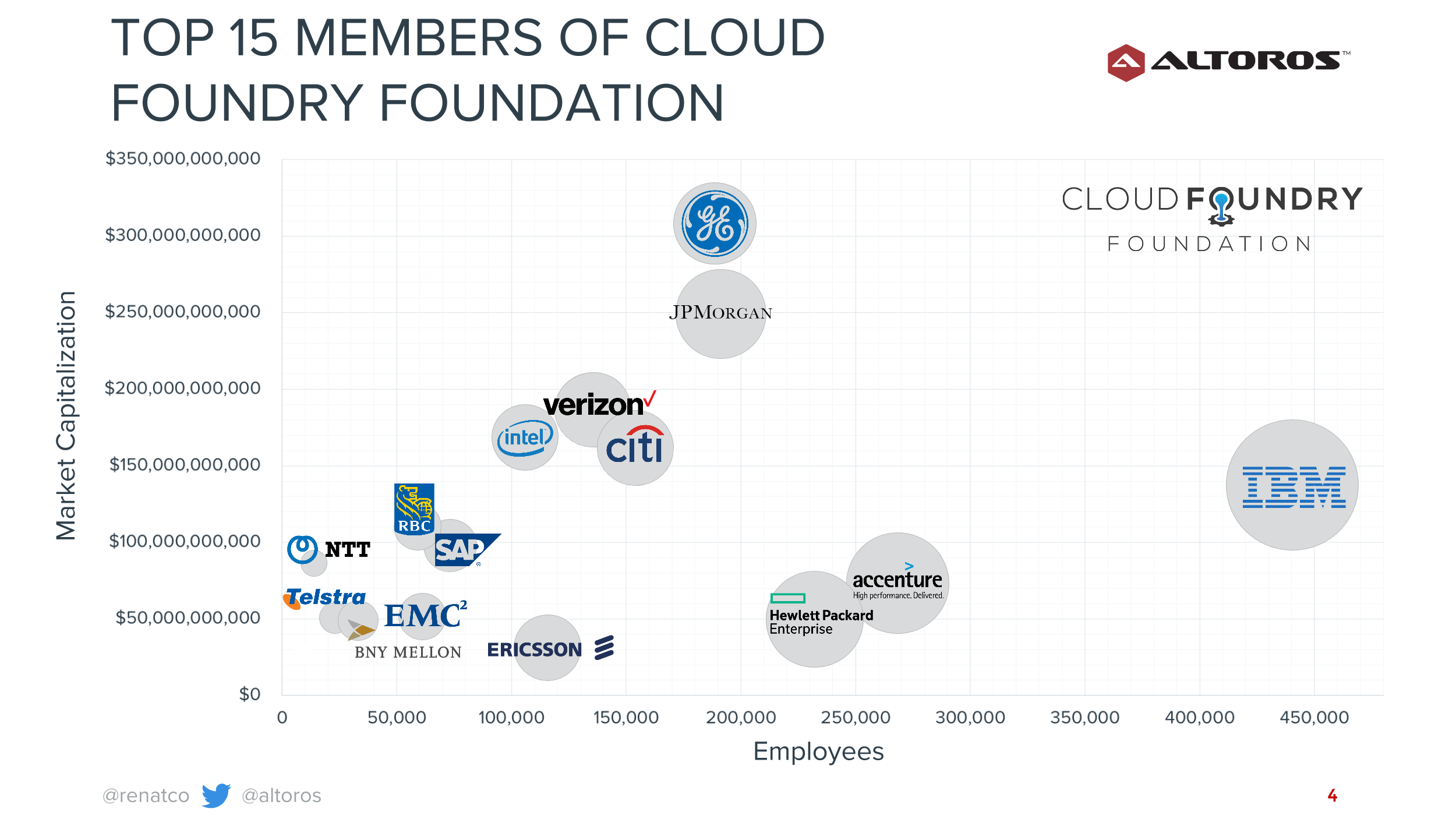 He also mentioned some strong use cases in industries such as telco, insurance, electronics, and manufacturing. And to be sure, there are a couple dozen of nice examples from those fields as well as media, banking, education, pharmaceutical, and the public sector already published at CF Live.

However the implication is, there is still much work to be done in all of those fields, along with energy, retail, real estate, construction, travel and hospitality…you name it. To employ the best-known Cloud Foundry command, the community must push, push, push.

The CFF’s also spoke at the event and stressed the same need and enthusiasm. “We have some of the largest vendors in the world driving the Cloud Foundry marketplace,” Scott said. “But for the long term sustainability of the project we must build through user companies. We need adoption by end-user communities.” 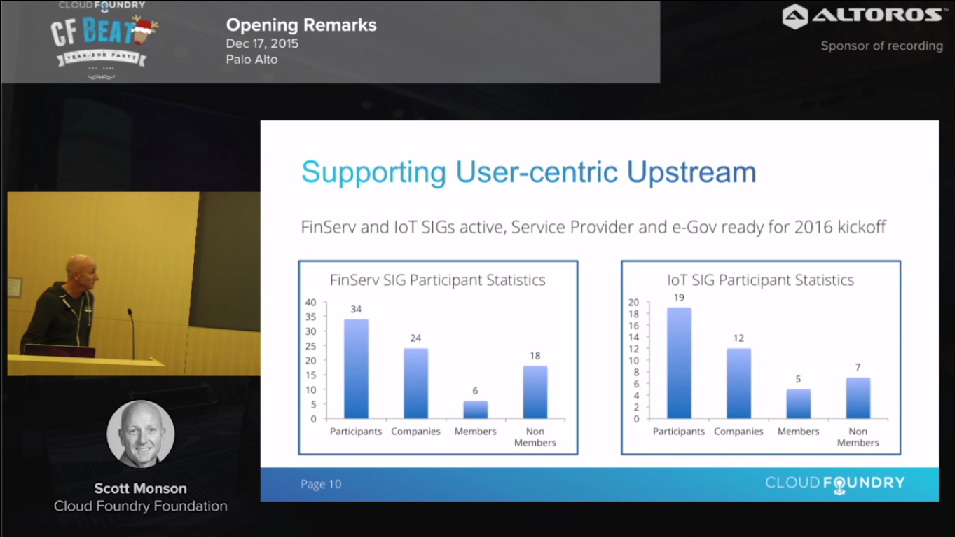 He then outlined a SIG program that’s “focused on getting user requirements back in the upstream.” A key to this idea is that when a SIG makes its requests and requirements, “it’s not just a single customer asking for something,” Scott noted, but a potentially large group of companies in the same business talking to the Cloud Foundry development community. 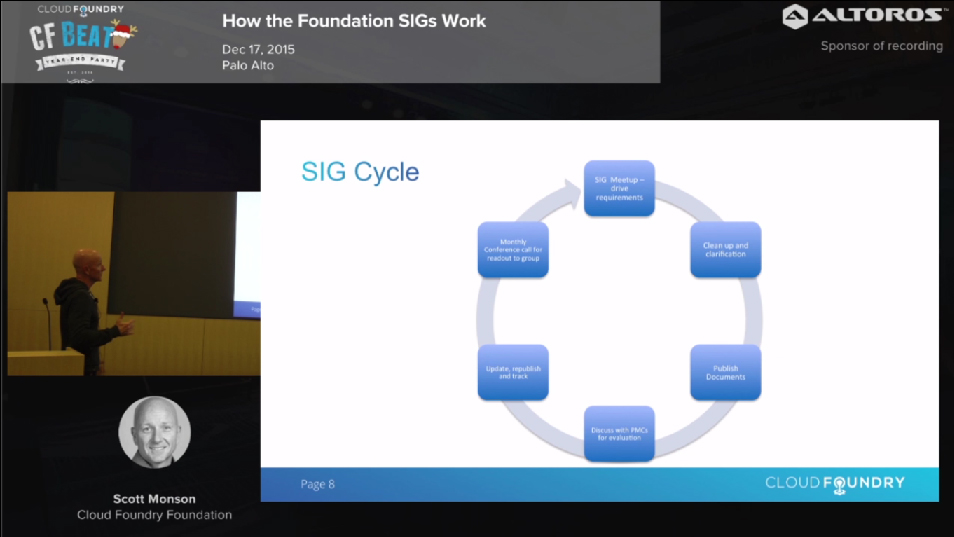 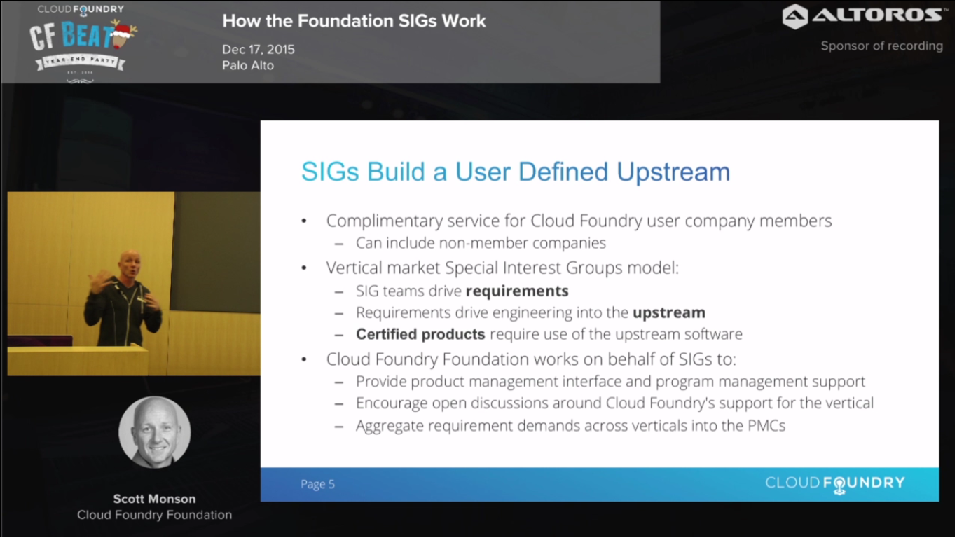 Renat also expressed the wish to “see industries which have nothing to do with technology,” but whose members want to become technology-focused companies “with the help of Cloud Foundry.”

As we (already) enter the final month of 2016’s first quarter, we can see Cloud Foundry’s further progress.

Pivotal announced a three-year deal at the tail end of 2015 with Ford Motor Company to make the large automobile manufacturer as cloud-focused as possible. The initiative is described by Ford as a “digital evolution (that’s part of Ford Smart Mobility, the plan to take the company to the next level in connectivity, mobility, autonomous vehicles, the customer experience, and data and analytics.

Two Community Advisory Board calls (February CAB call and January CAB call) have been held this year, with a number of developments announced during them. Meanwhile, session submissions have been flowing into the CFF, as we prepare for the Cloud Foundry Summit May 23-25 in Santa Clara, CA. The program is expected to be announced soon.

And TIBCO, the venerable billion-dollar middleware company with strong analytics from Palo Alto, CA, joined the CFF as a member just a few days ago.

The CF Foundation in Las Vegas

Meanwhile, CFF CEO and VP of Technical Evangelism were seemingly ubiquitous at the recent IBM InterConnect event in Las Vegas, which drew 24,000 attendees from around the world.

Sam’s presentation was one of the highlights of a pre-conference Open Tech Summit, attended by several thousands of people on a Sunday night.

“This is the best time in history to be a developer and the best time for Open Source,” Sam proclaimed to much affirmative applause. He advocated the need for speed and continuous delivery and rhetorically asked how can an enterprise develop 500 new services per year, which is what leading Cloud Foundry adopters are doing.

Cloud Foundry had 500K lines of code just a couple of years ago, “but now some individual projects are that large and the total code base is more than 3 million lines of code,” according to Renat’s remarks at CF Beat. He estimated that if one were to start this project from scratch and recreate it, “you would spend maybe $50 million to get this code base.”

So we have the technology. We have the force. We just need to keep pushing.

How Can We Get Enterprise Developers Fired Up About Cloud Foundry?
Read More
723

Cloud Foundry and IoT Concerns: The Need for Standardization and Transaction Authentication
Previous

How Can We Get Enterprise Developers Fired Up About Cloud Foundry?
Next