How Can We Get Enterprise Developers Fired Up About Cloud Foundry?

by Carlo GutierrezMarch 4, 2016
To date, Cloud Foundry adoption within an enterprise has been more of a top-down model in many cases. How can the Cloud Foundry community get things to move bottom-up the way Docker has?

At the CF Beat year-end panel, Renat Khasanshyn of Altoros welcomed Roger Levy of MariaDB, Alex Rubin of IBM, and Sachin Garg of Adobe. They discussed the challenges and opportunities of Cloud Foundry adoption within enterprise, how to trigger developers’ interest towards CF, what the reasons for developer resistance are, etc.

Renat started the discussion in a rather ominous way, noting that “the majority of enterprise developers don’t know what Cloud Foundry is. How can we solve this problem within the enterprise, so we can have developers getting started on it, so that initiative comes from the developers and not from the top?”

Roger echoed the concern by stating, “from my own experience with apps, it really requires the developers. There’s education evangelism and the more you can get developers educated to understand why it’s to their benefit, the better.”

“So, I think there’s a lot of education to be done to show examples of what you can achieve by having the type of platform approach that Cloud Foundry brings. If that fails I’ve got a lot of requests for a future whiskey-as-a-service.” —Roger Levy, MariaDB

In the spirit of this holiday meetup/party, his comment led to many raised glasses.

IBM is one of the prime movers of enterprise IT in general and Cloud Foundry in particular through its Bluemix platform, and Alex was able to report some good news: “I think a lot of the developers that we talked to think that Cloud Foundry is cool. A lot of them really like it once they understand what it does for them. I think they really enjoy using it and being productive very quickly.”

He also noted the propensity of many developers to “want to customize everything. They want to dig deep all the way to the hardware if they can and I think that’s great and we need those guys as well and if we have those guys contribute to the core project that’s going to benefit everyone and if they can set that trend then that would be awesome.” 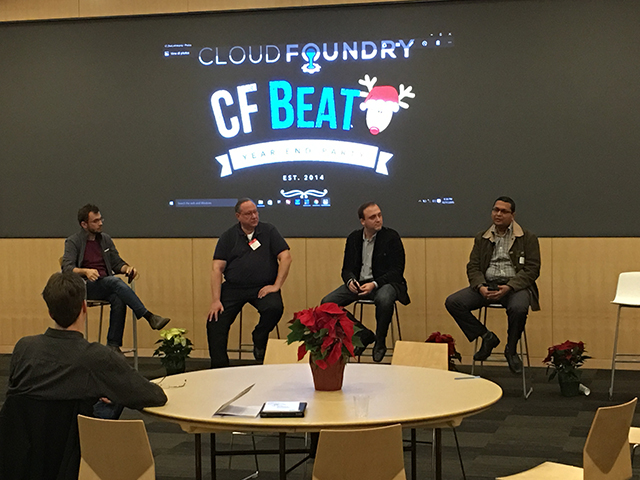 Amplifying on this key point, Sachin noted, “the biggest thing I see is that developers like being in control. With Cloud Foundry, it feels a bit like they’re not. That’s why they love Docker. Docker has given them that control. I think the band between Docker and Cloud Foundry is helping, but if it can get more aligned, it will help.”

Who are our friends?

“In the examples I’ve seen, it’s not the usual suspects,” according to Roger. “It’s been the business units inside the large enterprises. They get the message—you can get things faster, you can get things better.”

“They don’t care how they get IT servers. They care about the results and if they can get it faster and better and not have to get the response of ‘well, you can have it three years from now because it’s not in our IT budget’, they become your biggest allies.”

“They get very excited about the fact that they can be pretty efficient pretty quickly. They don’t have the dependence anymore on somebody going out there and spinning up the database for them. Developers love it. They want to develop code or write something that actually means something. They don’t have to worry about all the underlying construction.” —Alex Rubin, IBM

Sachin pointed out the importance of architects “because Cloud Foundry represents an opportunity for them. Similar to the hybrid cloud, you can move around your payloads to other important locations.” 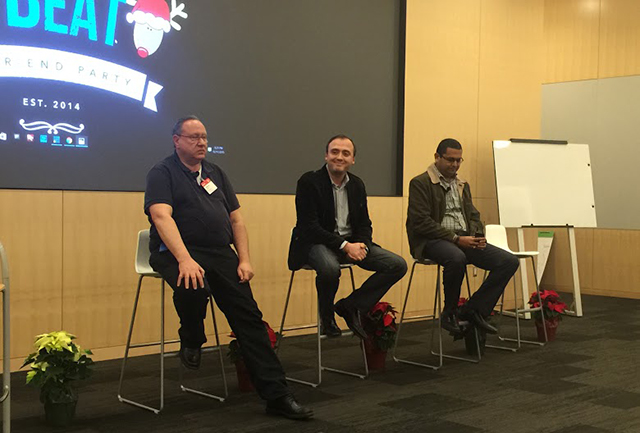 “The biggest challenge with Cloud Foundry in general is that it’s always been top-down. It’s not like Docker that’s bottom-up. For us, we started doing internal stuff just to prove to people that this thing works. Once you prove how good it is, then you take it outside, you can say these are the examples, this is how we’ve done it.” —Sachin Garg, Adobe

Alex said that “from IBM’s standpoint, we have this hybrid cloud vision, so we have multiple deployments. What we see is that customers, when they first come in, they really want to play around. They want to get an understanding of what this is all about, which is of course based on Cloud Foundry.”

“They (also) want to understand the services. They want to understand how all of this will work and how to fit it within the enterprise. In our hackathons (for example) we’ll have a bunch of developers do some projects within the environment and see what they come up with in 24 hours or 48 hours and then do a showcase to see what it really does bring to the enterprise. It’s quite remarkable what folks can do in a pretty short amount of time given that they can easily spin up services and can really get started quickly.”

Roger finished the discussion by adding, “the only thing I’ll add is not what to do—don’t just drop it on top of people. That’s a surefire failure. It really goes back to getting your evangelist, getting your plan, getting your vision. Small wins first and then go from there.”

Cloud Foundry and IoT Concerns: The Need for Standardization and Transaction Authentication
Previous

Bluemix and Sea Change at IBM InterConnect 2016
Next