Why the Cloud Native Buildpacks framework?

When deploying apps to Kubernetes or other container-as-a-service platforms, the proliferation of nonstandard, unauditable containers built manually via Dockerfiles is a real problem. A few products have emerged to solve this problem, among them Cloud Native Buildpacks (СNB). In this blog post, we explore the capabilities of these buildpacks and explain how to use them in build pipelines to deliver standardized, auditable images as artifacts suitable for deployment.

Why adopt a new tool when you are already producing images for your apps? Do your developers hate or aren’t able to write Dockerfiles? Would it thrill your operations team to manage and release a single kind of a deliverable? Does your security team grouse that images are sorely out of date? Buildpacks offer a way to ensure that images of a particular type (JVM, node, etc.) get built the same way, from the same base image, every time, without writing a single Dockerfile. Increasing the level of abstraction in the continuous integration/delivery (CI/CD) process to make a Docker image the basic functional unit makes the process simpler and easier to manage.

At its core, the framework is an additional abstraction on top of Docker images. Just as the introduction of images increased the basic software unit from an app executable to a complete, reusable execution environment, buildpacks up the abstraction from an individually crafted image to a process that creates all the images necessary. This is the same sort of step up in process: the automated generation of many consumables from a few specifications. Later on, we’ll explore an example to understand how everything works.

The challenges of manually creating Dockerfiles

Cloud-first, containerized apps are the new industry standard. Of course, this means images containing apps. Is it worth investing time and money adopting a new process and tool? Very likely. Consider some of the common problems with development teams manually writing Dockerfiles:

The Cloud Native Buildpacks framework addresses all of these by creating a standardized, automatable process. Buildpacks are to images as Helm charts are to deployments. Here are some pros that buildpacks bring to the table:

However, there also comes some level of complexity through:

Getting started with buildpacks is incredibly easy:

That’s it! You should see a new image pushed to your Docker Hub account. If you run it, you’ll have a containerized version of your app ready to go. But what’s actually happening?

Of course, you can create, configure, and publish custom components of all three types. The depth of configuration options means that even a large enterprise with substantial process and standard requirements can leverage buildpacks successfully.

Now, let’s move on to the key features of buildpacks.

Sounds complicated? It can be, given the depth of the framework. However, because Cloud Native Buildpacks represent a high level of abstraction, complexity isn’t a requirement. For those who want an easy, off-the-shelf solution, Paketo maintains a set of buildpacks and builders for public use, covering major ecosystems. As the framework components are themselves images, this means adoption can be as easy as a single extra line of CI code.

The critical question around adopting buildpacks as a process is, who owns it? Meaning, which team is responsible for defining the buildpack components involved and ensuring generation of the final application executes successfully? There are two potential choices: development and operations ownership.

The development team owns building and maintaining app images. This is how many organizations operate today, so the buildpack framework can simply be dropped in as a replacement for Dockerfiles. While doing so represents the least disruptive change, or a good first step, many of the benefits of the buildpack framework are still missing.

Here, we see that the development team still must understand working with images, and manually ensure compliance with standards, such as using the correct stack or builder. 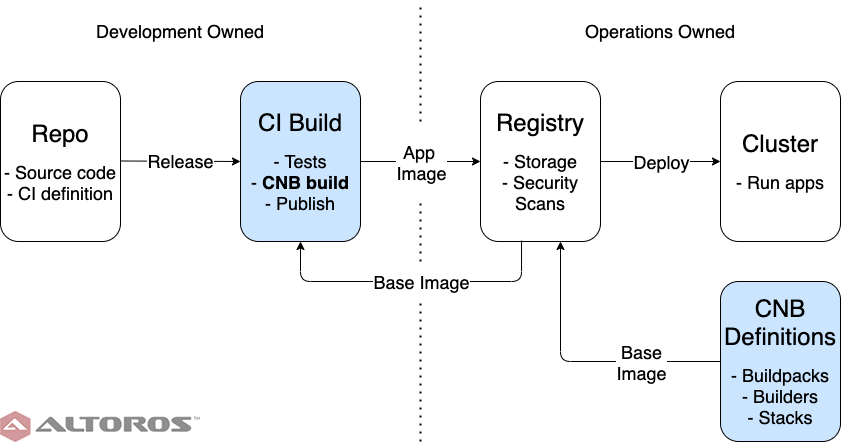 The image-building process owned by the development team

Additionally, because operations is downstream from development, this introduces a cycle in the process. A change in, say, the base image for apps requires running development pipelines even if no source code has changed. Moreover, this will need to be a manual process, as the pipelines have no way of knowing an external dependency needs updating.

Moving the responsibility for constructing images under operations eliminates the dependency cycle from the process. It may seem that development concerns are now leaking into the operations realm, but the ability of the framework to automatically detect and apply the correct buildpacks means that the entire image-building process is application-agnostic. While a new base image will always necessitate rebuilding app images, now this process can be handled entirely by a single team, with no interruption to development. Separating app deliverables from the final images also allows for finer grained security analysis and debugging: if a new vulnerability or bug appears in the image registry, but not the app artifact registry, then it must come from the image-building process. 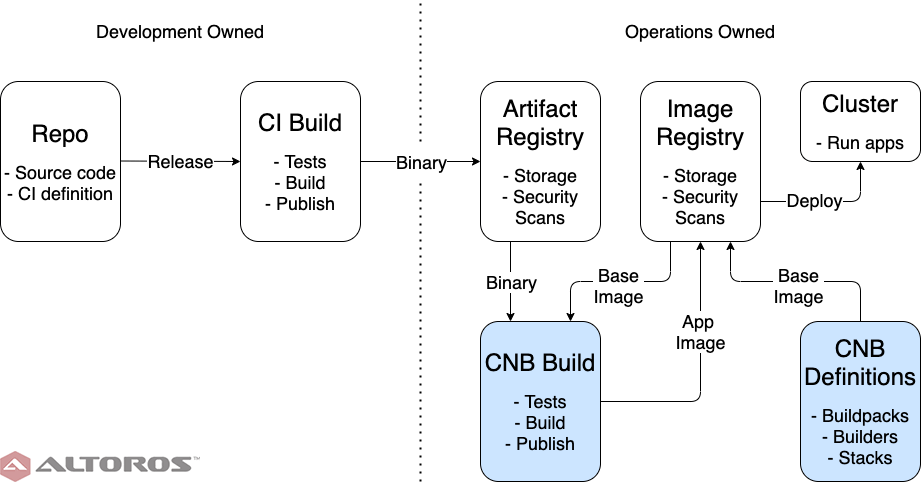 The image-building process owned by the operations team

Try it out! In this GitHub repo, we have a fully functional demo, containing a “Hello, World!” Java API, built by the Spring Boot Guides and using GitHub Actions CI to build and publish an image. Start the repo to trigger the CI pipeline, which publishes to Docker Hub. Start the app with docker run -d -p 8080:8080 altorosdev/cn-buildpacks-example, then GET http://localhost:8080/ to see Greetings from Spring Boot!

The build definition in /.github/workflows/workflow.yml has two workflows designed to represent the two different ownership strategies:

Note that the setup-pack action is officially supported. You can see examples for the same CI processes, but on other infrastructure types in the /ci-examples folder. These run on the official pack Docker image.

There is also a bunch of other examples:

Cloud Native Buildpacks represent a major step forward in modern software development. Adoption for the simple scenarios is easy, and the benefits are immediate. While large organizations will need to put effort into retooling CI/CD processes or writing custom builders, the long-term savings in time and maintenance effort are a compelling value proposition.

This blog post was written by Michael Beaverson, edited by Sophia Turol and Alex Khizhniak.