by Carlo GutierrezOctober 21, 2021
The CF Foundation is shifting from project management committees to working groups to make the community more accessible to new contributors.

After taking a break, Cloud Foundry Community Advisory Board (CAB) meeting has been renewed this October and featured a sidecars demonstration and organizational updates from the Foundation. The call was moderated by Ram Iyengar from the CF Foundation.

Sidecars can be created either through an application manifest or a custom buildpack. Once created, sidecars typically communicate with app processes through a file system, UNIX sockets, or HTTP requests.

During the call, Peter Wagner of DATEV demonstrated how to employ sidecars with HTTP requests. In this manner, sidecar processes become faster, since HTTP requests use localhost. 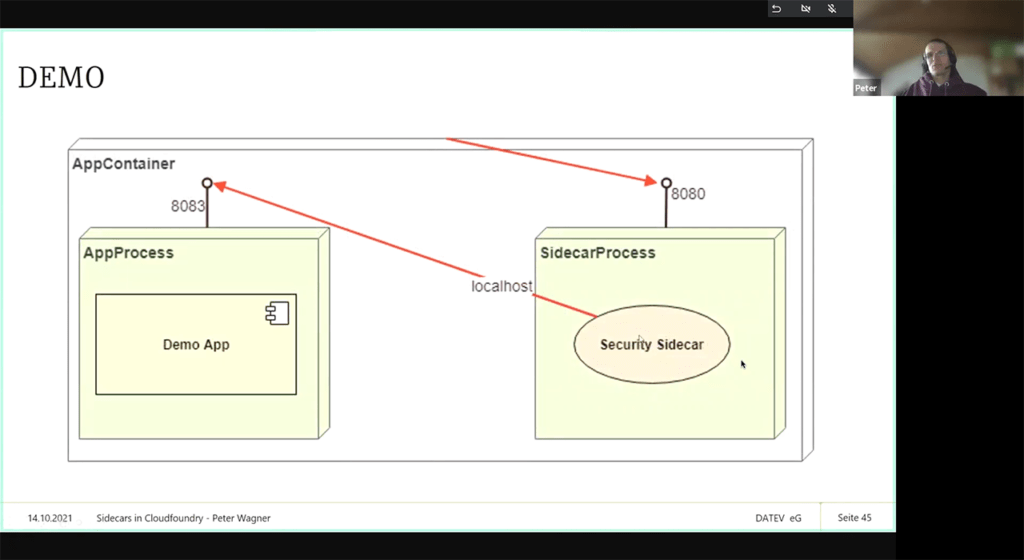 Forwarding requests to the sidecar, which then calls the app process (Image credit)

“These HTTP requests use localhost, so they are faster than requests between Cloud Foundry apps…we’ve done this in our own environment, where we’re hosting Cloud Foundry in a private cloud. Our private cloud will typically take 20–30 milliseconds, when we’re communicating between two apps. With sidecars, it’s about 2–5 milliseconds.” —Peter Wagner, DATEV

With the election of new Technical Oversight Committee (TOC) members last June, the community has been working hard at changing how Cloud Foundry projects are being governed. The Foundation is transitioning from project management committees (PMCs) to a working group model, noted Stephan Merker of SAP. The idea behind the change is to make the projects more accessible to new contributors.

So far, the proposed working groups (subject to change) include:

“Each working group will get a lead. That person will be responsible for running daily business within the working group. Once that is established for all the working groups, the hope is that this new more open and pull request–driven process of collaboration can get into action quicker.”
—Stephan Merker, SAP

Any further updates to governance can be tracked in the community GitHub repo.

The special interest group (SIG) call for Cloud Foundry on Kubernetes is expanding its scope to help with the ongoing effort to combine the two technologies. The meeting will now be focused on a broader set of topics that include anything in that space. “We are retooling the meeting to meet that need,” explained Andrew Wittrock of VMware. “It’s also going to be a place to talk about a newly approved working group that is Cloud Foundy on Kubernetes.”

According to Andrew, the meeting will now include new projects, such as cf-k8s-api and cf-k8s-controller. It will continue to be a biweekly meeting. Anyone interested in contributing can check out the community calendar or join the cf-k8-dev Slack channel.

“It’s going to be a forum for people to bring up concerns, as well as discuss and mold the decisions we’re making. We really want to have people involved, since we’re trying to build products for people to use.” —Andrew Wittrock, VMware

The next CAB call is scheduled on November 18, 2021, at 8 a.m. PDT. Anyone interested can join Cloud Foundry’s CAB Slack channel.

Below, you will find the full recording of this month’s CAB call.

In the video below, Cloud Foundry on Kubernetes Working Group delivers biweekly updates.

This blog post was written by Carlo Gutierrez and edited by Sophia Turol with assistance from Alex Khizhniak.

The Challenges of Building a Remote Patient Monitoring System
Next