by Carlo GutierrezJune 23, 2022
The meeting revealed the architecture for the Korifi project announced recently. Three new Technical Oversight Committee members have been elected.

The Cloud Foundry Community Advisory Board (CAB) meeting in June featured updates on Korifi, a project bridging Kubernetes and the PaaS. The foundation also announced the results of the recently concluded Technical Oversight Committee (TOC) elections. The call was moderated by Ram Iyengar from the CF Foundation.

Back in April 2022, the community released Korifi in yet another attempt to put Cloud Foundry and Kubernetes together. The project entered the beta phase in May with v0.1. During the call, Ram noted that the community has been working hard on documenting the architecture for the incubation.

As of now, Korifi consists of the following core components: 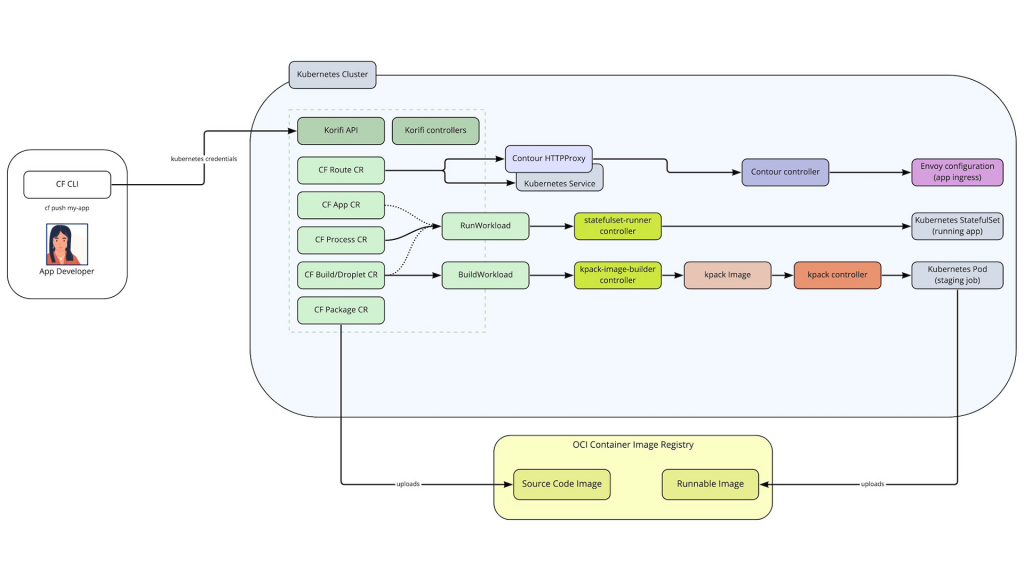 “The core components that make up Korifi are a bunch of Kubernetes resources. The custom resources that we make use of mimic the Cloud-Foundry-for-virtual-machines experience, because they essentially implement the v3 API logic. What has changed is that the interactions can be made directly through kubectl, or it can also happen via the CF CLI.”

Chris Clark from the CF Foundation announced the results of the TOC elections. The three new members are:

The newly elected members will join the TOC alongside Eric Malm of VMware and Stephen Merker of SAP, whose seats will be up for election next year. Chris also went on to thank Lee Porte of GOV.UK, David Stevenson of VMware, and Jan von Löwenstein of SAP for all their work on the TOC since last year.

Chris reiterated that an in-person Cloud Foundry summit will be colocated with KubeCon North America in Huntington Place, Detroit, and will take place either on October 24 or 25. He noted that many of the hotels in the area are almost fully booked, so anyone interested in attending the event should secure their rooms early.

“We should have a confirmation on the date in the next couple of weeks, likely, in the first week of July. We’re looking forward to that. I would recommend checking out hotels sooner rather than later. Since we don’t know yet whether we’re on Monday or Tuesday, it’d be great to get hotels booked as soon as possible.”

The next CAB call is tentatively scheduled for July 20, 2022, at 11 a.m. ET / 8 a.m. PT. Anyone interested in participating can join the CAB Slack channel.