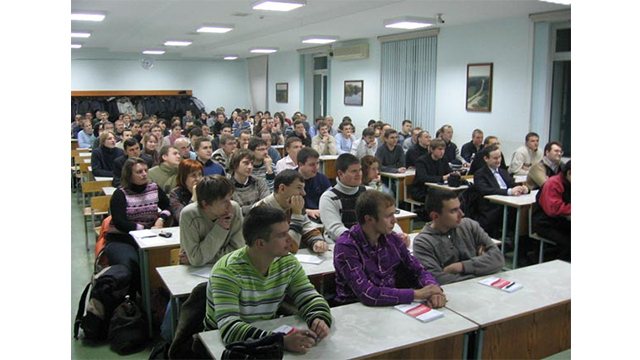 by Alex KhizhniakDecember 18, 2008
The event aimed to unite tech experts to share the latest updates on the Adobe and Java technologies.

On December 18, 2008, a joint meeting of the Belarus Java User Group and the Adobe Flash Platform User Group was held with the support of the Minsk Institute of Management and Altoros. Cornel Creanga, Java Technical Lead at Adobe, presented Adobe Flex in Belarus for the first time and spoke on its integration with Java back ends. In addition, Alexander Zuev, Technology Evangelist at SUN Microsystems, delivered the first review of the new JavaFX development platform for Belarusian developers.

More than 120 IT specialists from Minsk, Homel, and Vitebsk attended the conference, a dozen more followed the live broadcast online.

“I was impressed by the enthusiasm and friendliness of the people in Belarus. I believe that it is one of the things that distinguish the Eastern Europeans from the other European inhabitants. I received a lot of questions regarding Adobe technologies and how they apply to the Java environment. I also had a good conversation about technology and outsourcing with Alexander Zuev, SUN’s new JavaFX Evangelist. I really enjoyed the time I spent in Belarus, and I hope to be back again, not necessarily on behalf of Adobe, but also as a tourist, to enjoy the views of the country.” —Cornel Creanga, Adobe 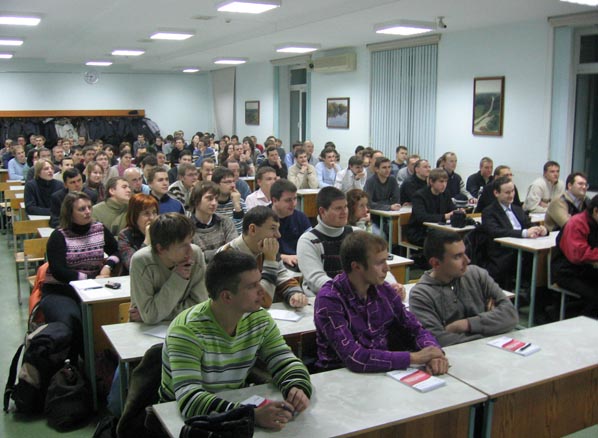 Once the registration was over, the meeting started with Cornel Creanga of Adobe, presenting his review of the key capabilities of the Adobe Flex technology. First, the speaker talked about the programming language itself and the Adobe AIR platform with its high level of interactivity. After that, Cornel demonstrated how to connect Flex with Java back ends, JavaScript, and other web technologies. Cornel also emphasized the importance of open source for Adobe products. After the presentation, Cornel gave out New Year’s gifts from Adobe: shirts with the company’s logo, DVDs, and some O’Reilly books.

During a 15-minute coffee break, the conference attendees would not let Cornel relax as they bombarded him with questions on the differences between Flash, Flex, and other popular RIA technologies. Meanwhile, the rest of the participants chatted over a cup of tea or coffee.

“The format of the conference—speaking together with a representative from Adobe—turned out to be quite exciting. I liked Minsk a lot and was really amazed by the Belarusian students that took part in the conference together with experienced specialists. The level of their general knowledge and education also impressed me. For instance, almost everyone knows that Java is not just the programming language, but also an island in the Indian Ocean. I would love to visit Minsk again. Considering the number of trees in the city, it must be charming in spring!” —Alexander Zuev, Java Technical Evangelist at SUN Microsystems

Alexander Zuev, Technical Evangelist at the Russian branch of SUN Microsystems, presented a detailed review of the JavaFX platform, which was released on December 4, 2008. He explained the differences between JavaFX and Adobe Flex, demonstrated the capabilities of the new language, JavaFX Script, and spoke on the ways it interacts with existing Java programs. Alexander also covered the JavaFX development tools offered by SUN Microsystems, touched upon the company’s future plans, and answered all challenging and tricky questions. The most active participants were rewarded by Alexander with presents featuring SUN’s logo.

“The recent conference that brought together two user groups was unique, because it encompassed two, in a sense, competing technologies. We are glad that our institute could contribute to the constructive discussion of such technically complex and controversial issues.” —Dr. Nikolay Susha, Rector of the Minsk Institute of Management

After the conference finished, Alexander and Cornel along with a dozen other participants continued the discussion in a more casual setting in one of Minsk’s restaurants. The afterparty that started with discussing products and technologies quickly grew into a pleasant banter on cultural differences, secret sides of the speakers’ biographies, Russian winters reaching -50 °C, and vampires from Transylvania.

The Dos and Don’ts of Data Integration
Next