Studies demonstrate that relational databases grow 3x to 5x in size every three years. Enterprises manage a growing number of databases containing more data with increasingly high requirements for uptime and security. In order to maximize return on investment (ROI), companies are challenged to supplement their IT teams and re-balance their development priorities.

The soaring amounts of work are becoming harder and harder for database administrators to deal with, and eventually employing new personnel seems inevitable. The reality is, trying to keep up with the progress by employing more programmers is often not the best solution available.

One possible solution to the problem is remote database administration (DBA). Depending on the scope of work, it can help cut DBA expenses by 40% or more without sacrificing reliability, uptime, or the security of data.

This article will show why remote database administration is financially beneficial and explain how to plan, design, and manage remote DBA initiatives and avoid the most common mistakes.

Providing infrastructure for data storage and management, databases have grown to be a critical component of companies from mom-and-pop shops to Fortune 500 companies.

Most of a DBA’s workday is spent on repetitive, low-level administrative work, whose ROI is fairly low.

Often, small and mid-sized companies underestimate the role of their relational databases until they run into problems.

Safety is not the only concern when it comes to database administration, though. Generally speaking, most of a DBA’s workday is spent on repetitive, low-level administrative work, including such tasks as checking alert logs, monitoring performance logs, tuning, applying patches, performing upgrades, installing agents, validating the backup and recovery process, following change management procedures, and addressing requests from applications developers, O/S administrators, and end users. These tasks are certainly critical to database maintenance, but, ironically, while playing a crucial role in the support of an enterprise’s infrastructure, they do not relate directly to a company’s core revenue-generating competencies. The return on investment of employing internal database administrators, therefore, is fairly low.

Relying on remote DBA is advantageous in both of these aspects. On the one hand, it guarantees your data is safe, since taking care of databases is the direct competence of a remote DBA server provider. This means no unexpected expenditures caused by security issues. On the other hand, remote database administration is beneficial financially, ridding the enterprise of such a considerable, yet cost-ineffective expense as keeping internal DB administrators. Depending on the amount and specific character of work, remote DBA can help cut DBA expenses by 40% or more.

Another huge benefit of remote DBA is round-the-clock database monitoring. 24×7 support is rarely feasible for an enterprise’s in-house staff, both from logistical and cost positions. At the same time, it’s often necessary, particularly for companies that provide a 24-hour interface with customers via the Internet. Remote DBA service providers make this possible.

Before companies can start saving on DBA work, they should run the numbers to realize how much they are spending. Studies show that not many companies can assess the total cost of internal database administration correctly.

Apart from the most obvious expense—salary—there are a number of less obvious, or hidden, costs. Most importantly, these are benefits and pay increases, which contribute to the total cost quite considerably. More than that, taxes should also be taken into account, as well as the office space costs.

Although there has been a consistent trend of hardware and software costs going down, they are still an expense to consider. Personnel costs (such as the above-mentioned salary, benefits, and pay increase costs), by contrast, seem to be continually rising. As their share in the total cost exceeds hardware and software costs, the expenses of an enterprise that employs an internal database administrator are increasing, too.

The structure of internal DBA costs, therefore, looks like this: 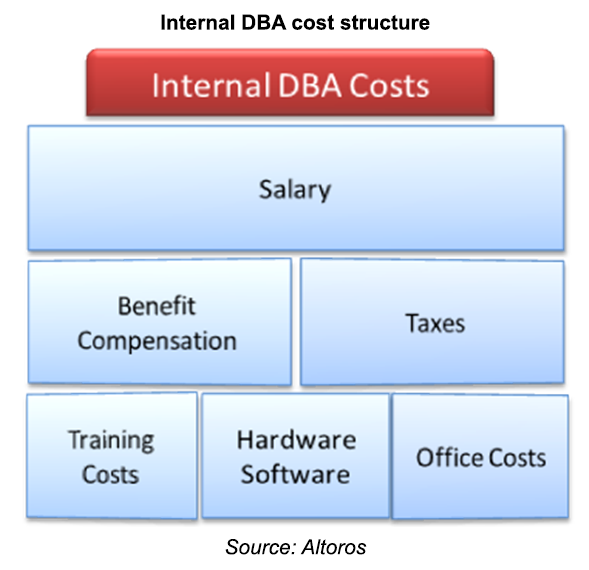 Keeping all these factors in mind can help an enterprise form a more objective view of the total costs of internal DBA.

If a business component does not generate revenue, the ultimate way to improve its ROI is to cut its costs. Let’s see how much, exactly, internal DBA costs, and check whether switching to remote database administration can help an enterprise save substantially.

We will estimate every one of the elements that comprise the total cost of internal DBA:

The total cost of an internal DBA, therefore, comprises about $113,000 a year for one administrator. Typically, one database administrator is employed per every 20 relational databases, so companies that operate a larger number of databases can spend about $226,000 or $339,000—or more on internal DBA.

Remote DBA costs vary depending on the service provider, and complexity and scope of the work. Most service providers charge on average about $65,000–$90,000 annually. Of course, if the number or size of databases is uncommonly big, or if additional features are being implemented, the amount could increase—just as the spending on internal DBA would.

Enterprises can save up to 45% of their spending on DBA by relying on remote administrators instead of one internal employee, and even more if there are two or three internal administrators. 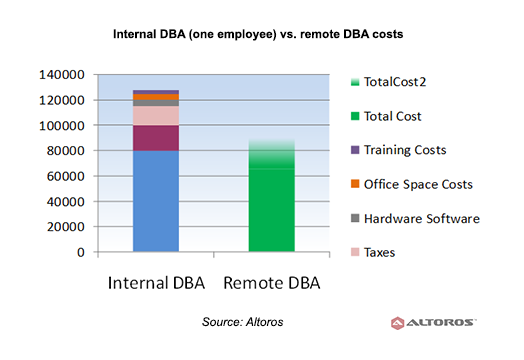 These are the mistakes made by remote DBA service providers.

This is the list of the most common pitfalls of the client enterprise.

Some remote DBA teams propose costs that are half as costly as employing a full-time DBA, but it’s not rare that the lower cost is made up for by poor service.

Benchmarking remote DBA: when and why

When an enterprise decides to switch to remote DBA, it typically expects that doing so will help to save a sizable part of the budget previously allocated for database administration. While generally the financial benefits of remote DBA are beyond doubt, it is a mistake for an enterprise to think that just clinching the deal guarantees savings. Although some remote DBA teams can propose costs that are half as much as employing a full-time database administrator, the true price of these cost savings is generally poor service. Benchmarking is required to provide a baseline of costs and service levels. An enterprise can use it to compare the results delivered with the results within the industry, and consequently negotiate or renegotiate the outsourcing deal.

When negotiating, benchmarking knowledge ensures that adequate expectations are set for cost, performance, and the quality of service. When an enterprise has decided to switch to remote DBA and does not intend to carry out a painstaking investigation—wishing instead to move on through the negotiations quickly—benchmarking data can be used as a guide.

Once a deal has been settled, benchmarking can be used for contract refinement. Most outsourcing contracts are renegotiated within two years of being signed. The main reasons for renegotiation are typically dissatisfaction with cost or service quality. Referring to benchmarking data is the main way to make a case with the remote DBA team when renegotiating the contract.

This is why it makes sense that the requirement for benchmarking be included in the final terms of a remote DBA contract. In this case, one can expect that realistic expectations help to bring about a positive outcome.

The article was written by Michael Fedotov, Alex Khizhniak, and Renat Khasanshyn.