by Roger Strukhoff, Carlo Gutierrez, Alex Khizhniak, and Sophia TurolOctober 25, 2016
An engineering team at San Francisco State University developed an automated, smart watering meter that not only made a big difference on campus, but may have implications for all of California and the rest of the world.

Water in California is a major issue that affects almost 40 million residents of the state in a two-season (wet-dry) climate that experiences periodic sustained droughts.

Back in January 17, 2014, the California State Governor, Jerry Brown, declared state of emergency due to severe droughts. In May 9, 2016, Jerry Brown gave an executive order to continue saving water to offset effects of persistent droughts. The drought report from the California Water Science Center provides more details.

At the recent Predix meetup, Abhilash Shrivastava, Graduate Research Assistant at San Francisco State University, discussed this problem, outlining how IoT solutions can cope with droughts—which is applicable to many other parts of the world.

“About 40% of the San Francisco State University campus is covered by lawns demanding a significant use of water for irrigating them,” said Abhilash. 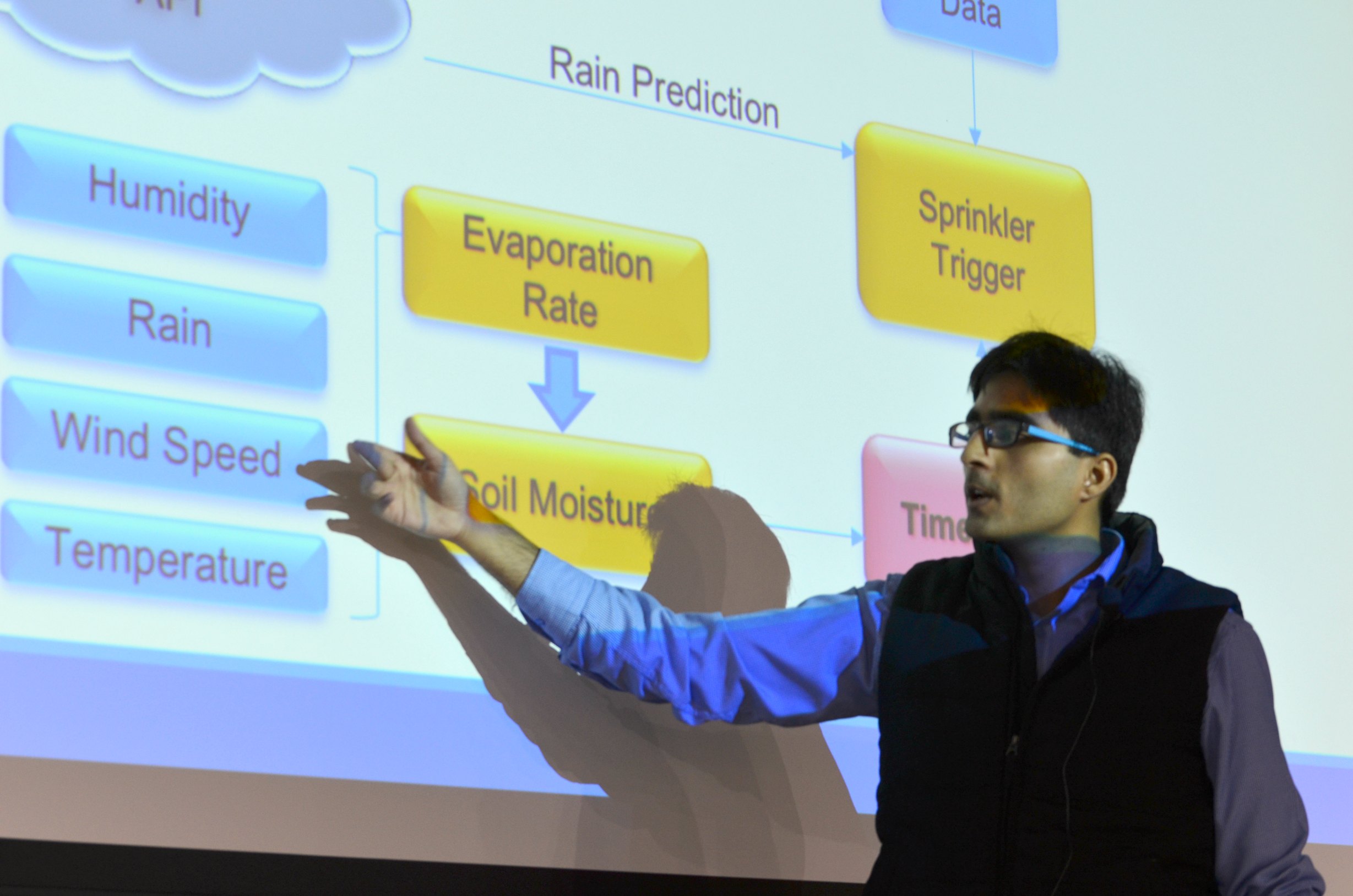 “There was no intelligent automation for the sprinklers on various grounds, and no soil-moisture measurement or calculation. This means there was a lot of manual work.”
—Abhilash Shrivastava, San Francisco State University

At the same time, the university looks at meeting California’s 25% mandatory water conservation regulation. Within this initiative, a drought action plan was introduced at the campus, including some software engineering efforts.

One of the solutions developed within the San Francisco State University aims at preventing plant and soil destruction and optimizing water usage by estimating soil moisture and collecting weather data. Though a relatively small-scale project, it may have implications for the state of California as a whole and for the world.

How Predix comes to bear on the problem

The system is driven by GE’s Predix platform—along with AngularJS, Polymer, nginx, and Grunt. Abhilash said several Predix services were used to construct this project, including UAA, Time Series, asset management, view service, and Logstash capabilities, as well as the analytics catalog service. 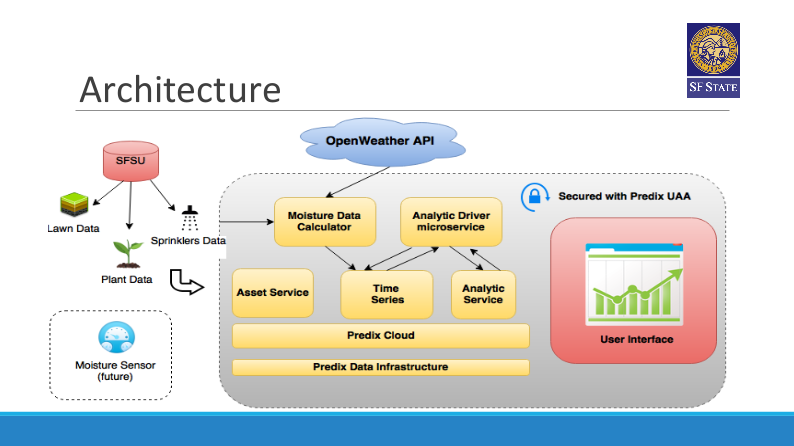 The Predix platform introduced numerous possibilities for the engineering team:

From a high-level view, the systems tracks weather data from the OpenWeather API (humidity, temperature, etc.), analyzes it, and generates appropriate triggers/actions. 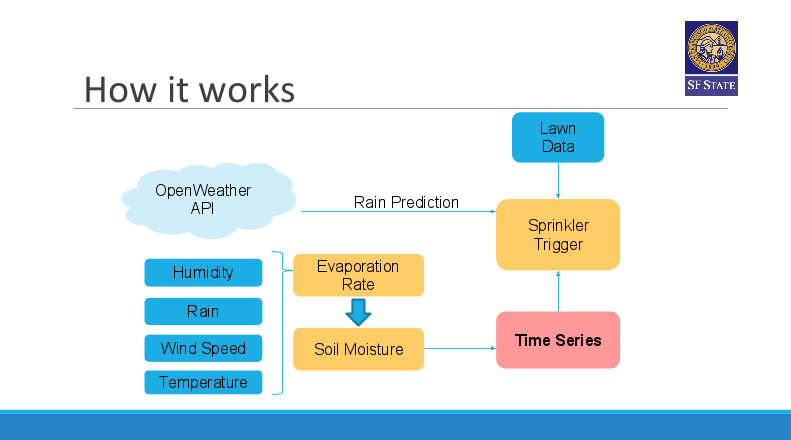 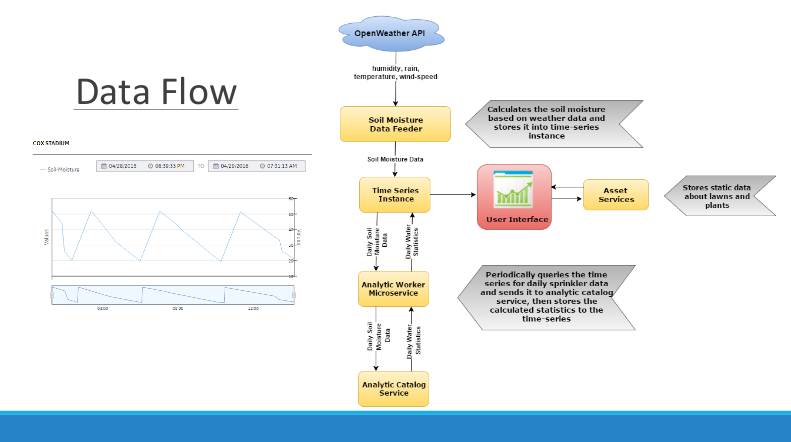 He said the project was “cost-effective, reducing water bills; maximized the soil’s absorption rate, resulting in less money spent on lawn maintenance; and was environment-friendly with less manual intervention.” Abhilash estimates annual savings for the campus between 1.6 million and 2.3 million gallons of water, as well as reduced expenses by US$25,000 (excluding labor). 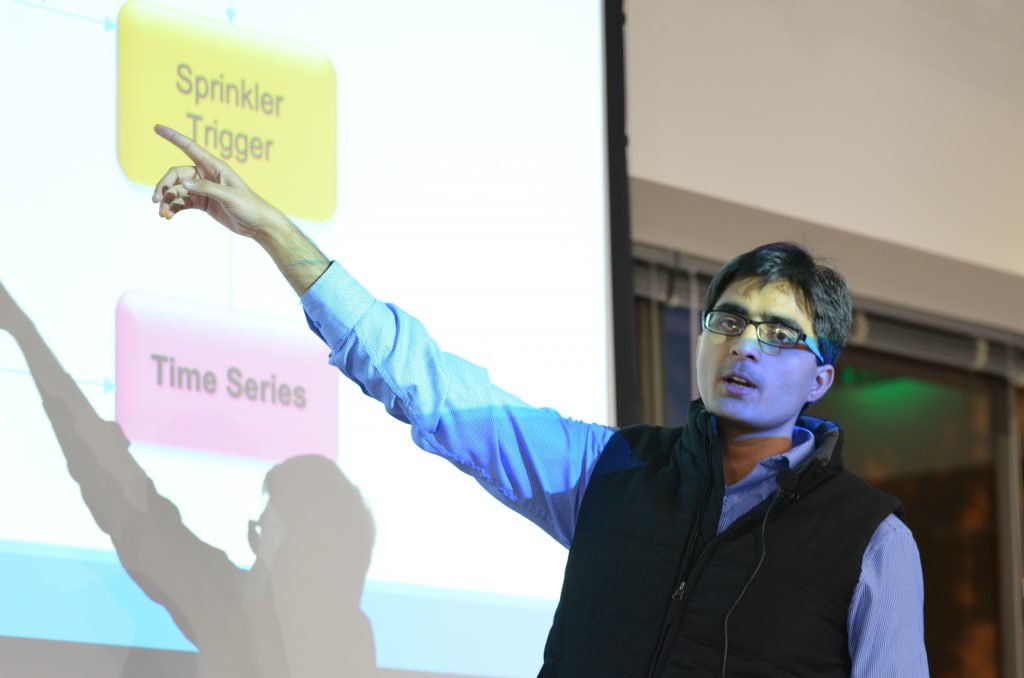 “The project has been successful in gaining connectivity and automating the sprinkler system, creating a dashboard with analytics on water usage, determining how much water was needed for the soil and monitoring water usage.” —Abhilash Shrivastava, San Francisco State University

What’s the future of the project?

This smart watering system will evolve further. As might be expected, Abhilash would like to develop a mobile app “to control the sprinklers remotely,” continue to enhance the analytics, and create an anomaly-detection system for damaged sprinklers.

Water issues are among the most important throughout the world. Wars are fought over water, people die because of a lack of it, and growing populations in and near deserts will continue to demand more of it. This project is a great example of what can be done with Cloud Foundry and Predix to attack a clearcut problem.

These are the slides presented by Abhilash Shrivastava. 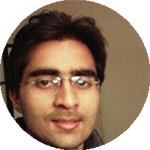 Abhilash Shrivastava is a Graduate Research Assistant at San Francisco State University. He also serves as a Special Assistant for Data and IT at the Campus Academic Resource Program. At a recent Predix hackathon, his team got the third place in the overall category and also grabbed the categorial prize for the “Most Effective Use of Predix Services.” Apart from working as a Predix developer, Abhilash has 5+ years of web development experience under his belt.
This post is written by Roger Strukhoff, Carlo Gutierrez, Alex Khizhniak, and Sophie Turol.

All the World’s a Hybrid Cloud—Or Is It?
Next

The Good, the Bad, and the Ugly Use of IoT: Who Owns the Data?
CATEGORIES