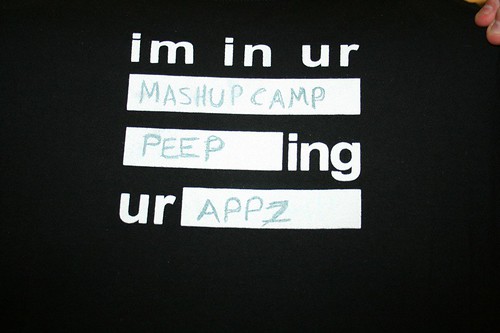 by Renat KhasanshynJuly 21, 2007
These are the notes from a great event I've attended this week, as well as some of the results from the IBM Business Mashup Challenge we participated in.

Several vendors who sponsored the event presented their mashup development tools. I’ve seen Zude product, announced in April with the help of ZDNet’s David Berlind. Nice UI, Dapper and OpenKapow did demos too. Google Gears appears to be a great enabler of developing applications that work both online and off-line.


John Herren, whom I met first at Mashup Camp 3 at MIT in Boston, MA this January, presented Introduction to Mashup Development. The LignUp demo was cool, too.

4 pm. People from IDG called about the upcoming LinuxWorld trade show where Apatar will exhibit, and I had to change the booth delivery logistics and missed the rest of the demos:(

6 pm. On Tuesday night there was a pool party sponsored by StrikeIron. Over wine Mark Madsen and I developed a concept of the mashup “Cold Call Assist!”. The idea is to improve performance of sales folks working with Salesforce.com by gathering and displaying recent news about the prospective customer company and their competitors, and provides a list of restaurants near the prospect’s location along with a map for directions, making it easy to suggest meeting for lunch or dinner in an area close to the prospect. Next day we began working on creating this mashup using IBM QEDWiki and after several hours of work we got the mashup working. Overview of mashup is available at IBM QEDWiki page here with lessons learned documented and demo of the actual mashup application here.

On Wednesday, I moderated a session called 5 Ways to Monetize Your Mashup Development Skills. (Here’s an article on the topic.) It was a nice discussion, together the participants brainstormed the possible options for mashup-driven business models, discussed ideas how fellow masher-uppers could leverage existing opportunities to make money and start new companies. Speed geeking was cool, I demonstrated how an RSS feed at ApatarForge.Org

Wednesday night working with Mark on implementation of our mashup. Late, very late. I don’t know when Mark finished, but he was still working when I left at 1 am for a conference call with my team in Belarus.

10 am. Got an email from Mark which he sent at 5 am! He will be late. I’m submitting our mashup for the contest.

10:30 am. I decided to develop one more mashup using IBM QED Wiki and StrikeIron SMS widget. The idea is to enable any Salesforce.com user send SMS messages to any of the contacts in Salesforce.com.

1 pm. The Salesforce.com-StrikeIron-QEDWiki-SMS mashup is ready. Very hungry. Lunch is good, even better than on Wednesday:). 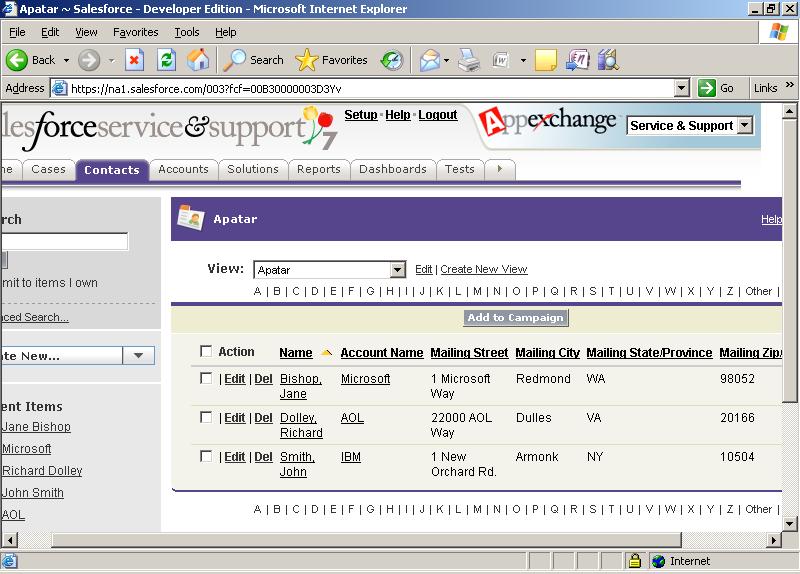 3 pm. I moderated a session called “Apatar Enteprise Data Mashups: Mix information between MS Excel, RSS, MySQL, MS SQL, Flickr, Amazon S3, and Salesforce.com without writing a single line of code.” Attendees were very active and asked lots of questions. Bill Graham of CNET Networks requested a capability for Apatar to process large quantities of data by threads, with the goal to speed up processing of ETL transformations.

4 pm. WOA! The mashup which Mark and I developed was named the Best of Conference Business Mashup. Now we have to split the main cash prize of $1,500.00 sponsored by IBM, Dapper, Kapow, and StrikeIron. Mark and I, now the happiest mashup campers in the world, decided to sponsor the first round of beer for the attendees of the Camp at a bar nearby. David Berlind announced the Mashup Camp 4 officially closed.

6 pm. Masher-uppers are having a party at the bar called Tide House in Mountain View. A friend of mine who lives nearby Andrew Filev, CEO of Wrike.com, joined the party which was filled with geeky discussions about the future of mashups.


Photos from MashupCamp4 are available at Liz’s photo stream .

There are the slides from John Herren’s “Introduction to Mashups” session presented at the Mashup University.

Will Mashups Push Web 2.0 into the Enterprise Arena?
Next