Installing Kubernetes with Kubespray on AWS

Kubespray is a composition of Ansible playbooks aimed at providing users with a flexible method of deploying a production-grade Kubernetes cluster. However, deploying Kubernetes with Kubespray can get tricky if you are not too familiar with the technology.

In this tutorial, we will show how to deploy Kubernetes with Kubespray on AWS.

Before deploying, we will need a virtual machine (hereinafter Jumpbox) with all the software dependencies installed. Check the list of distributions supported by Kubespray and deploy the Jumpbox with one of these distributions. Make sure to have the latest version of Python installed. Next, the dependencies from requirements.text in Kubespray’s GitHub repo must be installed.

Lastly, install Terraform by HashiCorp. Simply download the latest version of Terraform according to your distribution and install it to your /usr/local/bin folder. For example:

Building a cloud infrastructure with Terraform

Since Kubespray does not automatically create virtual machines, we need to use Terraform to help provision our infrastructure. To start, we create an SSH key pair for Ansible on AWS. 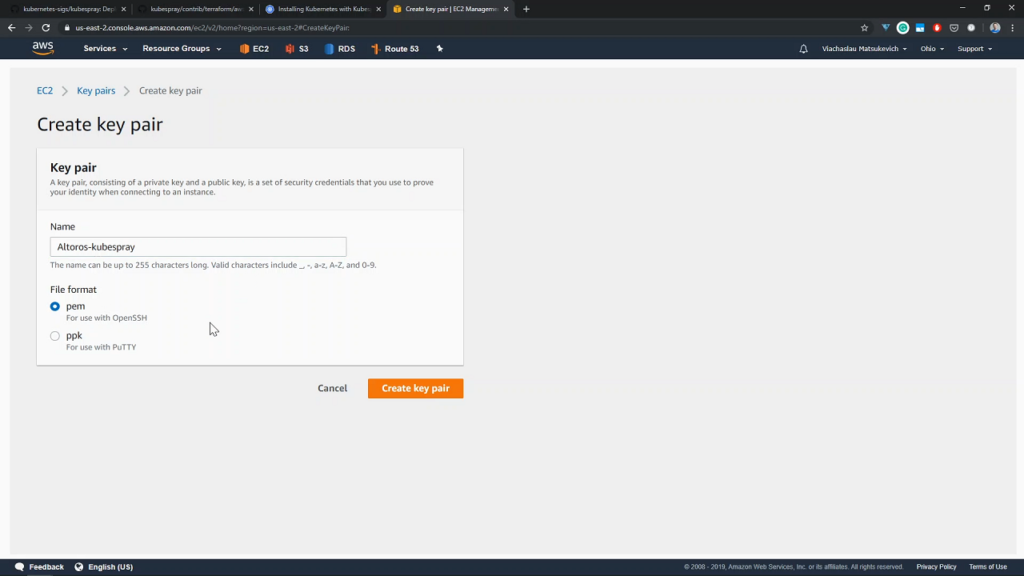 An example of a key pair being created

The next step is to clone the Kubespray repository into our jumpbox.

We then enter the cloned directory and copy the credentials.

In this case, the AWS credentials were as follows.

Next, we edit terraform.tfvars in order to customize our infrastructure.

Below is an example configuration.

Next, initialize Terraform and run terraform plan to see any changes required for the infrastructure.

After, apply the plan that was just created. This begins deploying the infrastructure and may take a few minutes.

Once deployed, we can check out the infrastructure in our AWS dashboard. 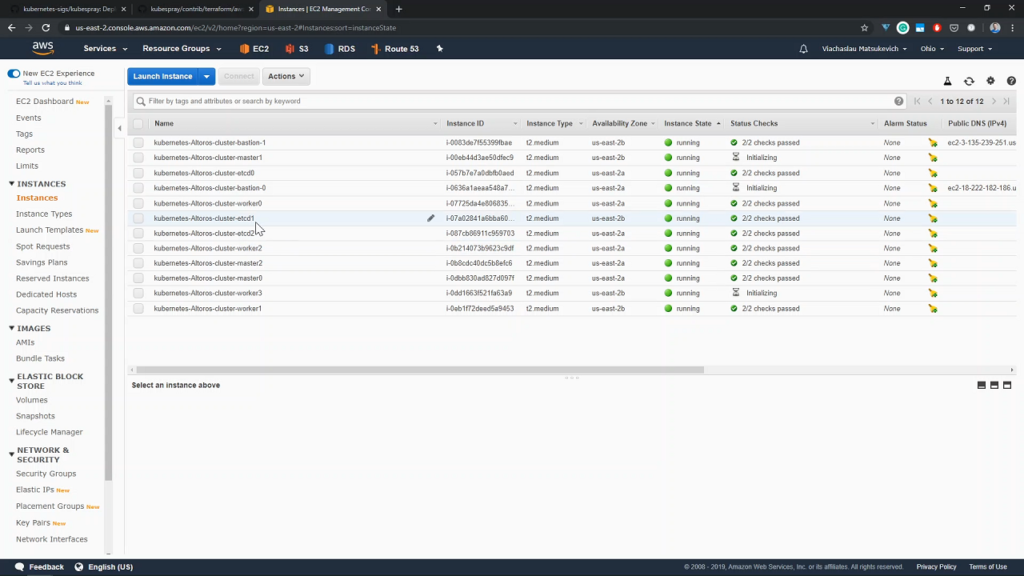 Deploying a cluster with Kubespray

With the infrastructure provisioned, we can begin to deploy a Kubernetes cluster using Ansible. Start off by entering the Kubespray directory and use the Ansible inventory file created by Terraform.

Next, load the SSH keys, which were created in AWS earlier on. First, create a file (in our case, it will be located at ~/.ssh/Altoros/kubespray.pem) and paste the private part of the key created at AWS there.

Once the SSH keys are loaded, we can now deploy a cluster using Ansible playbooks. This takes roughly 20 minutes.

Now that the cluster has been deployed, we can configure who has access to it. First, find the IP address of the first master.

After identifying the IP address, we can SSH to the first master.

Once connected, we are set as a core user. Switch to the root user and copy the kubectl config located in the root home folder.

Highlight and copy the kubectl config as shown in the following image. 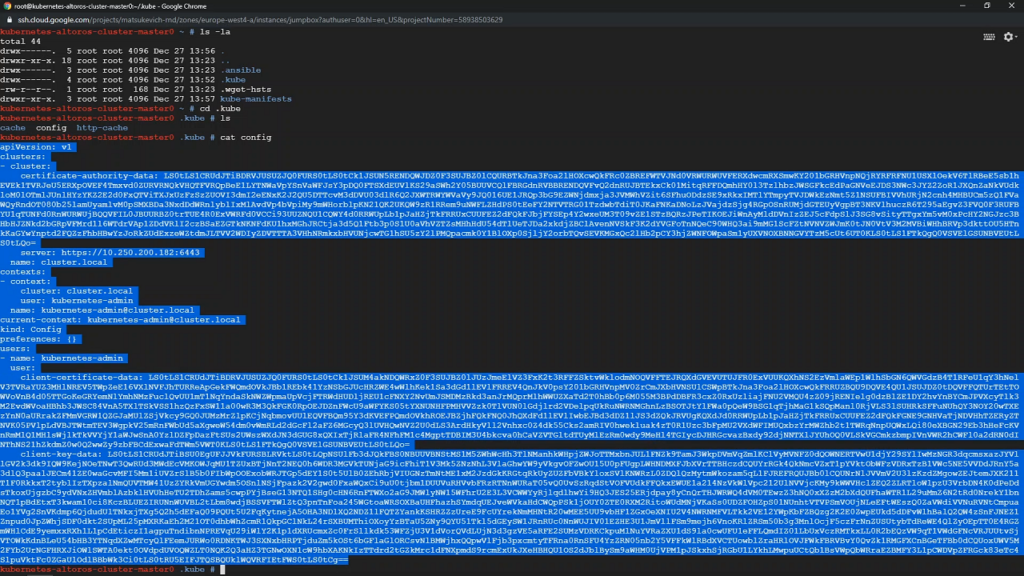 Return to the jumpbox and go to kube/config. 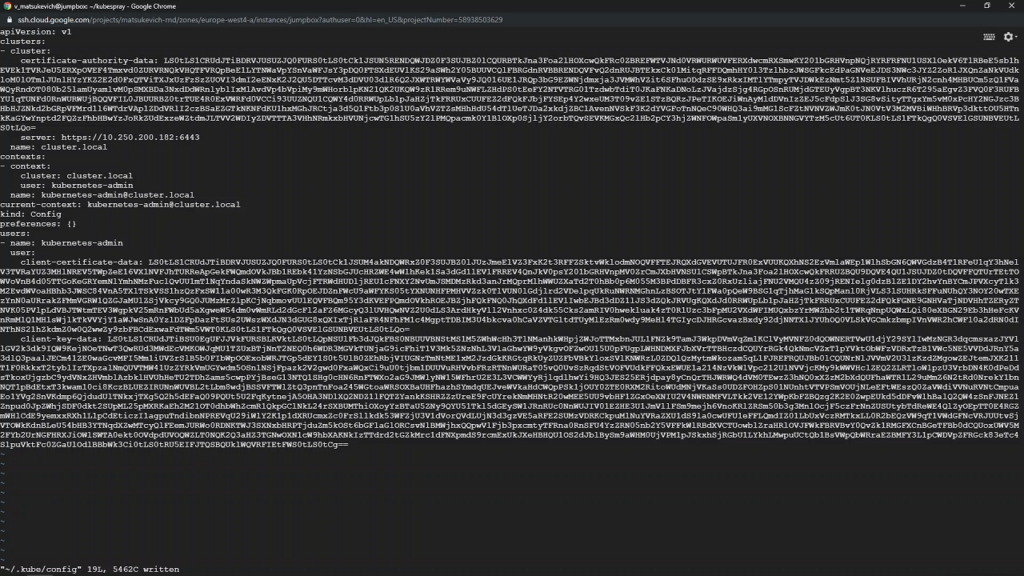 Next, copy the URL of the load balancer from the inventory file. In our case, the URL is kubernetes-elb-altoros-cluster-458236357.us-east-2.elb-amazonaws.com. Paste this URL into the server parameter in kubectl config. Do not overwrite the port.

After configuring access to the cluster, we can check on our cluster.

Node and cluster details will be shown in the console. 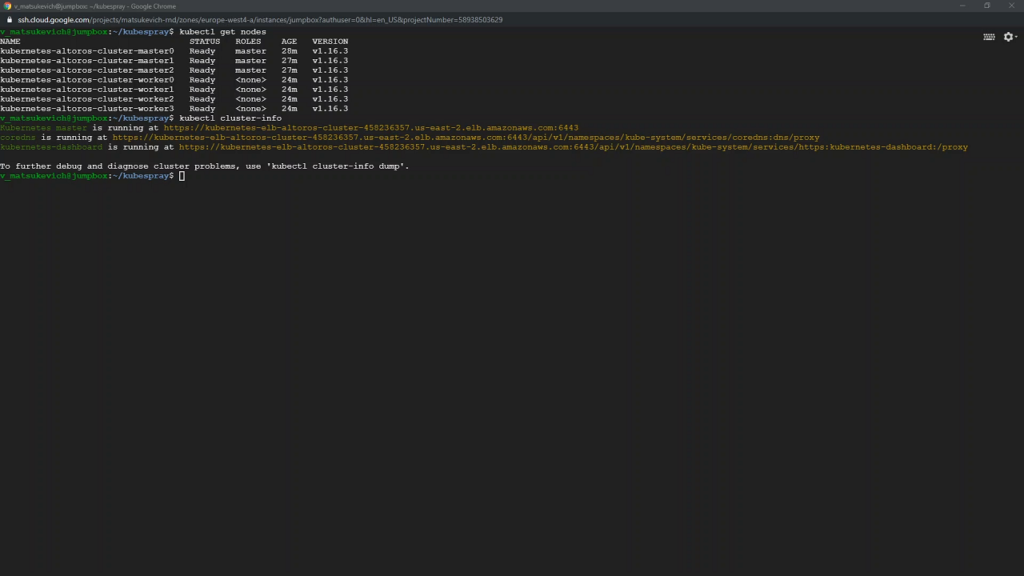 With the cluster ready, we can run a test deployment.

Entering this commands should deploy NGINX and also return the status of the pods and deployments. 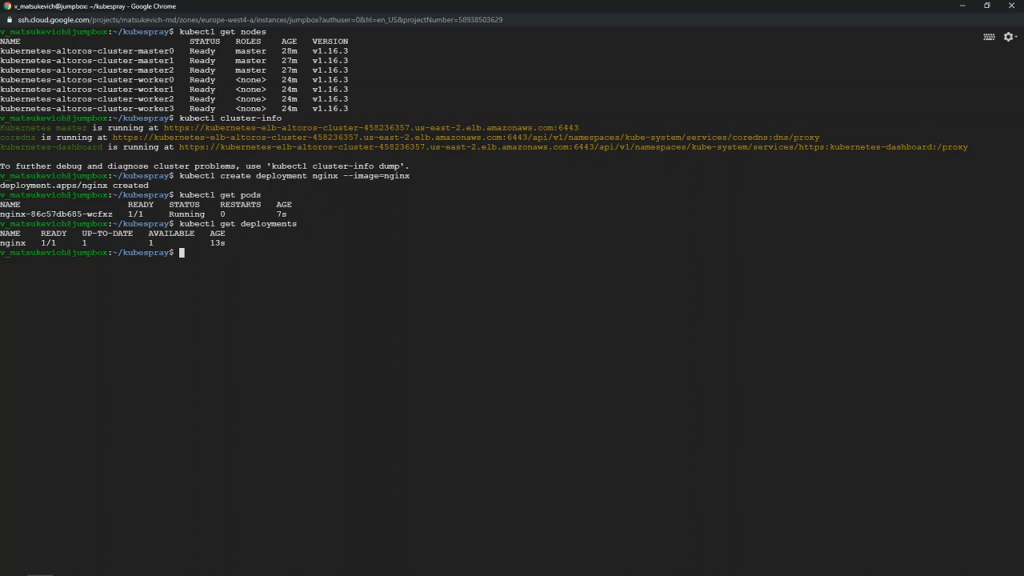 With this, we have successfully provisioned our cloud infrastructure with Terraform. We then deployed a Kubernetes cluster using Kubespray. We also configured access to the cluster and were finally able to run test deployments.

More on Kubespray can be found in its GitHub repository, as well as in the project’s official documentation.

The video demonstrates how to deploy Kubernetes clusters on AWS using Kubespray.

Arsenii Petrovich is Cloud Solutions Architect at Altoros specializing in system administration, DevOps, and automation. He has profound knowledge of multiple scripting and programming languages and the ability to use them within a single project. Arsenii is also experienced in maintaining different IaaS platforms—including AWS, OpenStack, vSphere, and GCP.