by Roger StrukhoffSeptember 29, 2016
A new certification was announced, containers and microservices were (not surprisingly) discussed, and it seems clear that a mad scramble is about to break out for significant new cloud business.

Dear Software People,
No, it is just consuming hardware resources.
—All the best, Hardware People.

Similar pithy notes could be written between Dev and Ops and between Public and Private Cloud proponents.

As Cloud Foundry Summit Europe 2016 finished, with a strong focus on multi-cloud and an echo from back in the US of Oracle claiming it will take on AWS and the world, it has now become clear that all previous cloud and Cloud Foundry history was mere prelude.

Trillions of dollars at stake

With perhaps 90% of global enterprise workloads still to be deployed to a cloud of any fashion, the coming years should offer contests to win business among technology providers large and small in an environment far more competitive than any previous one throughout the history of information technology.

The world enterprise IT budget exceeds US$3 trillion annually (including telco), with its planners facing the challenge of data growth doubling every 2.7 years, edge devices increasing complexity vastly, yet processing efficiencies increasing rapidly, as well. Transfer more and more of those workloads into the cloud, and deploy more and more new workloads into the cloud and one can see how a relatively slow growth in IT budgeting will nevertheless result in astounding new productivity.

Not only F50 enterprises, but also governments are already in the game. 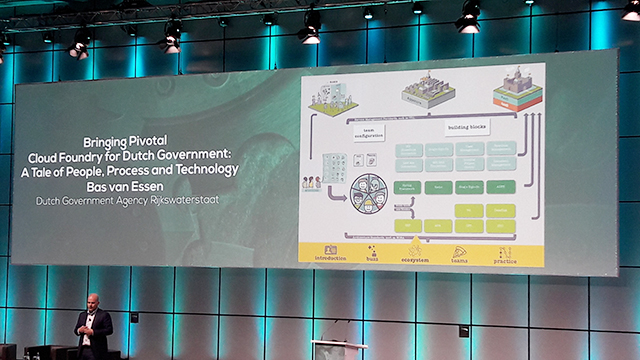 There’s a mad scramble to win customers, with a very healthy Cloud Foundry ecosystem trying to cooperate and compete with all the other alternatives. Within this context, Cloud Foundry Certified offerings grew by one, with Atos announcing certification of its Atos Cloud Foundry offering. It joins several others in this year’s lineup. All offerings must be re-certified every year.

The early days of IT were dominated by IBM and the PC era by Microsoft. Today, a demand for multi-cloud approaches by customers guarantees by definition that no single vendor can dominate. So, both of the above companies are serious cloud players, but must contend with companies such as HPE and Cisco on the one hand, SAP and now Oracle on the other, while continually worrying about getting hit in the face by Amazon and perhaps Google. 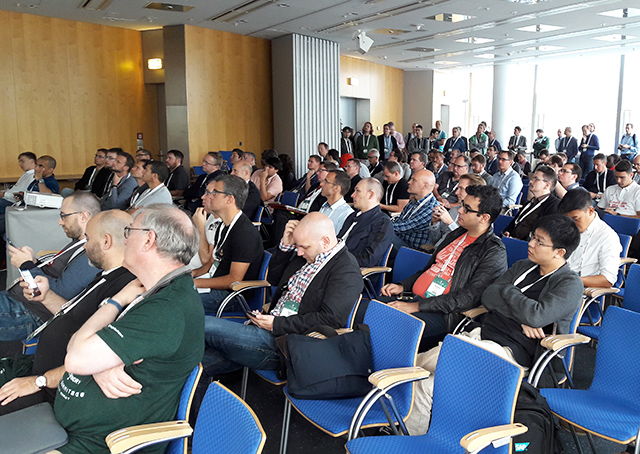 Thus, events ostensibly devoted to software, such as the Cloud Foundry summits, end up featuring many discussions of hardware, of a DevOps approach in managing things “above the rack and below the stack” (in the words of DCD’s George Rockett and Dan Scarbrough), and evolving outlines of the endless variations of hybrid clouds and multi-clouds. Soon enough, cloud deployments may be seen as analogous to the Ruy Lopez and Sicilian Defense, etc.

The summit’s ketynotes and technical sessions provided a good idea of the diversity and complexity of the task at hand for the Cloud Foundry community, whether developing the product and its services, or employing it.

SAP‘s Marc Geall tackled digital transformation and the importance of being part of the community. 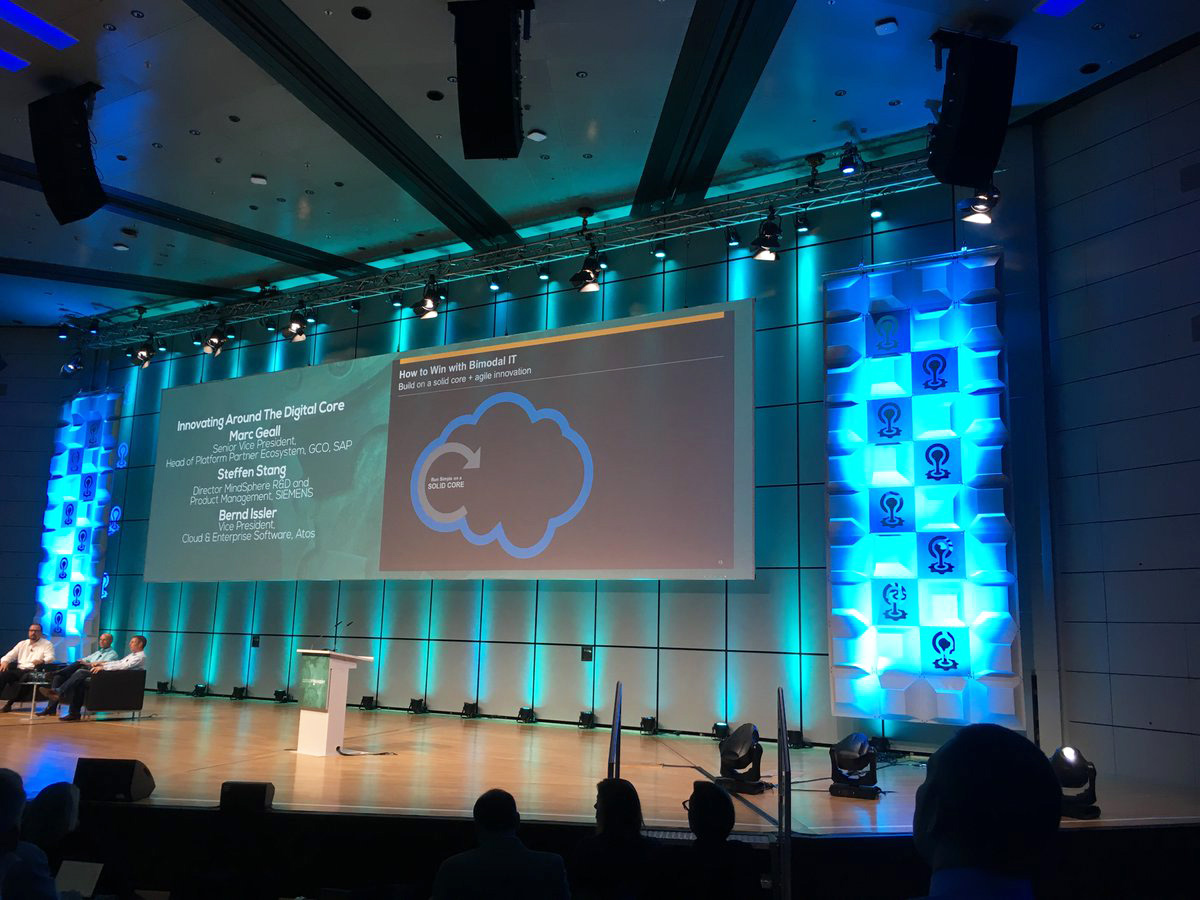 “The pace of industry is changing too quickly that one vendor can’t do this on their own. They need to leverage the power and diversity of the ecosystem.” —Marc Geall, SAP

Ursula Morgenstern of Atos championed not only the idea of cloud diversity, but also gender, ethnic, and workforce diversity. She emphasized how the “top quartile of ethnic diverse companies are outperforming their peers by 35%.” 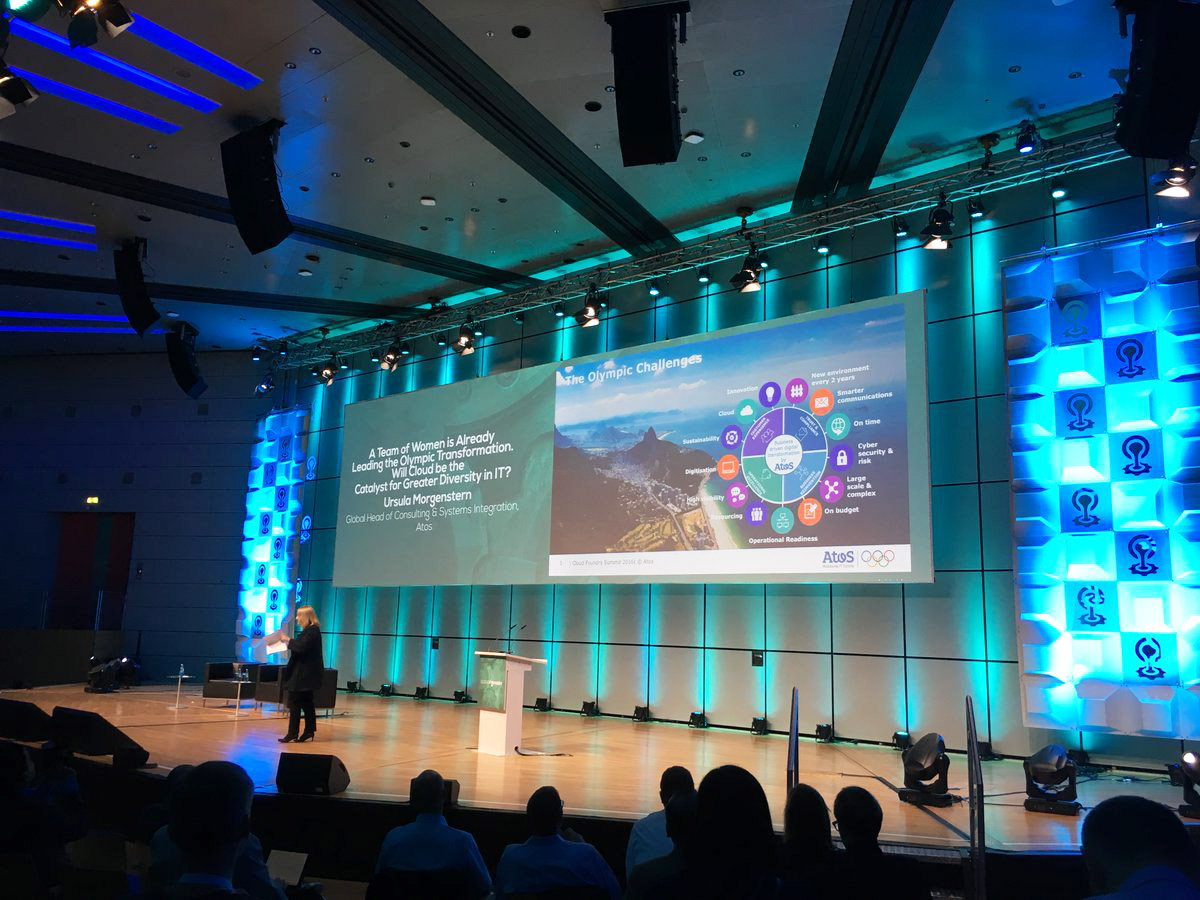 “Diversity matters from a business perspective. A diverse workforce should give every company a competitive advantage, should give you better access to diverse global consumer base.”
—Ursula Morgenstern, Atos

The Dutch government is working with Mendix to build smart apps on Pivotal Cloud Foundry. 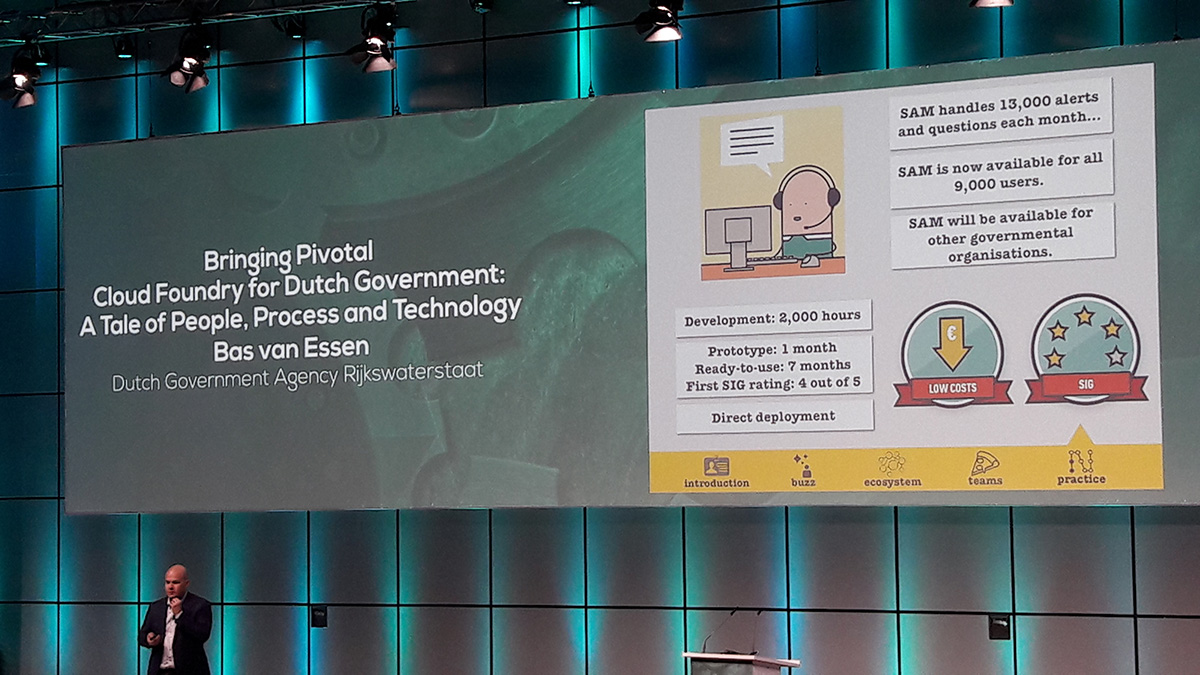 “With Cloud Foundry, we can save money and allocate personnel and resources better.”
—Bas van Essen, Dutch Government

Volkswagen was in the house to discuss the early stages of transforming its software development goals and processes by building upon the Cloud Foundry platform.

Keynotes were followed by lightning talks. Andrei Yurkevich, CTO at Altoros, shared his ideas on what skills a perfect Cloud Foundry engineer should have under one’s belt. Read our detailed recap of his session. 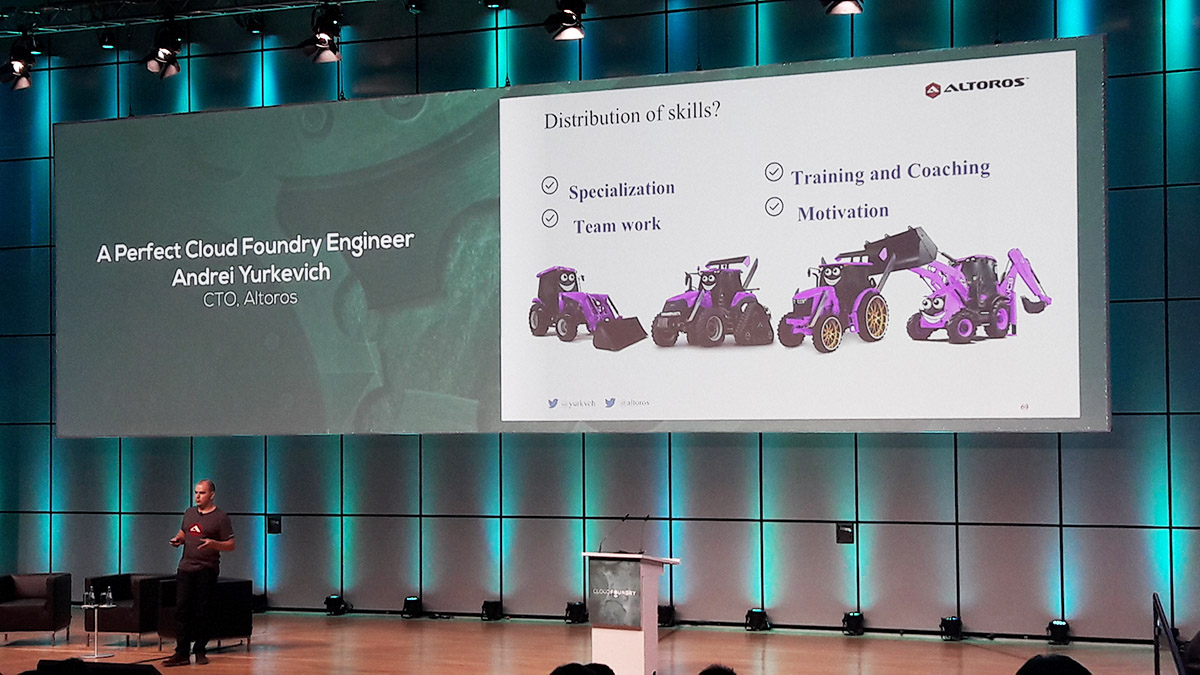 “We’re getting a universal soldier—a man with many, many hats.”
—Andrei Yurkevich, Altoros

Michael Englert of AppDynamics stressed the importance of monitoring app performance in a multi-cloud environment.

“We want to give you the possibility to tag and trace all transactions through your all application stack across different technologies without changing your code.”
—Michael Englert, AppDynamics

An interesting topic of conversation at the Summit was that of comparing Docker to Cloud Foundry. Pivotal’s Alexandre Vasseur provided three container use cases that showed:

Alexandre demonstrated how to use Cloud Foundry to take advantage of a huge Docker registry. In the final analysis, he noted, “everything is about apps, services and velocity.”

Altoros Cloud Foundry engineers, Maksim Zhylinski examined Cloud Foundry containers and provided his thoughts on Garden—a new container management system in Cloud Foundry/Diego. Read his recent blog post for details on the difference between Garden, Warden, and Docker. He elaborated on Garden’s file system and showed a real-time demo of how to debug containers. 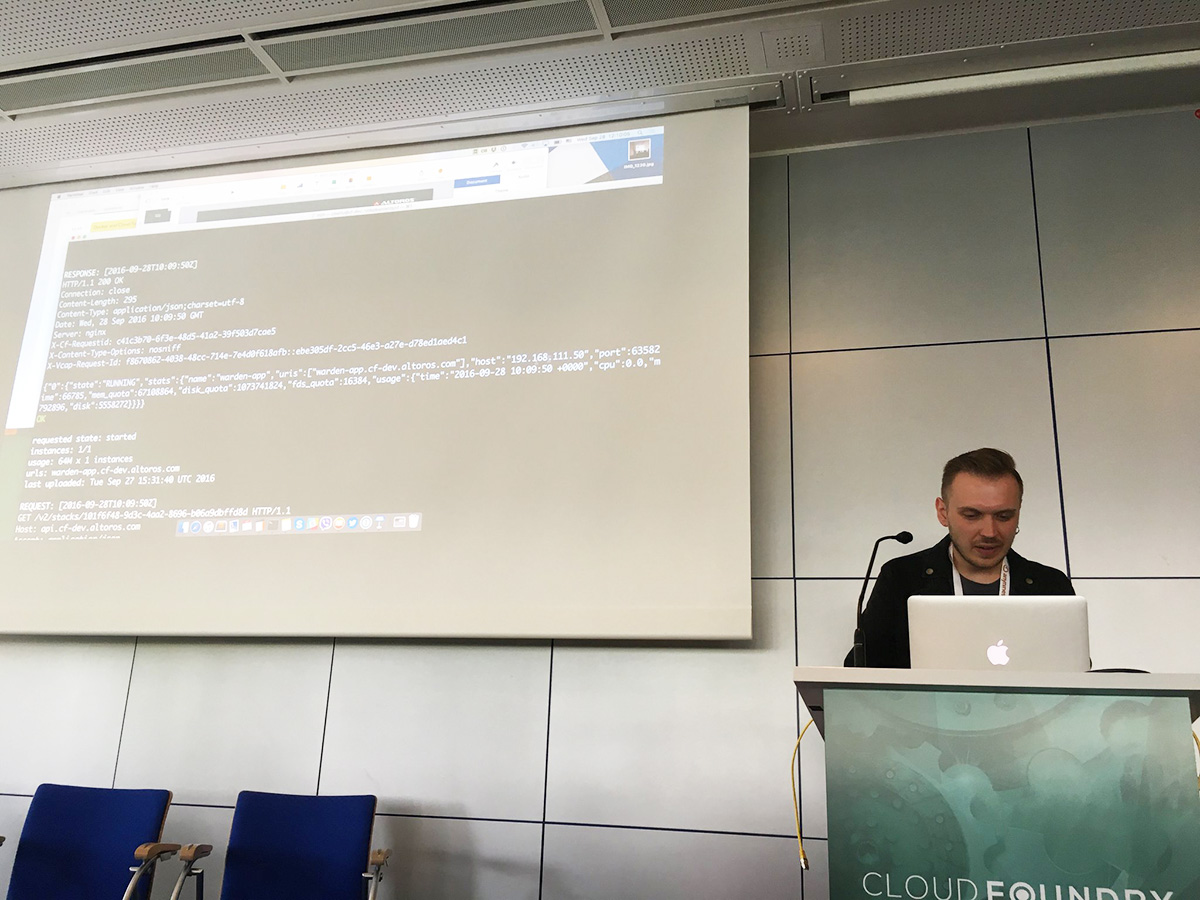 There were other brilliant sessions on containers, as well, of course.

A lot was said about microservices, they were prominent during the summit, too. For instance, Charles Nicholls of SAP explained how millenials behavior changes the way companies build e-commerce software. Fun fact, at least 50% of these young people had done a commercial transaction while in the restroom.

One way of improving engagement with them is taking advantage of microservices. Using the same strategy that software engineers take to build complex softwares based on smaller pieces, e-commerce can “plug” itself everywhere. From cars to domestic appliances, from electronic commerce sites to shopping malls.

Charles presented SAP’s YAAS.io service, which is helping companies to build that “microservices” e-commerce strategy with a series of ready-to-use services that one can easily plug in and start using right away—from personalized home pages to payment platforms.

During the summit, many sessions focused on IoT and Industrial Internet. Bosch Software Innovations, as we reported on Tuesday, is building an opend IoT platform with Cloud Foundry and the Eclipse IoT technology.

dorma+kaba was also in the mix to share their success story. The company put everything on Cloud Foundry, including their IoT stack. With Cloud Foundry, their customers had immediate access to the platform, which permitted real-time monitoring and modification of security access and privileges. 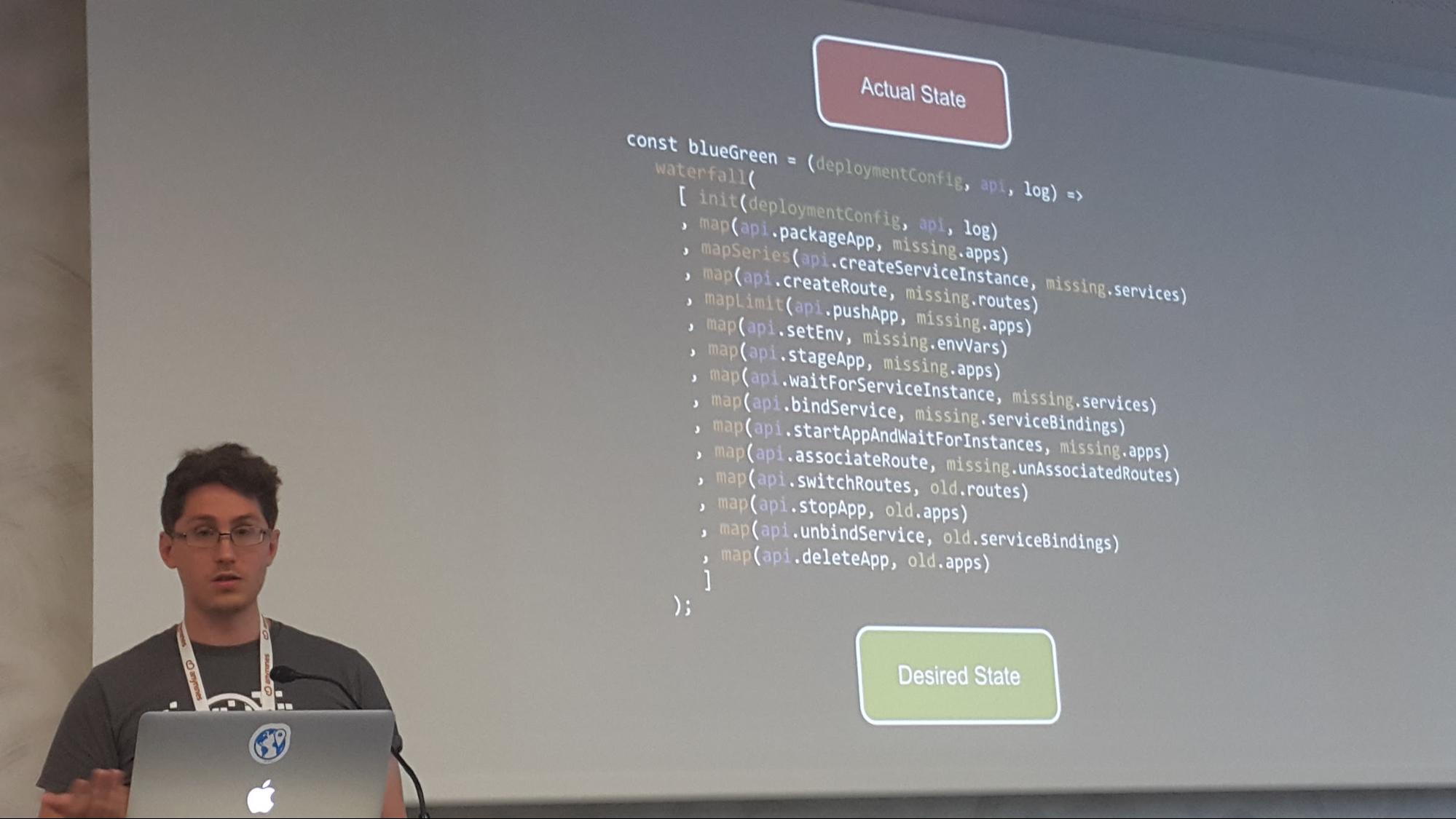 In his session, Sergey Sverchkov of Altoros explained how to solve networking, security, and multi-tenancy challenges when building an IoT solution for healthcare and still ensure fault tolerance and high availability. This was a continuation of the relevant session delivered at Santa Clara summit earlier this year. 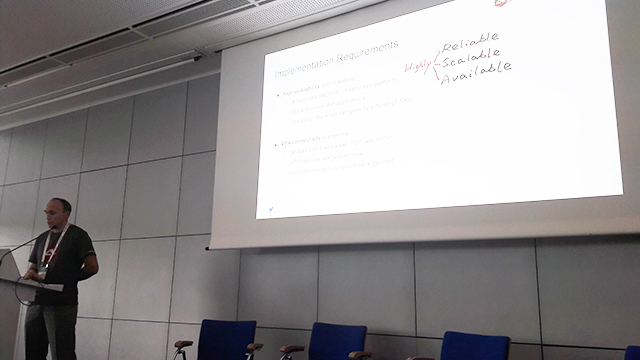 Together with Shyam Varan Nath (GE), Elena Travkina of Altoros delivered a use case on building a RFID-based baggage-tracking solution with Cloud Foundry. 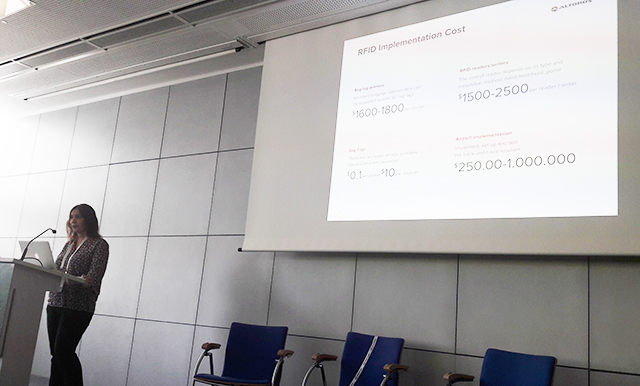 This project is being developed within the Smart Airline Baggage Management Testbed. The initiative aims to increase the ability of airlines to track baggage, preventing theft and loss. The testbed includes GE, M2Mi, and Oracle as lead members. During the summit, Altoros announced its participation in the testbed.

The system developed by the testbed participants addresses the global problem of millions of mishandled bags per year. It will track a bag from check-in to delivery—using RFID tags and a range of wireless devices. It smartly associates luggage with passengers and flights, tracking baggage location through GPS in real time and generating alerts / events, such as a bag located where it should not be or a weight change in a bag.

The baggage-tracking part is being created with GE’s Predix platform—based on Cloud Foundry. Read our blog post for more details.

A good year for Cloud Foundry

Cloud Foundry Foundation’s Sam Ramji and EMC Corporation’s John Roese closed out the summit. They compared the state of the technology now to what is was back then, stating “two years ago, most of us looked at this platform and thought that what we’re really about was building the next newly composed, innovative, disruptive application.”

Now, Cloud Foundry is stronger than ever.

“With the exception of Linux, this is arguably the largest adopted open source initiative in the world right now.” —John Roese, EMC Corporation

Throughout the summit, one key human factor—empathy—was brought up when it came to the rapid growth of individual organizations and of the Cloud Foundry community as a whole. It was no different in closing. 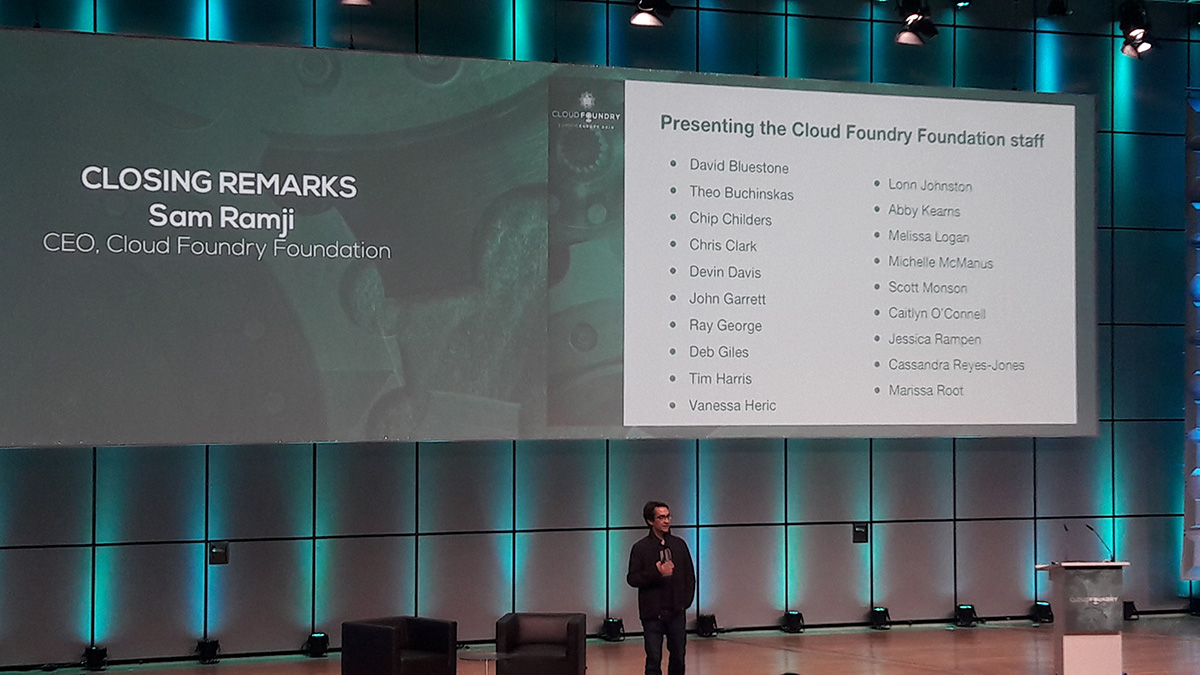 “One of the things we try to make an emphasis on in the Cloud Foundry community is human centricity and empathy.” —Sam Ramji, Cloud Foundry Foundation

This year’s Cloud Foundry Summit in Europe has drawn more than 700 participants (read the Foundation’s recap). The summit illustrates ongoing efforts by the Foundation and its members to offer a continually developing platform through major technology vendors within a diverse ecosystem, while retaining the personalized, community aspects of open-source software.

There was so much of the good stuff at the summit, it is impossible to cover everything within a single post. So, we’re all waiting for the videos to be posted to remember the time spent in Frankfurt and to learn something new about Cloud Foundry.

This recap is written by Roger Strukhoff, Carlo Gutierrez, Sophie Turol, and Alex Khizhnyak
with assistance from Juan Pablo Genovese.