by Roger StrukhoffSeptember 28, 2016
The first full day featured a keynote from the Cloud Foundry Foundation CEO Sam Ramji, a focus on community development, and presentations from key technology providers.

Community and ecosystem were top-of-mind topics during the first full day of the Cloud Foundry European Summit in Frankfurt.

Cloud Foundry Foundation (CFF) CEO Sam Ramji spoke of network effects and the ecosystem during his keynote presentation, noting the continued growth of the community. Cloud Foundry now boasts of 130+ core committers, 2,400+ contributors, and 31,000+ commitees. Membership in the CFF has grown to 65 companies, 195 user groups, and more than 53,000 individual members. 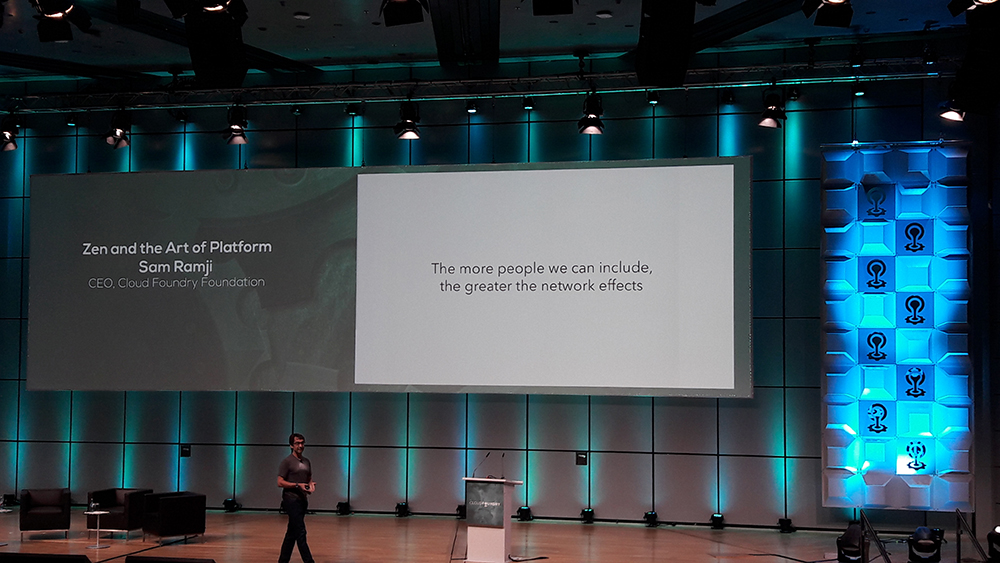 Stormy Peters, the CFF’s Vice President of Developer Relations, elaborated on the growing Cloud Foundry community, citing the diverse array of worldwide meetups, writeups, and related efforts. She said lessons learned included the importance of repeatable meetups with stable dates and venues, co-organizers, deep dives, the need to encourage first-time speakers to emerge from attendees, and “to keep the spirit going.”

Three big technology providers—IBM, HPE, and SAP—reported on their use of Cloud Foundry into their company strategies.

Senior Technical Staff Member Simon Moser and Architect Dr. Michael Maxmilien (a.k.a Dr. Max) made a presentation focused on IBM Bluemix, the company’s Cloud Foundry-based initiative. Bluemix has its roots in internal projects, but now has grown to be the “largest Cloud Foundry service,” according to Simon and Dr. Max. It is garnering 20,000 new users per week and 420,000 new apps per month in slightly more than a year of public deployment. 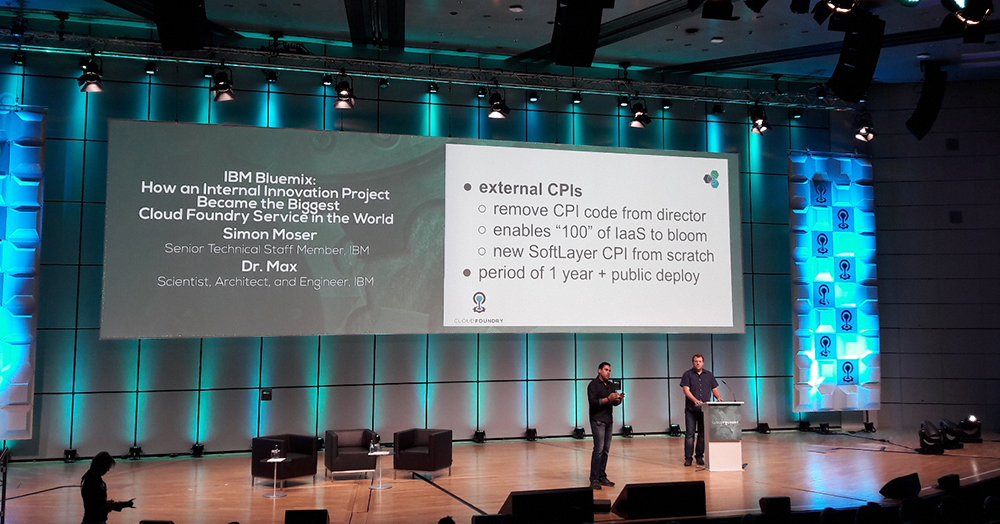 HPE was represented by Omri Gazitt, Vice President and General Manager of Cloud Native platforms. The company originally committed to Cloud Foundry with the acquisition of original distro Stackato from ActiveState, and now offers what it calls Helion Stackato. Omri discussed the twinned issues of increasing business agility while lowering costs, as it seeks to act as a partner in achieving business transformation for its enterprise customers worldwide. 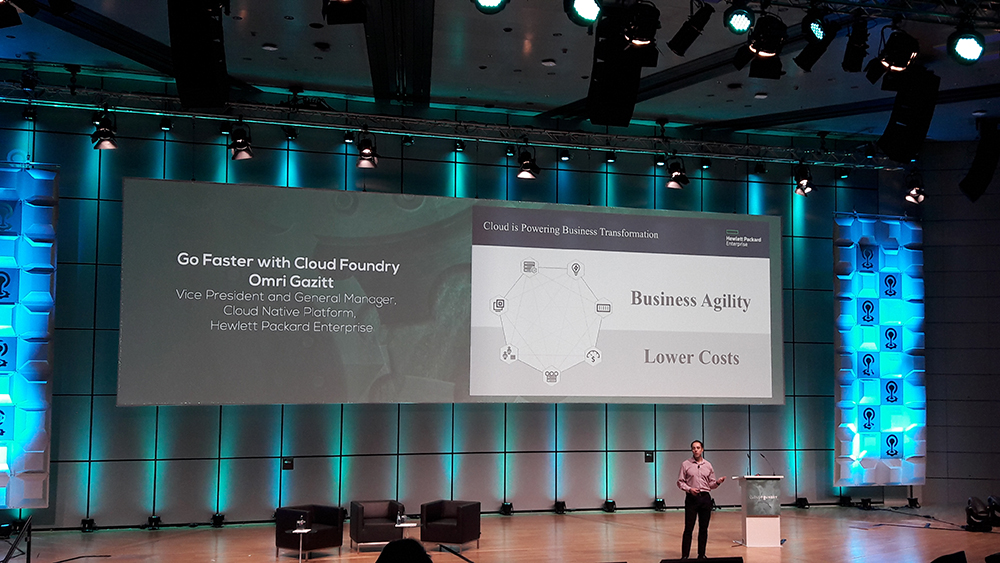 “Once you actually drive down the cycle time to deploy applications many times a week, then you can learn faster what you customers want and you can move faster.” —Omri Gazitt, HPE

SAP’s presentation by Rui Nogueira focused on providing fast, secure, scalable, continuously supported, available, and certified Cloud Foundry services through its HANA program. The company wishes to learn from its customers, work within a growing Cloud Foundry ecosystem, and contribute significantly to the platform’s ongoing development, particularly Diego and Abacus.

Rui also talked about SAP’s collaboration with IBM and Orange on developing:

IBM was also visible through a presentation on OpenWhisk by Technical Product Manager Andreas Nauerz, presented jointly with Altoros co-founder and CTO Andrei Yurkevich. We’ve previously reported on the OpenWhisk presentation. Andreas and Andrei also showed how OpenWhisk addresses the issue of making Cloud Foundry fast enough to provision containers within fractions of a second. 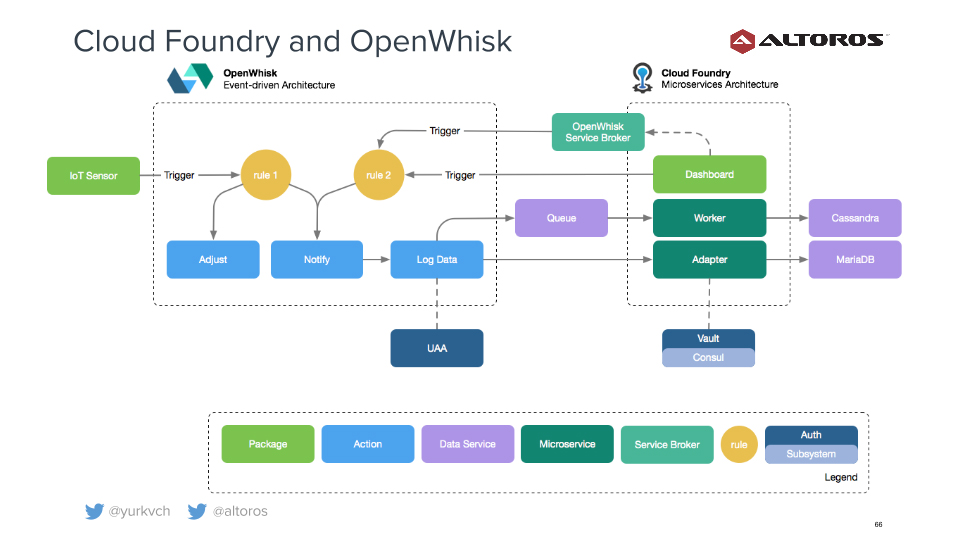 “In IoT apps, devices don’t have to be connected to a server 100% of time”
—Andrei Yurkevich, Altoros 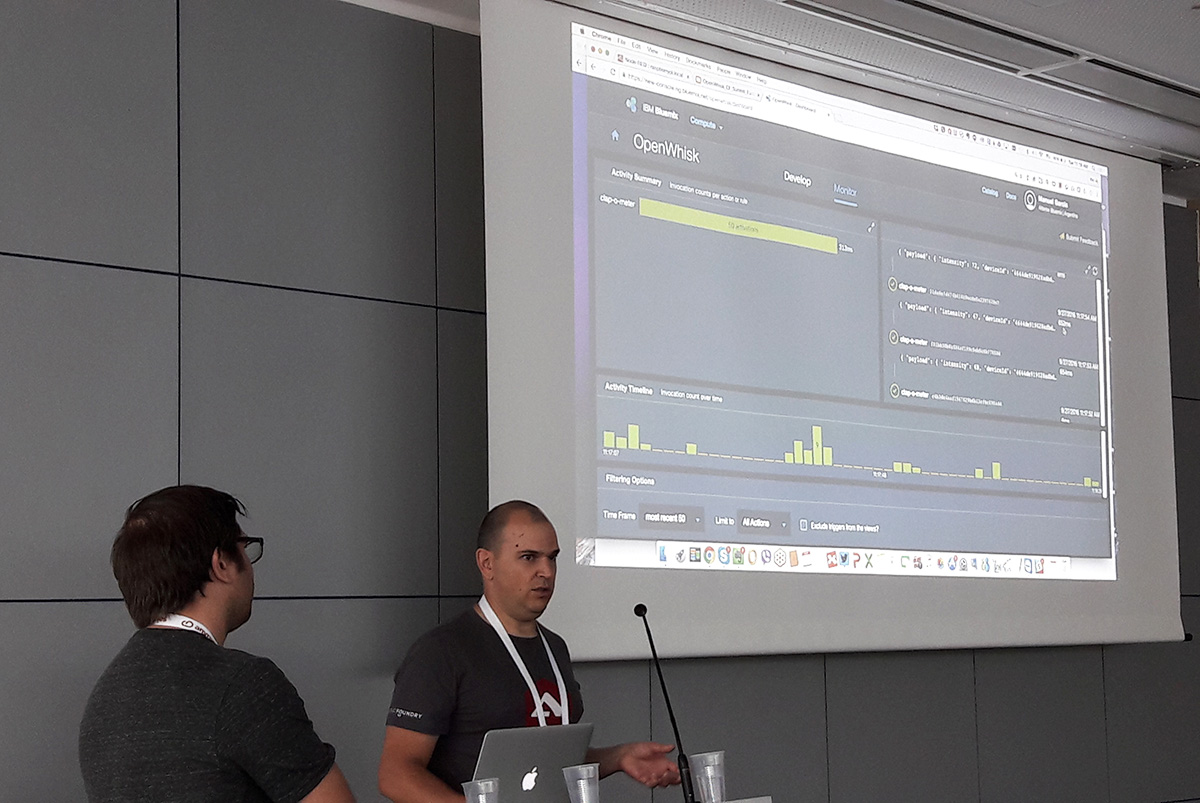 To summarize, OpenWhisk is all about:

In their session with Daniel Jones, Colin Humphreys of Pivotal focused on the CAP theorem and exemplified its usage based on the project for booking cinema tickets he was involved in. On adding the second server and database to provide minimal HA, Colin faced the situation when one seat could be booked twice. A conclusion he arrived at was: “Do you really need Cloud Foundry deployed in several DC?”

Colin explained that apps in Cloud Foundry are expected to be stateless as the platform itself has a state. There are Cloud Controller and UAA DBs, a blobstore, and routing tables—and they need to be in a consistent state if you have two or more CF deployments. 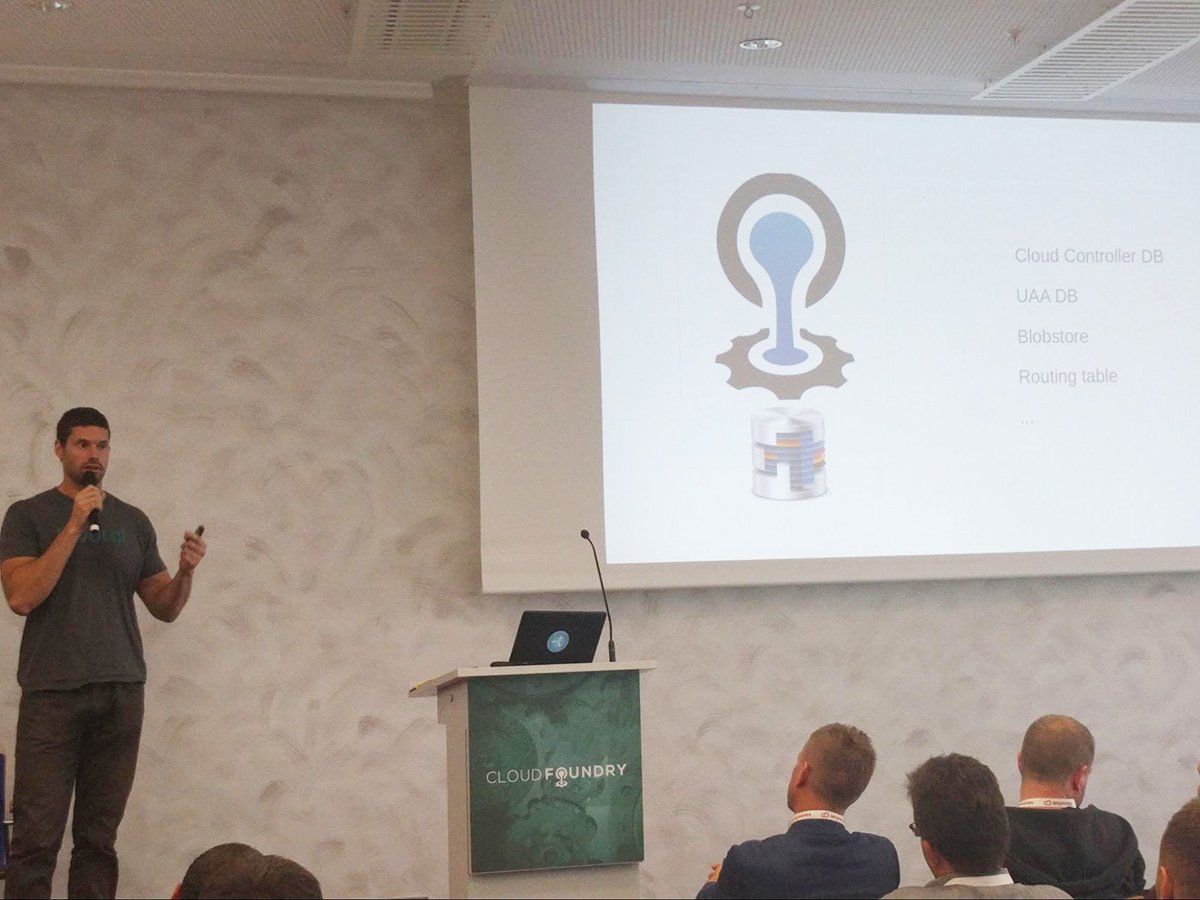 Daniel Jones followed his colleague with a presentation on multi-datacenter Cloud Foundry. He highlighted one of their tools—cf-plex—which allows teams to run the same set of commands in several Cloud Foundry installations. It supports interactive and batch mode. It can also do everything that standard Cloud Foundry CLI does. 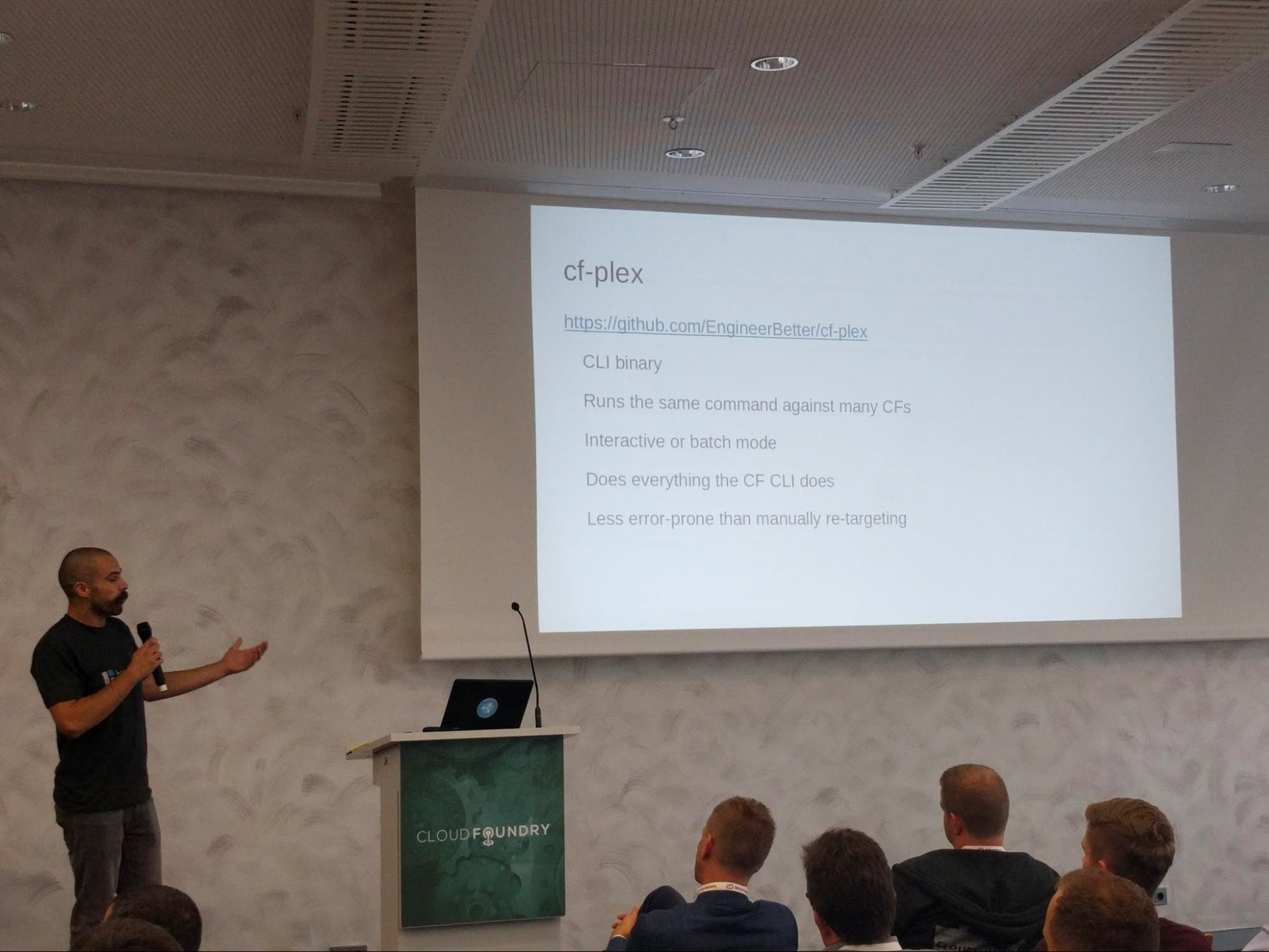 There was another project in progress Daniel mentioned—cf-converger—responsible for converging CF configurations based on YAML files. 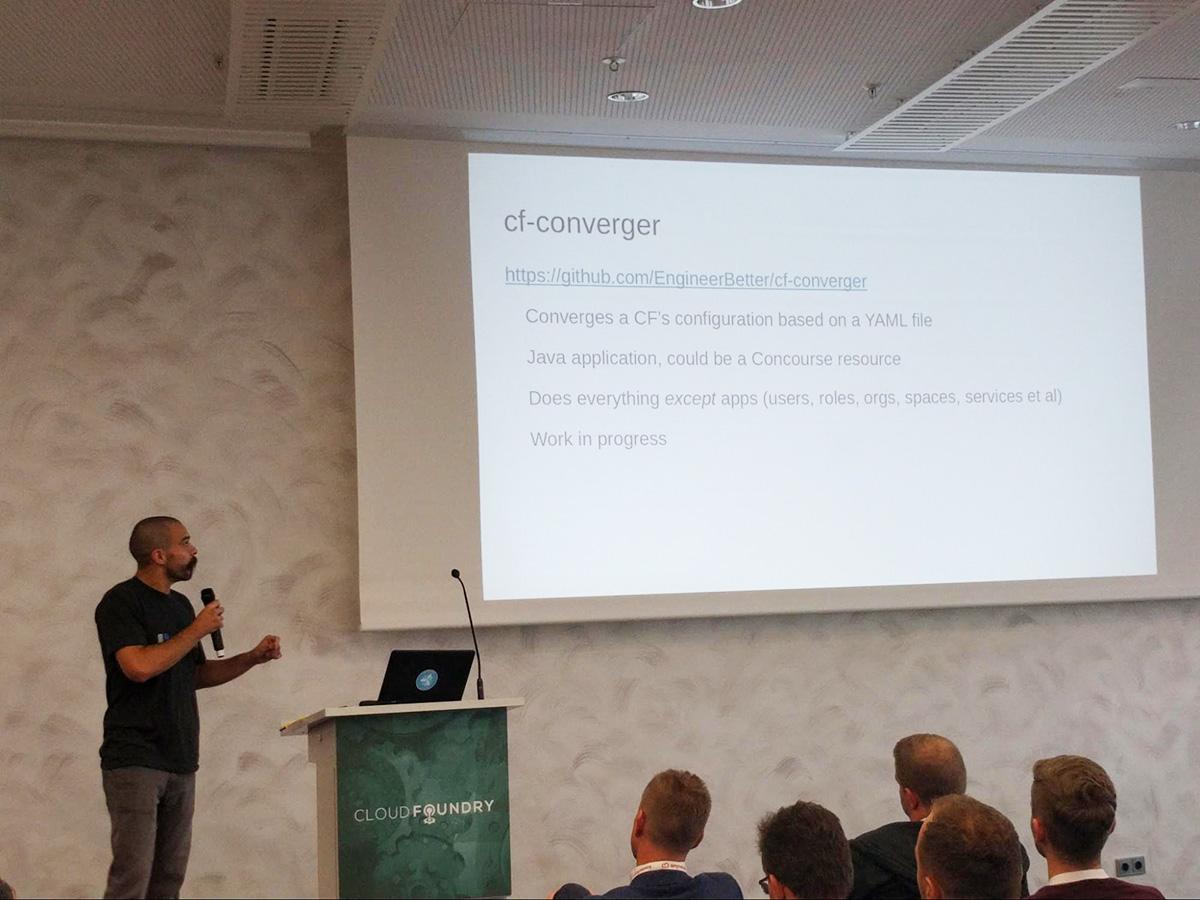 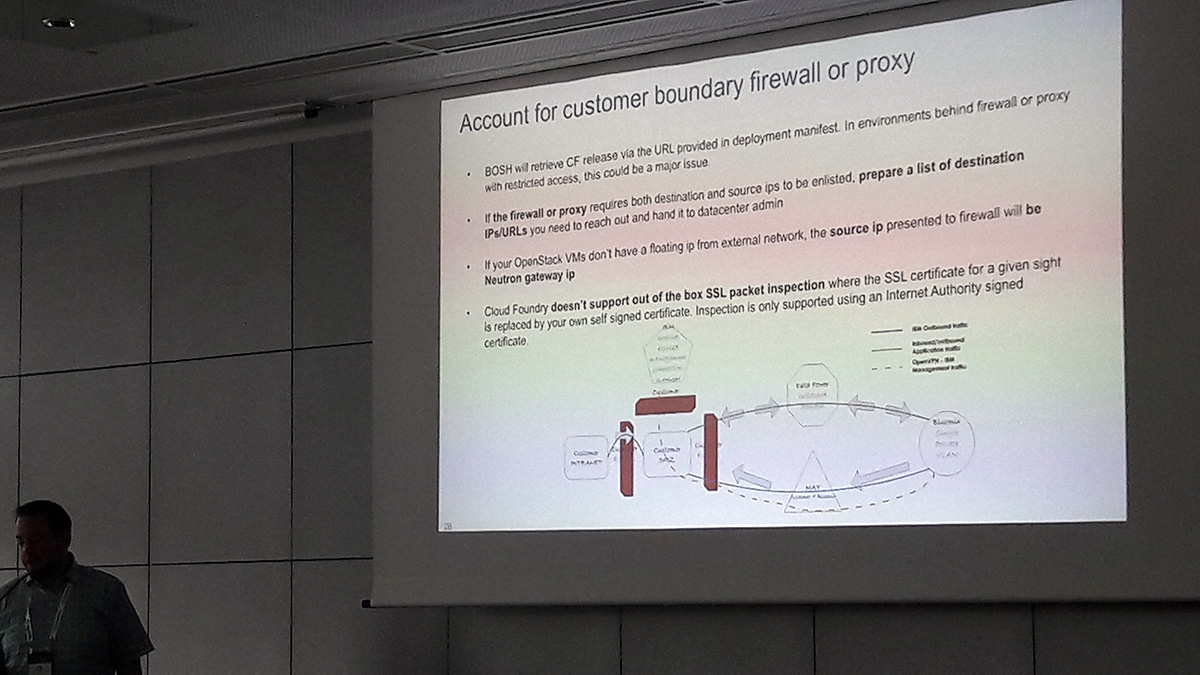 During the process, IBM learned the following lessons on optimal security and network:

IBM had another presentation, this time with Dr. Max and Nima Kaviani. The duo talked about IBM’s efforts in developing SPECserverless, a benchmark for serverless computing that would allow comparisons of different serverless platforms. 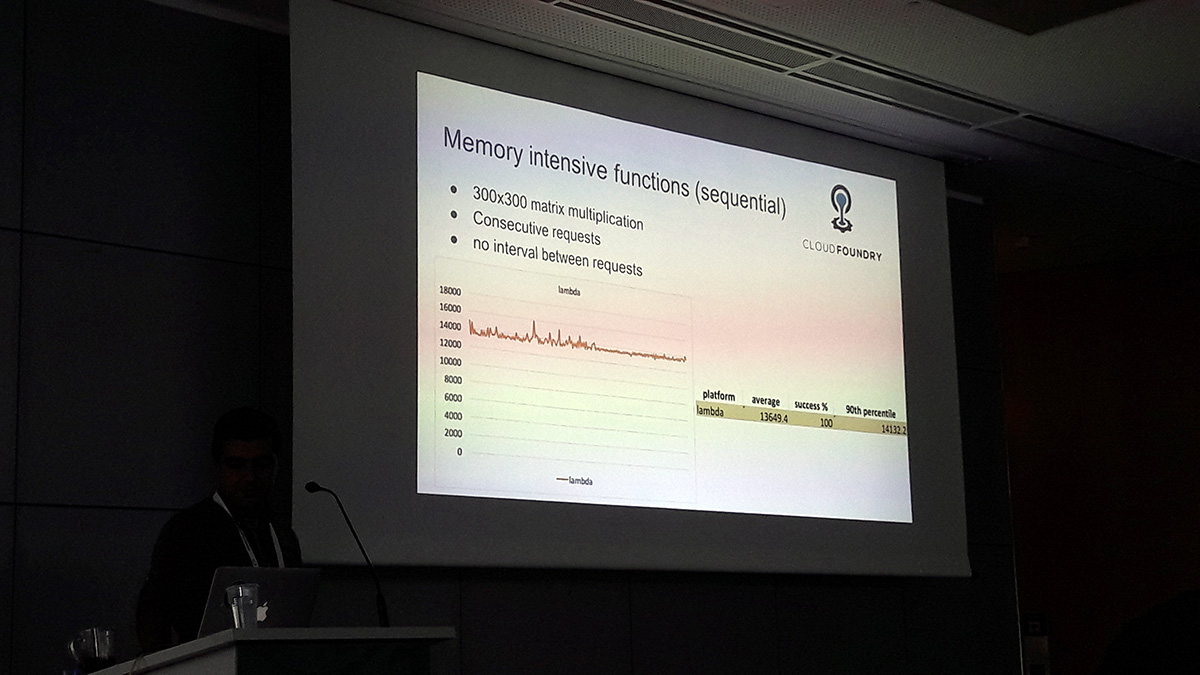 To start off, the benchmark has the following dimensions: 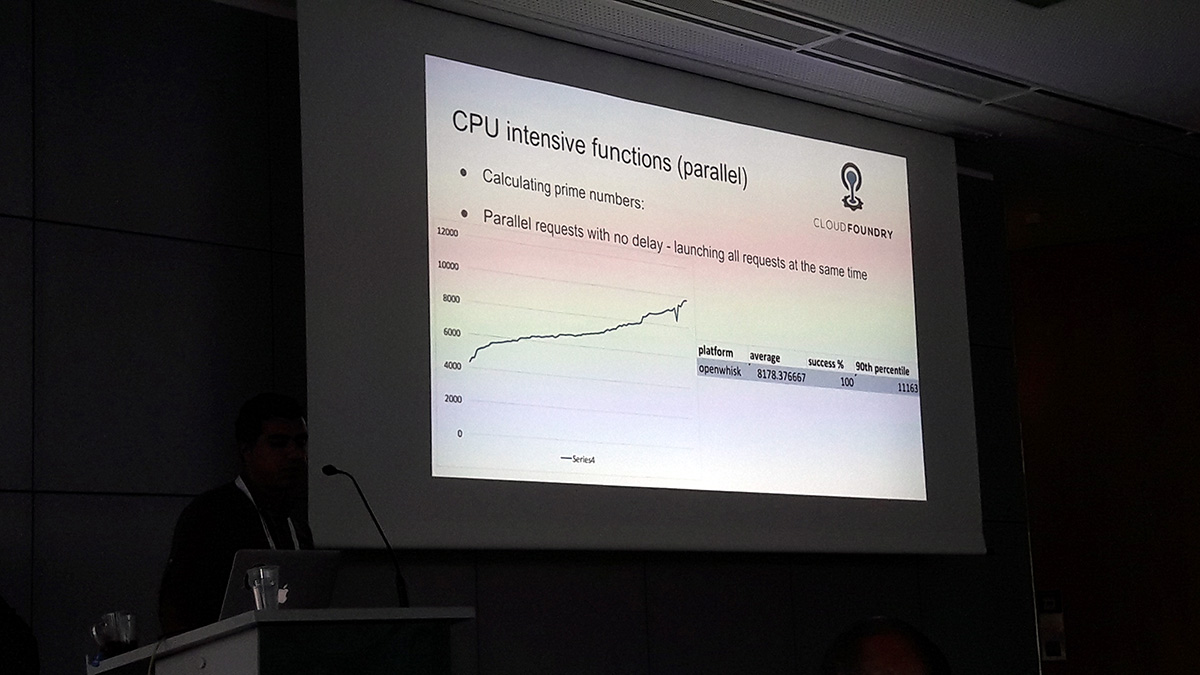 It also has the following categories:

With SPECserverless, IBM hopes to contribute to the eventual creation of a standard serverless benchmark.

Altoros, a Gold Sponsor of the summit, offered a presentation from Cloud Engineer JP Genovese that addressed the notion that Cloud Foundry is not necessarily for large enterprises only. He focused on small-to-medium businesses (SMBs) on determining what constitutes a minimal, yet reasonable size for a Cloud Foundry deployment.

“Cloud Foundry is not only for giants.” —Juan Pablo Genovese, Altoros

Noting the necessity to stay within budgets but deliver quickly, JP outlined a minimal product costing that includes Cloud Foundry, MicroBOSH, and various AWS services delivered through reserved instances costing less than US$15,000 over the course of a year. He then took the audience through a technical tour de force (which we will cover in a later article) that could reduce even that amount by 75%. 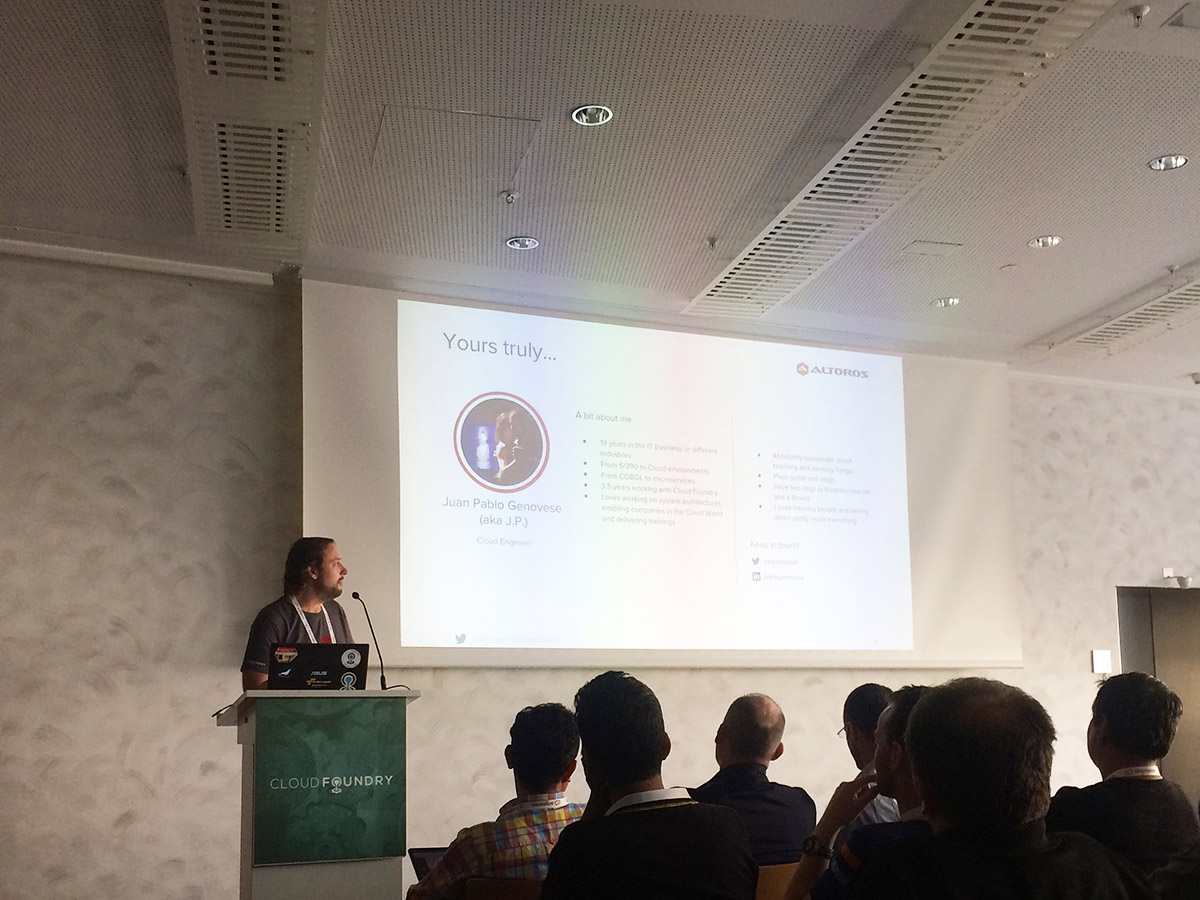 The first day of the summit was rich for different news—read the overview prepared by the Cloud Foundry Foundation. Altoros was also among those to add to the mix: we announced our participation in the Smart Airline Baggage Management Testbed. (You will find a detailed overview in our tomorrow’s recap.) Exclusively for the summit, Altoros also introduced a Cloud Foundry CLI plugin for managing Predix Analytics Catalog. So, if you’re using GE’s Predix, give it a go and feel free to send us your feedback!

This recap is written by Roger Strukhoff, Sophie Turol, Carlo Gutierrez, and Alex Khizhnyak
with assistance from Kirill Grigorchuk.