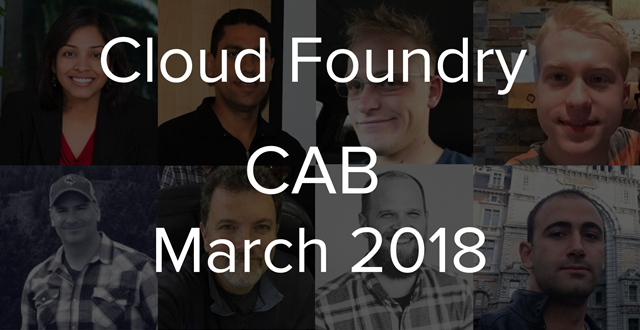 by Roger StrukhoffMarch 22, 2018
Developers can benefit from a new local-machine tool, and deployers will cheer the new service broker.

A proposal for a Cloud Foundry service broker for Microsoft SQL Server and a demo of the new CF Dev extension highlighted Cloud Foundry Community Advisory Board (CAB) meeting of March 2018. This month’s call also featured a preview of the upcoming Cloud Foundry summit in Boston and a couple of brief reports from the project management committees.

The proposal for a Cloud Foundry service broker for Microsoft SQL Server was presented by Mike Lloyd and Zach Brown of Pivotal. According to the proposal, “this project aims to develop an open service broker that automates tasks associated with creating schemas, provisioning users, and providing credentials for applications, wishing to make use of the SQL Server databases within Cloud Foundry.”

The document outlines a problem of growing SQL Server popularity with an existing service broker that has not been updated in several years. Users today must thus either rely on a user-provided service or write their own custom service broker.

Rather than try to redeploy or heal the existing deployments, the joint Pivotal and Microsoft team has chosen to develop a new service broker, according to Mike. “We want to gain community trust (with this project), so it will be owned by the Cloud Foundry Foundation,” he pointed out. Although the new service broker doesn’t yet support Pivotal Cloud Foundry (PCF) 2.0, plans are that it will soon.

In addition to working with Pivotal to develop this new open-source service broker, Microsoft intends to support it over the long haul, according to Mike and Zach.

An MVP has already been developed and tested against a recent version of SQL Server running on Linux, according to the proposal. The MVP is a Spring Boot app that can be pushed to Cloud Foundry and registered via the usual service broker management APIs.

While on the topic of Microsoft, Zach also mentioned there will be a cloud-native .NET track at the Boston summit, and there is now a Steeltoe .NET SDK for Cloud Foundry. IBM’s Michael Maximilien (Dr. Max), who moderated this month’s call as always, noted his approval of this development, saying that “getting .NET world into Cloud Foundry is brilliant.”

Continuing a run of impressive appearances on CAB calls from SAP’s Bulgarian office, Nikolay Valchev talked about the new CF Dev project, a (relatively) lightweight way for Cloud Foundry developers to do their work on local machines.

CF Dev is in the proposal stage, and was announced the day before the call, Nikolay said. It is offered up as “the successor to PCF Dev,” according to the proposal. The extension is described as “a deployment of BOSH and cf-deployment that runs locally in Garden containers. It uses native hypervisors to start quickly with zero external dependencies.”

Additionally, “PCF will be deployable to CF Dev using a future integration offered by Pivotal to anyone who has a PivNet account,” according to the proposal. “The same developers will develop both CF Dev and the PCF plugin for CF Dev, but they will be separate products.”

CF Dev can also be compared with CF Local. The proposal points out that, unlike CF Local, CF Dev runs on native hypervisors on local machines (macOS, Windows, and Linux) and includes a full BOSH Director.

Stephen Levine of Pivotal and Scott Sisil joined the conversation, with Stephen deploying the popular Spring Music app on CF Dev. He said the team has also successfully deployed the RabbitMQ message broker on CF Dev.

With a goal of getting CF Dev to run well on machines with 8 GB or RAM, the team currently recommends 16 GB of memory and says it will take 10 to 15 minutes to boot. Users are also considered to be administrators and, thereby, are granted all the powers within. 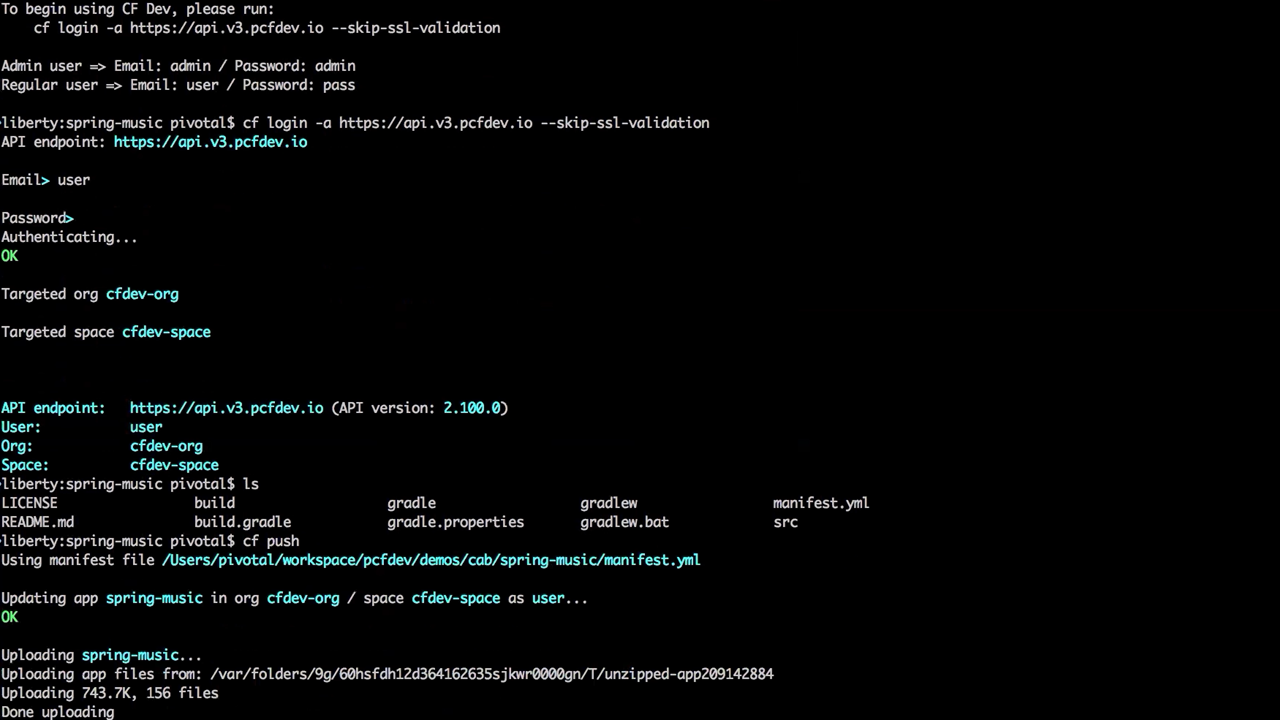 Stephen noted that CF Dev is currently limited to macOS, but work is already being done to make it available for Windows. Additionally, the project uses BOSH Lite stemcells.

Dr. Max noted that through this effort the team “is making developers way faster,” always a goal in the world of cloud-computing development and deployment.

See you in Boston

Swarna Podila from the Cloud Foundry Foundation said registration sits at about 795 people with a little less than a month before the summit in Boston. She noted there will be the Unconference on Tuesday, April 17, the night before the summit.

Anyone interested in attending should contact the Unconference producer Dave Nielsen. There will also be a hackathon during the summit, she added.

Swarna also referred to the upcoming Cloud Foundry Day at the KubeCon event in early May in Copenhagen. She said there were three to four times as many submissions for the Cloud Foundry Day than anticipated. Swarna noted the team is also working to hold a similar day at KubeCon in Shanghai (November) and Seattle (December).

Next month’s call will be held at the Boston summit, with the time to be scheduled soon. Anyone willing to attend can follow what’s going on by subscribing to the Cloud Foundry Slack channel.

Blockchain Growth: What Do We Need to Understand About It?
CATEGORIES