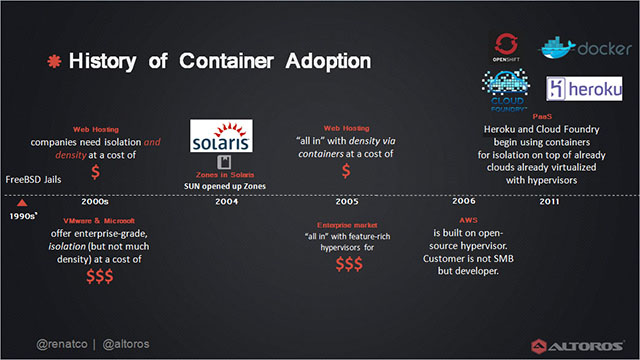 by Renat KhasanshynJune 5, 2014
Excited by the announcement of the Cloud Foundry’s BOSH release for Docker, I decided to come up with our opinion on the future of containers.

This blog post recalls how the containers appeared, describes why they become trendy, mentions some challenges, and tries to predict what to expect next.

Softlayer, United Internet, 1and1, and GoDaddy use containers since 2000s for multi-tenancy, selling “slices” of servers (shared and VPS) for more than a decade. Around 2000, hypervisors solved the multi-tenancy problem “the enterprise way” and at an “enterprise” price tag.

About the same time, web hosting companies dealt with a similar technical problem, but in a different market. It was the market that could not afford the “enterprise” price tag of the multi-tenancy solution via hypervisors, because they were selling very tiny “slices” of servers to these SMBs.

Containers dominate these “first-generation” cloud offerings. By 2002, hosting companies were the first to develop and monetize the “10x efficiency factor” described by Red Hat’s CTO Brian Stevens during the Red Hat Summit. They had no choice but to solve the multi-tenancy conundrum. Today, more than 80% of traditional web hosting companies rely on containers for multi-tenancy.

Docker is the most “trendy,” but not the most advanced container orchestration technology

By 2007, VMware lost the battle for the title of #1 provider of multi-tenancy solutions for the hosting market. A few little-known companies emerged as winners. These few companies hold the most advanced container tech out there.

Since 2000 and until today, container technologies (LXC) and container orchestration (Docker) are facing serious problems getting changes accepted by the upstream Linux kernel communities.

Respect to Red Hat for embracing container-based technologies, because they are embracing disruption of their own business model. Since the disruption is relatively distant and adoption of containers in the enterprise is relatively slow, Red Hat will have enough time to prepare for the next wave of growth by taking control over next-generation cloud-native operating system, such as CoreOS.

Container’s future is bright, but not without challenges

I believe, containers will ultimately win over the Type 2 hypervisors for cloud-native workloads. However, they face some stormy winds:

Will Red Hat succeed in injecting vigor into its OpenShift platform for developers through this container expertise?

First of all, many thanks to Red Hat and Docker for a great job popularizing containers among developers. Developers rule in this world and will get what they want (containers).

The momentum surrounding Cloud Foundry will likely result in domination of the open PaaS category. I believe, OpenShift will either join Cloud Foundry or will be taking advantage of any weakness in the Cloud Foundry ecosystem to carve out a space of its own.

Do we need another version of Red Hat Enterprise Linux? Not really. Instead, we need a solid cloud-native operating system. We need an operating system that is light-weight, and without the junk that comes with a “one-thing-fits-all” design. CoreOS and OSv give us a great peak of what a cloud-native OS will offer to the end users.

Will containers really catch on?

I am very bullish on the future of containers and believe that containers, not VMs and hypervisors, will dominate cloud-native workloads in as few as 10 years from now. Taking into account the growing interest to containers from the PaaS vendors (which are on the rise as well), we can also expect these two hot trends (PaaS and containers) to support each other in the long run.

Why Altoros Joins the Cloud Foundry Foundation
Next