Delivery pipelines are designed to automate the roll out of new features and updates. In theory, such pipelines are useful in minimizing the amount of manual work needed to release or maintain software. However, in practice, there are multiple problems associated with delivery pipelines, as most companies build them manually and ad hoc:

During a Kubernetes meetup last December, Jürgen Etzlstorfer of Dynatrace highlighted the above-mentioned issues and explained how keptn can help. In addition, he focused on the importance of smooth integration of components for CI/CD.

“When building a pipeline, we often can come up with a smartphone that’s not very smart,” said Jürgen. “It can do everything that you want to do, but you have very fragile integrations, and, at the very end, you do not want to touch it anymore.” Therefore, to improve the stability of the whole pipeline, it is critical to provide stability on the integration points.

“We want to have all the functionality, but we want to have it on this very stable platform. We want to have nice integration points, where it is easier to manage the delivery of great software.” —Jürgen Etzlstorfer, Dynatrace

Jürgen then introduced the keptn project aimed to help with automating CI/CD in Kubernetes deployments. It is an open-source event-based control plane for continuous delivery and automated operations across cloud-native applications. 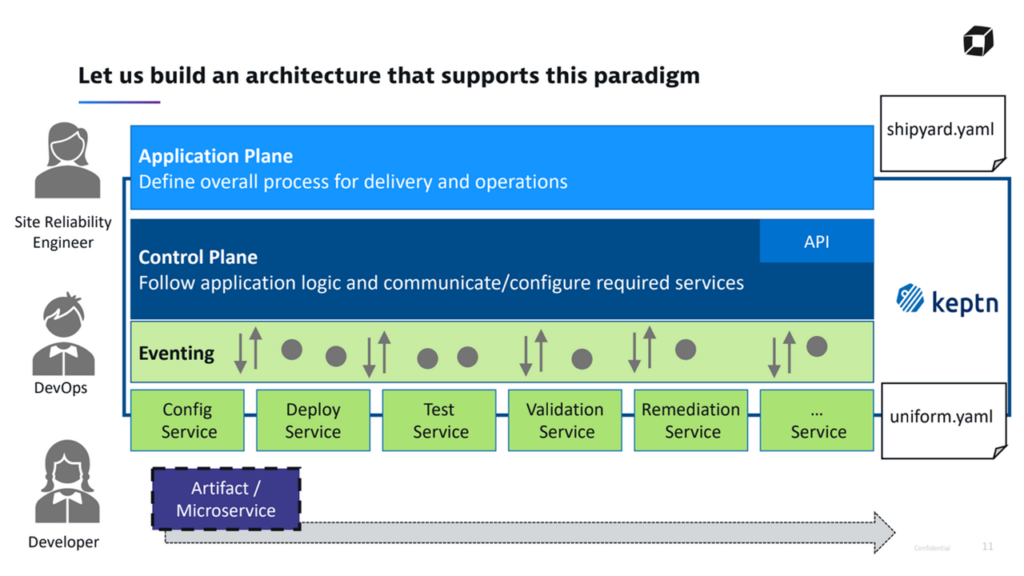 In a nutshell, keptn enables users to:

According to Jürgen, keptn relies on specification (.yaml) files in order to determine how software is deployed. Shipyard.yaml specifies the stages and what happens in each of the stages. For instance, development, hardening, and production stages are described here. Uniform.yaml designates which services react to certain events. For example, the deploy-svc and performance-test services, as well as the events they listen to are described here. 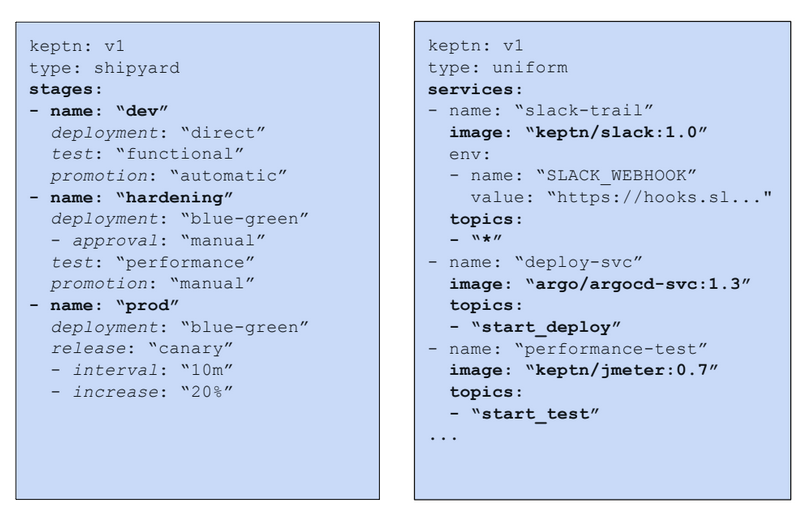 By splitting the specifications, keptn provides a clear separation of concerns. Site reliability engineers can add new stages, while DevOps engineers can define the tools to be used for each new stage.

“There is a very clear separation, and everything can be updated individually. It is not so tightly coupled, so that you do not run into problems.” —Jürgen Etzlstorfer, Dynatrace

Additionally, keptn makes use of “quality gates.” According to Jürgen, these are executed after the testing phase. In his example, Jürgen explained how the Service Level Objective (SLO) qualifies the criteria for passing a service or issuing warnings to users. 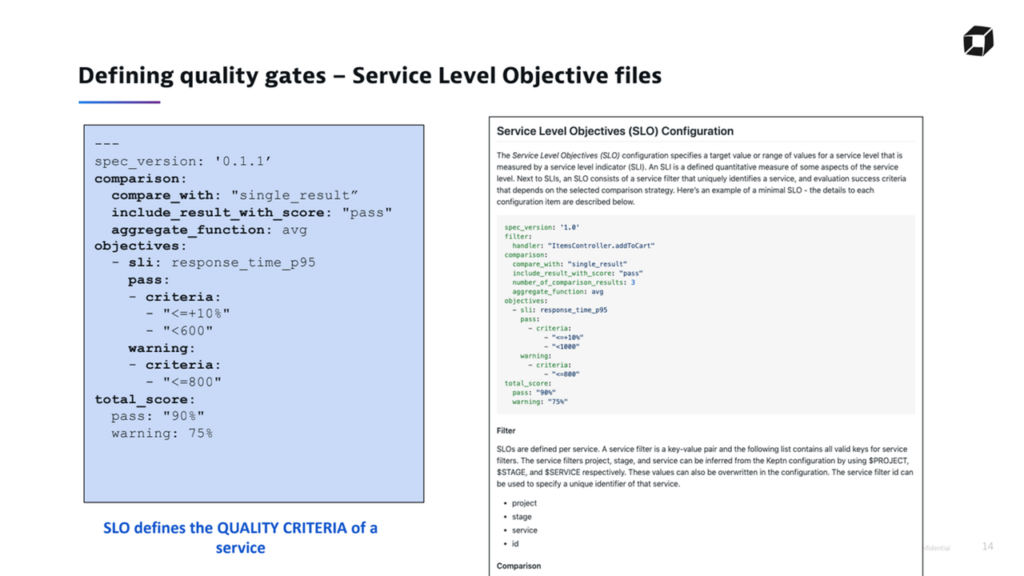 An example of an SLO configuration (Image credit)

The ketpn’s bridge provides an interface to browse all the events sent within the solution, as well as to filter events based on context. This bridge also monitors all the events and the resulting actions in order to provide real-time information tracing.

To further understand keptn, Jürgen explained its workflow in order. The workflows begin once when the new-artifact event is sent either through the keptn’s API or CLI with the command below.

The solution will then update its internal configuration, deploy the artifact, and update the environment. Following that, keptn will run tests and will validate each test with the quality gates. Based on the results from validation, the artifact will roll back or be kept for the next stage. 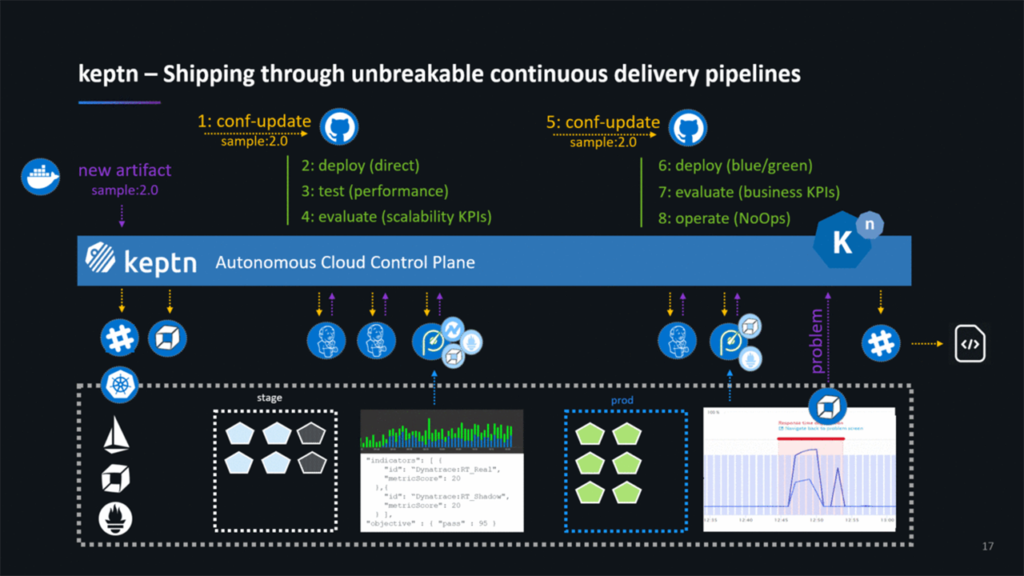 In a scenario where a user needs to onboard or roll out a new artifact, one would push the image to a container registry, and this will inform keptn to start a new deployment. In response, the solution will update the internal Git repository and will begin deployment and testing in the user’s cluster. After that, keptn will reach out and fetch all the metrics from a monitoring provider.

Next, the system will update all the branches and move on to the next stage with a blue-green deployment. Once again, keptn will fetch metrics from a monitoring provider. Depending on the results, it will either pass or roll back, then notify a user. 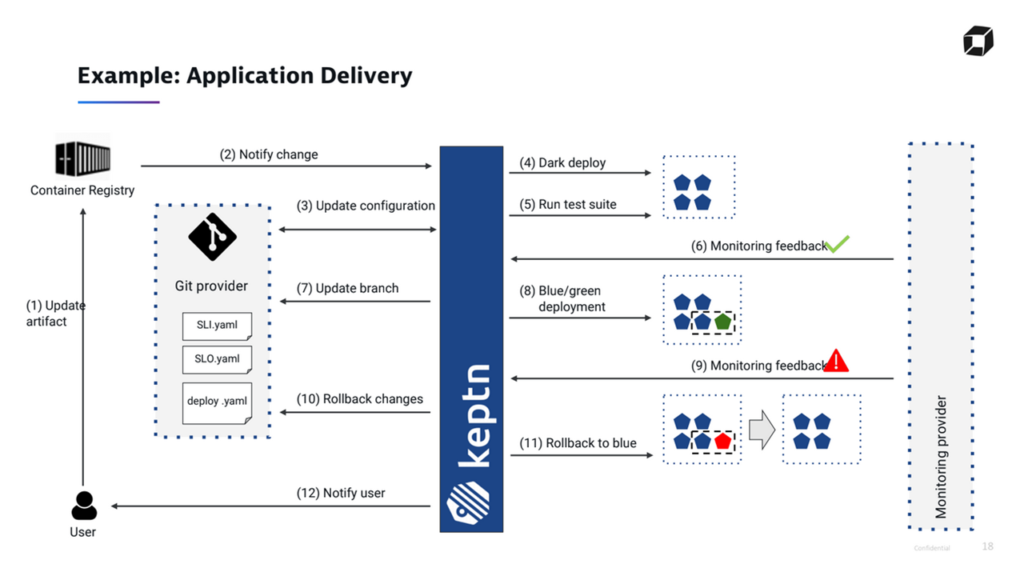 Currently, keptn v0.6.0 is available, providing basic services needed for deploying an artifact to a Kubernetes cluster. These include configuration, deployment, testing, validation, and remediation services. keptn is also proposed as a CNCF (the Cloud Native Computing Foundation) sandbox project.

keptn can be installed on top of the following Kubernetes distributions:

You can track the project’s development in its GitHub repository. Additional information, as well as tutorials are available at the keptn’s website.

In this video from the Kubernetes meetup (December 2019), Jürgen Etzlstorfer introduces keptn.

Below, you will find the slides presented by Jürgen.

In this video, Andreas Grabner and Dirk Wallerstorfer of Dynatrace overview keptn and explain how to get started with it.

Jürgen Etzlstorfer is Technology Strategist at Dynatrace. He is a core contributor to the keptn project and is responsible for the strategy and integration of self-healing techniques and tools into the keptn framework. Jürgen loves to share his experience, most recently at conferences on Kubernetes-based technologies and automation.
The post was written by Carlo Gutierrez, edited by Sophia Turol and Alex Khizhniak.