by Alesia BulanokMarch 1, 2017
Following the 18F initiatives in the US and the GDS projects in the UK, Australian authorities have adopted Cloud Foundry to transform delivery of their services.
Why read this?
Use Case for Cloud Foundry:

So far, the Digital Transformation Agency (DTA) has such services as Citizenship Appointments, Digital Marketplace, Performance Dashboards, etc. In addition, the agency developed a gov.au prototype to facilitate user-government interactions in a variety of official procedures. In October 2016, DTA already had 37 apps in production and 225 apps in development.

Lessons learned:
What else is in the stack?

DTA is an executive authority subordinate to Australia's Prime Minister and Cabinet. The agency assists the Australian government in guiding, overseeing, and driving its digital transformation and information and communications technology (ICT) agendas.

DTA has grown from the Australian Government Information Management Office (AGIMO) of the Finance Department. For now, the agency has established two delivery hubs—one in Canberra and the other in Sidney—and adopted the Digital Service Standard.

In January 2011, the Australian government released an open-source software policy, thus virtually withdrawing from the position of informed neutrality towards stimulating use of open source. About the same time, the country’s IT Industry Innovation Council started to explore the potential of cloud computing innovations.

It was also in 2011 that the Australian authorities first started to evaluate Cloud Foundry. The ACMA report (November 2011) mentions Cloud Foundry as a PaaS that eliminates the need for developers “to be concerned with the underlying infrastructure, as all services they required are facilitated from within the cloud.” (Note that Cloud Foundry—as we know it today—was released on April 12, 2011.)

Approved in October 2014, the Cloud Computing Policy demanded that government agencies must adopt cloud where it is “fit for purpose, provides adequate protection of data, and delivers value for money.”

Finally, the Digital Transformation Agency, created in 2015, was charged with the task of transforming the way government delivers services, while focusing on user needs and modernizing the technical side of the process. The transformation was driven by the need to minimize bureaucracy and to make online interactions more transparent and understandable to both users and involved intermediaries. 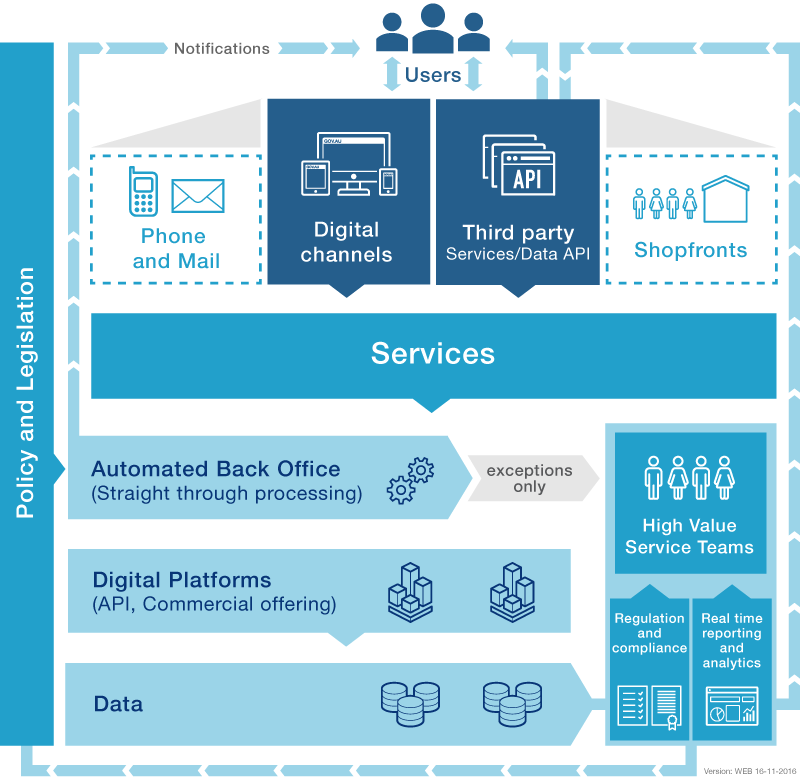 With focus on open source and a standardized technology stack, DTA set off with the following services: Citizenship Appointments, Import permits, Digital Marketplace, and Performance Dashboards.

Cloud Foundry at the core of transformation

Speaking at the Cloud Foundry Summit 2016 in Santa Clara, , then Head of Development at DTA, highlighted the challenges agency faced while making the transformation work:

To address the challenges, DTA delivered the cloud.gov.au platform, using Cloud Foundry as its PaaS of choice. 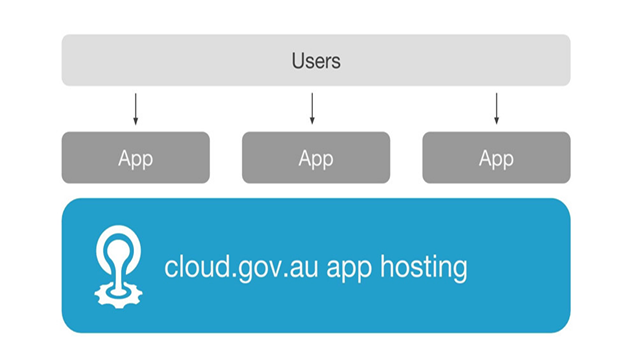 “The whole idea with cloud.gov.au is that we’re trying to make it easy for the teams to be able to run, test, and measure the applications that make a service up.”
—Lindsay Holmwood, DTA

In addition to hosting applications and storing databases, the cloud.gov.au platform helped DTA to enable continious delivery/deployment (CD). The CD pipeline is now the only way for delivery teams to push changes into production, which seems to be the right solution to the standardization issue.

“The key point here is about defining very clear interfaces and not dictating implementation to the team that is actually building those services.”
—Lindsay Holmwood, DTA

To build the CD pipeline, DTA started off with a cheap open-source SaaS—Jenkins CI. However, it turned out the tool requires a lot of manual configuration and is not quite up to the agency’s needs. Therefore, DTA began looking for a more specific SaaS and is now moving to Circle CI.

Moreover, using Cloud Foundry gives DTA access to a pool of resources that have already been created under other projects for government agencies (18F, GDS, etc.), thus saving a lot of time and efforts.

Achievements on the way of transformation

With the cloud capabilities and best practices at their disposal, DTA can already boast of success stories in transforming user-government interactions: 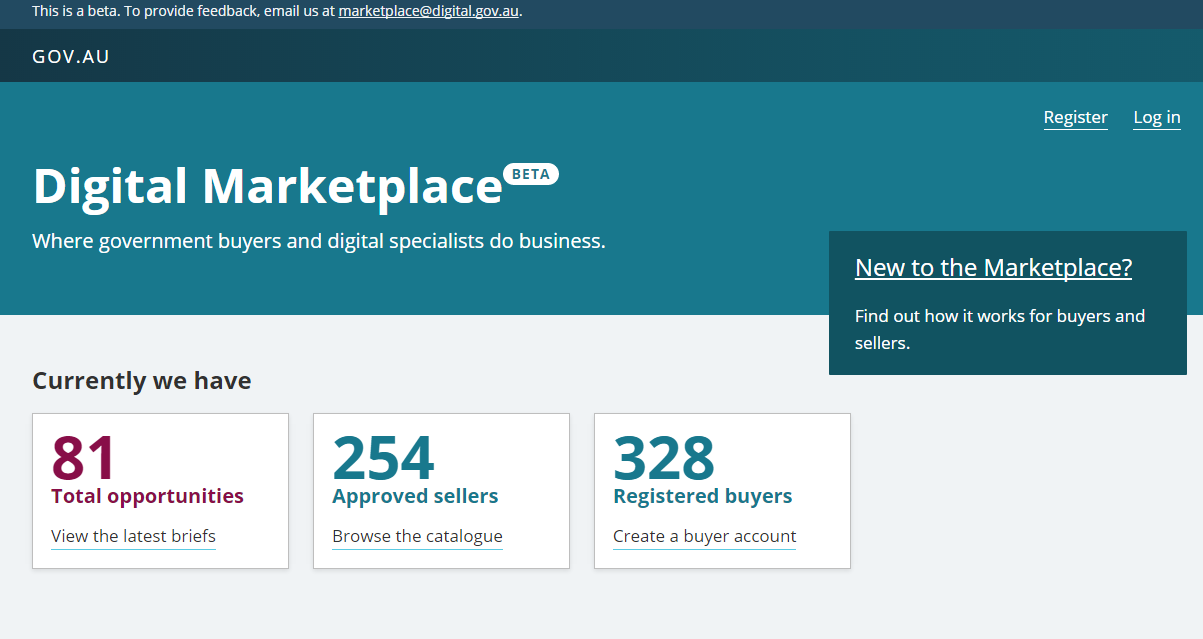 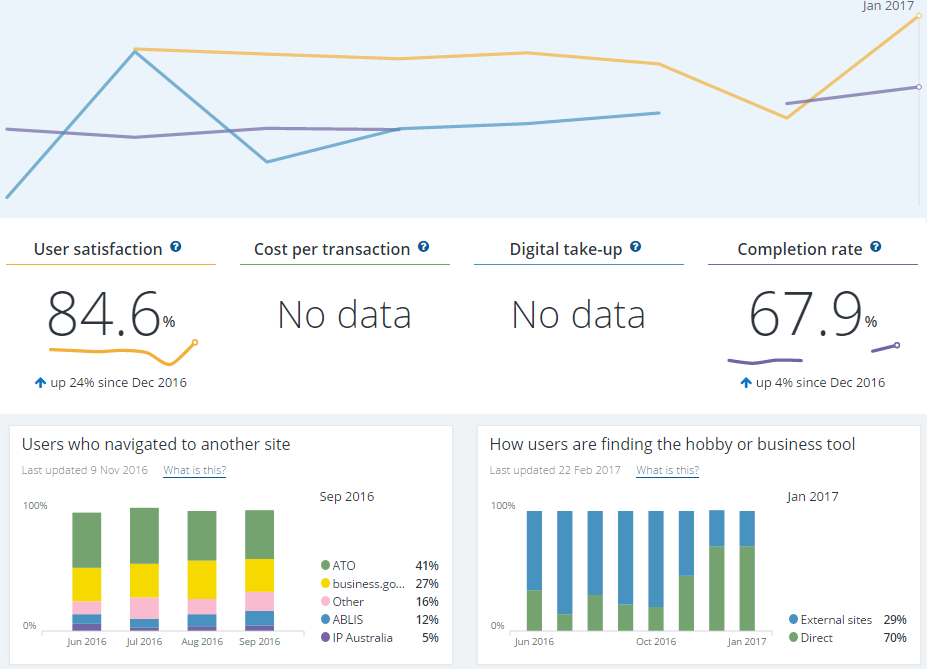 In addition, DTA developed an alpha prototype of the gov.au integrated solution that syncs up services and information from websites of particular government offices to aid users in interactions with the offices. 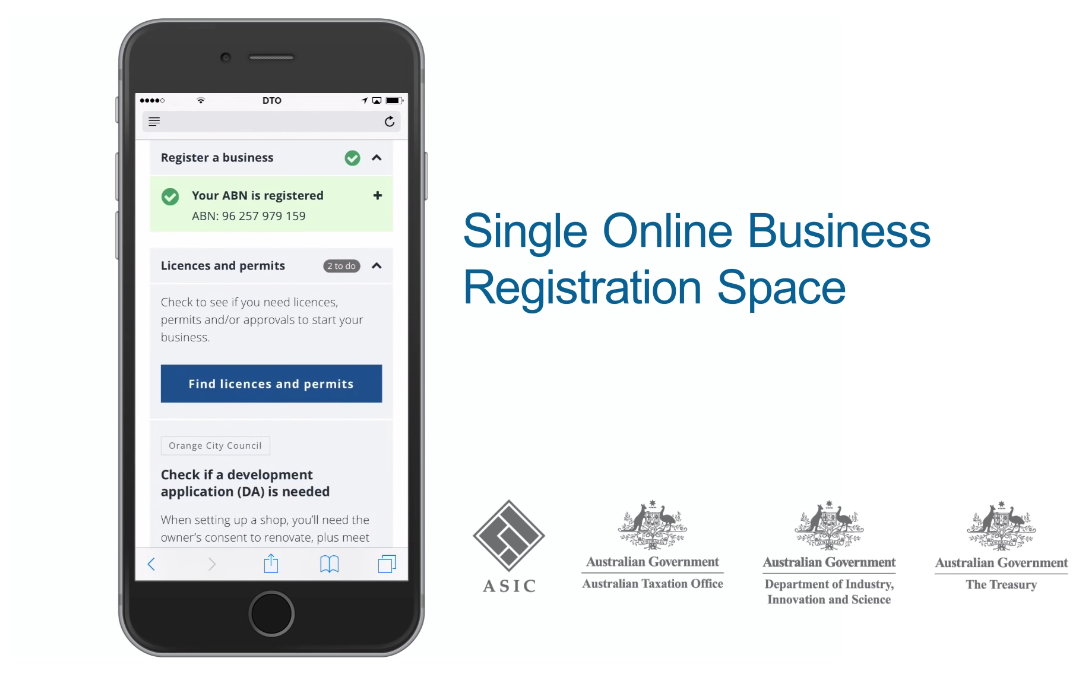 In addition, Cloud Foundry has contributed to achieving the following: 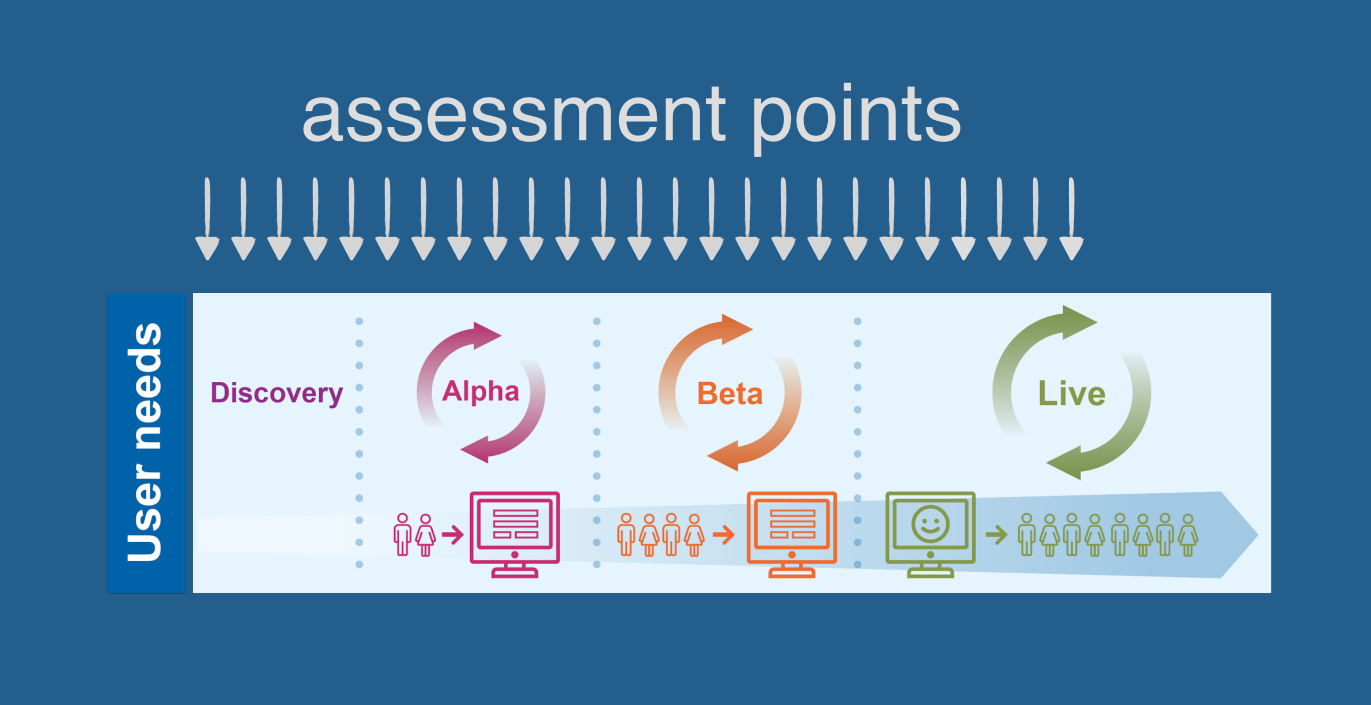 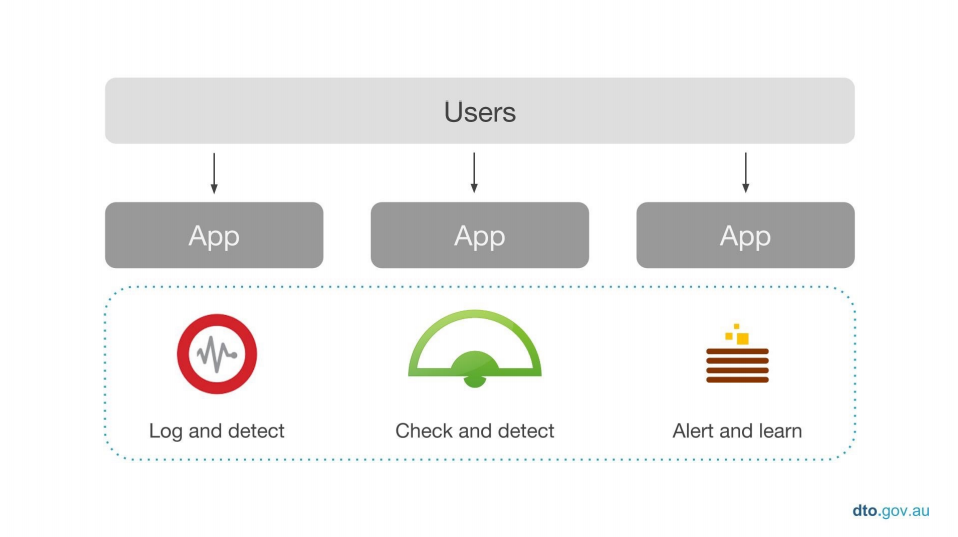 With a number of services already delivered in beta, DTA continues its travel down the road of digital transformation. Another important issue to address in the near future is establishing a digital identity. An alpha prototype of the solution is being built now to enable users to verify their identities while accessing government services online.

DTA has also adopted the Trusted Identity Framework that outlines a set of principles and standards to define a unified approach to establishing identities across government. The document is believed to aid in accelerating the development process and encouraging collaboration between government departments.

Below is the roadmap that captures the milestones of DTA’s mission—changing the way government delivers its services to bring it closer to users. 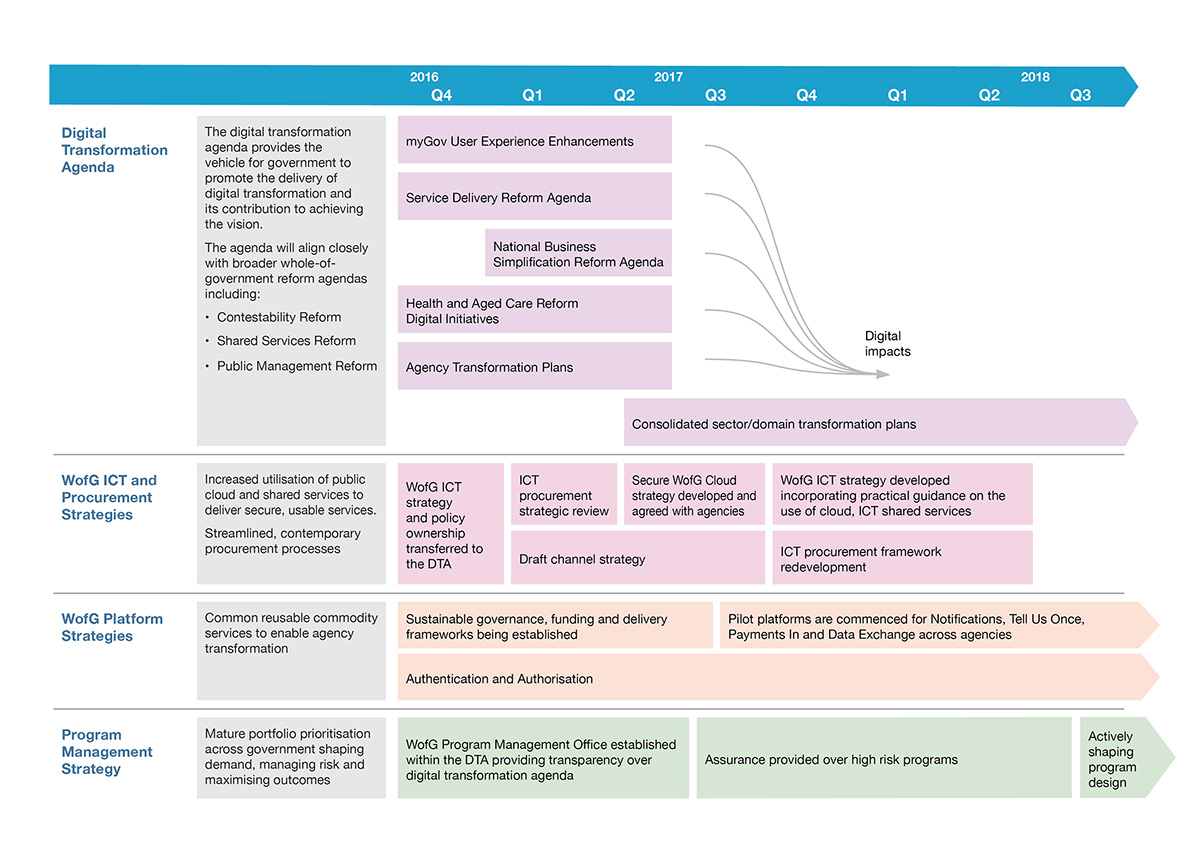 Some of the milestones are already behind, with a tangible outcome:

Yet, there’s a lot of work in progress and to be done in the future in terms of transforming government procurement interactions.

For more details about services in delivery, view this project list. 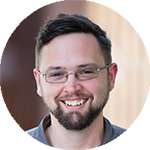 Lindsay Holmwood is a long-time contributor to the open-source and DevOps communities. Until recently, he was Head of Development at the Australian Government’s Digital Transformation Agency. Mr. Holmwood authored such projects as cucumber-nagios, Visage, and Flapjack and has run the Sydney DevOps meetup for the past six years. Lindsay speaks internationally about both the cultural and technical side of DevOps, covering Just Culture, complexity, cognitive biases, and monitoring tools. He also won third place at the 1996 Sydney Royal Easter Show LEGO building competition.