by Carlo GutierrezMarch 16, 2016
OpenStack Magnum claims to bring the best of containers and infrastructure together. This post compares three container orchestration engines available with OpenStack Magnum: Docker Swarm, Kubernetes, and Apache Mesos.
Why read this?
FOR AN ARCHITECT

It's the age of open-source technologies and Cloud Foundry developers eagerly use the variety of them, OpenStack not being an exception. Within that ecosystem, OpenStack Magnum enables the use of containers and there is more than one path that can be taken.

Here, we present some options for those who may be deploying containers with OpenStack and face the choice between native Docker, Kubernetes, or Apache Mesos.

“In 2010, NASA and Rackspace got together as a collaboration and formed the idea of a new software called OpenStack that would allow you to create your own cloud—private or public—at any scale. Since then, we have OpenStack members now at over 27,000, across 167 countries, and over 500 different organizations,” said Rackspace’s during Container World 2016.

Now, five years later, we have OpenStack Magnum, which is the Containers-as-a-Service component for OpenStack. It essentially combines infrastructure software with container software and makes them work together. 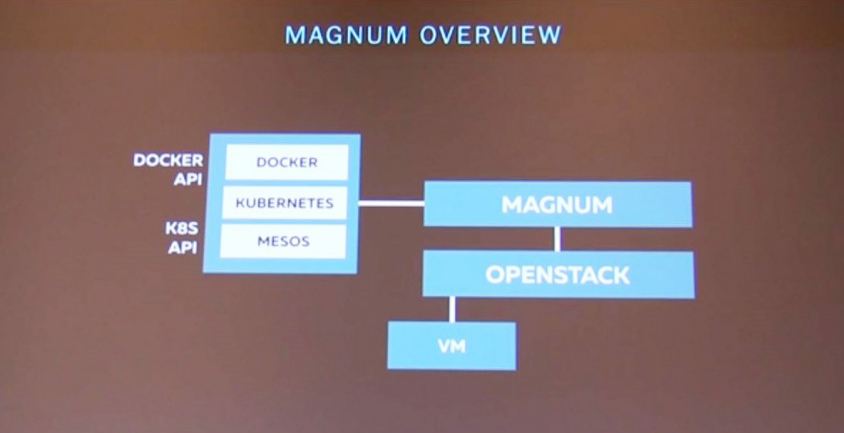 Why use OpenStack Magnum at all?

There’s an argument to be made about simply using any one of the COEs directly and ignoring OpenStack Magnum. Adrian poses the questions, “So why would you care about Magnum at all? Why don’t you just pick one of these COEs and run with it?”

OpenStack Magnum gives you four reasons to use it:

OpenStack Magnum addresses this problem through the automated TLS certificates. Normally, setting up a distributed system to be secured with the TSL certificates involves multiple configuration steps. 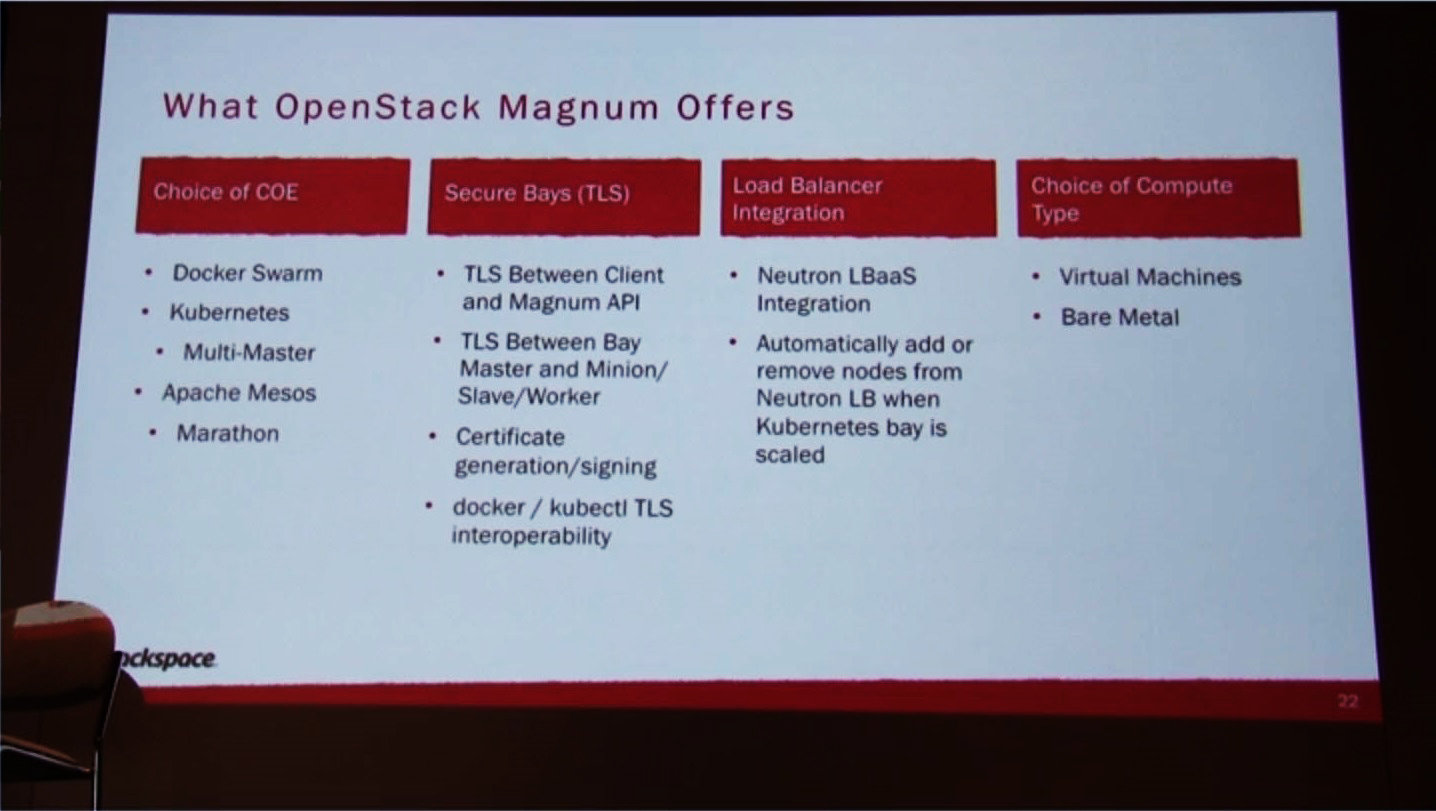 Before choosing which COE suits your needs, it’s important to note a fundamental difference in the approach of each container orchestration engine. Does the COE use an imperative design or does it use a declarative design? What’s the difference between the two? 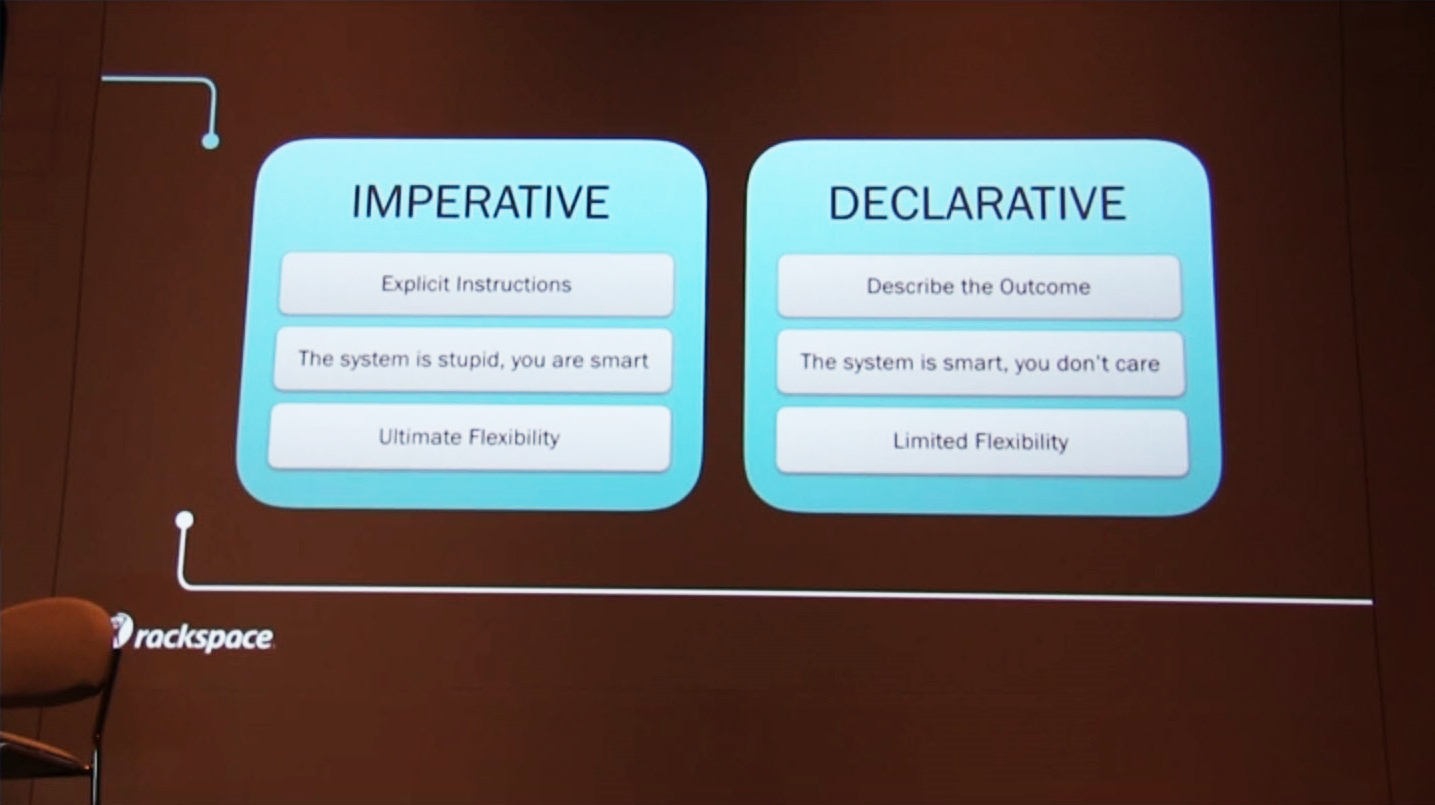 On the other hand, a declarative design means that the system is smart—it has all the functions—and the user simply enters a basic command. This system is easier to use but less flexible. “(In) a declarative system, all the smarts are in the system, and the actual input is a very simple statement of what you would like to happen. You have much less control in exactly what happens, but if the system is smart enough and it knows how to do exactly what you want, then this is a much better user experience,” adds Adrian.

With that cleared up, we return to the choice between three COEs supported by OpenStack Magnum: Docker Swarm, Kubernetes, and Apache Mesos. 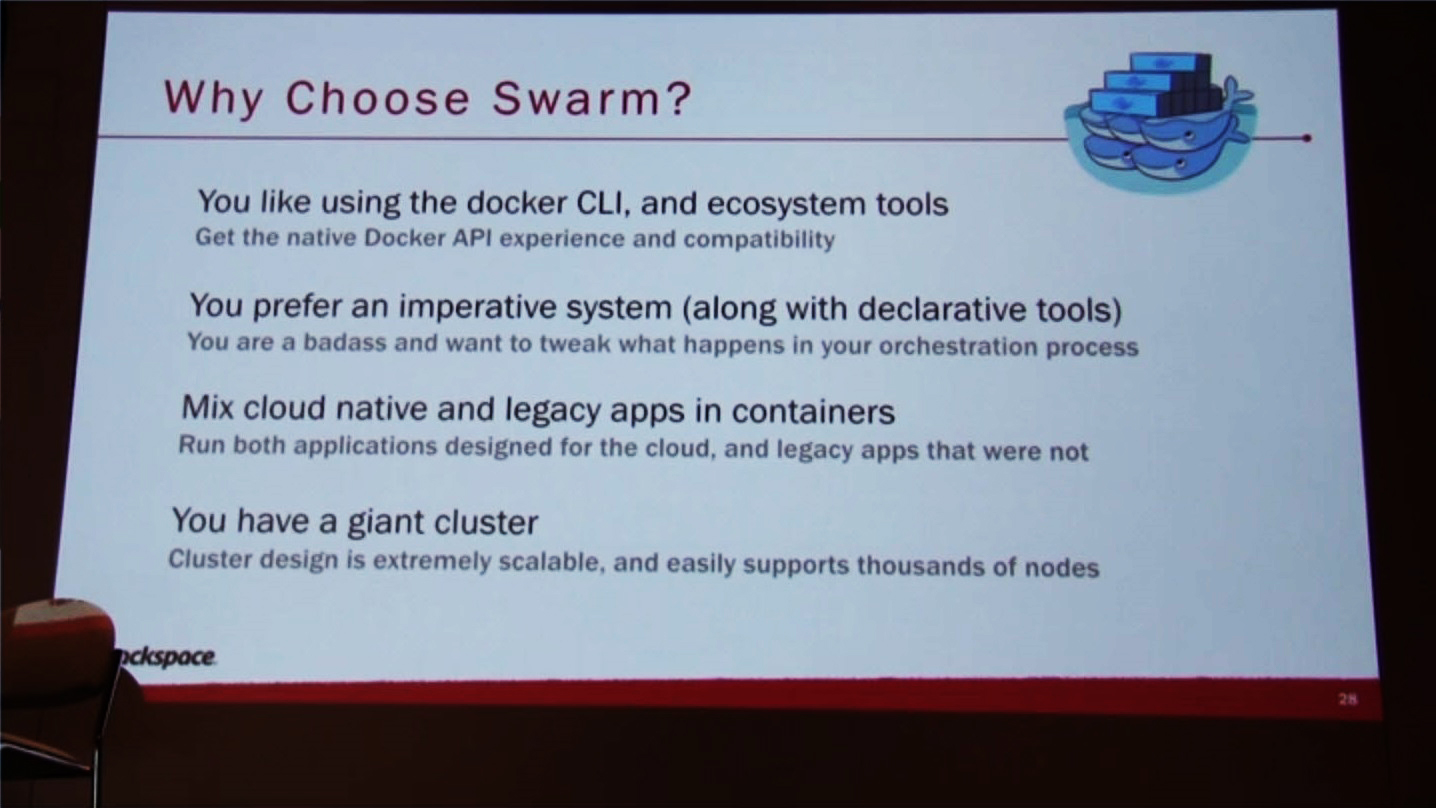 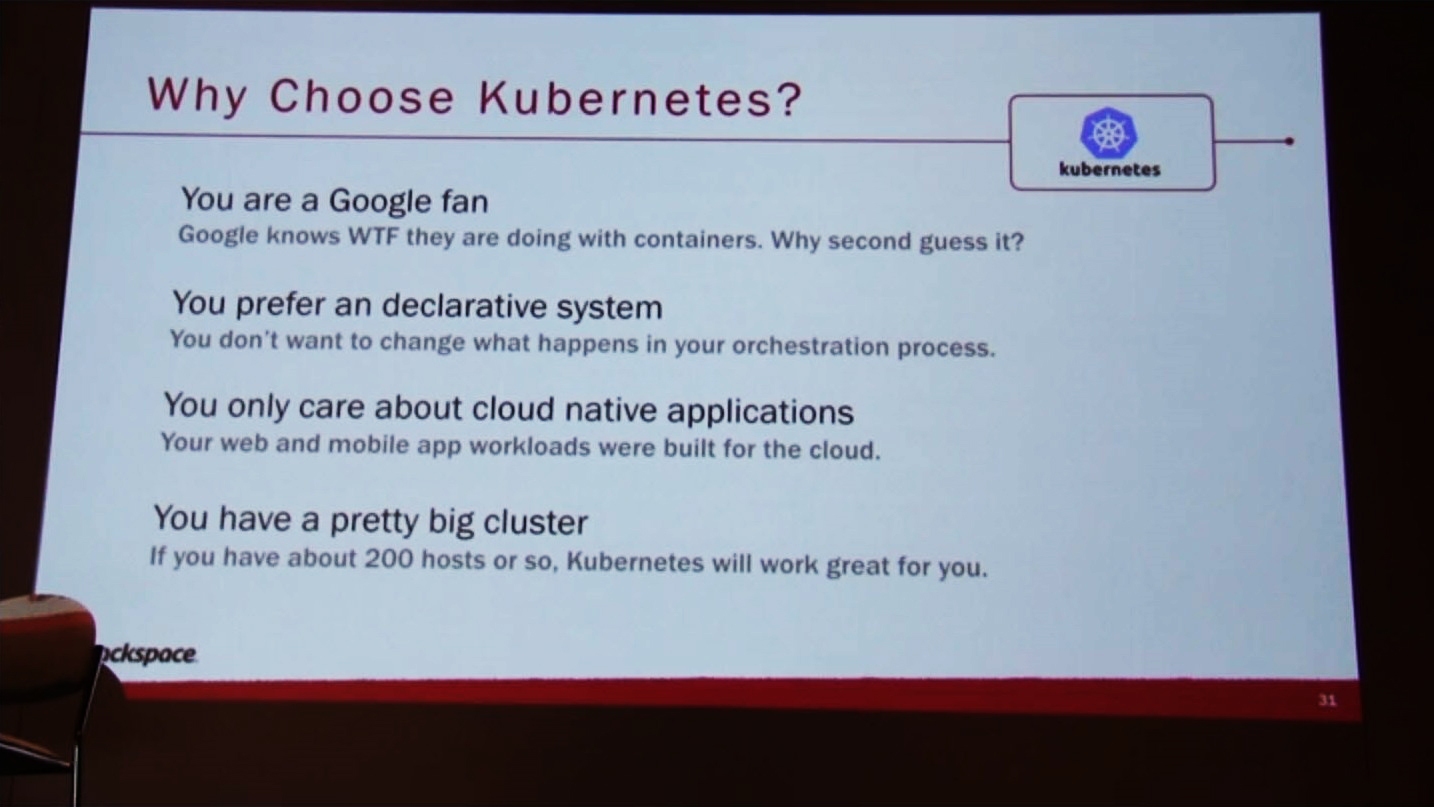 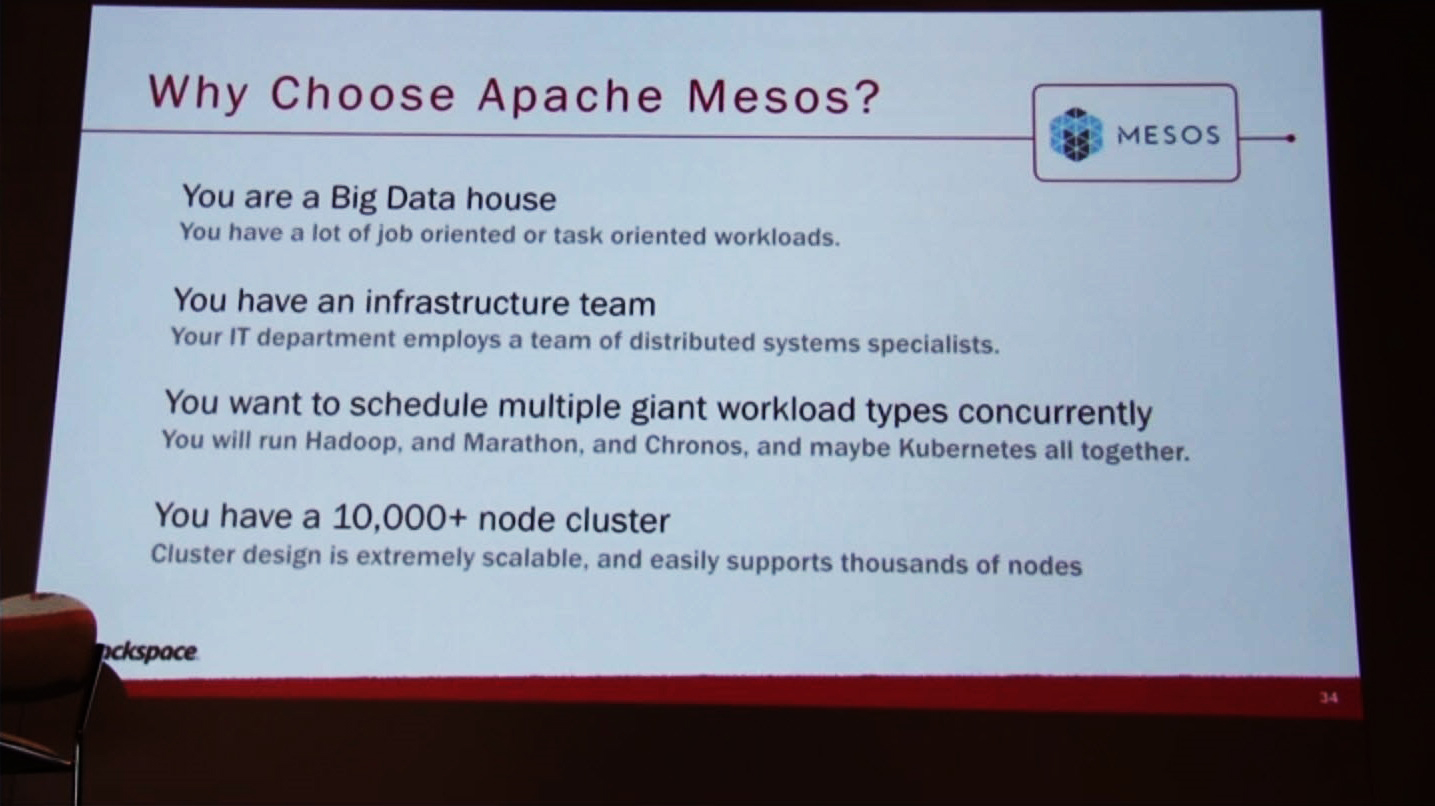 Obviously, choosing a COE goes far beyond the number of nodes and amount of data. You have to look at your own enterprise’s architecture and requirements and decide from there which fits. 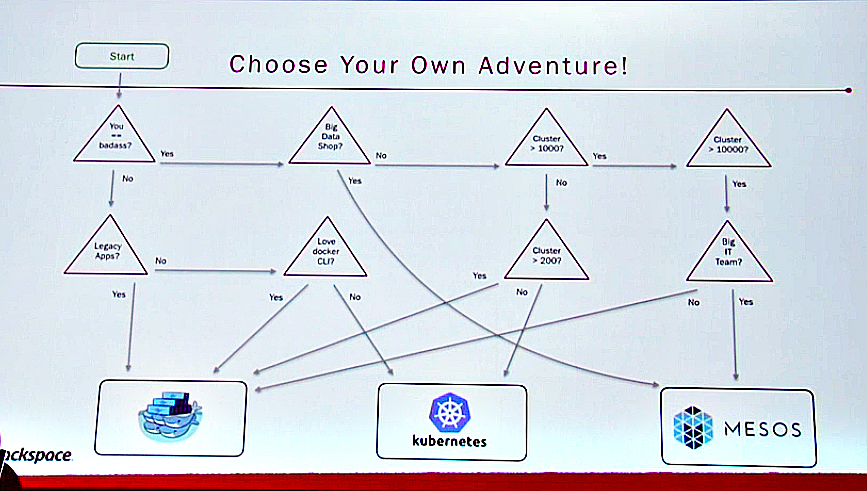 IBM Is Building an Enterprise Deployment for Blockchain
Next