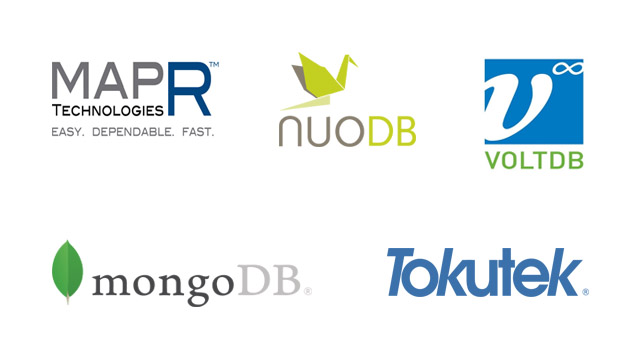 The highlights of NoSQL/NewSQL systems

Following our previous posts, we overviewed the latest performance results achieved by NoSQL/NewSQL vendors. Here is a list of updates over the past June 2013:

Below, you can find the details about the vendors’ updates mentioned above.

VoltDB 3.2: About one million transactions per sec with three nodes

VoltDB has revealed performance results for VoltDB 3.2. The team measured transaction per second vs. latency on a sample application. The post on their official blog demonstrates how to set up a cluster that can process about one million transactions per second with just three VoltDB nodes.

NuoDB has used DBT-2, an implementation of the TPC-C benchmark, to test its NewSQL system. The results published on the company’s official blog compare the number of new order transactions per minute against the number of warehouses based on NuoDB Transaction Engines. Take a look at the figures to evaluate NuoDB’s linear scalability.

TokuMX vs. MongoDB: Up to 60x better insertion performance

Tokutek, a database performance accelerator, has benchmarked how its TokuMX, “a performance-enhancing software,” increases the speed of MongoDB. The test demonstrates up to 60x improvement in insertion performance due to TokuMX’s patented Fractal Tree™ indexing. Previously, Tokutek announced 268x query performance increase and 532x faster multikey index insertion for MongoDB.

These were the most notable performance updates from NoSQL and NewSQL vendors in June 2013. Follow our blog for more.

The post was written by Andrei Paleyes and edited by Alex Khizhniak.