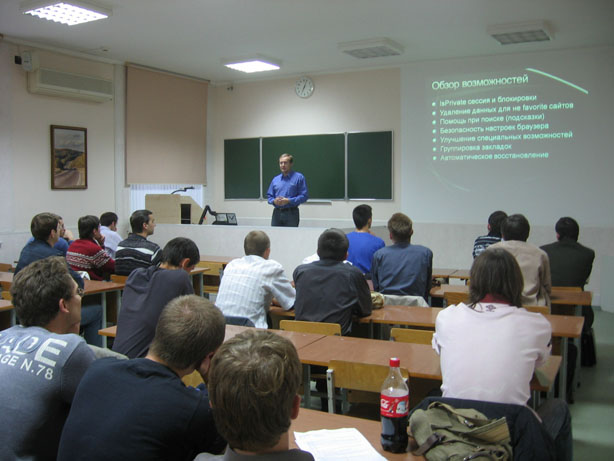 by Alex KhizhniakSeptember 11, 2008
At the event, the Internet Explorer 8 new functionality and capabilities were discussed, as well as the new features of Microsoft Office SharePoint Server 2007.

Brief summary of the event

Altoros Systems supported the latest Belarus .NET User Group meeting held on September 11, 2008. The meeting garnered the attendance of more people than ever before in the two-year history of the user group. Almost one hundred applications were received, and 64 developers took part in the conference. Sergiy Baydachnyy of Microsoft Ukraine delivered a technical review of the latest additions to Internet Explorer 8 (IE 8), after which Andrei Varanovich (Microsoft MVP) spoke on the key capacities of SharePoint 2007.

“Themed meetings, involving leading software development companies, make it possible not only to learn the news of the IT industry, but also to get a glimpse of what the industry will be like tomorrow, as well as to make a contribution to forming it. I hope that the past meeting of Belarus .NET User Group was our first, but not last, step in this direction.” —Dr. Nikolay Susha, Rector of the Minsk Institute of Management

The event kicked off at 6:45 p.m. with Sergiy Baydachnyy covering the new functionality in Internet Explorer 8 and the opportunities it provides for .NET developers. Mr. Baydachnyy also elaborated on the compatibility of IE8 with the latest standards and spoke about the Accelerator feature, which allows users to perform various activities with text extracts (e.g., translate, search, or mail them) without leaving the current page. To wrap up the event, Sergiy Baydachnyy answered a number of questions about Microsoft, developer certification, and the future plans the company has regarding Belarus.

Andrei Varanovich, who was supposed to speak about the new capabilities of Microsoft Office SharePoint Server 2007 (MOSS 2007), quickly discovered that his listeners were particularly interested in Microsoft Team Foundation Server. When his talk touched on this topic, the audience flooded him with questions and the conversation moved on to this product entirely (making it one of the possible topics for future conferences). Mr. Varanovich was able to direct the discussion back to MOSS 2007 and its new features, such as Enterprise Content Management and Enterprise Search, and the benefits of the latter for ASP.NET developers.

Each presentation lasted for roughly an hour and a half, with a 15-minute break in between, during which Sergiy Baydachnyy and Andrei Varanovich answered numerous questions, while sipping tea and coffee.

“It was great to hear positive reviews of the meeting. We are glad that a lot of participants were able to get their questions answered and found communication with the speakers so useful. We would like to thank the Minsk Institute of Management for the excellent organization and to personally thank Alexander Gedranovich, Deputy Holder of the Chair of IT and Higher Mathematics, for his active involvement.” —Alex Khizhnyak, press coordinator of the event

The meeting finished at 10 p.m., after Sergiy Baydachnyy reminded the audience that he was about to be late for his plane.

Can Japan Win Over COVID-19 with Technology, Automation, and Telemedicine?
Read More
346

Enterprise Mashups Enter the Scene
Next