by Roger StrukhoffJuly 7, 2016
We may be arguing when comparing blockchain technologies such as Hyperledger and Ethereum. The larger question is, "what are we trying to achieve?"

A matter of perspective

This seems to be the overriding lesson learned from a recent Hyperledger/Ethereum meetup held in London. Anthony O’Dowd, Solution Architect at IBM, and Nick Johnson, Ethereum Developer at Arachnid Labs, gave attendees their own relative perspectives of the two blockchain technologies during a panel discussion.

However, what also emerged were perspectives from adopters’ points of view, in which there’s a distinction between looking at blockchain as a peer-to-peer technology (P2P) versus viewing it as a business-to-business (B2B) solution. 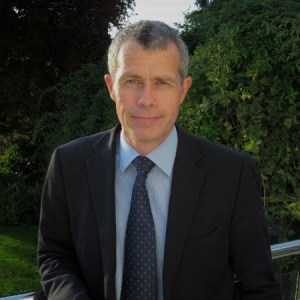 Anthony spoke of Hyperledger’s utility in creating the so-called private blockchains, to be used by approved companies and individuals, in a trusted network. Long, logistical supply chains come to mind. New efficiencies and security levels are the orders of the day here.

Meanwhile, Anthony reinforced the notion of the Ethereum culture focused on “trustless” networks used by any individuals interested in trading, say, cryptocurrency. Disruption and disintermediating (or transcending) third parties are the orders of the day here.

Thus, some clarity may be emerging from ongoing discussions all over the world about blockchain and whether Hyperledger and Ethereum are competitive, complementary, or something in between. I can see a logical distinction between the so-called private and public blockchain, similar to a distinction between “intranet and Internet” drawn by Anthony at the London meetup.

Anthony gave a formal presentation prior to the panel discussion, noting that the “promising, transformative” potential of blockchain will be reached “only by broad adoption.”

He further noted that IBM supports Hyperledger’s open-source community—Hyperledger is a project being managed by the Linux Foundation, and is based on IBM’s Open Blockchain technology. He also lauded Hyperledger’s use of “smart contracts that describe the rules of the game and who can do what” as a key to any future success it will have.

But firstly he showed the different potential participants on a blockchain network, taking car leasing as an example. 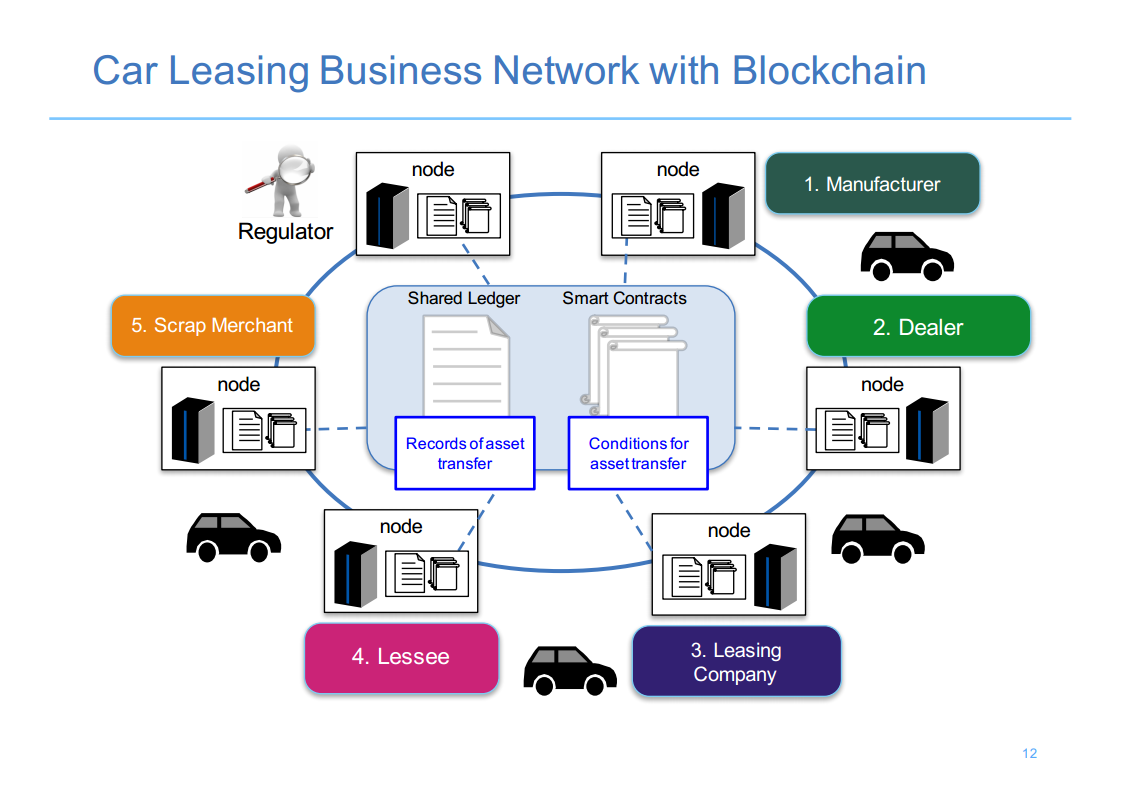 This would be a closed, “trusted” network in which each participant knows of the existence of the others. 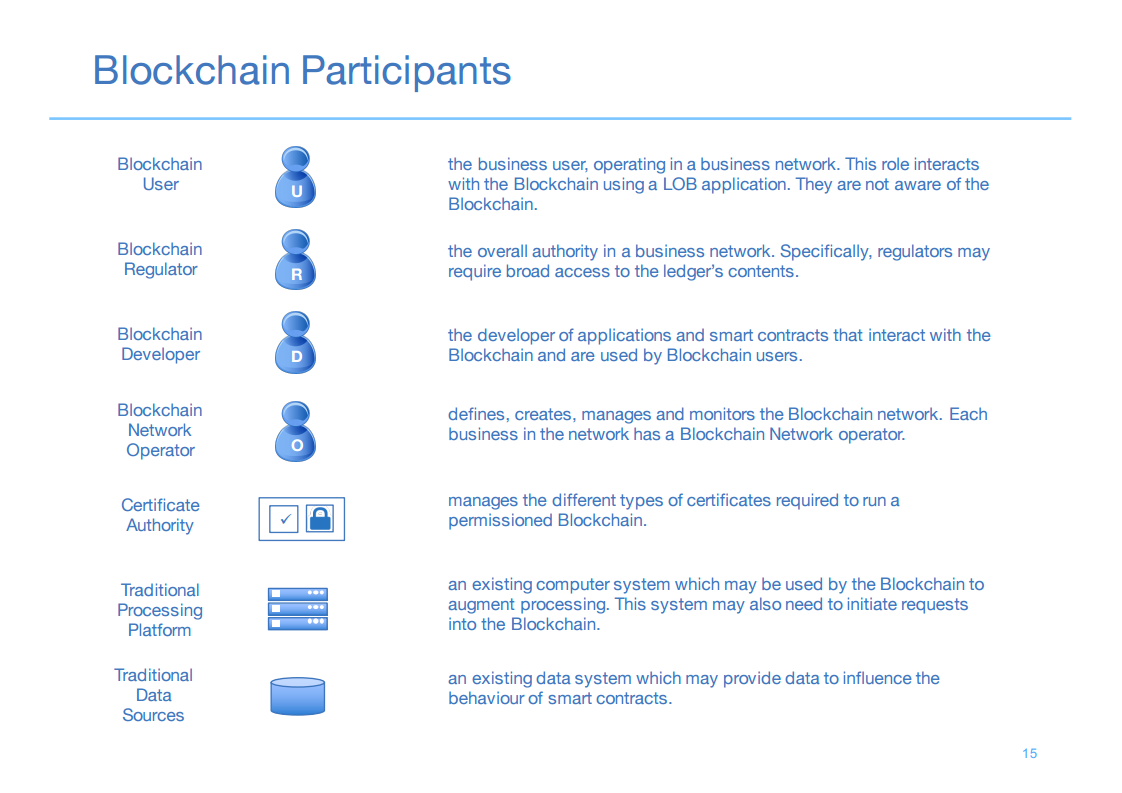 Components in such a network would include the following: 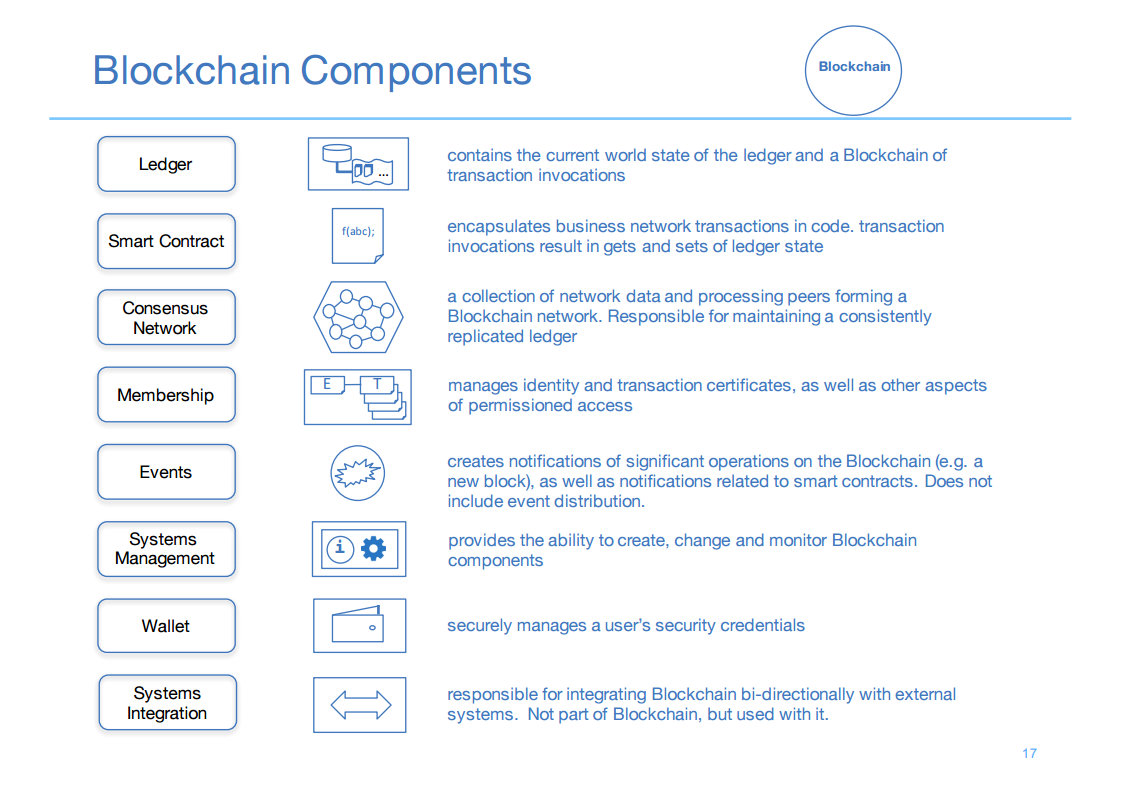 Anthony then diagrammed how an application interacts with the blockchain ledger: 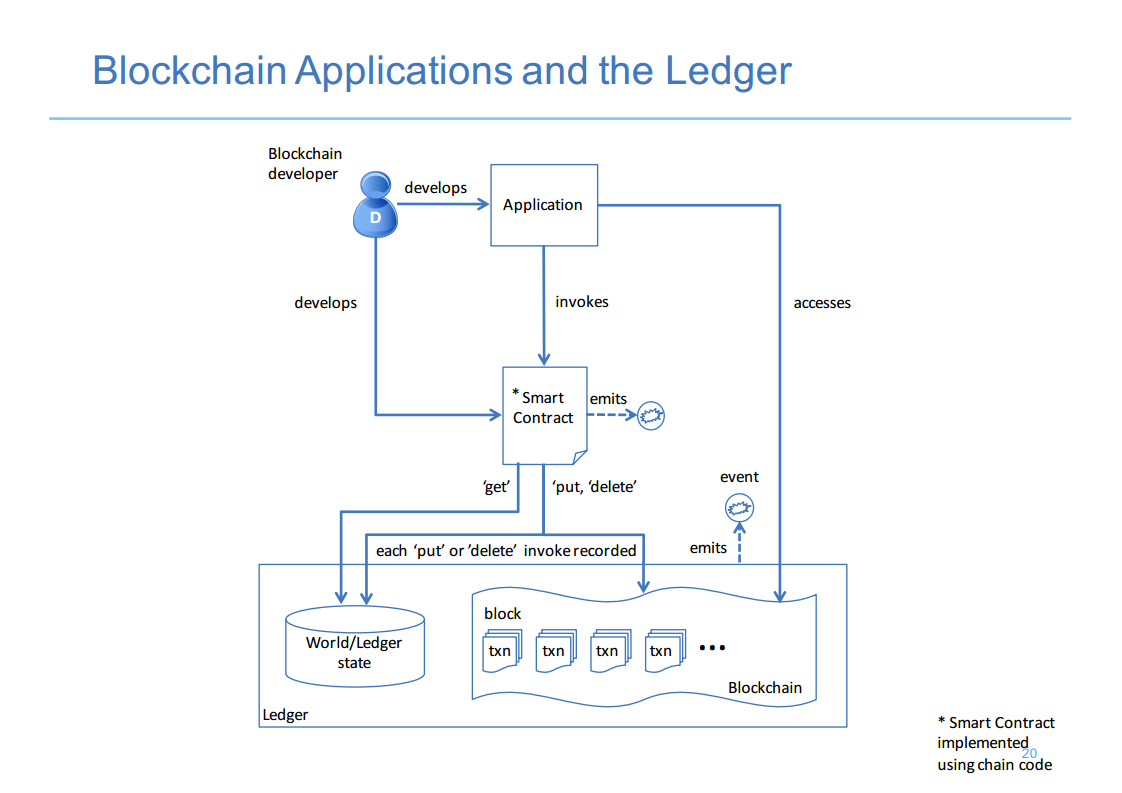 The need for a consistent ledger (of which everyone has a copy) was illustrated quite simply: 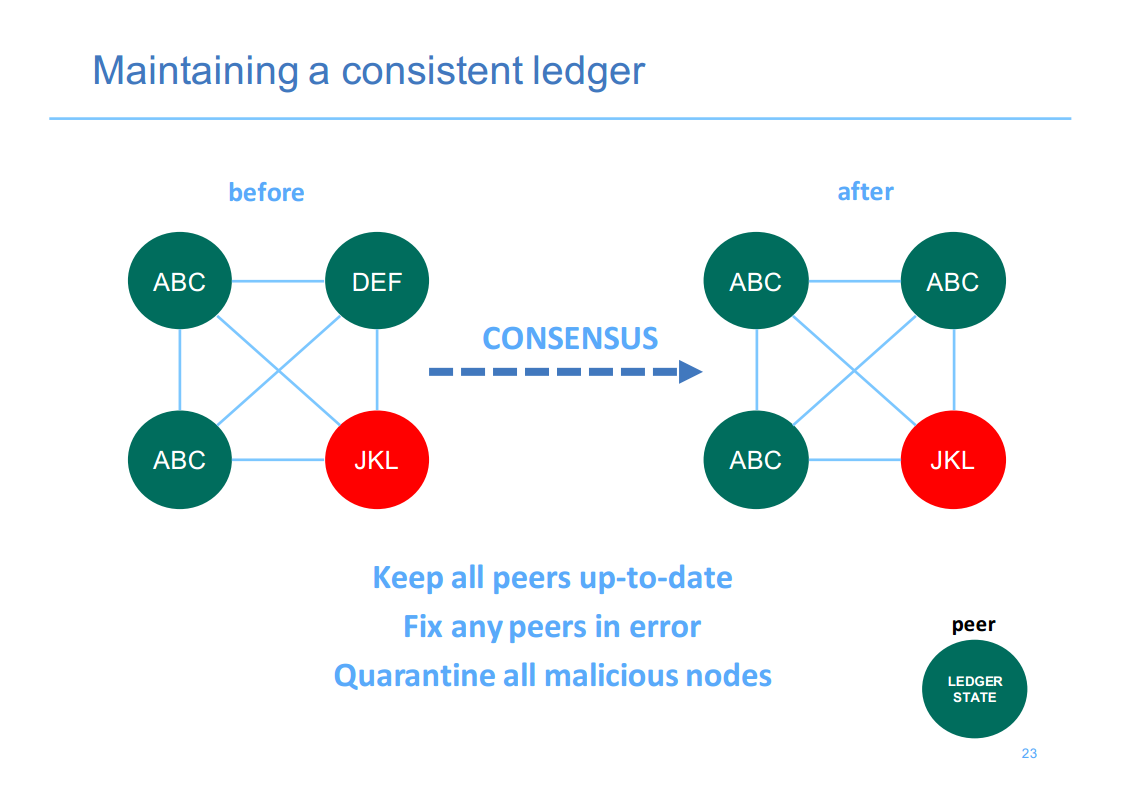 This was followed by a basic flow diagram of consensus on the network for the invocation of a single smart contract: 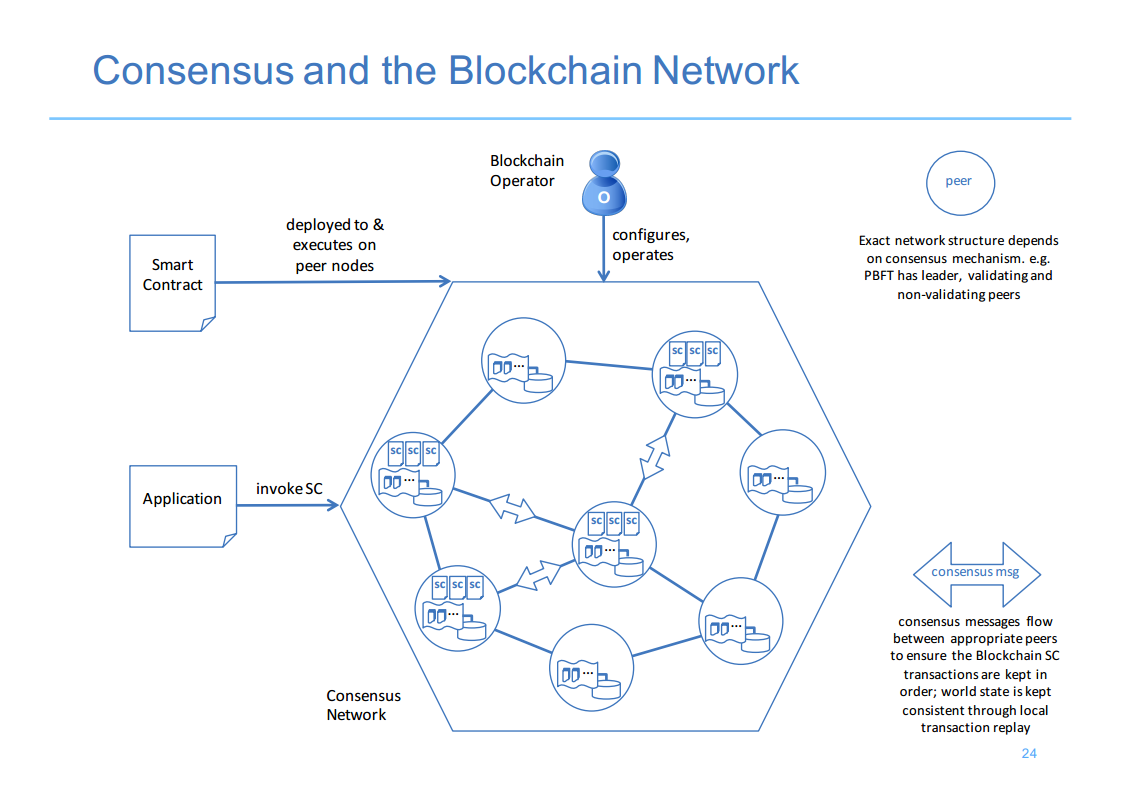 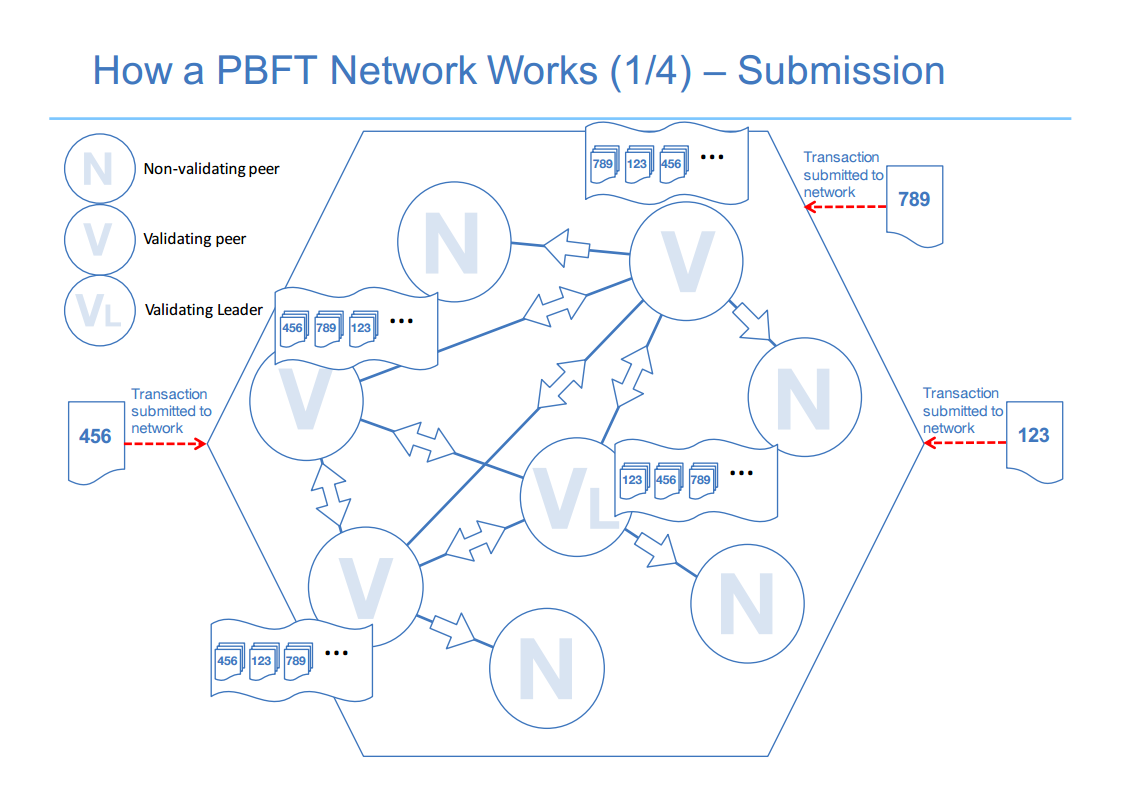 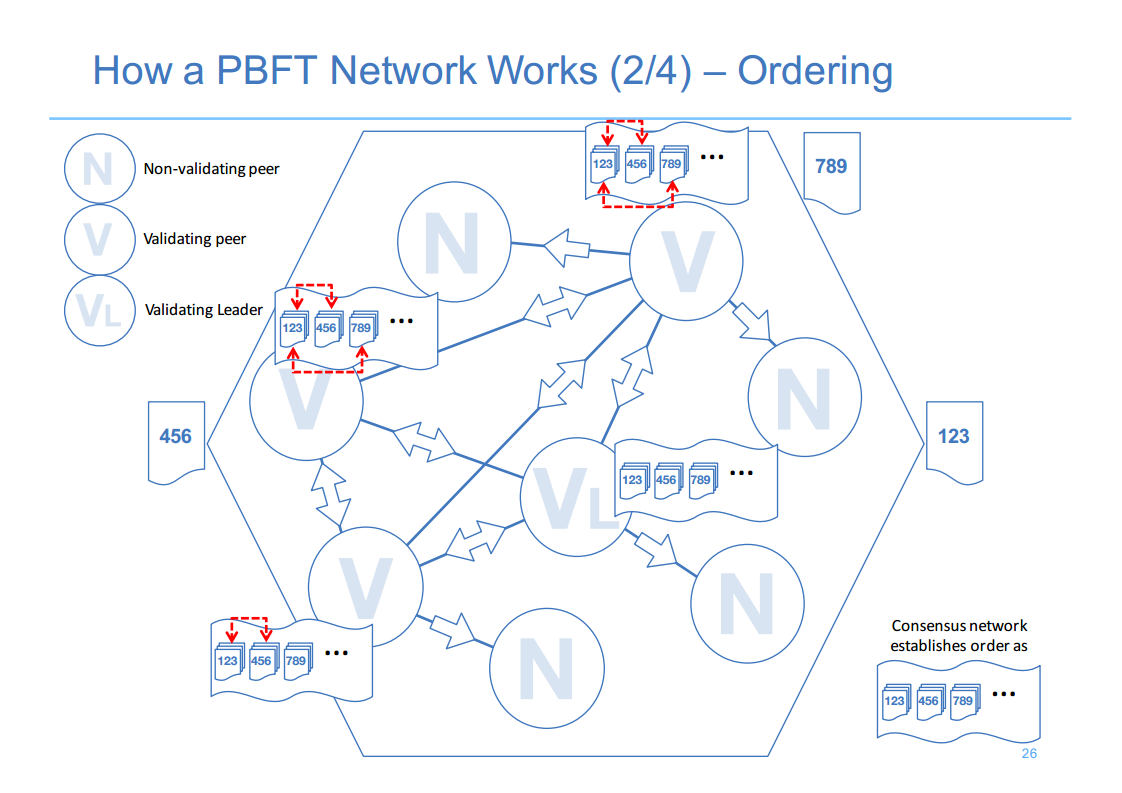 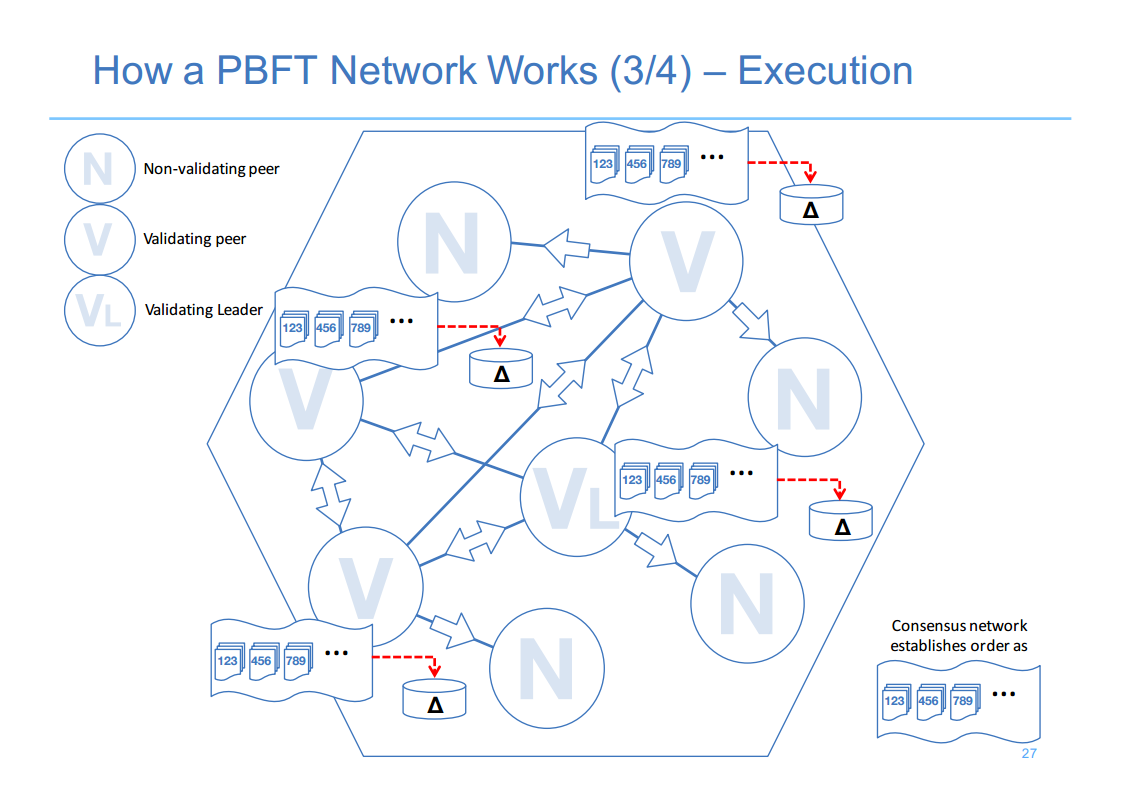 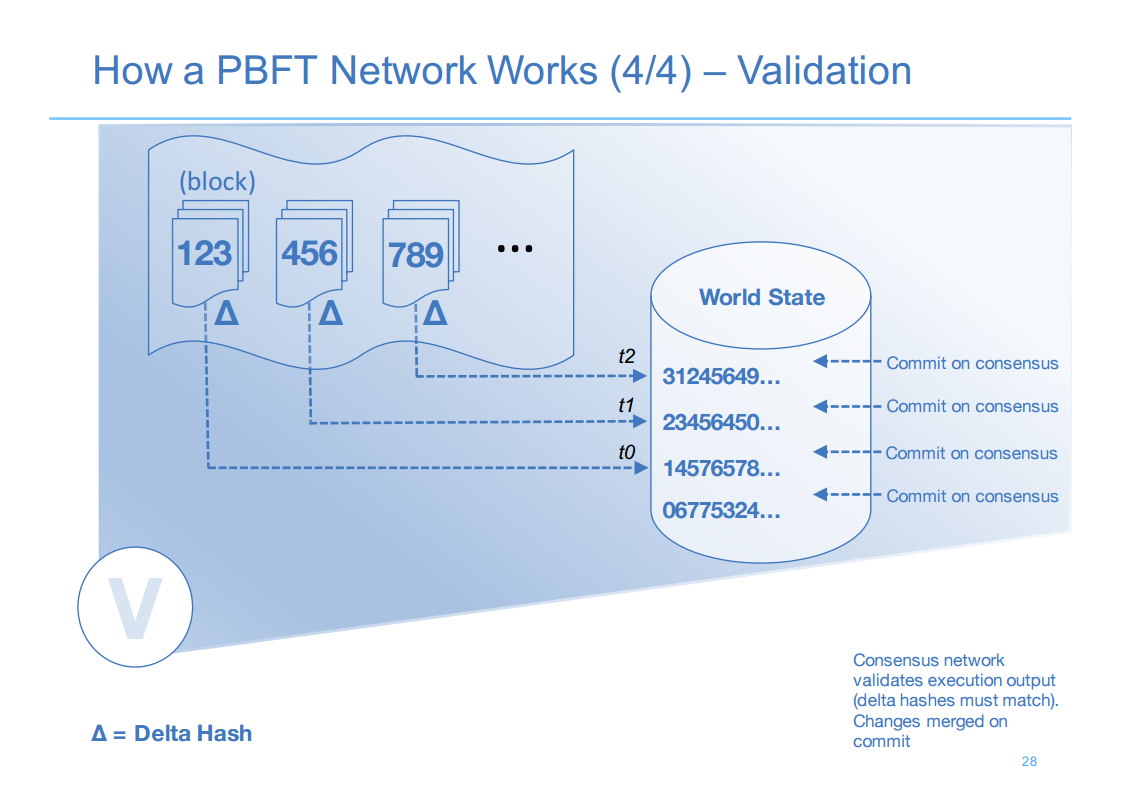 He followed that with a diagram that outlined permission ledger access: 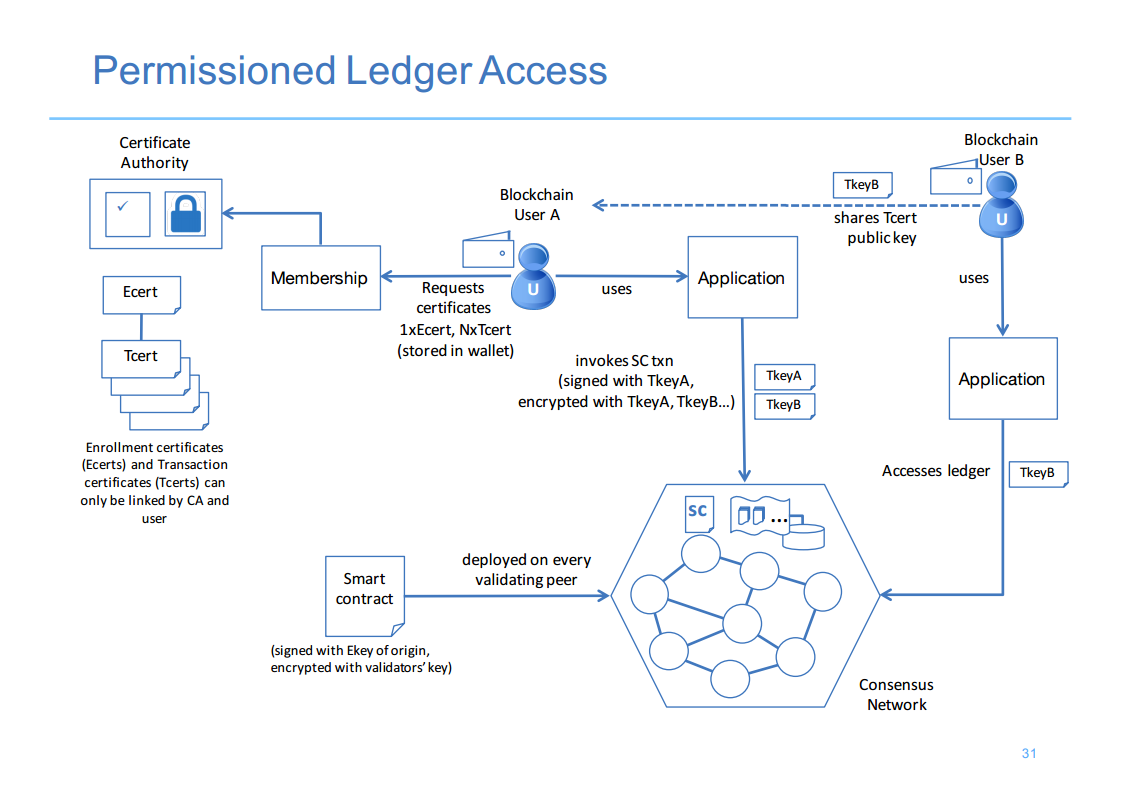 (Check out his another presentation on what difference blockchain makes for a business.)>

Anthony was careful to point out that smart contracts are “invoked,” and not “executed.” A transactions’s execution must first achieve consensus that it belongs and then be validated before its execution transpires. He also made the key point that “you don’t ship around all the data on the blockchain, you ship around the transaction information.” A transaction certificate can be thought of as a “one-time use credit card number,” he said. “It’s a digital certificate and you can generate as many as you need.”

In summary, this perspective is “all about transferring assets in a business network,” he said.

Ethereum: a time for “trustlessness”?

This is something quite different than a peer-to-peer bitcoin network, a “trustless” network where potentially none of the players know one another. Nick Johnson noted that Ethereum’s trustless nature is also open, widely distributed, and “designed for transparency in transactions.” According to Nick, it has been built to excel in applications such as bitcoin and other cryptocurrency, name registries, foreign exchange, and a variety of governance apps.

The proof-of-work required to validate transactions means that Ethereum’s core—its Ethereum Virtual Machine (EVM) implements a “very deterministic” charging for resources. “Every validator gets the same answer as far as how many resources are consumed, and you can rely on the fact that no one can attack you by executing unduly expensive transactions.” Thus, trust is built into the trustless network.

“The biggest contribution people can make now is to learn about smart contracts and create something really cool.” —Nick Johnson, Ethereum Foundation

This leads to the question I pose in this article’s subhead: are we talking past one another with Hyperledger “versus” Ethereum conversations? Shouldn’t we define exactly what we want to do first? This London meetup seems to indicate we should.

The event ended with another fireside, called “Requirements and Adoption Bottlenecks for Blockchain in Healthcare and Insurance” (starting from 36:00).

A Hyperledger overview by Anthony: 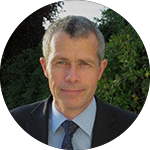 Anthony O’Dowd currently works in IBM’s Worldwide Blockchain Labs helping clients with solution architecture and application design for decentralised ledger systems. He has hands on design experience with Linux Foundation Hyperledger project and other open source blockchain technologies. He has a strong background in middle and back office technologies, playing key roles in the development of IBM MQ and Integration Bus software offerings on mainframe and distributed platforms. Anthony has a keen interest in the economics of IT. 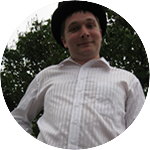 Nick Johnson is a Software Engineer with a broad experience base, living in London, UK. He has worked in traditional software engineering roles, in oncall / production support, and in a customer facing developer advocacy role. He has experience debugging code, solving production issues on a deadline, giving a talk at a tech conference, or helping other developers on Stack Overflow. As a coder, he is language-agnostic and excels in becoming proficient in a new language or technology quickly.
The post is written by Roger Strukhoff and edited by Alex Khizhniak.