by Carlo GutierrezAugust 15, 2019
The new framework is designed for comparative performance testing of different blockchain solutions with predefined use cases.

The need for a standard

Performance tests are essential for gathering and measuring metrics of any application. When it comes to blockchain, there are quite a few benchmarking tools that already exist, such as BlockBench and Performance Traffic Engine, but most of these provide limited support.

This lack of a standard benchmark solution for blockchain applications is the problem Caliper, a Hyperledger incubation project, is trying to resolve. The tool was initially contributed by developers from Huawei, Hyperchain, Oracle, Bitwise, Soramitsu, IBM, and the Budapest University of Technology and Economics.

According to Nick Lincoln of IBM, who provided an overview of Caliper at the Consensus 2019 conference this May, the framework is fit for comparative testing of blockchain offerings out there.

One of the primary goals of Caliper is to provide performance results that can be used by other Hyperledger projects, as well as non-ecosystem ones, as reference points when implementing blockchain solutions. The project was initially developed by Huawei and was proposed to Hyperledger early in 2018. It was later accepted and placed into incubation on March 15, 2018.

Based on its documentation, Caliper is ideal for: 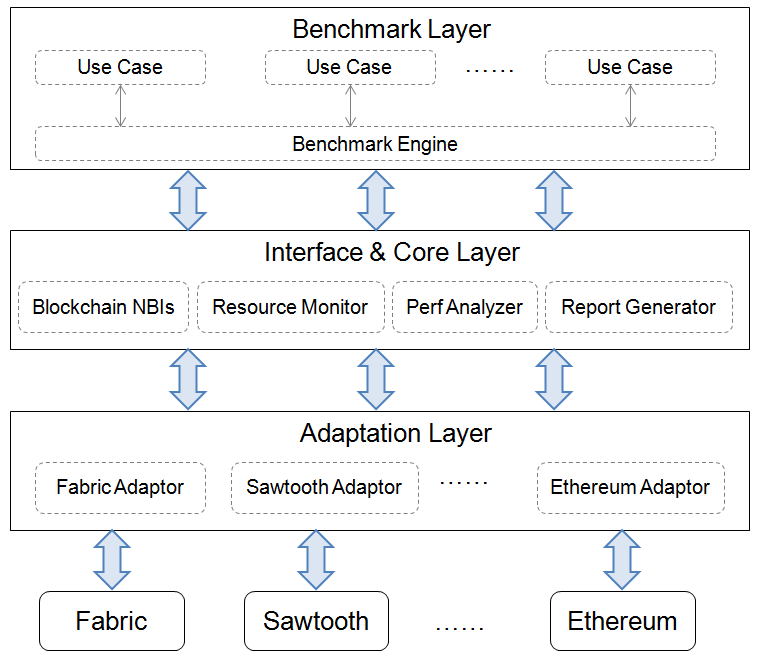 “We have an open pull request for an Ethereum adaptor. Additionally, Sawtooth itself contains an EVM, which means you can run Ethereum inside Sawtooth. We have have adaptors for all the Hyperledger components. We have an interface that you can follow to provide your own adaptor for any other system. We also give you a CLI package for convenience in running benchmarks. We’re trying to make it as easy as possible to test different blockchain systems and get some performance metrics out of them.”
—Nick Lincoln, IBM

To better understand how Caliper works, we can reference its benchmark architecture. Starting off, a user will have to define configuration files, which include: 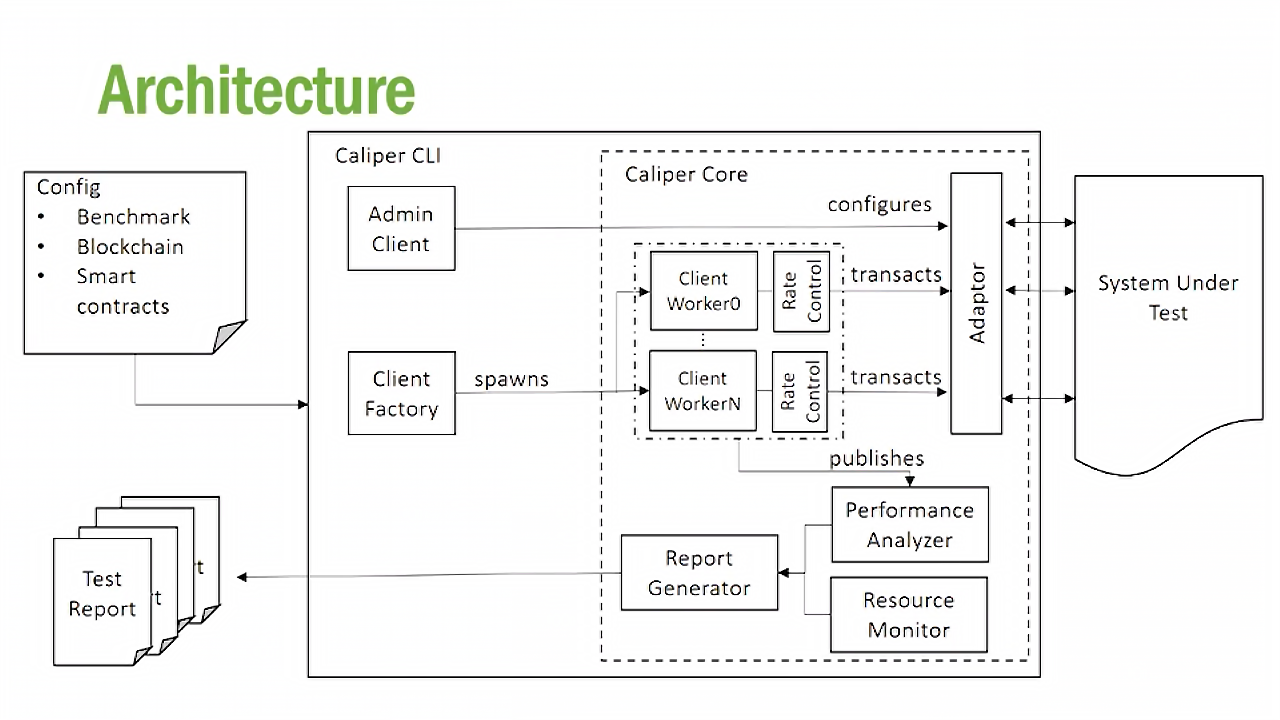 These configuration files are then fed to the Caliper CLI. This creates an admin client and a client factory. The admin client is considered the superuser.

On the other hand, the client factory creates clients responsible for running test loads. Depending on a benchmark file, the clients could be transacting with the system to add assets or to query. The clients also drive through a rate controller, which dictates the rate of transactions per second (TPS).

During a test, all transactions are saved. The statistics of these transactions are recorded and collated. In addition, a resource monitor also records the consumption of resources. All of this data is pooled together into a single report.

An example of a Hyperledger Caliper report (Image credit)

“There’s quite a simple flow throughout where we take the configuration files, pass them into Caliper, and we set up the system. The clients are driving it, collecting all of this information, and publishing a report.” —Nick Lincoln, IBM

The roadmap for Caliper

Caliper is still in the incubation stage of the Hyperledger Project—it is currently in the beta phase of development. Some of the milestones for a release candidate include creating adaptors for Corda, Quorom, and Ethereum, as well as designing enhanced use cases and metrics. The release candidate is expected to be delivered this fall. 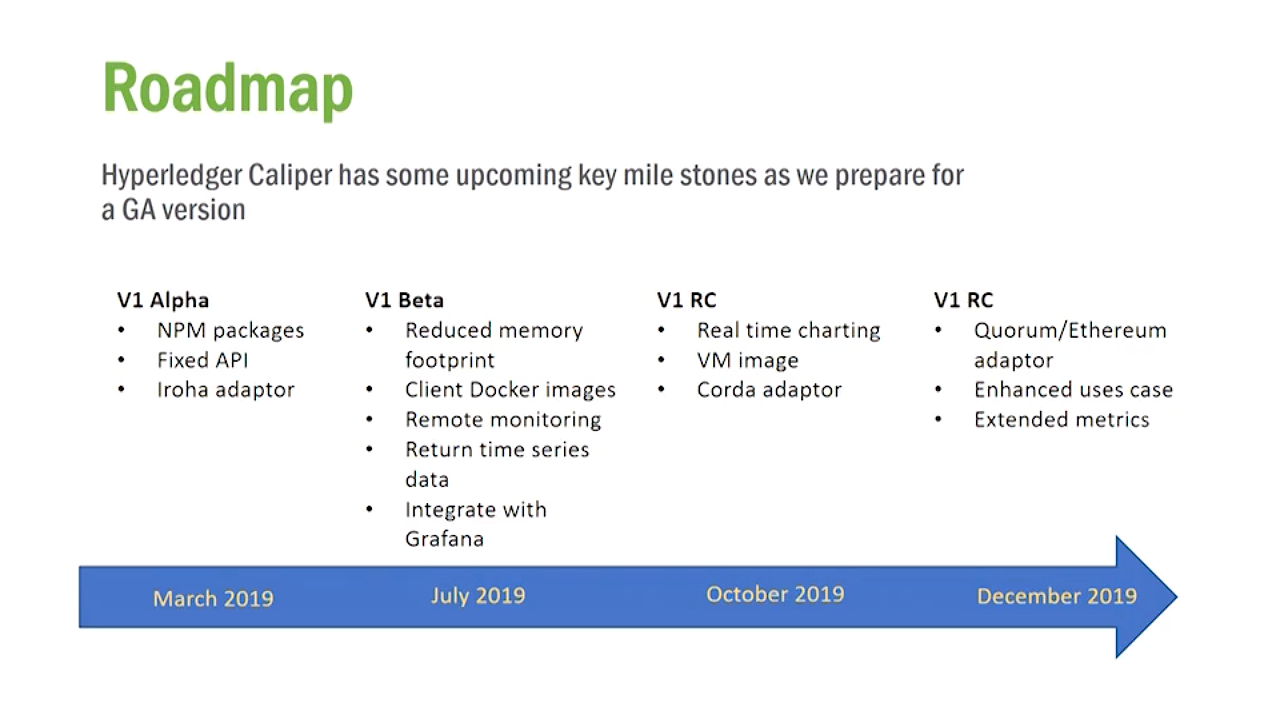 Caliper’s development can be tracked in its GitHub repository. Anyone looking to contribute can join the Hyperledger mailing list, as well as the chat channel. There is also a regular community call every Wednesday at 9 a.m. (UTC).

In this video, Nick Lincoln of IBM provides an overview of Caliper, describing the project’s architecture and explaining how it works.

You can also read about other Hyperledger projects:

Nick Lincoln is Blockchain Developer at IBM. He is a highly motivated and driven individual with an academic background following a first-class masters degree in aerospace engineering and a PhD in autonomous spacecraft systems. Nick is also a prolific inventor, having filed 26 patents to protect intellectual property during a relatively short time at IBM in areas including augmented reality, cloud computing, the Internet of Things, mobile, and user experience.
The post was written by Carlo Gutierrez, edited by Sophia Turol and Alex Khizhniak.

Optimizing the Performance of Apache Spark Queries
Next

Consensus in Hyperledger Fabric: Migrating from Kafka to Raft