Deploying a Rails 5 App with MongoDB, Redis, and CarrierWave to IBM Bluemix

by Nick Herman and Dzmitry BardziyanMarch 24, 2016
Learn how to add and configure services step by step via the CLI or the UI. 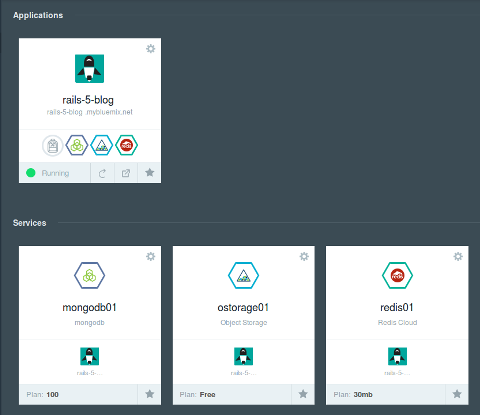 In this post, we show how to deploy a Rails 5 application with MongoDB as a database and CarrierWave for image processing to Bluemix. The source code for the article is available in this GitHub repo.

Please keep in mind one slight difference: in the article, credentials are set in a more explicit way with user-defined environment variables, while in the repository, they are fetched from the Cloud Foundry application auto-generated VCAP_SERVICES variable.

To follow the steps of this tutorial, you need:

Before deploying, you need to create services instances for your application. You can do it through the CLI or the UI. Note that a free MongoDB service hosted by Bluemix is not available in the UI. In addition, some configuration options have to be specified in the manifest.yml file.

Adding services through the CLI

The organization you intend to use and the space within it should be created in the Bluemix UI before you authenticate with cf login. They can have any names that you choose. 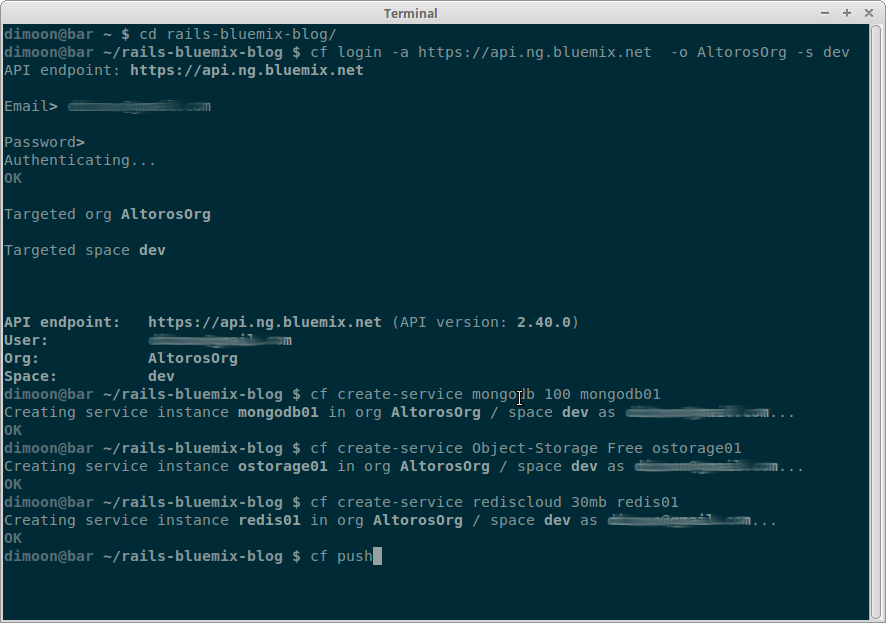 After creating a new service, you should bind it to your application as explained in the official Bluemix documentation. Alternatively, you can specify dependencies names in manifest.yml, and then cf push will do it for you.

To add a service from the command line, use cf create-service. Below, you will find its syntax.

First, we need to set up our MongoDB.

After that, configure the database connection in your config/mongoid.yml.

We will also need the Object Storage service and Redis.

If you store the Object Storage credentials in an environment variable as described above, your CarrierWave initializer should look similar to the one in this example. Note that you should choose the fog-openstack gem version 0.1.2 or later to use Bluemix Object Storage in your application.

As we use MongoDB instead of PostgreSQL, we have to provide ActionCable with Redis configuration. The following configuration file addresses this issue as shown below.

To use Object Storage, you need to create a container and set fog_directory to its name. You also need TEMP_URL_KEY—a random secret string—to generate public URLs for your images. To do so, run the following commands.

Adding services through the UI

Note that sometimes you can choose between different offerings for the same tool in the Bluemix services catalog. For example, you have two options for Redis: Redis Cloud and Redis by Compose. 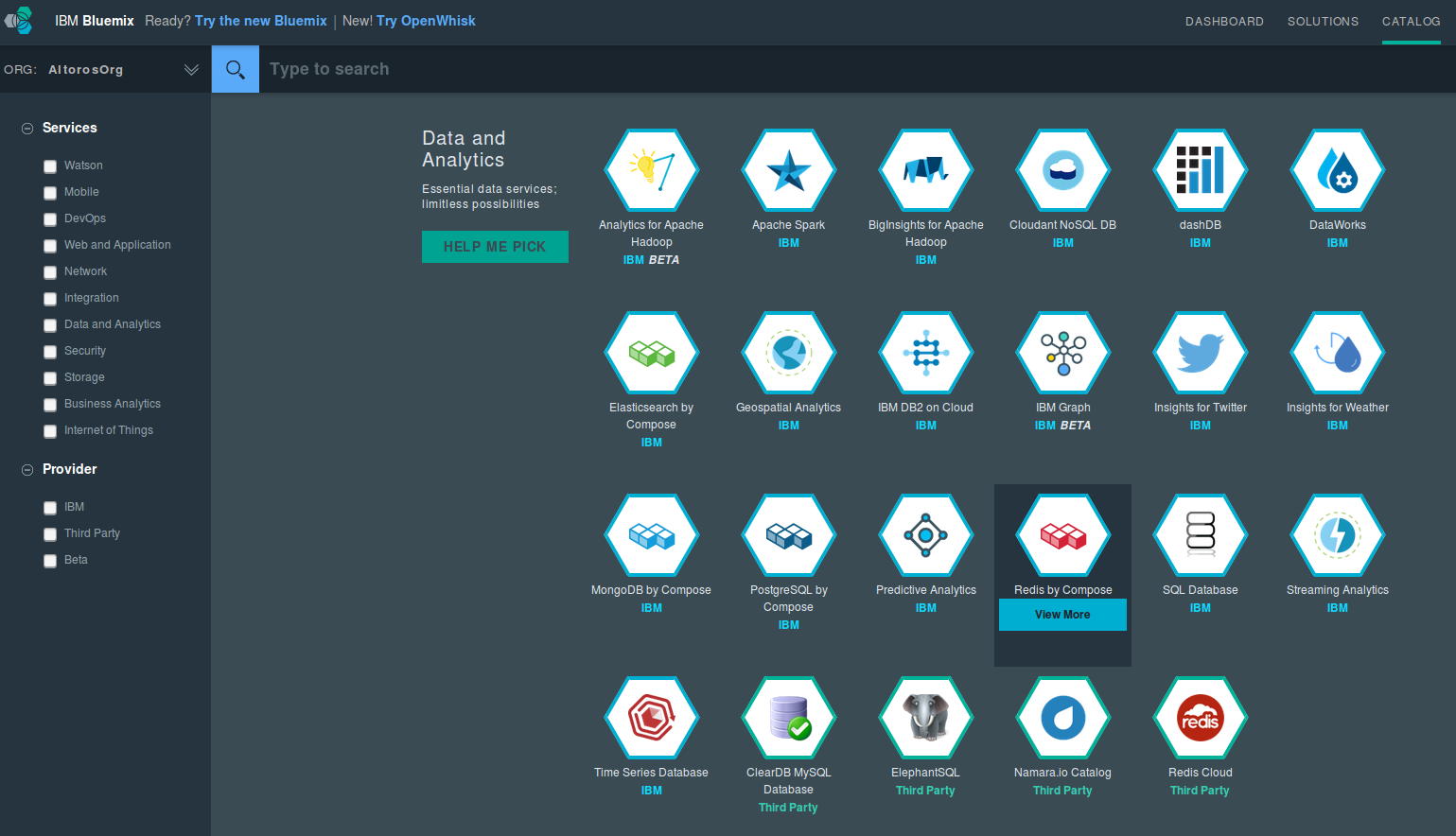 The last one gives you a configuration that is pretuned for high availability, includes additional security features, and also provides a number of metrics. The same is true for MongoDB. 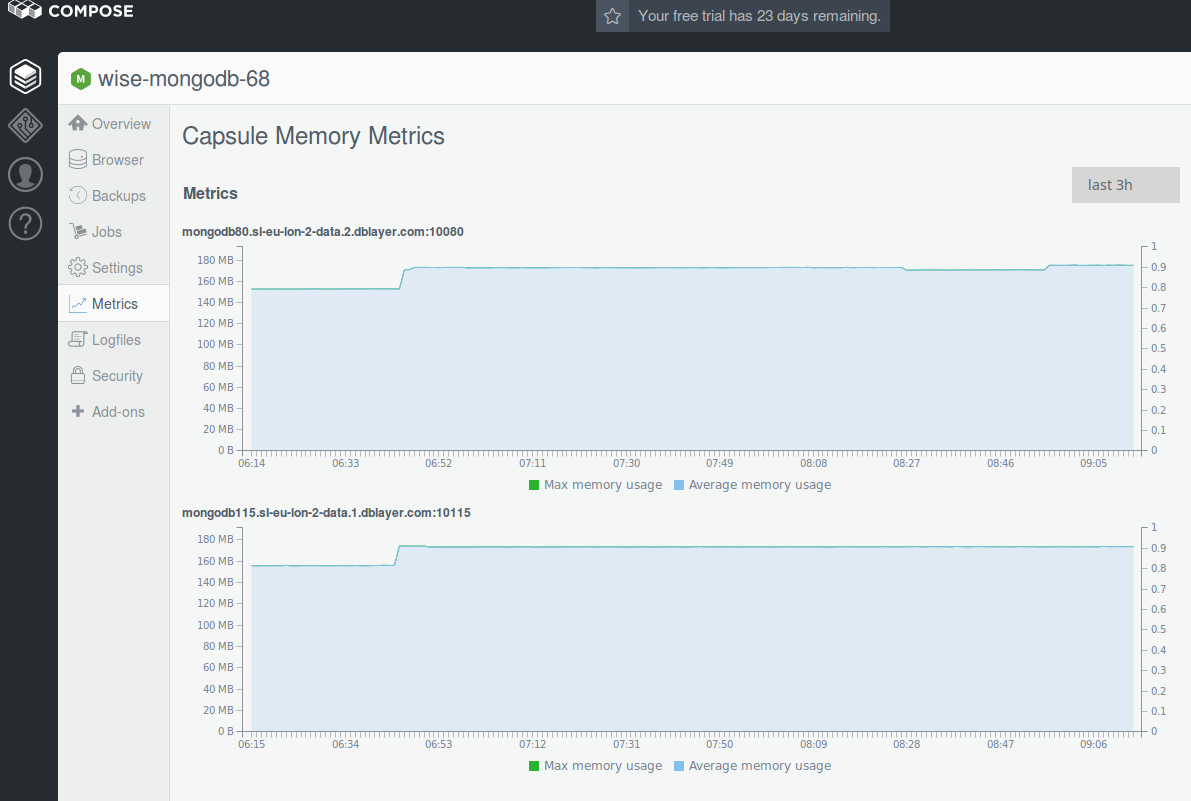 Below, you can also see an example of reading service credentials. 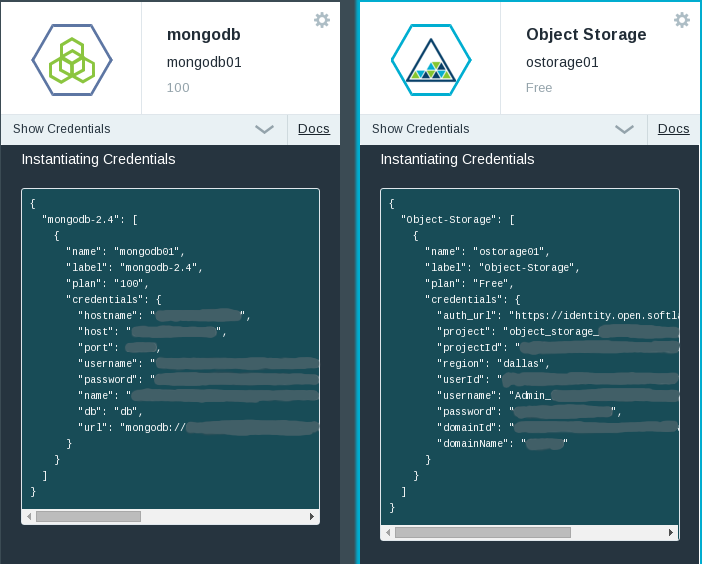 The manifest.yml file consists of two sections. The first section—declared-services—describes services that an application uses. Below, you will find this very section for the sample application.

The keys are the names of the services that are to be referenced later. The values specify the services labels and plans.

The second section—applications—describes the application itself. Here is this section for the sample application with the properties defined below.

To deploy, you can just go to your application directory and run cf push. (Of course, you need to use cf login for the first time.) For real-world applications, you might need something more powerful:

Build and deploy in Bluemix

When using the CLI, you will get the result as shown below. 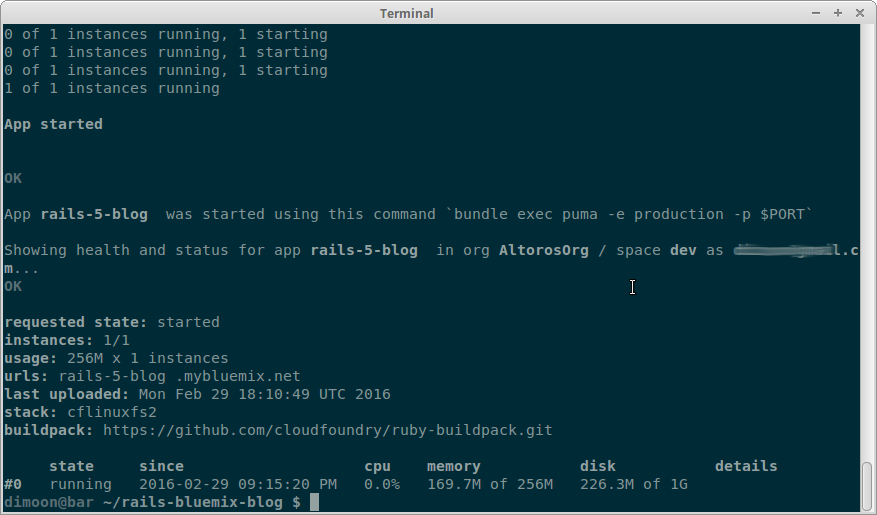 If you want to use background jobs in your Rails application, check out the official Cloud Foundry docs. Notice that your application needs to be deployed twice in this case.

Nick Herman is a software engineer at Altoros. He specializes in web development using Ruby and JavaScript as his primary tools. Nick also has professional interests and expertise in many other areas related to software engineering, including programming languages and cloud technologies.

Dzmitry Bardziyan is a Ruby and JavaScript developer at Altoros. He has solid knowledge of Rackspace, AWS, SoftLayer, vSphere, and other infrastructure solutions, as well as background in system administration. Dzmitry also contributes to a number of IT magazines.

Nick Herman is a software engineer at Altoros. He specializes in web development using Ruby and JavaScript as his primary tools. Nick also has professional interests and expertise in many other areas related to software engineering, including programming languages and cloud technologies. You can find him on GitHub.

How to Push an ASP.NET 5 Application to IBM Bluemix