by Roger Strukhoff and Carlo GutierrezMarch 15, 2017
Trade finance is losing billions through inefficient manual workflows and lack of transparency. Learn how blockchain drives digitization to save on expenses. 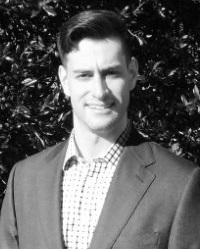 How to apply blockchain technology to transforming cross-border supply chain was the topic of a recent webinar delivered by Sloane Brakeville of IBM.

In particular, Sloane covered how the Hyperledger Fabric blockchain can be deployed within trade finance to place the letters of credit that are the lifeblood of the system onto a blockchain, “for increased speed, reduced errors, privacy, transparency, and a scalable ecosystem.”

Payment and delivery terms are documented in a letter of credit or open account contract vehicle, and the financial institutions receive fees for assuming risks, as well as for documentation and oversight of payment terms. About 80% of trade is supported by some sort of finance, Sloane said, with letters of credit facilitating 47% of global trade finance. This percentage adds up to $2.8 trillion per year worldwide.

Yet, they can be difficult to be approved for small and medium enterprises (SMEs). Sloane noted that more than half of SME applications are rejected, compared to only 7% for multinational companies. “Unmet demand for trade finance is $700 billion in Asia, and $120 billion in Africa, which represents one-third of all trade finance on the continent.”

The entire trade-finance and supply-chain system is quite complex, with many inefficiencies that can be streamlined. Sloane enumerated three root causes that underlie data challenges in the shipping industry as seen by IBM:

The above-mentioned inefficiencies result in error-prone or incomplete/inconsistent information, border delays, and lack of shipment visibility. 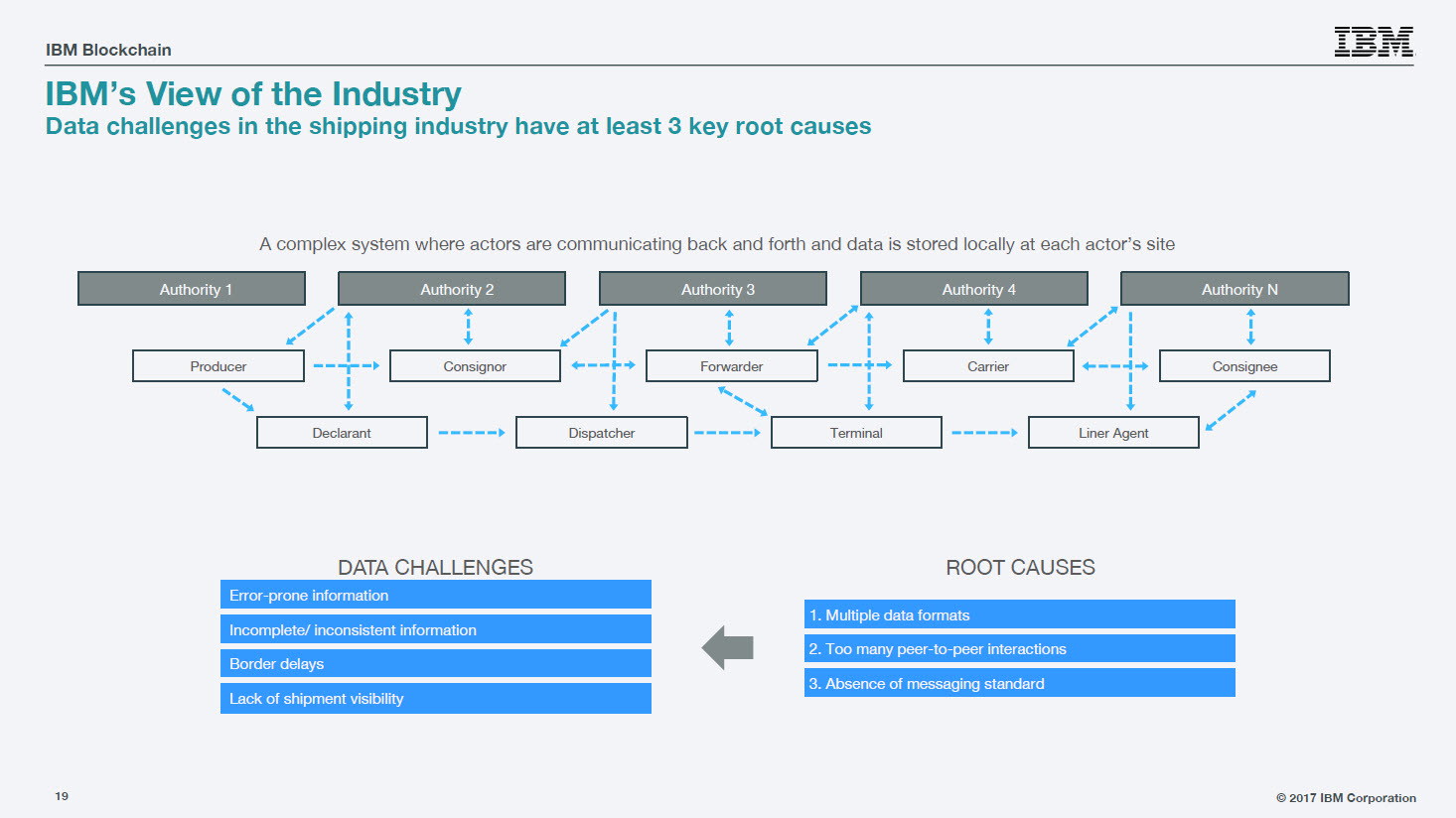 “Trade finance is simply the process, in which people, who don’t necessarily trust each other that operate in different parts of the worlds, utilize intermediaries like banks to make sure that they get paid and get the goods that they requested. —Sloane Brakeville, IBM

What are the issues?

According to Sloane, trade-finance and supply-chain systems that operate without blockchain are inefficient, vulnerable, expensive, and lack transparency. 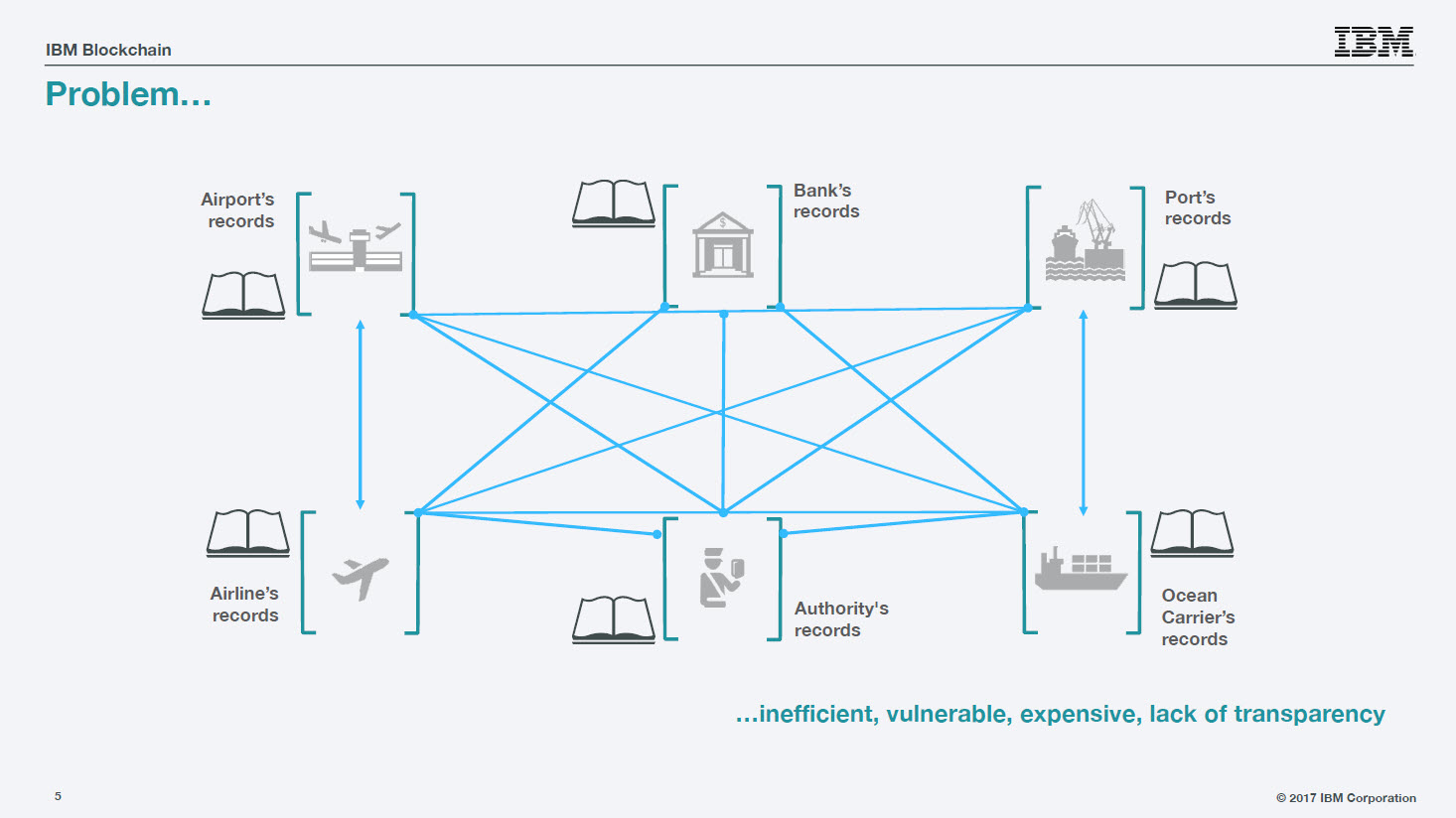 Each participant in this network has its own share of problems.

Having blockchain in the network makes a difference with key characteristics introduced: 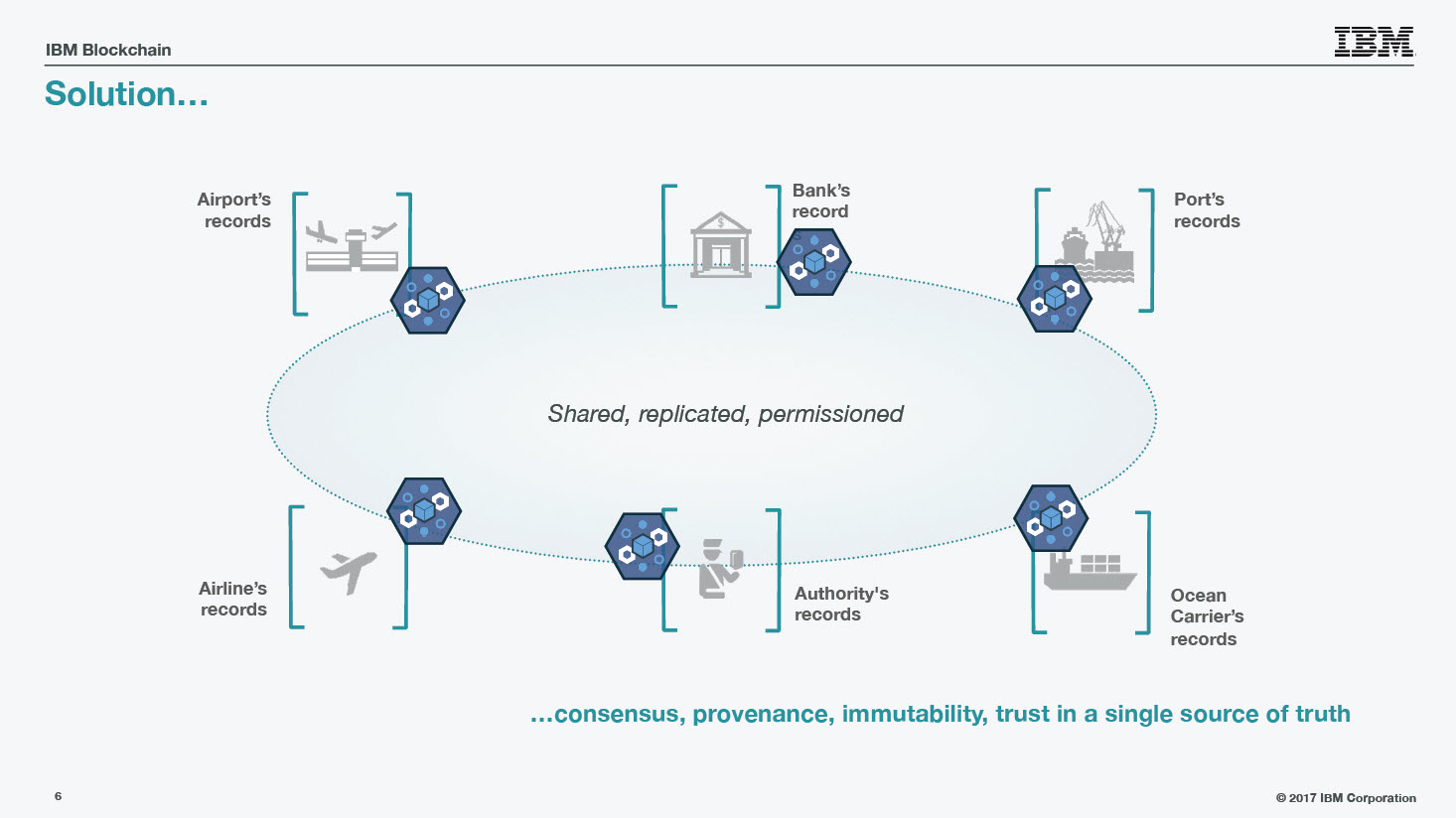 Blockchains also help reduce the influence that some validating participants have in long-established supply chains. In this scenario, the decentralized aspect of a blockchain mitigates the potential of a monopoly.

With 20 million or so containers afloat at any given time across the oceans of the world, transporting more than $20 trillion of merchandise over the course of a year, smoothly running trade-finance processes are essential to keep things moving.

In fact, Sloane said supply-chain complications and problems have a greater effect on global gross domestic product than tariffs. Today’s global supply chains exist in a world, in which “the cost of managing documents for a shipment is equivalent to the cost of shipping the goods.”

To address the issues of inefficiency and to provide optimal document workflow, IBM partnered with Maersk to put the process on a Hyperledger Fabric blockchain. (The announcement was issued earlier this month.) The partnership known as Global Trade Digitization (GTD), aims at providing support for physical document scanning and maintaining compliance with SWIFT, the global interbank financial transaction network.

An illustration of the GTD platform follows:

According to IBM, the GTD is a global, cross-border supply chain based on Hyperledger Fabric. It will help to manage and track the paper trail of tens of millions of shipping containers across the world by digitizing the supply chain process from end-to-end. Thus, it is supposed to enhance transparency and enable the highly secure sharing of information among trading partners.

It is designed to be fault-tolerant, and “as neutral as the Internet,” Sloane said, to allow all parties to use it with their own systems. He outlined several key problems that it addresses:

The massive and complex global shipping supply chain has several types of parties involved, and Sloane also described some of the key benefits for each participant, accruing to each from the GTD platform:

Intended to be integrated with already established trade systems, the GTD looks to provide trusted, tamper-proof, and cross-border workflows for digitized trade documents. The following slide illustrates how blockchain streamlines the process of sending and receiving paper documents used for trade by bypassing the cost of couriers, digitizing manual and paper-based processes, and reducing delays. 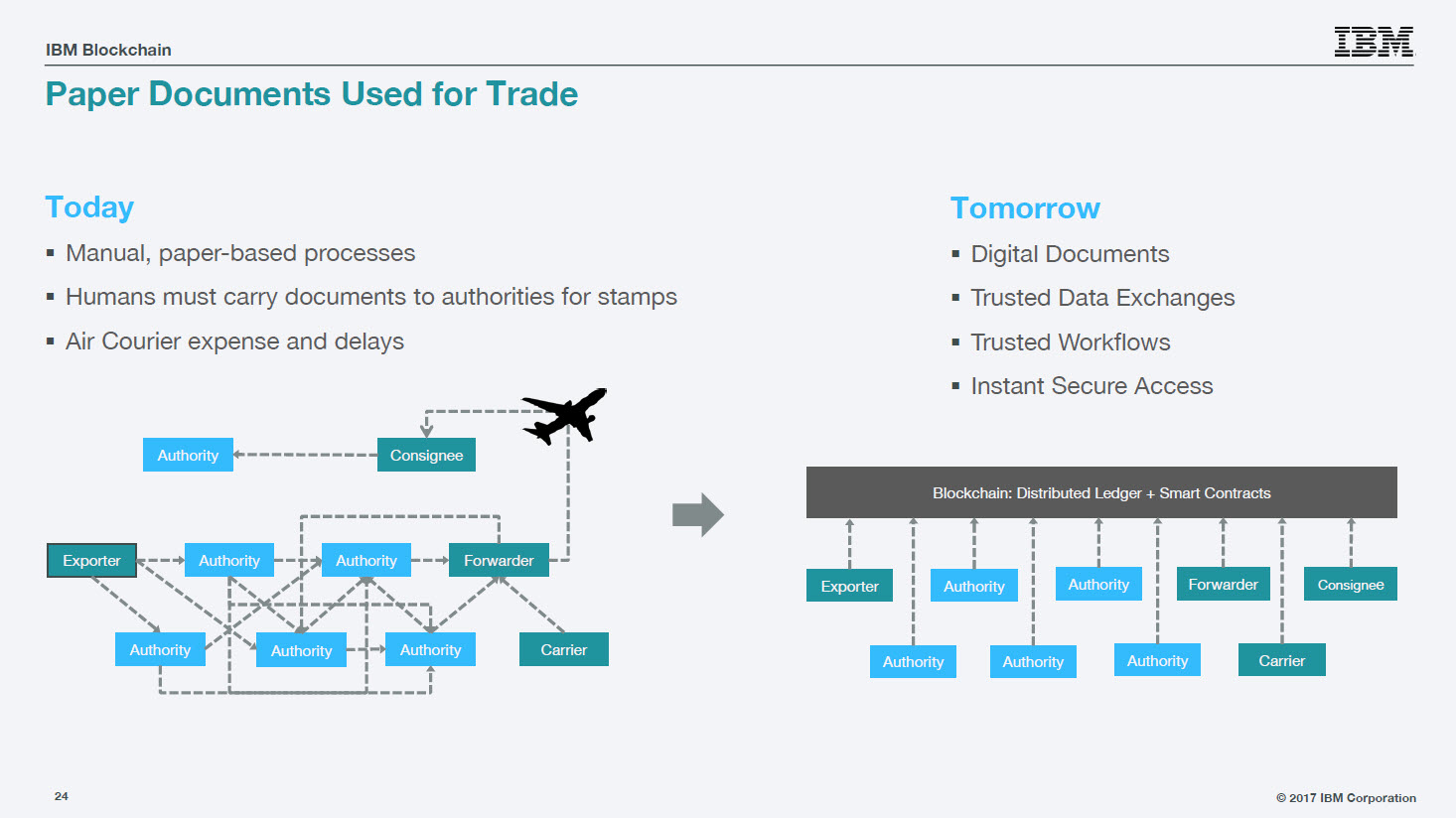 In the following scenario, the GTD improves visibility with blockchain through a shared communication network. The new system reduces the number of processes and actors to efficiently exchange information. 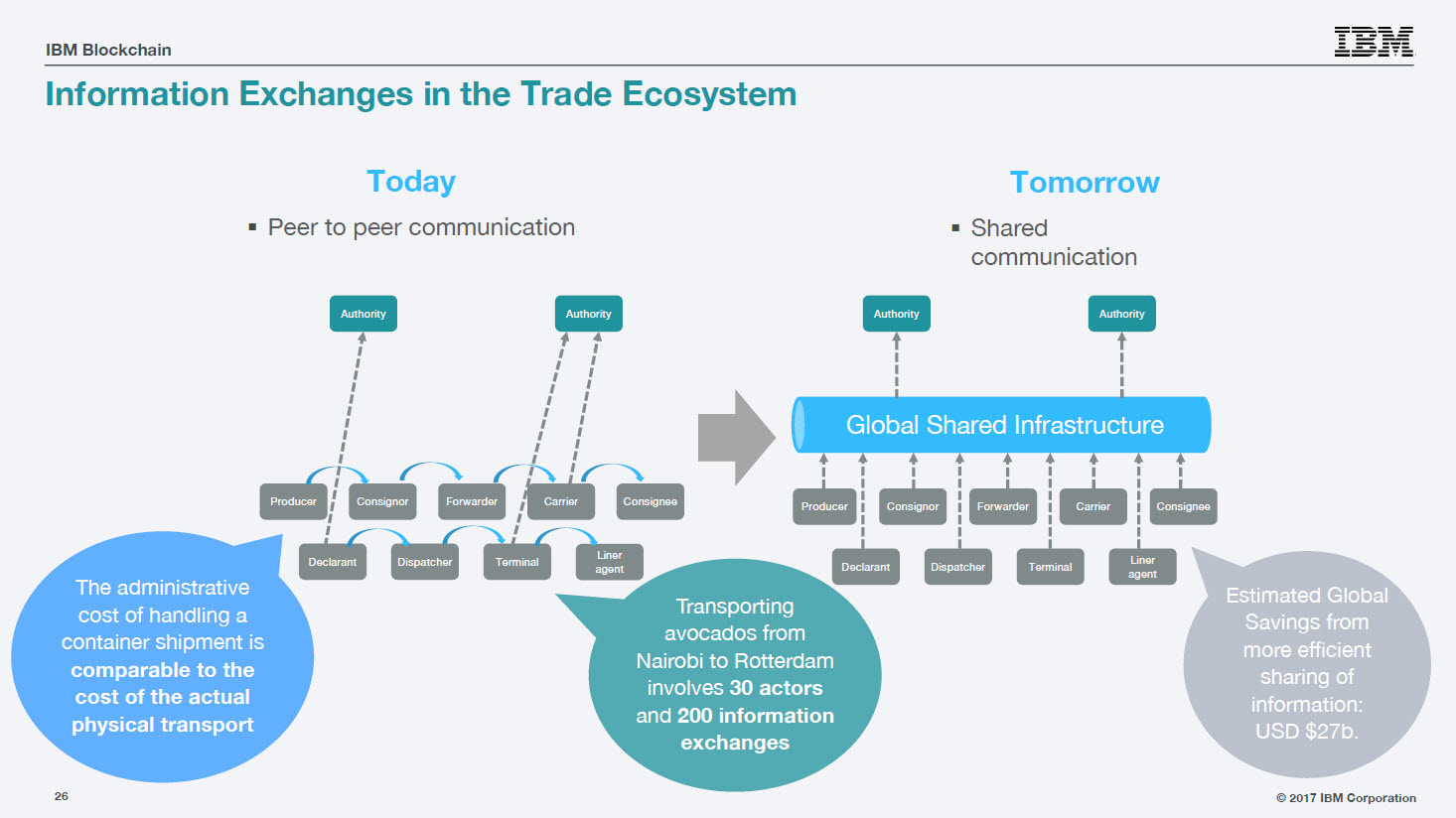 Expected to be widely available later this year, IBM and Maersk believe that GTD can save the trade finance industry billions of dollars. 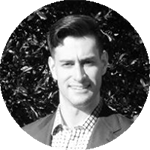 Sloane Brakeville is a member of the Blockchain Labs at IBM. He helps clients to grasp how to apply the blockchain / distributed ledger technology to prepare for the oncoming decentralization revolution. Working with IBM Blockchain and Hyperledger, Sloane has helped to build blockchain projects that have tangible impact in the financial services, trade finance, media, entertainment, and supply chain industries. Notable ventures he has been engaged with include the HSBC and Bank of America Letter of Credit project, and a major Canadian Bank Proof of Concept demonstrating the capacity of Hyperledger to show consolidated credit risk of customers.

The blog post is written by Roger Strukhoff and Carlo Gutierrez, edited by Sophia Turol and Alex Khizhniak.