by Roger StrukhoffNovember 21, 2016
IBM's Arnaud Le Hors explores what Hyperledger Fabric v1.0 brings to the table, examines related project incubations, illustrating the particulars of how blockchain can work in the enterprise. 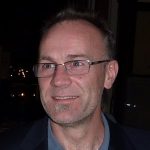 Hyperledger Fabric is an open-source blockchain implementation in the Hyperledger project. Earlier in October, Elli Androulaki of IBM overviewed some updates to be introduced to the current Fabric v0.6. This time in San Francisco, Arnaud Le Hors went into more details about how the anticipated version 1.0 will differ, what the roadmap is, and what’s going on in the Hyperledger incubator.

Arnaud is a Senior Technical Staff Member on IBM’s blockchain team, and has extensive experience with open-source technologies and industry-wide standardization efforts.

At a recent meetup, IBM’s Arnaud Le Hors focused on the specifics of Hyperledger Fabric and its impending version 1.0 release. He first noted there is a stable release known as version 0.6. 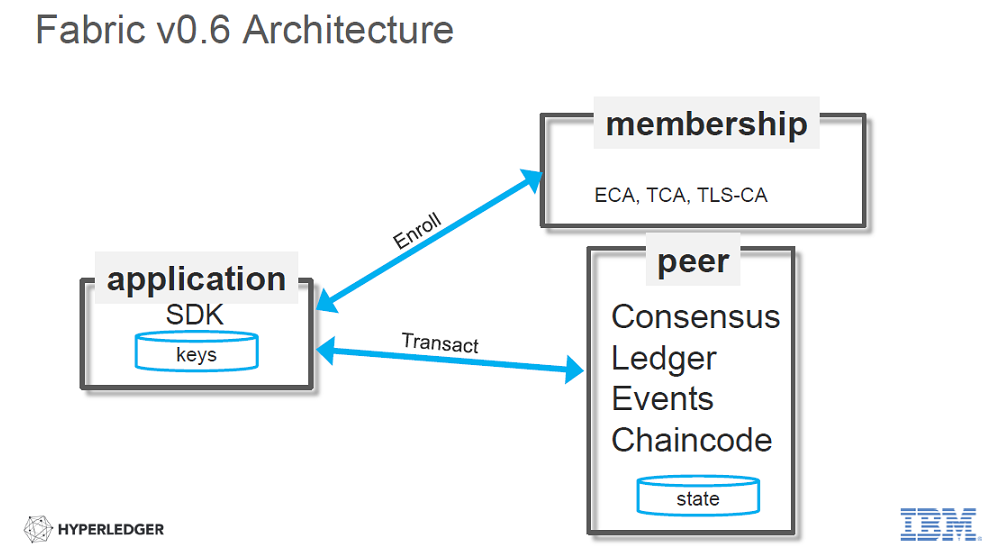 Yet several significant issues have arisen within this version, and are now being addressed into the Hyperledger Fabric, version 1.0 incubation, which Arnaud calls the “master branch” of the Fabric project. These issues include: 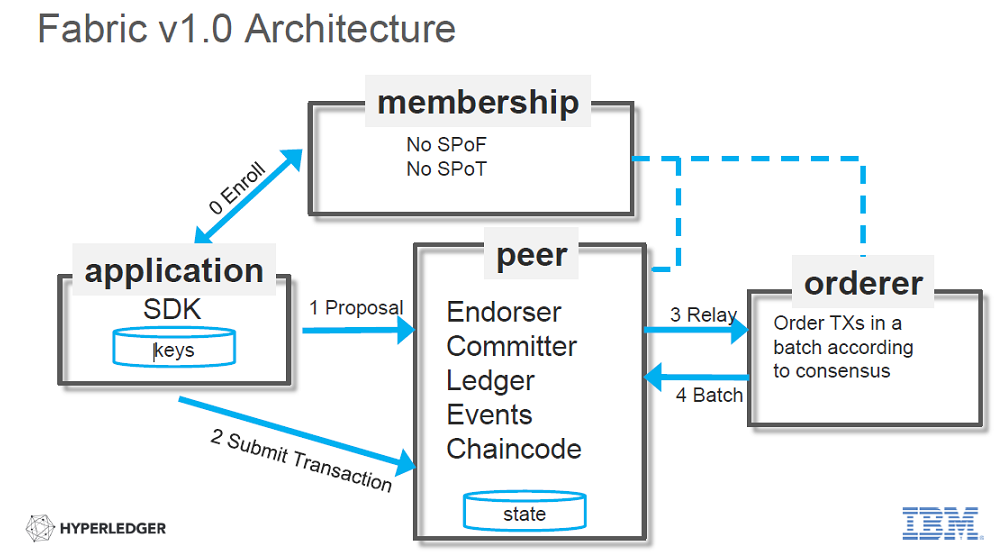 “We are also seeking different types of consensus that can be plugged into the network.”
—Arnuad Le Hors, IBM

There is also a roadmap, which culminates with the v1.0 release in March 2017: 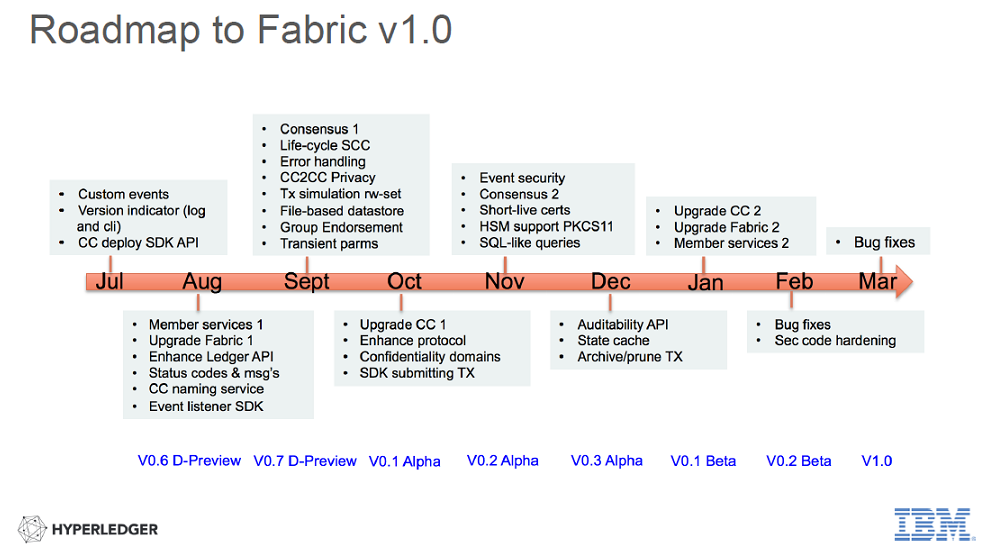 There is more than one ball in the air, as well. Hyperledger Fabric receives the most publicity and is the primary way that Hyperledger is being pushed forward at the moment. Over the past few months, it’s gained several incubations related to the core project: 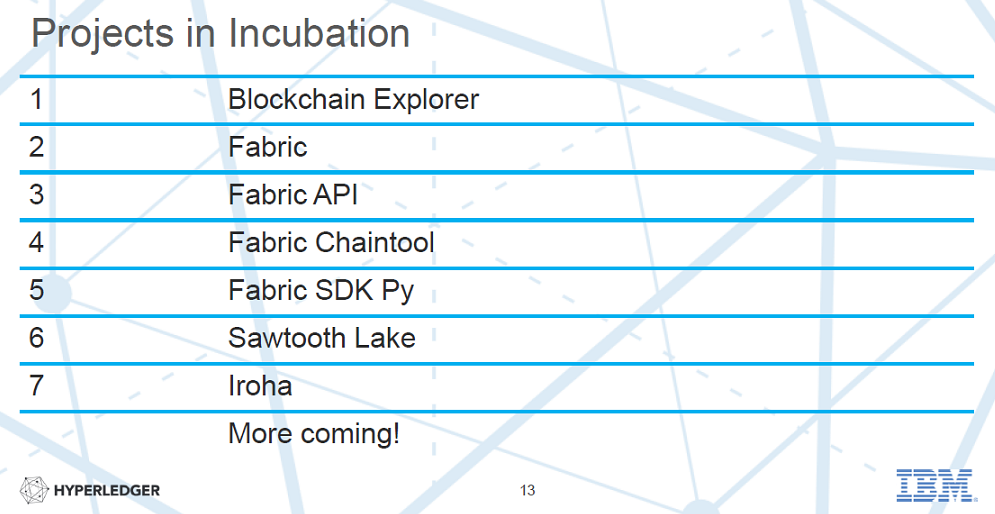 Several of these incubations relate directly to Hyperledger Fabric and its 1.0 release. But you’ll also notice the presence of Sawtooth Lake and Iroha in this slide.

Sawtooth Lake is a separate incubation first offered up by Intel. Its mission is to offer a permissionless environment (in the manner of the Bitcoin blockchain), as well as a permissioned environment similar to that of Fabric.

Its permissionless validation model is based on a proof-of-elapsed-time (or PoET, don’t you know it) concept that does not eat up the computing resources required by Bitcoin.

(Arnaud also noted that the Ethereum blockchain project, which is based in Switzerland and is not related to Hyperledger, is also working on permissioned and permissionless implementations.)

Ihora is a recent, and offered by several Japanese companies and an Israeli cryptocurrency, startup. It is written in C++, but “with an architecture point of view inspired by Fabric,” according to Arnaud. Ihora is also focused on mobile solutions and is meant to be “additive” to overall Hyperledger efforts, according to its founders.

Hyperledger and other enterprise-focused blockchains that may emerge are the Cheers bars of this world, places where everybody knows your name. They are trusted environments in which the users and transaction validators are chosen by mutual consent.

The cryptocurrency world, in sharp contrast, is a place of a theoretically unlimited number of people who need no permission to participate (these networks are thus called “permissionless”), in which transactions are validated by anyone who is able to suitably contribute massive amounts of computing power to solve difficult cryptographic problems.

Arnaud also reminded attendees that a blockchain is simply a peer-to-peer, decentralized database, “just a ledger in which you can write transactions.” Transactions are immutable (i.e., unchangeable), which is a cornerstone of all blockchain development. “If you want to change something, the only way to do it is to put another transaction on the blockchain that modifies the original transaction,” Arnaud said.

Blockchain started to permeate the consciousness of the enterprise IT world, as the Bitcoin cryptocurrency it undergirds became well-known. However, the Bitcoin blockchain’s environment, in which “people assume they can’t trust another,” as Arnaud said, “doesn’t work in the enterprise environment. Not trusting anyone in this environment is irrelevant.”

“The unit is irrelevant as far as the blockchain is concerned.” —Arnaud Le Hors, IBM

An example of an enterprise blockchain would be a group of banks getting together to settle transactions in a trusted environment. All parties know one another and none want to break the implicit trust they all share. Hyperledger addresses this sort of network, and Arnaud pointed out that “blockchain is merely a framework rather than a specific network. There will be thousands of networks among trusted enterprises” in the future, he said.

This sort of blockchain and network defines its own transactions. “The unit is irrelevant as far as the blockchain is concerned, and so is the content,” Arnaud said. In addition to financial records, there could be medical records or any other type of business transaction. He also pointed out that in this type of blockchain, a single block doesn’t necessarily (or even commonly) carry a single transaction; several transactions can be bundled in a single block, as determined by the network’s users.

He noted that cryptocurrency environments have limited throughput and slow transaction confirmation. Bitcoin issues a new block every 10 minutes, for example. As they’re designed to create and trade currency in a completely decentralized environment, they have poor governance and can be attacked by malevolent parties.

The Hyperledger project is designed to avoid these issues and create a trusted environment for enterprise transactions. “We are trying to keep some homogeneity, so that we use the same tools as much as possible,” Arnaud said.

“Yet at the same time, we don’t want to force everyone to see everything the same way, so we need a set of solutions that are very modular, based on the same core technologies but with some variations.” —Arnaud Le Hors, IBM

Hyperledger Fabric came out of the IBM’s Open Blockchain project. You don’t need to be an old-timer to recount Hyperledger’s history, as it was announced in December 2015. Several big members support it, many of them outside of the usual suspects’ list of technology companies, and it’s managed by the Linux Foundation.

Yet as Arnaud pointed out, you don’t need to be a big dog to participate: this is an open-source project that actively seeks people to attend Hyperledger meetings, work with Hyperledger in their organizations, or contribute to the project across several working groups. 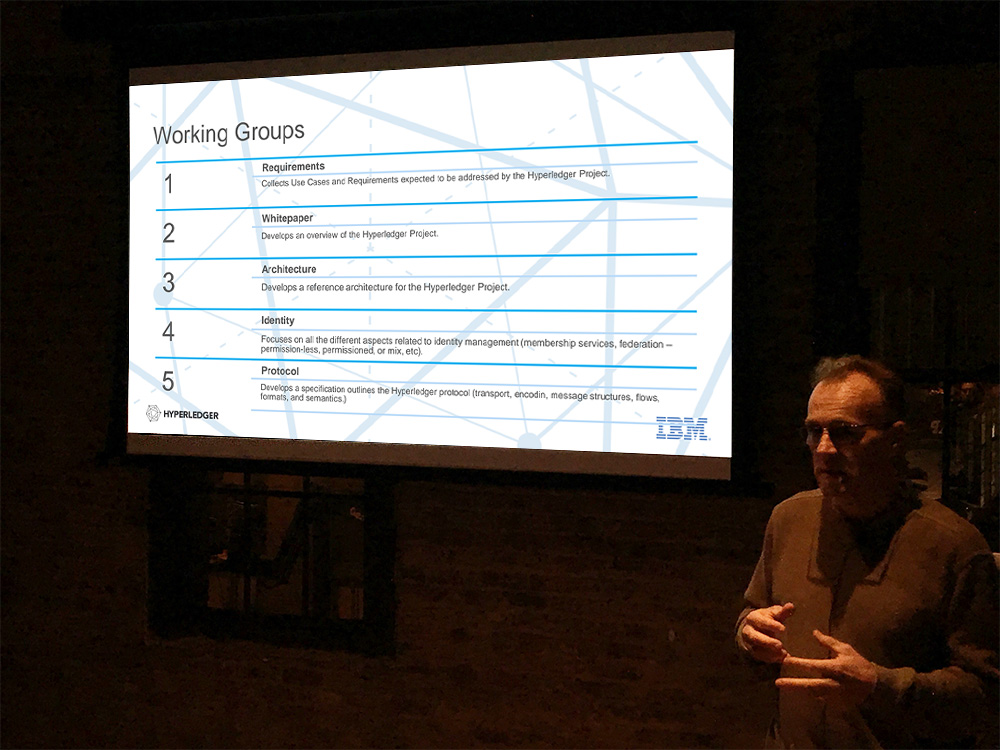 People wishing to engage with Hyperledger Fabric can look to Gerrit or GitHub (where Fabric code is in read-only mode), seek Docker images from DockerHub and join the Hyperledger Slack channel. 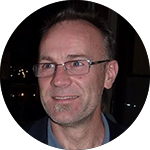 Arnaud Le Hors is Senior Technical Staff Member, Open Web Technologies at IBM. Arnaud has been working on open technologies for 20+ years, involving standards and open-source development, both as a staff member of standards development organizations (SDO)—such as W3C—and as a representative for IBM. He is involved in every aspect of the standards development process: the technical, strategic, political, and legal ones. Arnaud has also been involved in such open-source projects as Xerces, the Apache XML parser. Now he is focusing on the Hyperledger Project.

A Panel: Blockchain Introduces Opportunities in Identity Management
Next

Why Altoros Joined the Hyperledger Project