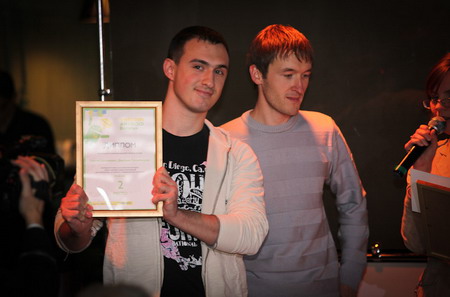 by Ekaterina VasilegaDecember 10, 2010
The wining app—chosen among 51 mobile projects—features a public transport schedule, detects a user location, and displays the closest stops.

An app for public transportation

Our colleagues, Dmitry Pogrebitsky and Sergey Balashevich, created an Android application that has won the contest held by one of the largest mobile operators in Belarus, Eastern Europe. The purpose of the competition was to choose the most useful and urgent mobile application for Android to help urban citizens in their everyday activities. Sergey and Dmitry created TransPot, a complete guide on public transport schedules. The application was built in collaboration with the Ministry of Transport.

Unfortunately, not every European city has detailed schedule boards on public transport stops. Even in the cities that have electronic boards, you still have to walk at the stop to learn the exact time of arrival and departure. In the city where Dmitry and Sergey live, there are 187 bus routes, 63 trolleybus, 8 tram routes, and 2,038 public transport stops. Not having the exact schedule at hand can often be a headache to citizens. It means that you will have to wait on the stop for the next bus, instead of leaving your apartment, office, or a cafe just before it arrives.

Sergey and Dmitry decided to help citizens and tourists by delivering a precise schedule of all public transport, including buses, trolleybuses, and trams. All you have to do is to choose the stop on the map from the list or find it using the augmented reality browser. The application will then show all the public stops and the time left till transport arrival with one-minute accuracy.

The schedule 100% matches the official schedule of public transport. The updates are received directly from the Ministry of Transport’s server, which is an official contributor to this project.

Utilizing the built-in Android features, such as GPS and camera, the application goes even further. It helps to find the way around the city, detecting a user location through GPS and displaying the closest public transport routes and stops on a visual map.

In addition, it allows for finding the way to the closest stop utilizing augmented reality. The real-time information is displayed in Layar Browser on top of the real world as seen through the camera of a smartphone. The Compass 3D feature works by using a combination of camera, compass, and GPS data to identify a user location and field of view. The data is retrieved based on those geo coordinates and then overlaid on the camera view to help find the stops closest to the location of the user.

The application was tested on 25 public transport stops of 35 transport routes. The average inaccuracy in schedule is just 44 seconds, except for the natural delays that cannot be overseen by drivers and dispatchers.

Sergey and Dmitry competed against 51 mobile development projects for Android. We are proud that our colleagues won, and wish them best of luck in bringing more useful applications to smartphone users.

Katherine Vasilega is a proficient writer with a proven experience in delivering compelling articles on data integration, data quality, ETL, and software product development. She is also responsible for efficiently explaining sophisticated technical concepts to common audience. In addition, Katherine can boast of a solid background in journalism.

Implementing a Business Rules–Based Approach to Data Quality
Next