Zynga Goes Cross-Platform with Adobe AIR, Doubles Its User Base 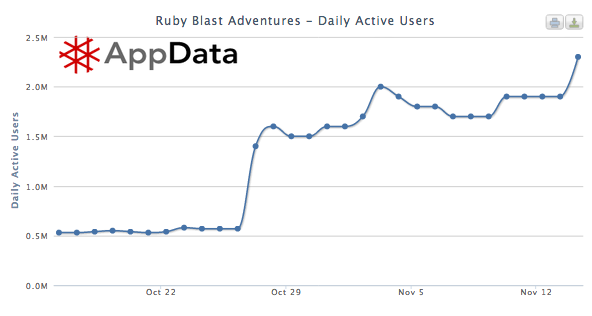 by Olga BelokurskayaNovember 21, 2012
The company managed to increase the number of its Ruby Blast active players twofold by porting a Flash game to a mobile app using Adobe AIR.

Zynga, the world’s widely known provider of social gaming services, has recently announced a mobile version of their popular game Ruby Blast, making it available not only across different social platforms, but on mobile, as well.

This became possible thanks to Adobe AIR, a cross-platform runtime that allows for building RIAs that can be run either as browser apps, desktop, or mobile, and support numerous operating systems.

Zynga’s move affected the game impressively. Since October, when Ruby Blast was made cross-platform, there was a surge in the number of the game active players, according to the graph provided by Inside Social Games, which currently counts 2.3 million.

“Porting a Flash game to a mobile application with Adobe AIR helped Zynga to increase their audience twofold and without having a lot to do. The great thing about AIR is that you don’t have to rewrite applications to run them across different platforms.”
—Valery Pesetski, the Head of Flex Development at Altoros

According to Valery Pesetski of Altoros, the AIR runtime enables developers to take RIAs out of browser borders, making them look and work as native desktop or mobile apps. It helps to reach a wider audience and shortens the development time, as you don’t have to write different pieces of code for different versions of an app.

Valery has extensive experience in Flex development. Being a part of our development team, he contributed into many Altoros’s Flex projects, including cross-platform development with AIR, as well. Valery is also a leader of a local Flash/Flex user group. Let us know if you want to chat with him on the topic.

Can Japan Win Over COVID-19 with Technology, Automation, and Telemedicine?
Read More
617

A Vendor-Independent Comparison of NoSQL Databases: Cassandra, HBase, MongoDB...
Next