A A A
Home page » News/Opinion » The Cloud Foundry Foundation: a PaaS Revolution?
Contents
285
0 Comments 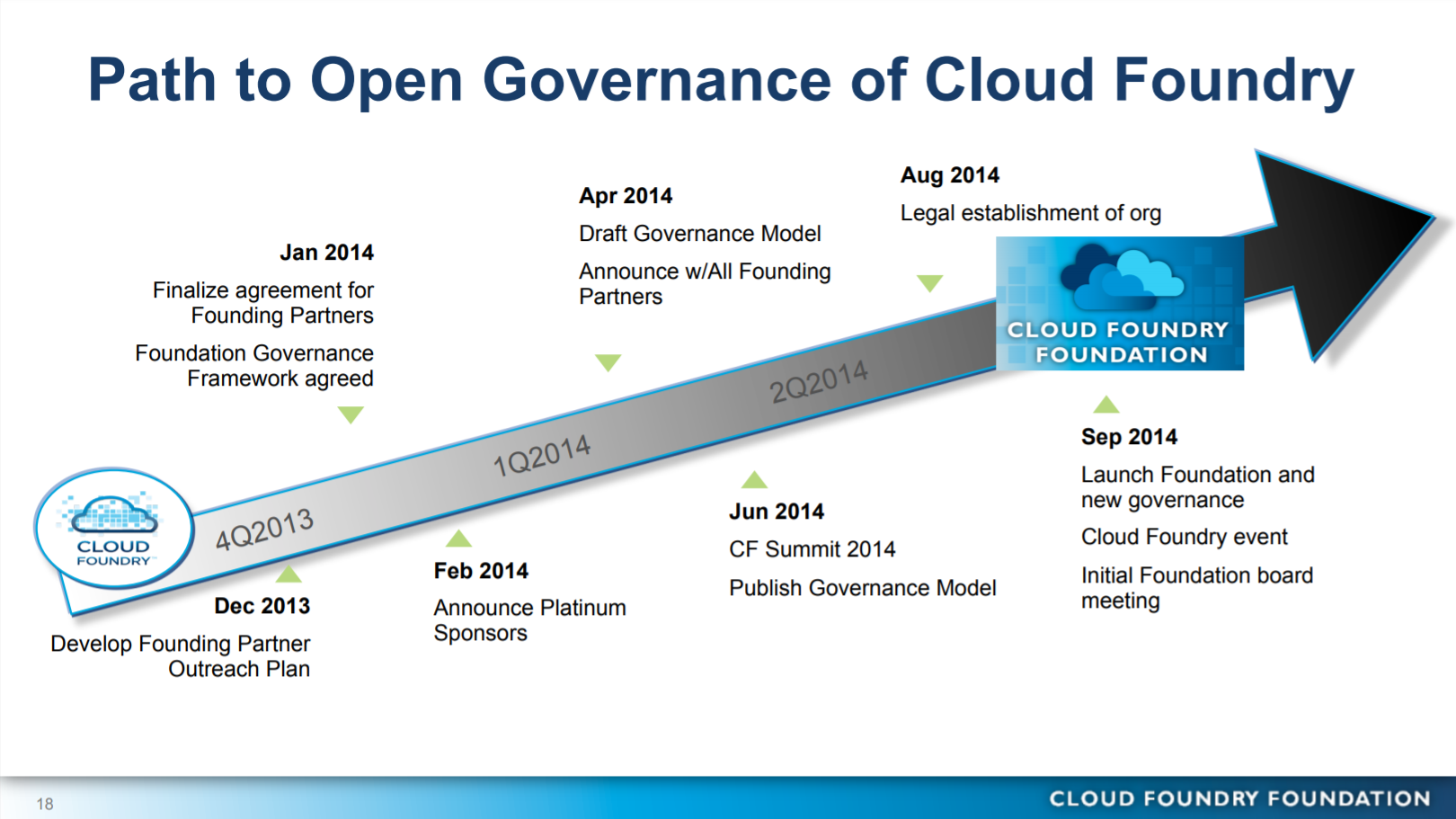 by Renat KhasanshynFebruary 24, 2014
Just as we are witnessing the tipping point of the Ukrainian revolution, something similar just happened in the cloudy world of IT.

The open-source project Cloud Foundry exploded overnight. Pivotal announced that a group of major IT vendors will form the Cloud Foundry Foundation, a legal entity aimed at providing a formal governance body for the open-source software project. The group united around Cloud Foundry pulls a combined market capitalization of almost half a trillion dollars. IT superpowers have spoken.

What happened today might be the beginning of a new era for IT folks in the vendor ecosystem and their customers.

What does this mean for enterprise IT customers?

With this announcement, backers of the foundation are sending their customers a simple message: the traditional way of delivering applications is outdated, and Cloud Foundry will fix it. Here is why. At Altoros, we see three types of customers:

Capturing these benefits is not an easy job, especially when your IT teams design and manage almost each and every development stack nuts-to-bolts, in most cases—one at a time. What we learned is that the companies who became really good at capturing these benefits are using the PaaS to limit the number of permutations in their development stacks all the way from virtual machines to the applications.

Instead of providing flexibility for each and every stakeholder on each and every layer of an application architecture, they aim to provide a set of pre-defined, pre-approved combinations of runtime environments and database services in the form of APIs, focusing their application development teams on agility and business results.

What are the goals of the Cloud Foundry Foundation?

The goal of the Cloud Foundry Foundation is to promote the development and adoption of Cloud Foundry. Those of you who are bullish on the PaaS technology should read the goal as “to establish the project as a new standard for delivering software applications.”

Was forming the foundation really necessary?

How will the foundation help vendors and customers?

Speaking the language of the revolution, the foundation offers a set of rules, a legal basis for enforcement of such rules, and—most importantly—guarantees.

What does the announcement mean for IT vendors?

Legacy vendors (infrastructure/hardware, software, and hosting) are forced to reinvent their businesses every now and then. The remarkable rise and domination of AWS disrupted many in the vendor ecosystem. Amazon is known for changing the landscape of many (but not all) industries it has played in. Legacy vendors have to move very fast. Cloud Foundry provides a perfect ground for many vendors to unite around a common goal.

Here is what some of the foundation members could do with Cloud Foundry:

One vendor from the Cloud Foundry ecosystem was not present among the members of the foundation. It was Canonical, one of the key beneficiaries of the announcement. Ubuntu, Ubuntu OpenStack, and Cloud Foundry, all enjoy perfect synergies with the exception of conflicting deployment tool chains (Cloud Foundry’s BOSH vs. Canonical’s Juju—both can deploy anything, anywhere). In one of my next posts, I will cover in depth why the union of Cloud Foundry and Ubuntu OpenStack changes the game for many.

The question is, did anyone lose? Well, the PaaS vendors competing with Cloud Foundry just got more work to do, and lots of it. Red Hat will now face even more challenges in building an ecosystem around OpenShift. I really hope that the folks at Red Hat will work with the Cloud Foundry community to standardize around the runtime and services, which are now incompatible. Wouldn’t it be nice to see the cloud moving to the next level of interoperability, at least at the PaaS level?

A High-Level Overview of OpenShift and Cloud Foundry: Features and Architectures
CATEGORIES