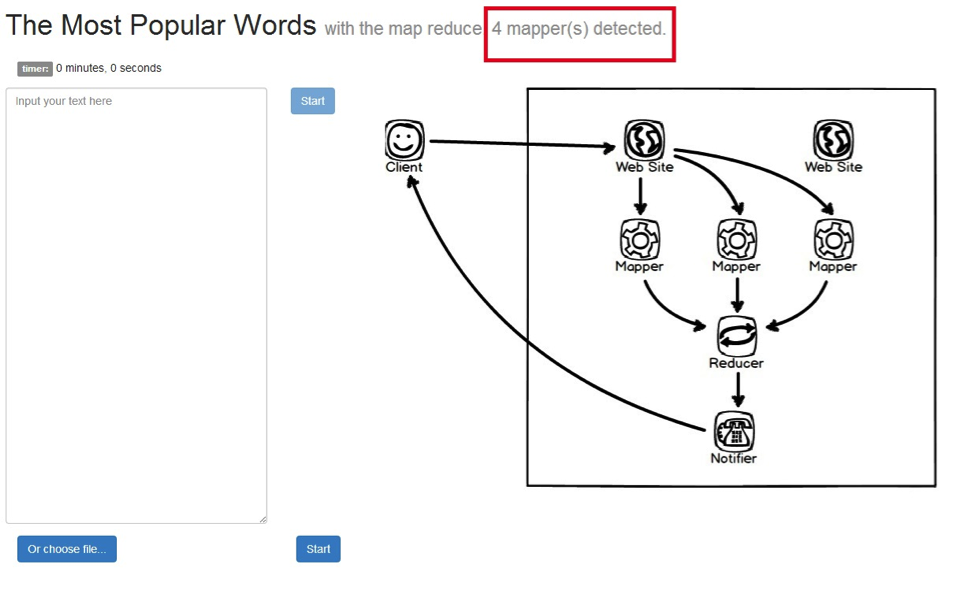 by Alex MakarenkoJuly 28, 2014
This blog post demonstrates how to deploy a prototype app—capable of word search—on Cloud Foundry.

Most customers prefer to validate a concept before investing into a production system. In our case, an ultimate solution should allow for long-running computations, have a web interface for setting tasks, and support MapReduce or other data processing methods. So, an ideal prototype would be a platform that provides a simple method for deploying, scaling, and monitoring apps. That is what Iron Foundry does.

In this post, we’ll describe how to create a prototype with Iron Foundry on Cloud Foundry. Our test application will use MapReduce to find the most popular words in a text. The picture below demonstrates the data processing workflow. 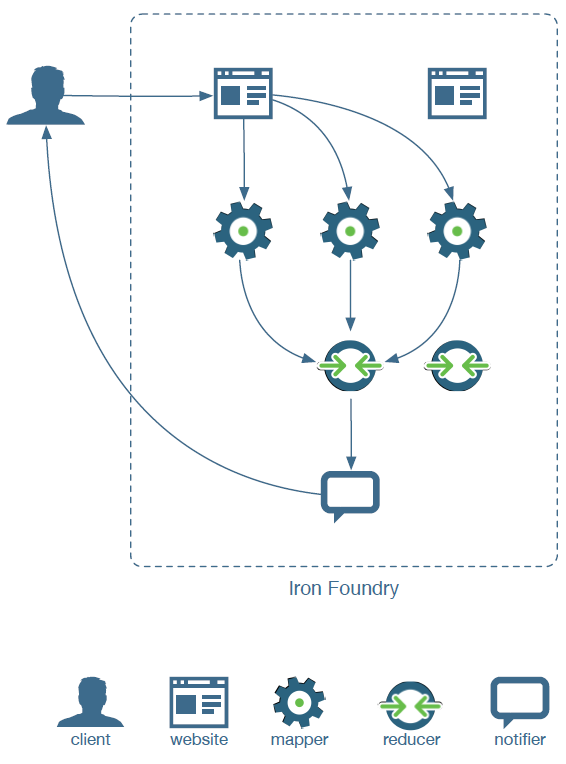 As you can see, text is transferred from a client to a web component for processing. At this stage, the job is divided between available Mappers, which send the results to a Reducer. In its turn, the Reducer performs final computations and returns the output back to the client via a Notifier. Below, we will describe how to create each of the components, establish communication between them, and deploy an application with Iron Foundry.

So, let’s start with the first component of the system—a website. It is easy to push a standard MVC application to Iron Foundry using IIS Hostable Web Core. We didn’t even have to change the code or do additional configuration. And what about hosting web applications with Iron Foundry?

Our web application will not depend on IIS and—most probably—it will use HTTP Listeners to handle traffic. Keep it in mind that you should know port numbers to enable listening to new HTTP requests. We learned how to do it in the Iron Foundry Google group.

So, Cloud Foundry router will redirect all requests to VCAP_APP_PORT. It is also necessary to use a http://*:port/ pattern to follow the Iron Foundry firewall rule.

Now, we should provide communication between all the components of a system. If we take Microsoft Azure, Message Bus is used as a messaging infrastructure. In the current version of ironfoundry.me, there are only two services (MS SQL and MongoDB), and no messaging options are provided. Definitely, we can use RabbitMQ-as-a-Service, but its free plan does not allow us to have more than three connections, and it lacks some other features our demo needs. We knew that it is not a great deal to build a custom messaging component based on the MongoDB capped collections. To test this approach, one should know how to:

Adding MongoDB is simple, all you need is execute two commands in the command line interface: create a service and bind a service. Below, you will see an example of creating a my-mongo service and binding it to the Mapper app.

After binding, the VCAP_SERVICES environment variable will contain all the necessary details to establish a connection.

Unfortunately, our first attempts to launch our own messaging service failed. We were able to connect, but when we were trying to start any activity, there appeared a message: “System.IO.EndOfStreamException: Attempted to read past the end of the stream.” As we have already tested this solution locally and it worked well, we were not really inspired by the idea to start creating a new one over again. Here, we should do justice to the ironfoundry.me developers. They are open for communication and listen to the community. So, very soon they adjusted a default configuration setting on the MongoDB deployment, which resolved this issue.

However, there is another way of adding a messaging service. We found MongoDB-as-a-Service in the list of Cloud Foundry services. This solution has a free plan with lots of capabilities. So, we have just created a new database and successfully run our Iron Foundry MongoDB Queue test application.

Next time, we will tell how to create a notifier using WebSockets and show how to build a simple MapReduce app in Iron Foundry.

Implementing a notifier with WebSockets

In the beginning, we showed the architecture of the system. As you can see, a Notifier app pushes real-time updates to the client via WebSockets. There are many frameworks that provide the required functionality. We opted for XSockets.NET, a framework for building real-time .NET apps.

We needed to create a self-hosted XSockets server in Iron Foundry and establish communication between it and the HTML client. Unfortunately, we failed to negotiate a handshake with XSockets in Iron Foundry, since the Cloud Foundry router had some issues with the WebSockets. Then, we came up with another idea of starting a Node.js HTTP server and attaching a socket.io instance to it.

It worked out, and we became able to access the HTML client. However, one more thing was left—the server should be accessible from the .NET Reducer console app. That is why we had to use socket.io v0.9 instead of sockets.io v1, which was not supported by the socket.io library. So, the notifier was implemented as a Node.js server in combination with the socket.io package v0.9.

At this stage, you should put all components into a single system. Our web client is a simple HTML page developed with AngularJS and Bootstrap. It looks like shown below. 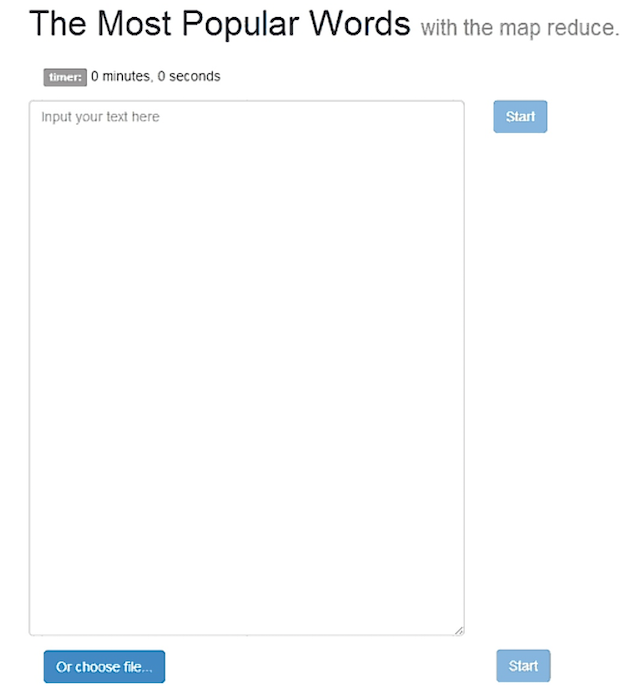 We will host the page and services via ServiceStack. To start such a web component in Iron Foundry, you need to get a VCAP_APP_PORT variable.

The Start button will send the text to the server, where it will be divided into several parts and propagated to the Mapper applications.

The main goal of our algorithm was finding a word that has been used most frequently in a text. Planning logic of a prototype app in Iron Foundry is the same as on any other platform, so the steps described in this post are quite universal for all MapReduce workloads.

The diagram below illustrates how the MapReduce algorithm works.

Basically, the test task can be represented by two simple unit tests.

You can use the following code to implement the Mapper tasks in C#.

As an alternative, if you prefer a functional style, you can create the Mapper tasks with F#.

Since the C#-based solution worked a little bit faster under the workload used for a prototype app, we opted for it. Now, we are not going to research into how to improve performance, since it is a topic for a separate blog post.

For reducing operation, we can use the approach described below.

So, the preparations are over, and now we should think how an app will process the Mapper and Reducer tasks. The first component will map the text and send it. You can implement a Reducer using the reactor pattern. It has an Event Demultiplexer, which will display names of Mappers ready for sequential processing.

In the next section, we will tell you how to assemble all parts of the prototype into a single solution. You will also learn how to deploy a MapReduce app to Iron Foundry.

In this section, we will show you how to deploy an application that consists of four major components: a website, a Mapper, a Reducer, and a Notifier. The picture below illustrates the workflow for processing a request from a client application. Each of the components can be scaled horizontally. 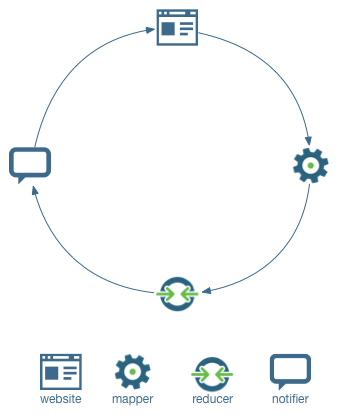 Our main goal is to deploy the system as easily and quickly as possible. You need to copy binary output with a post-build event for each application to a folder with the following structure.

Please pay attention to the “stack” element. It should be Windows 2012 for .NET applications. If your application is designed to run as a background worker, you must specify no-route: true. Once this setting is enabled, the Iron Foundry component will stop trying to connect to the application to check its health status.

Since a Notifier is not a .NET application—it uses a slightly different manifest file—we have added a buildpack with Node.js. It specifies what runtime must be prepared for the application. In the manifest file, we added a command that will execute the Node.js file. Remember to add the package.json file to the Notifier folder. This file must contain details about the deployed application.

After you have pushed your applications, open ironicweb.beta.ironfoundry.me to make sure that all of your application instances (10 in our system) work together and respond to requests.

Validating a prototype in Iron Foundry

In this section, we will share our experience with Iron Foundry’s integration capabilities. At this stage, we have already used Iron Foundry to deploy our product on Cloud Foundry. There are four connected microservices horizontally scaled to eight instances.

Two of the components can be accessed via HTTP using these URLs: ironicweb.beta.ironfoundry.me and ironicnotifier.beta.ironfoundry.me (the second one is a node HTTP server for socket communication without a UI). IronicWeb helps to find the most popular words in texts. The web interface allows for entering text manually or via a simple file upload.

The first step after the web page has loaded is to discover mappers. To do it, IronicWeb uses a custom MongoDB messaging component. This enables us to scale mappers via the command line interface and ensures that the new map-reduce job will use all available resources.

To re-deploy the entire system, we must run just one simple cf p command and wait for staging to finish, which takes less than a minute. There is no need to worry about the environment and various settings—we can just code and enjoy the result.

In the next post, we will explain how to move the whole system to the original Cloud Foundry platform without Iron Foundry. In addition, we will go over the current options and limitations for.NET products on Cloud Foundry.

This series was written by Alex Makarenko; edited by Volha Kurylionak and Alex Khizhniak.

.NET on Cloud Foundry, Part 1: Installing on Windows and Using Iron Foundry
Next

E-mails in Ruby on Rails