Microservices and OpenWhisk Made Simple: the Story of Dave

by Carlo GutierrezAugust 1, 2016
Dr. Andreas Nauerz of IBM explains how the OpenWhisk platform works for creating event-based microservices—with a little help from Dave.

We already have quite a few posts talking about the ins and outs of OpenWhisk. This promising open-source product for creating event-based microservices is available on IBM Bluemix as a service. At IBM InterConnect, Dr. Andreas Nauerz summarized OpenWhisk and told of a scenario where it may fit. 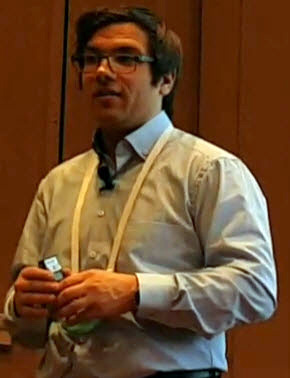 “OpenWhisk is an event-action platform that allows you to execute code in response to events,” said Dr. Andreas as he condensed OpenWhisk’s most prominent features into four major points:

To demonstrate how OpenWhisk provides value to a business, Dr. Andreas tells the story of Dave, a lead architect of an online photo community and marketplace. 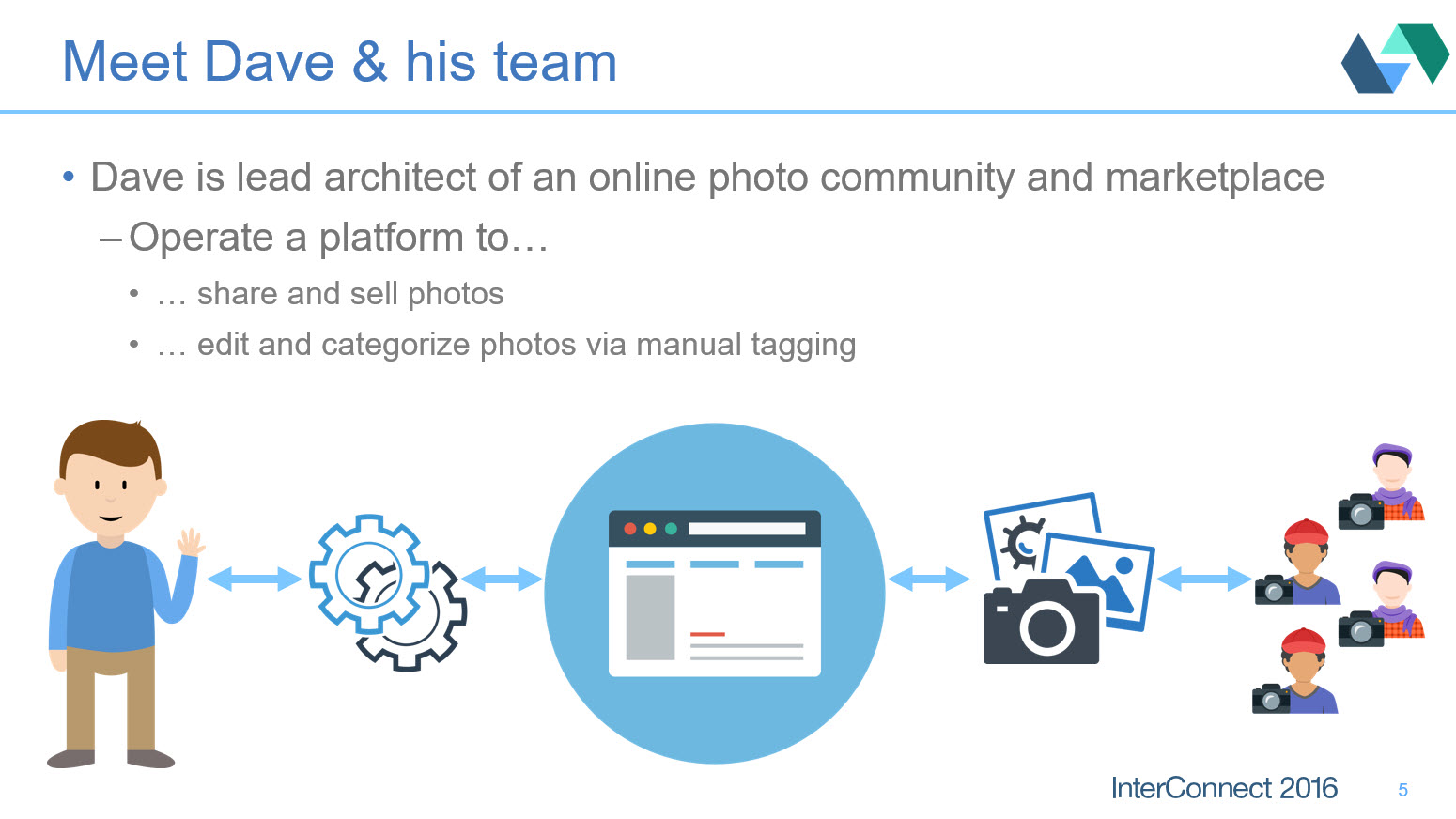 Dave and his team are in a competitive industry, so to have an advantage over their competitors, they need to add innovative features. 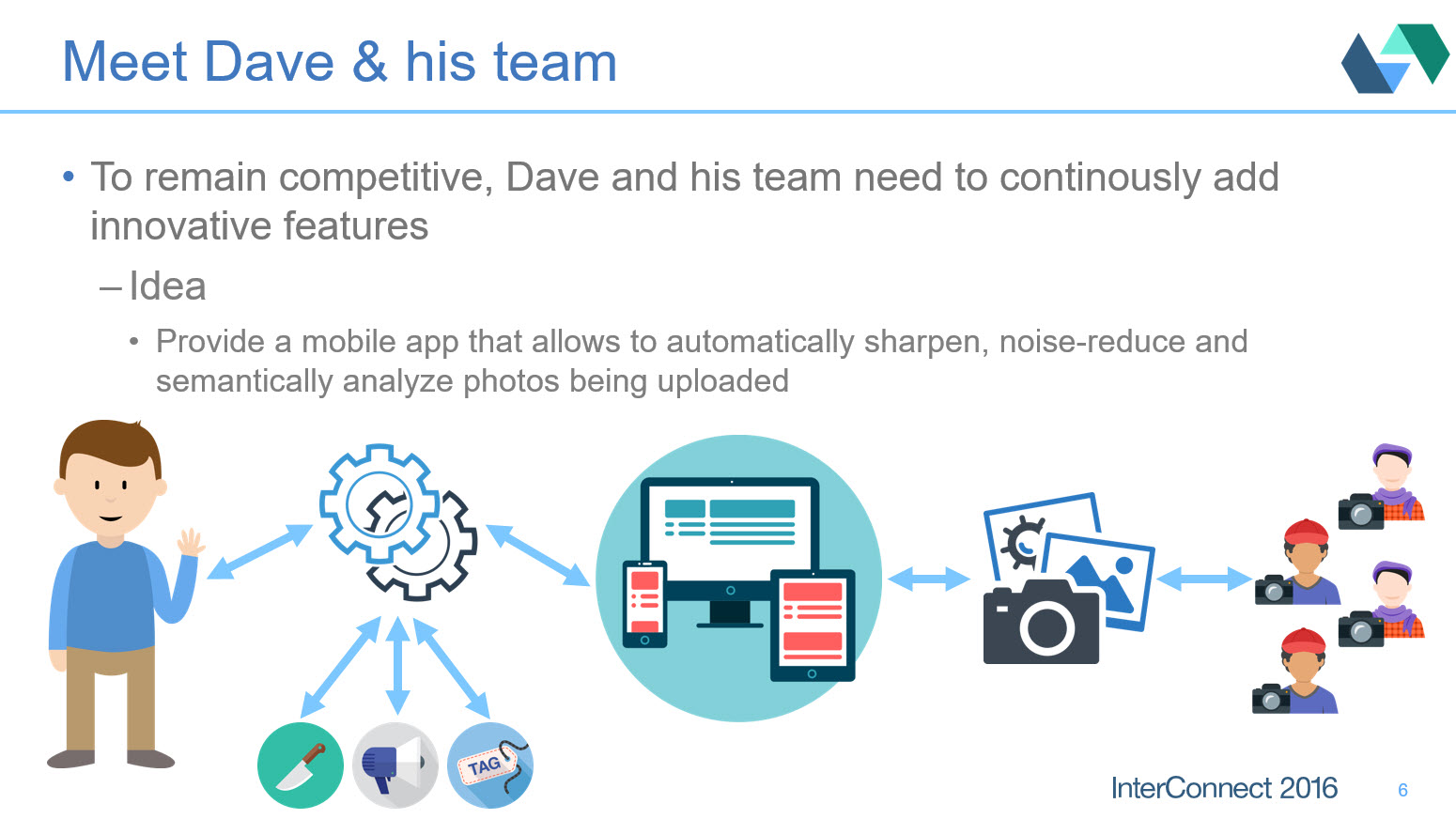 With an idea in mind, they start to collect requirements. In the past, they would spent a lot of time and effort dealing with operational and infrastructural aspects. This time, they want to focus on developing value-adding code. OpenWhisk enables them to do so, because it hides all the complex details.

“OpenWhisk simplifies the development process by allowing you to simply do one thing that you as as developer want to do: coding.” —Dr. Andreas Nauerz, IBM 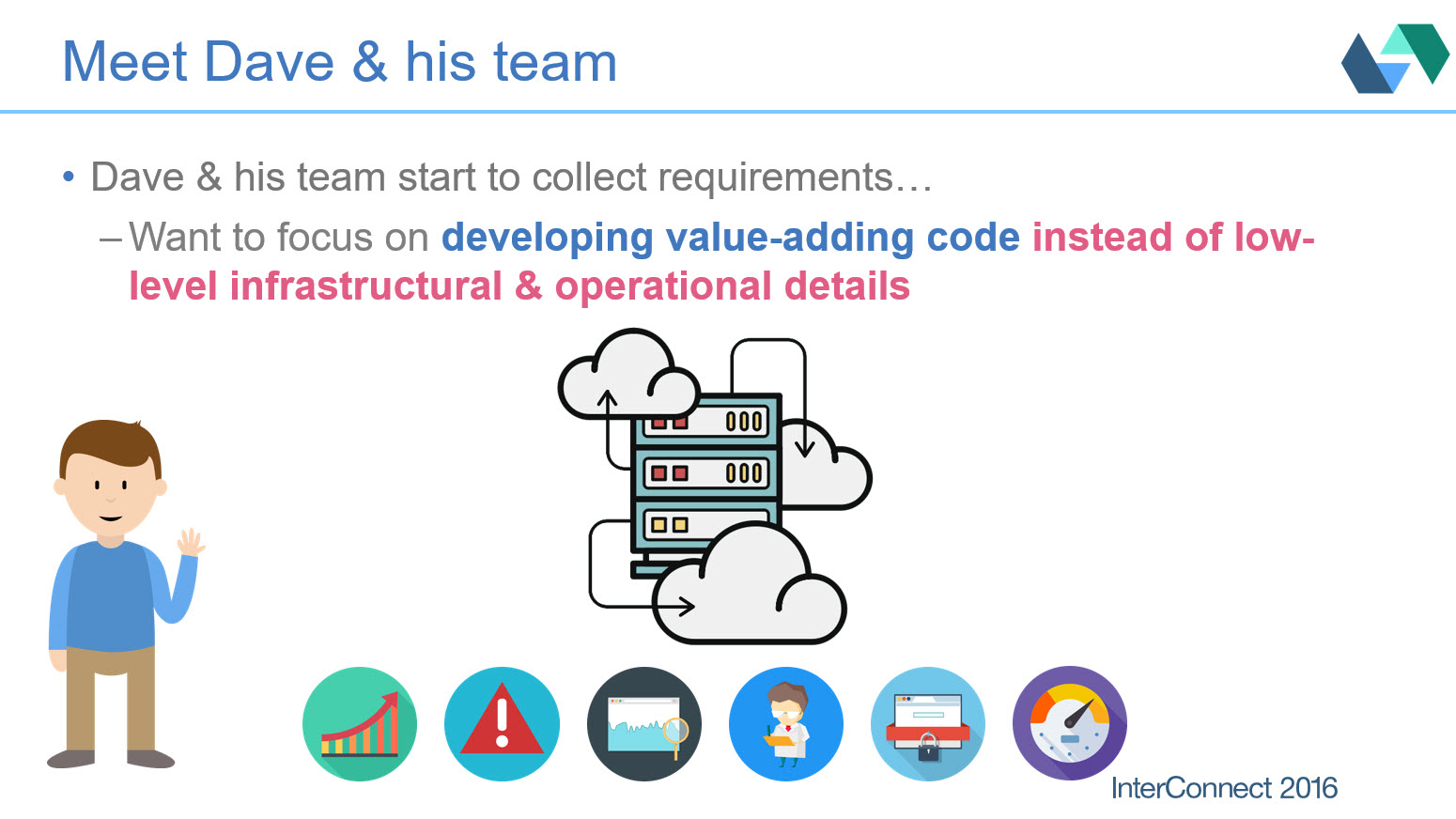 Dave and his team have adopted an agile approach to development, where they have smaller teams working on individual components. OpenWhisk gives them a flexible programming environment and model that allows them to reuse the skills and technologies each team specializes in. 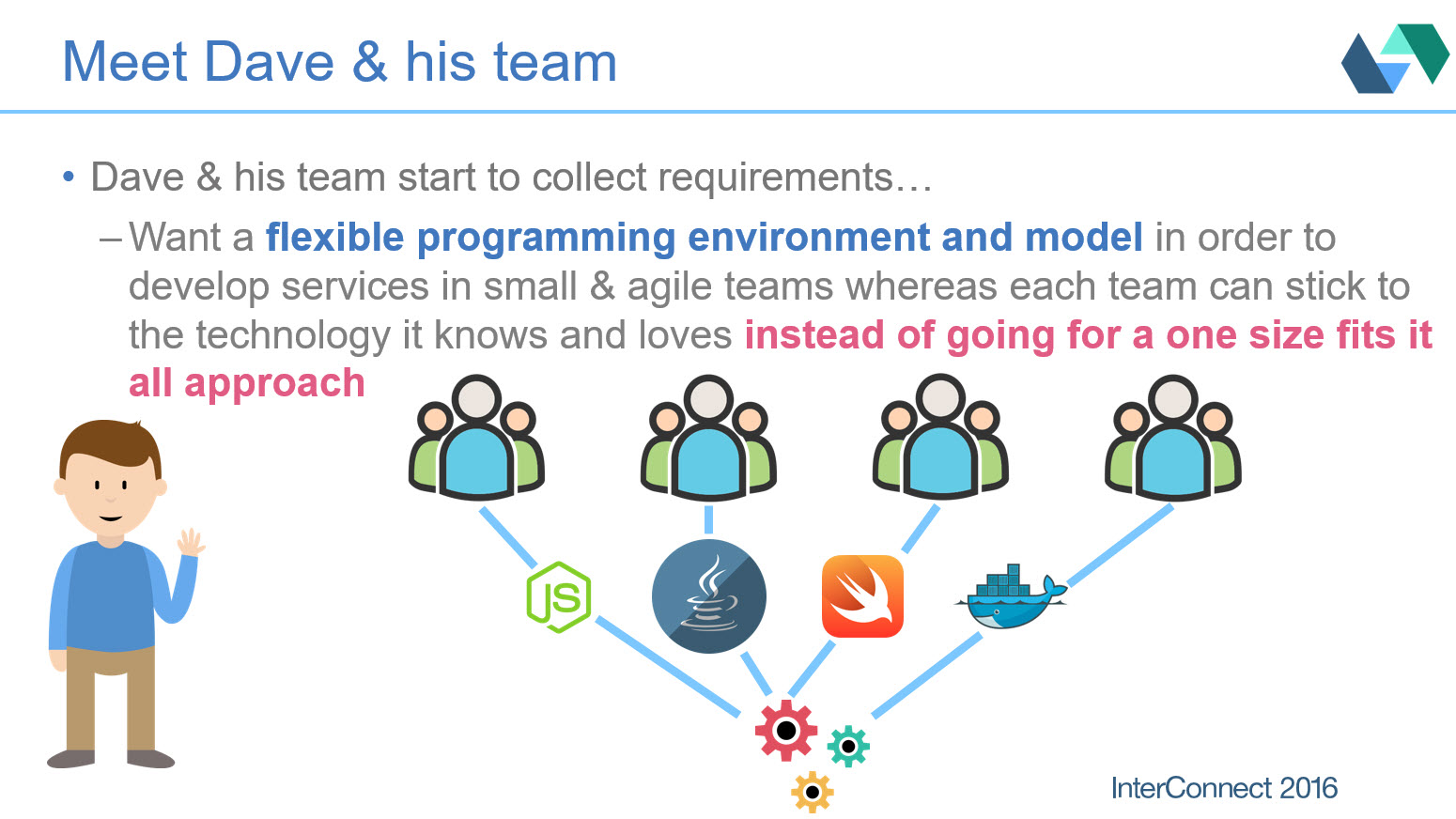 Dave and his team don’t want to recreate solutions that already exist. They want access to an open ecosystem which provides them building blocks from multiple domains such as cognitive analytics. IBM Bluemix gives them this access.

“We made OpenWhisk open-source, because we wanted people to participate and contribute in accelerating the development of a rich open ecosystem.” —Dr. Andreas Nauerz, IBM 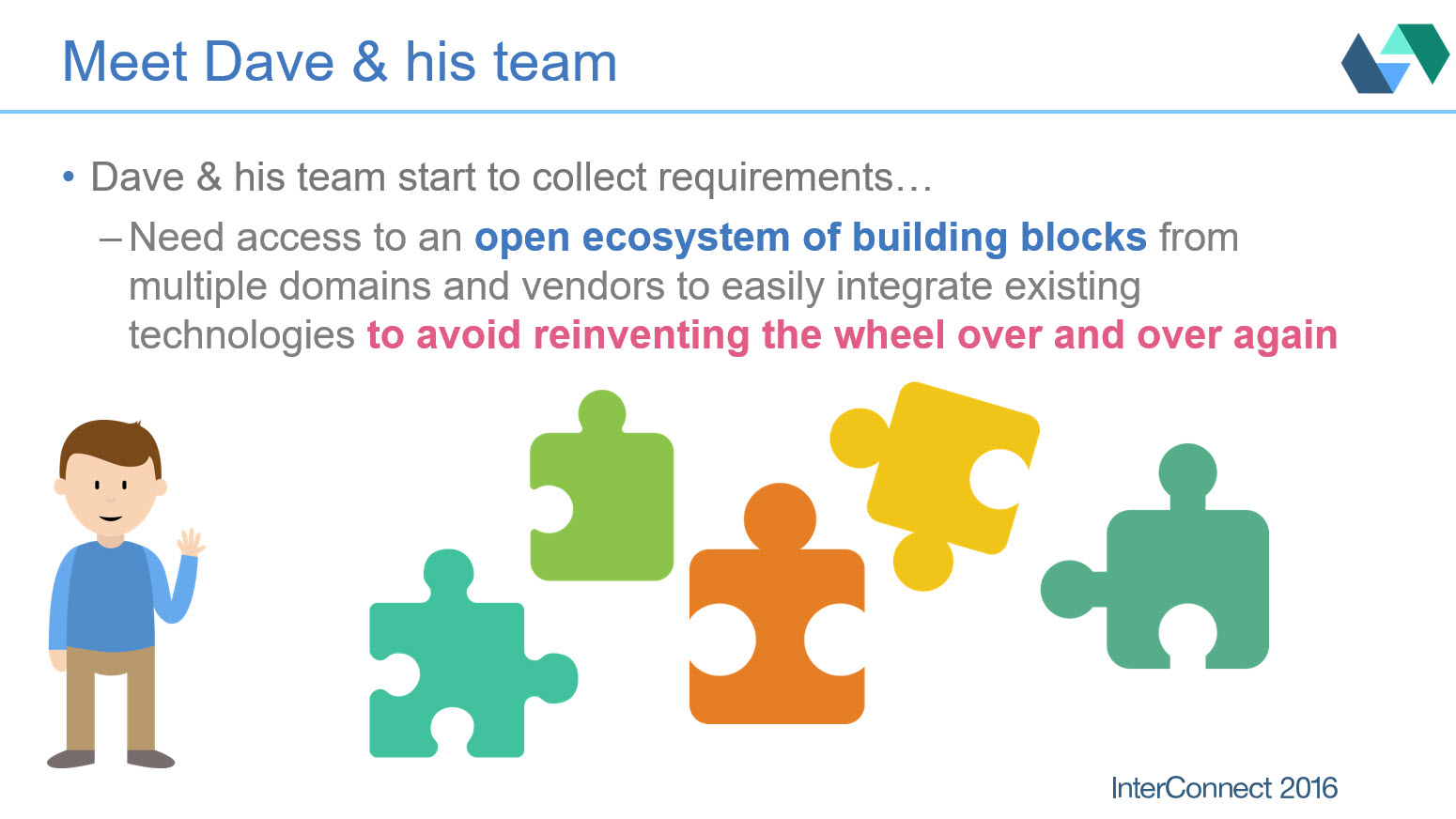 Dave wants the ability to stitch the individual building blocks together. OpenWhisk is able to do this without having to continuously change code. 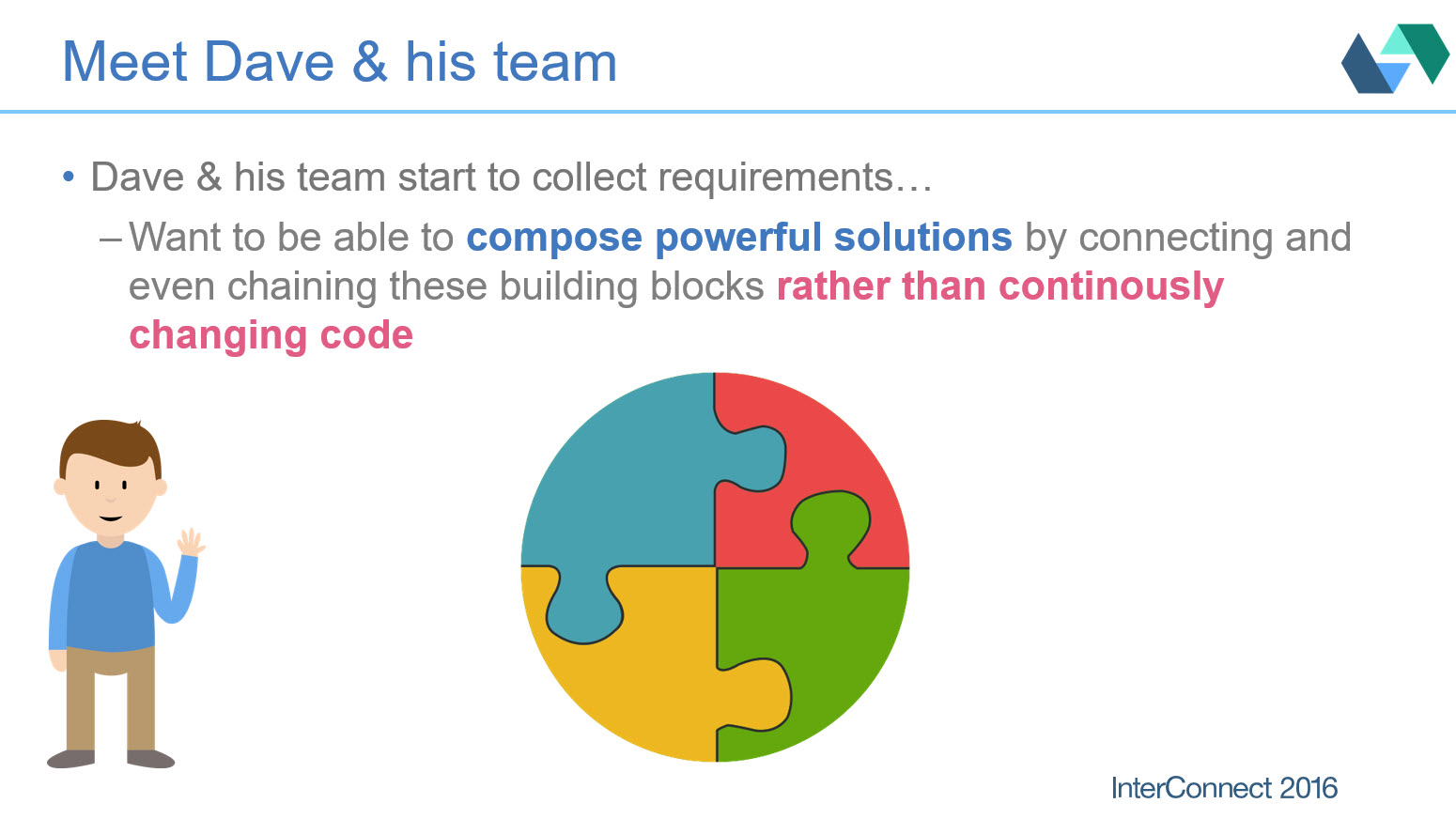 OpenWhisk allows Dave and his team to reuse and share building blocks that have been created previously, effectively removing any potential redundancies in development. 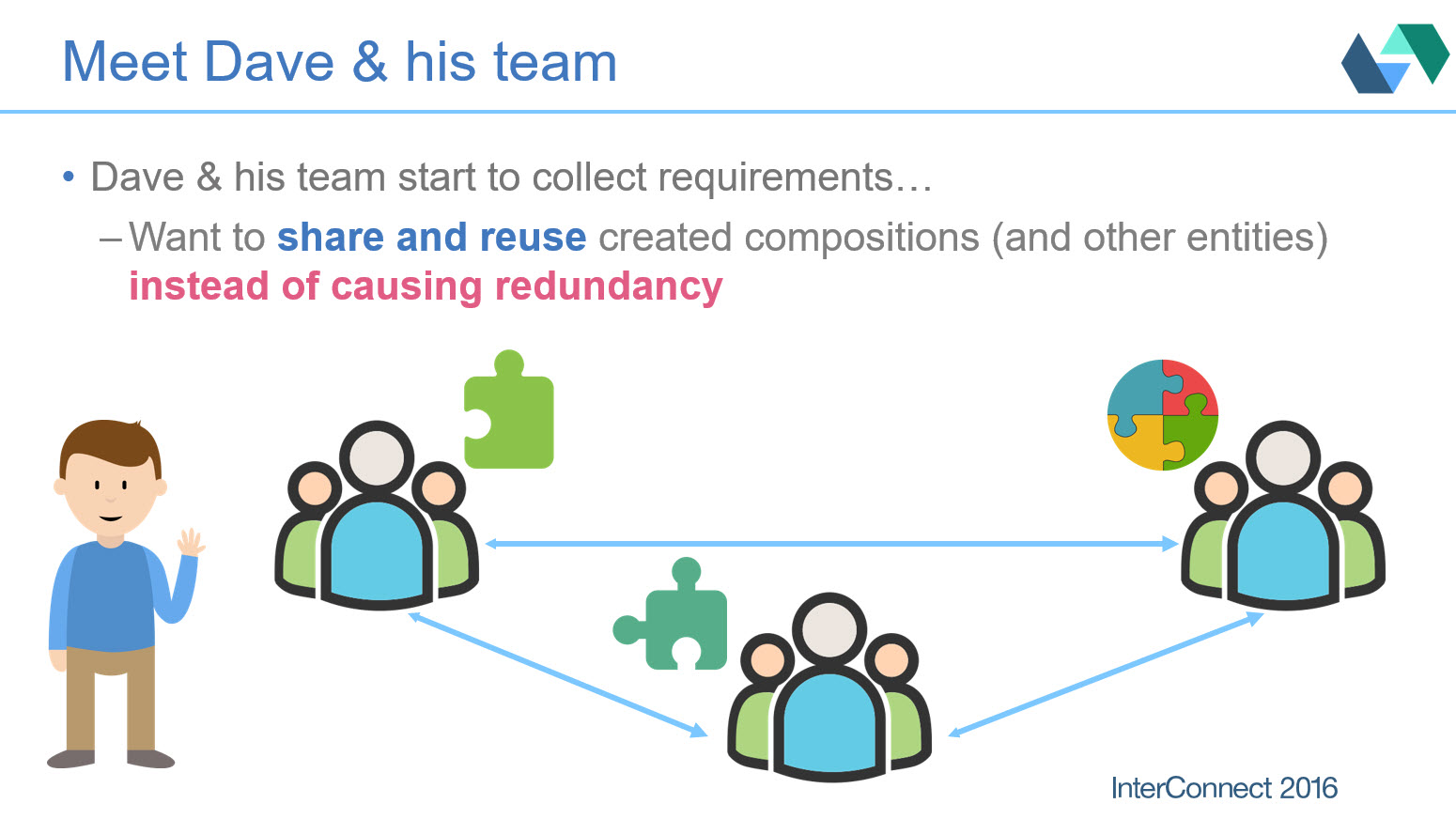 With the idea of building a mobile app, Dave and his team need a solution that allows them to outsource compute intensive tasks to a highly scalable cloud platform. OpenWhisk makes this easy by providing SDKs such as the Docker and iOS SDK. 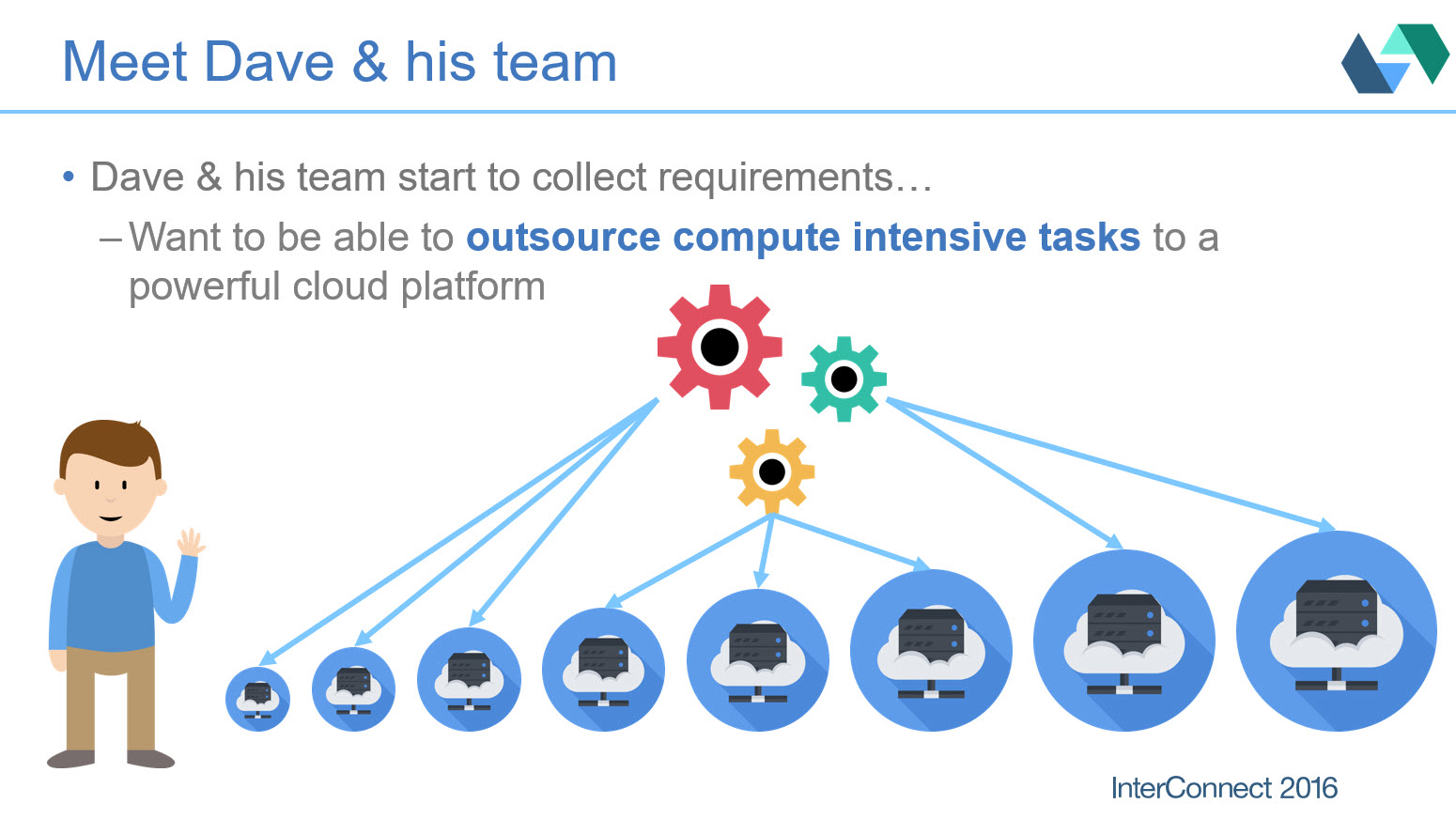 No activity, no charges

Dave and his team have struggled in the past with providers charging them for resources that aren’t always used and are sometimes idle. With OpenWhisk, they are charged only when code is actually being run.

“OpenWhisk is a solution where you only pay when code is run.” —Dr. Andreas Nauerz, IBM 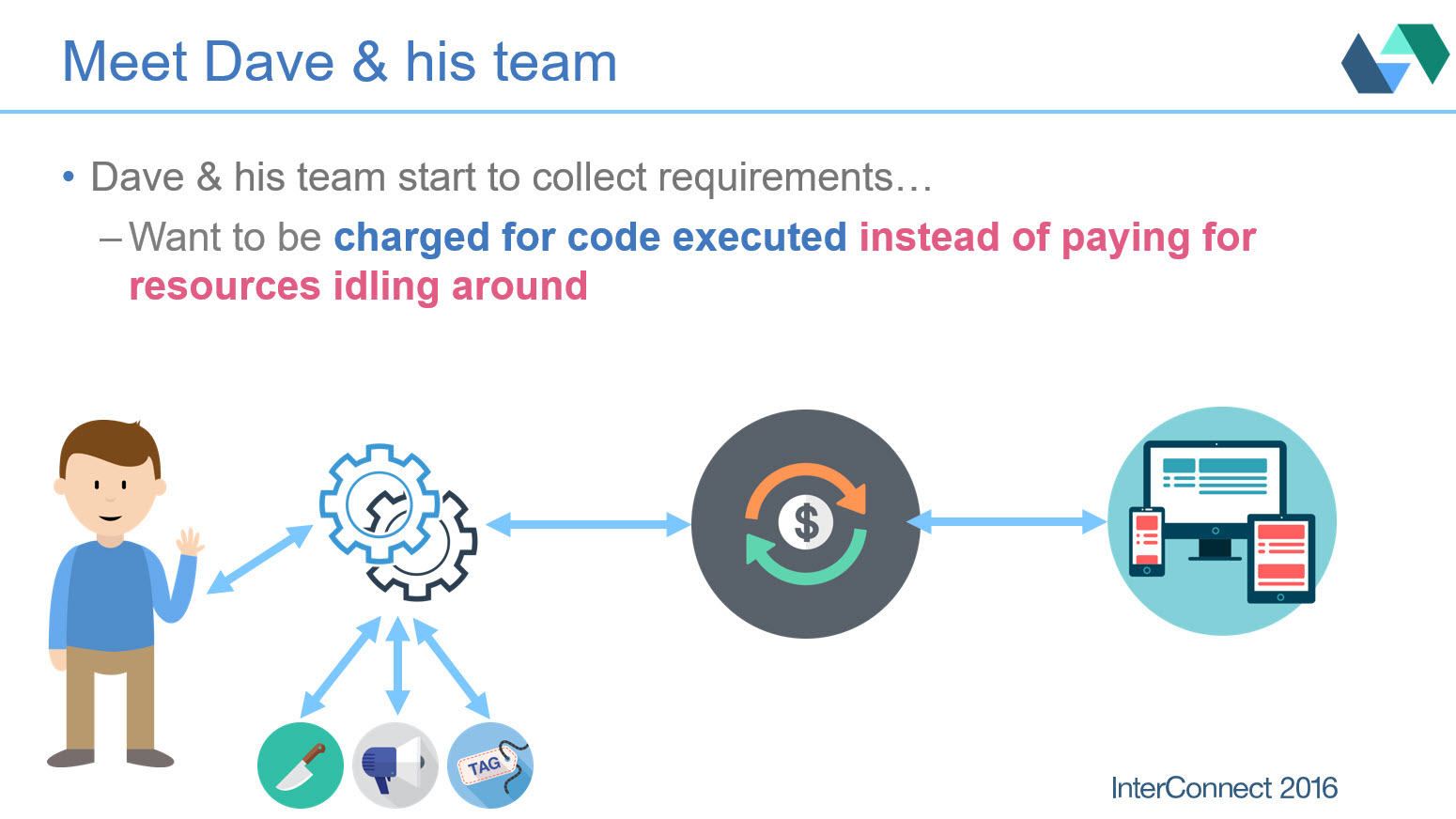 Dave and his team don’t want a solution where they can get vendor locked-in. With OpenWhisk as an open-source solution, they are able to maintain the freedom to be flexible. 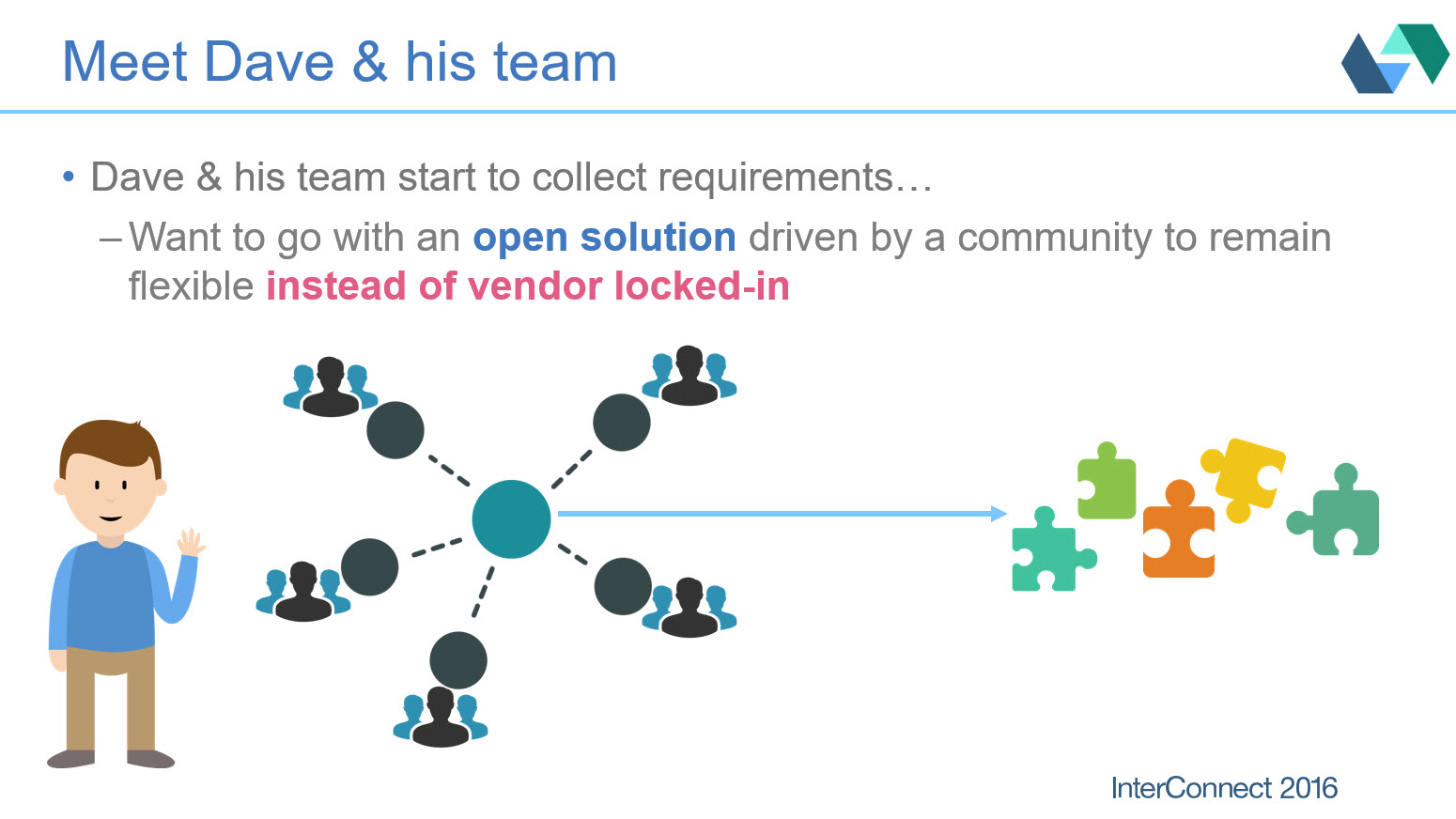 Getting an easy start

“How does OpenWhisk fit in the world of Bluemix?” asks Dr. Andreas. “OpenWhisk is not meant to replace the products that we already have in Bluemix. They are meant to coexist.” 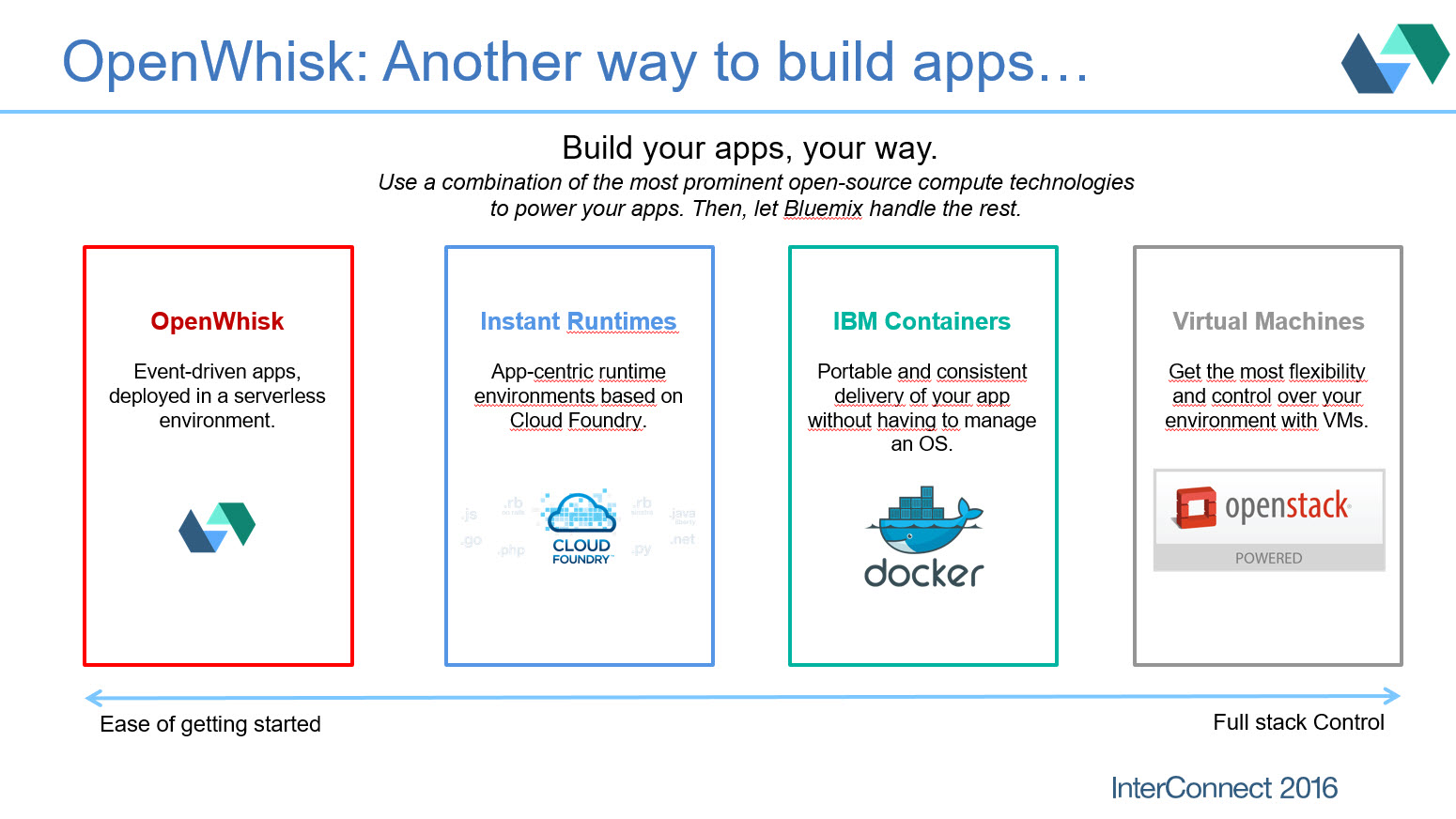 Virtual Machines give you the control and flexibility in your environment in choosing the CPU, memory, storage, and operating system. On the other hand, OpenWhisk is all about getting you started easy as a developer—allowing you to focus on code and not have to worry about the low-level details. 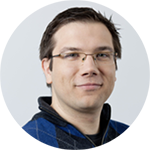 Dr. Andreas Nauerz is the Technical Program Manager for IBM Cloud at IBM Germany Research and Development. Aside from Bluemix, he is knowledgeable in software architecture, engineering, and development. He earned his master’s degree in computer science in the University of Hagen and his doctorate degree in computer science in Friedrich Schiller University of Jena.
The post is written by Carlo Gutierrez and edited by Alex Khizhniak.

Blockchain Bottlenecks in Finance, Healthcare, and Insurance
Next

What Is the Future of Blockchain?