by Alesia BulanokJuly 6, 2017
A 100-year-old insurance company takes a major step towards cloud-native development and CI/CD, iterating faster and releasing an MVP in just 28 days.
Why read this?
Use Case for Cloud Foundry:

Liberty Mutual understood that it is essential to focus on delivering value, relying on user stories. You also need to involve product owners and end users for feedback, making sure it is integrated into the development process in an agile manner.
Freeing developers from the operational aspects will help to inspire and empower them. At the same time, proper tooling, combined with test-driven development and pair programming practices, can help to build up technical excellence. Teams can become fully autonomous, if they include all the decision-makers involved in a project.

Cloud Foundry is deployed across three domestic data centers and one AWS region with two more regions to join later.

Liberty Mutual is a large global company specializing in property and casualty insurance. Based in Boston, Massachusetts, it employs over 50,000 people in 900+ locations worldwide.

Liberty Mutual was founded in 1912 after the state of Massachusetts passed a law requiring employers to protect their employees with compensation insurance. 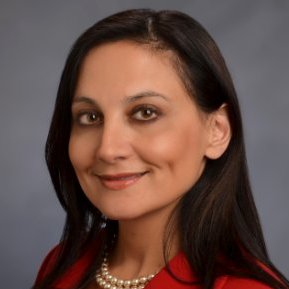 Security requirements and strict regulations of the insurance industry and the general tendency of business to manage risks in a traditional manner—i.e., through multiple audits and approvals—slow down both the decision-making and operational processes. This may hold a company like Liberty Mutual back from leveraging growth opportunities.

Over the century of the company’s existence, the world has changed a lot, with all the new technologies spurging around. The insurance industry has also felt the “wind of change” coming at it. Competition is getting serious as new players enter the market, bringing in both capital and innovative technologies. Novelty solutions appear where users can buy a policy with just a few clicks.

According to Mojgan Lefebvre, CIO at Liberty Mutual Global Specialty, the traditional waterfall way of developing software would involve months of requirements gathering and a year or more of development.

However, even having invested time and efforts into approvals and development, the company could not be sure the end users would be satisfied with the delivered product. Rather, things were more likely to turn the other way round.

“So, you can image that, by the time the end users saw the solution, it was usually not what they expected. Most of the times, it would have taken longer, was more expensive, and didn’t really do what they thought they were getting.” —Mojgan Lefebvre, Liberty Mutual

The expectations of customers and employees are different, too. They’ve all experienced the power of IT through the hi-tech gadgets they use in everyday life or using services like Amazon, Netflix, etc. 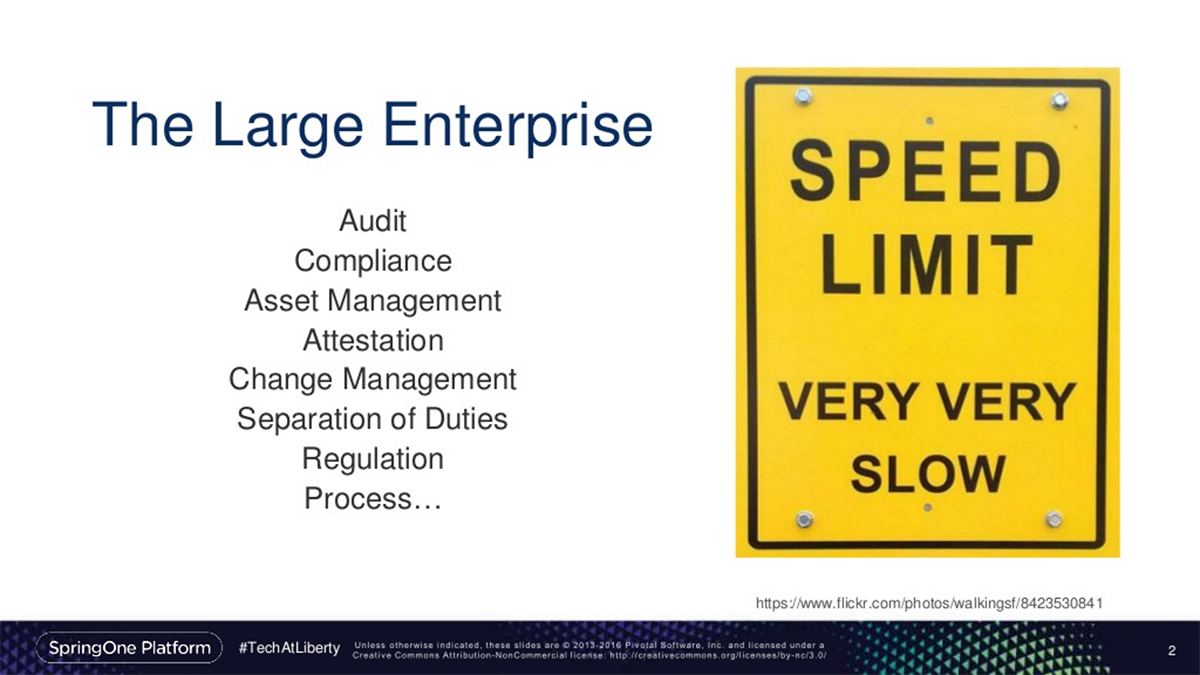 Why a large enterprise is slow to transform? (Image credit)

A lot of time-consuming paperwork was another problem to deal with. For Liberty Mutual, digitalization of its business processes was also to become an important part of its transformation, aiming at making its services more convenient for employees and customer-friendly.

So, Liberty Mutual came to understand that retaining its market positions required radical changes to the way they handle the company’s workflows, in general, and develop software, in particular. They started with IaaS, but then decided to go further.

“We knew we had to become a software company that sells insurance to survive in today’s competitive world.” —Mojgan Lefebvre, Liberty Mutual

The goals and challenges

Transformation of such a large-scale business as Liberty Mutual requires a lot of time and effort. By setting up the right goals, it was possible to envision the transformation roadmap in a long-term perspective. The objectives defined by Liberty Mutual were quite challenging: 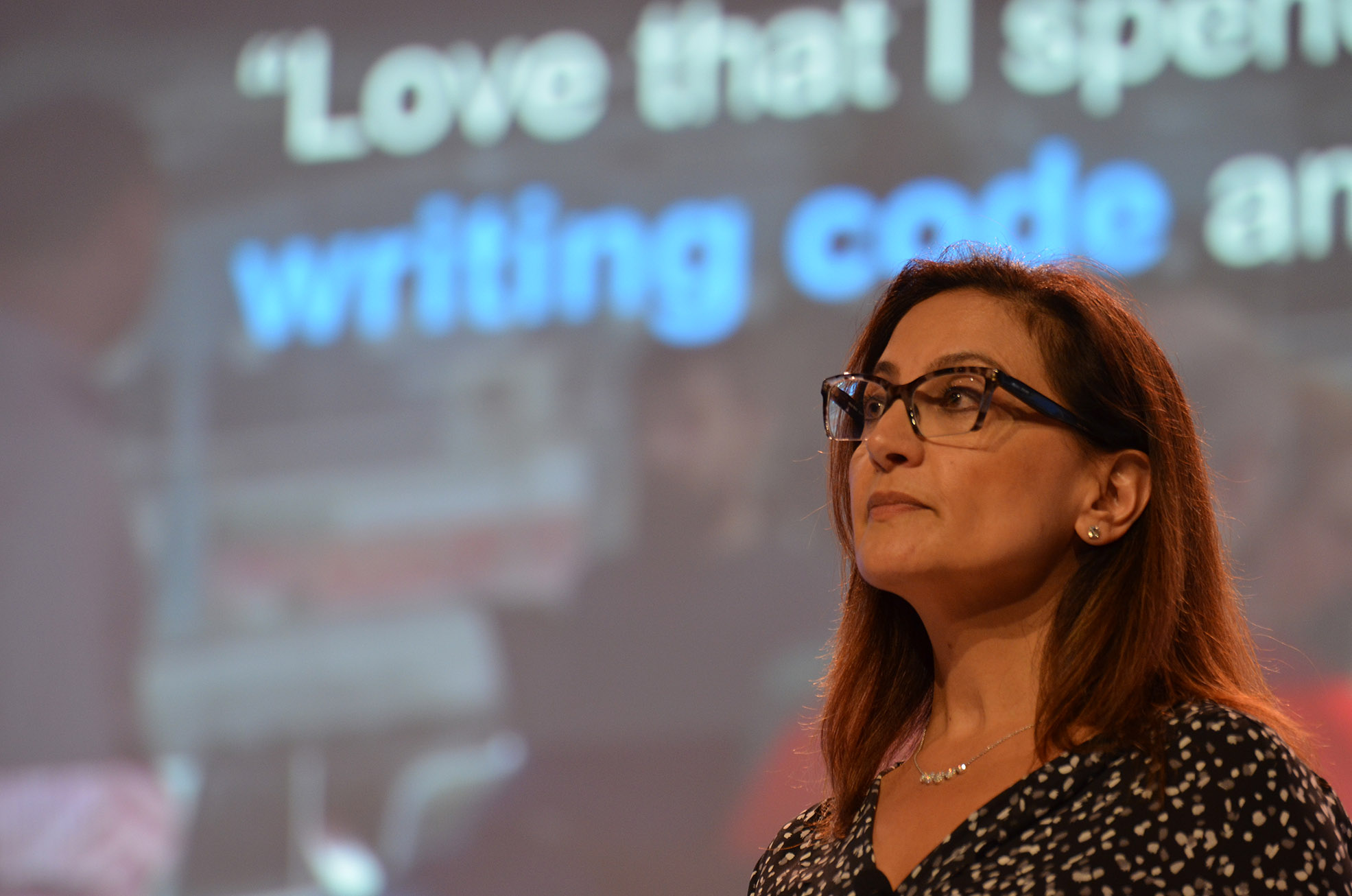 “It is only by doing, by experimenting, perhaps, sometimes, failing a little bit, but picking back up, learning from it and really leveraging all of these new methodologies and technologies that we can work towards the very aggressive objectives that we have set.” —Mojgan Lefebvre

Considering the company’s diverse legacy ecosystem, migration to a cloud raised certain issues. First of all, migration priorities had to be identified, which is easier when working with a greenfield project, but way more complicated with long-existing apps. Then, the company had to make sure a migrated development environment would interact properly with a production one, the active directory, and the apps. In addition, being a globally distributed company, Liberty Mutual had to pay attention to replication in different clouds and geographies. The company also wanted to minimize the risks of customer data being compromised, ensuring it is secured and protected.

Public cloud (AWS) was seen as the most preferable option, since it was cheaper to use in terms of total ownership costs. Liberty Mutual also wanted to be independent of infrastructure to the maximum possible extent, which Cloud Foundry definitely allowed for, according to Mojgan.

To achieve the transformation goals, the company has come up with the following takeaways:

The overall strategy was to develop in a cloud unless infeasible for some reasons.

“I’d say that automation and things like Cloud Foundry that actually help you to automate your pipeline are critical. You cannot do multiple releases or daily releases, if you don’t have those tools.” —Mojgan Lefebvre, Liberty Mutual 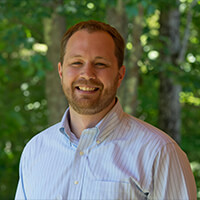 Another important contribution to the transformation process was the introduction of the Liberty Forge delivery platform (presented at SpringOne). According to Dave Ehringer, Director of Platforms at Liberty Mutual, the solution is meant to encompass all the aspects of building, delivering, and running apps in a cloud.

Simultaneously, developers get access to the required tooling and frameworks—everything from product management tools to issue trackers and internal services. Liberty Forge provides continuous delivery pipelines, which have been made the only path to introduce a change into an app, service, or infrastructure. The pipelines act as primary APIs to Pivotal CF.

Most importantly, the continuous delivery pipeline has reduced the commit to production time to 10 minutes. In addition, it provides transparency throughout the development process—from idea to production, plus traceability all the way back to user stories, code reviews, and pull request comments. This, no doubt, helps to create a sense of trust and safety about the products delivered in this way among business executives, developers, and users.

“If you look, ultimately, at what our product is to our developers, it is not them getting an account in Cloud Foundry; it is when they have a new app, we give them a pipeline.” —Dave Ehringer

Delivering a portal for underwriters

The opportunity to try out how well the new agile approach and the continuous delivery pipeline work for a real use case came in August 2016. The Australian underwriters were looking to enter a 240-million dollar market of accident and health insurance. This was a big chance for the company to grow, considering the pricing pressure and the severe competition, which have previously impaired progress. It was also important to make the tight deadlines and deliver an underwriter portal within six months, by the start of a new season in March 2017.

Liberty Mutual began with evaluating the available options. One of the possible solutions was to buy a vendor product. However, they found out that most underwriters thought ill of the products offered at the market and were using them out of no alternatives. Furthermore, adoption of a vendor solution was likely to take up more than six months and require substantial investments.

Another option was to try and go for a legacy platform. However, it was hardly worth it to invest vast amounts of money into an outdated technology to make it suitable for the project requirement.

Taken the above, building a new solution to match the exact needs of Australian underwriters seemed to be the best of available options. The idea was to get a minimum viable product ready within a few months, relying on agile practices, Cloud Foundry (Pivotal CF), and a totally new stack of technologies.

As the overall strategy was in place, a group of developers set off for Sydney in September 2016. They had talks with end users—the brokers—and worked with Pivotal Labs on the framing. Back in Dublin in October 2016, they got to actual coding, and it took them four weeks only to deliver an MVP and receive customer feedback. 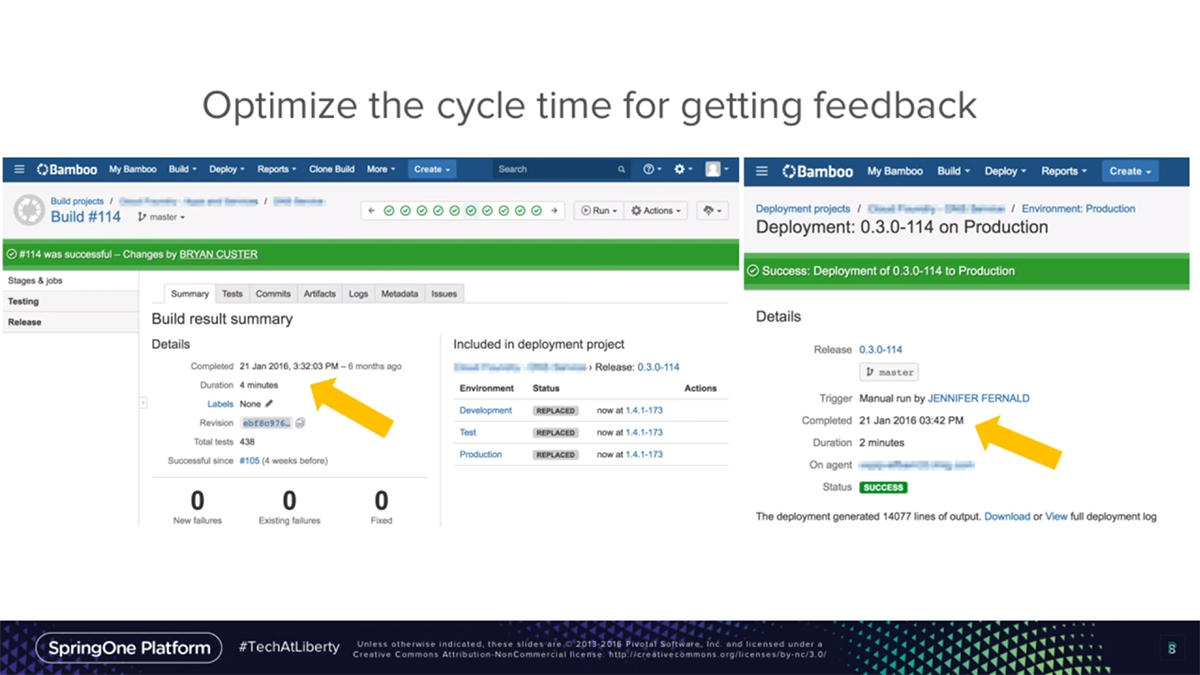 Then, developers continued building the product in iterations: integrated it with back-end systems and added underwriting, quoting, and rating capabilities. Just as planned, the fully functional underwriter portal was ready by March 2017.

The above is just one of the examples when agile methodologies and cloud-native development helped Liberty Mutual to deliver innovative solutions faster. For instance, the company launched an MVP of an app enabling users to buy motorcycle insurance in just 28 days and quickly released a new “cancel for any reason” travel product to market in Massachusetts and Arizona.

For Liberty Mutual, the project was a source of valuable experience and a way to “feel the vibe” of digital transformation. Measuring its success on the project, the company arrived at the following important conclusions:

Combining the agile approach with cloud-native development, Liberty Mutual delivered a software product that achieved the output of 200 quotes and 60 policies within the first month of its operation. In addition, the company learnt how to accelerate time-to-market, and totally transformed the release cycle. In all, there were made 16 releases within the project lifetime of five months. 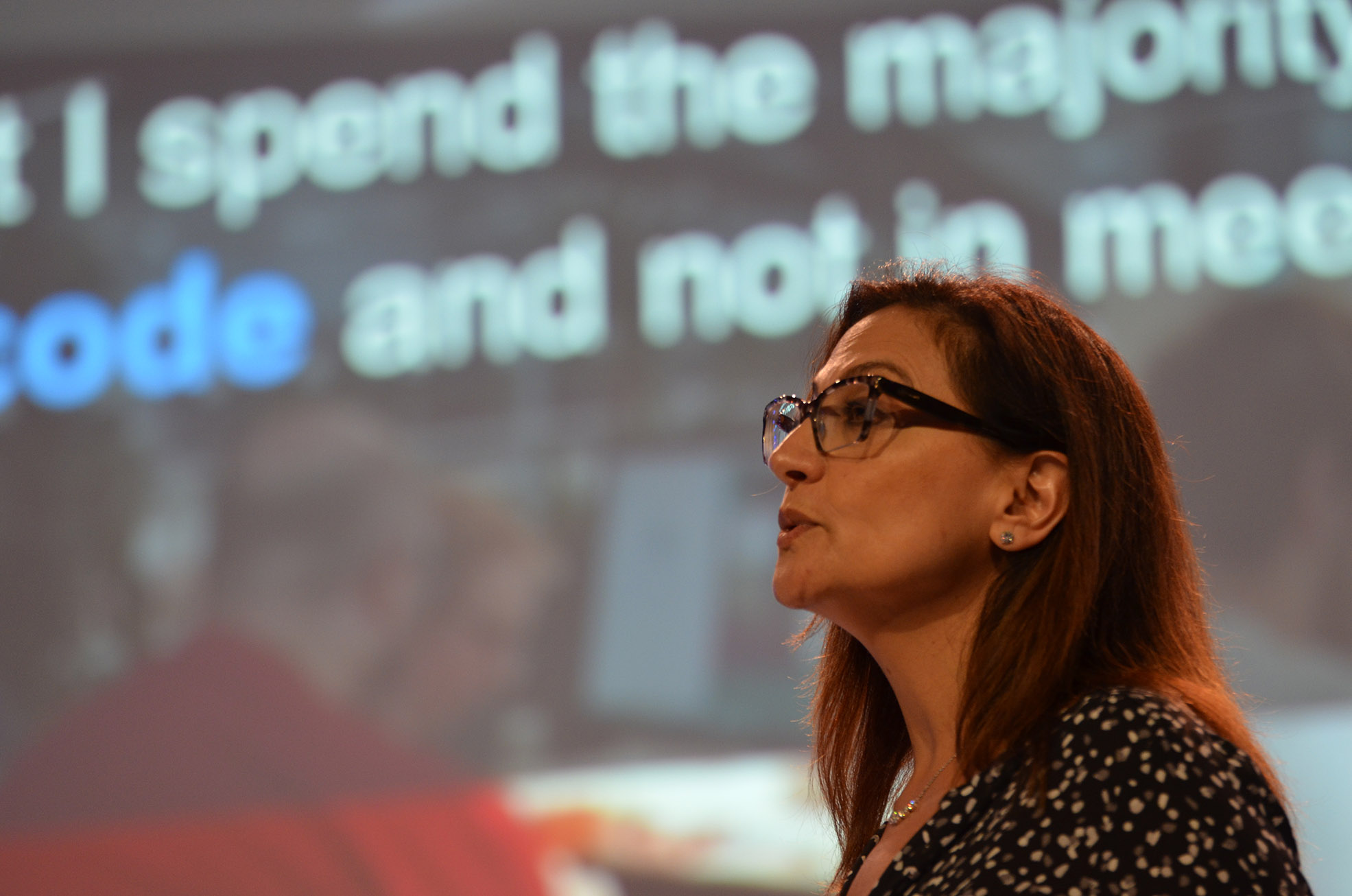 “In a world where we can’t predict the future and new competitors can come from many directions, we will win by being able to embrace change and reconfigure our priorities in real time.” —Mojgan Lefebvre, Liberty Mutual

The success is inspiring both for the company as a whole and its employees, which is a first step to forming a new mindset and building an environment sensitive to digital transformation needs. 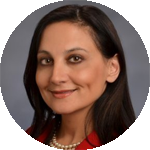 Mojgan Lefebvre is Senior Vice-President and Chief Information Officer at Global Specialty, Liberty Mutual. Being a passionate leader, she is committed to promoting diversity in the workplace and mentoring the next generation of executives. Mojgan is a lecturer at MIT Sloan School of Business, Simmons Leadership Conference, and Harvard Business School Dynamic Women in Business. In 2015, she was honored as one of Women to Watch in Science and Technology by Boston Business Journal. 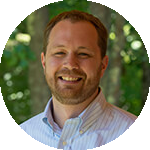 Dave Ehringer is responsible for establishing the strategy and priority for the platforms, products, and services within Liberty Mutual’s Enterprise Technology Services and provides technical leadership for various cloud analytic services and cloud-native transformation practices. Dave is an active open-source contributor. He holds a master’s degree in Computer Science from Boston University and a BA in Economics and Computer Science from Middlebury College. 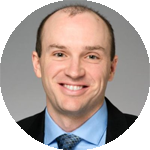 Chris Bartlow is IT Senior Director at Liberty Mutual Insurance who has been with the company since 2005. He graduated from Indiana University with a bachelor’s degree in Computer Hardware and Electronics Technology and holds a master’s degree in business administration from Kelly School of Business (Indiana University). Now, he is responsible for a team of over 160 people, supporting critical application environments that manage nearly $9 billion in annual revenue.
The post is written by Alesia Bulanok, edited by Sophie Turol and Alex Khizhniak. 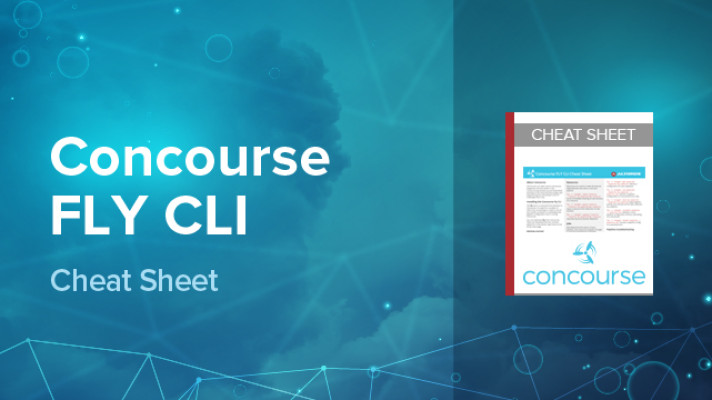 Blockchain at Walmart: Tracking Food from Farm to Fork