A A A
Home page » Use Cases » Intel Addresses 43,000 Mobile Devices with OpenStack and Cloud Foundry
Contents
2218
0 Comments

by Roger StrukhoffJuly 3, 2015
The chip manufacturer has virtualized 80% of its servers and standardized on open-­source Cloud Foundry as its PaaS solution.
Why read this?
Use Case for Cloud Foundry:

Major manufacturer: key component to build a massive private cloud, while moving in the direction of hybrid cloud.

There are 147,000+ employee devices being provisioned.

Intel has its own massive internal IT needs, and considers Cloud Foundry as a key component to meet them.

(Note: This use case is based on presentations by , IT Principle Engineer, Cloud Computing, Intel, and , Sr. Technical Member, Cloud Services Engineering at Intel.)

Intel’s journey to the cloud

Intel operates 64 data centers worldwide, with 80% of its servers now virtualized. It has standardized on open-­source Cloud Foundry as its PaaS solution, after an evaluation process that began in 2012.

The company’s employees use more than 147,000 devices, including more than 43,000 handheld devices, with 57 mobile applications having been developed. Intel’s cloud journey embraces a private-­cloud approach in which the company aims to benefit from cloud computing for its high internal-­only workloads.

Intel wishes to consume its own capacity before seeking external sourcing. It also cites the high switching costs due to interoperability among public-­cloud providers as a reason to prefer private cloud.

Cloud­-aware apps are a challenge for all types of cloud, the company acknowledges. However, its approach using Cloud Foundry as its PaaS provides dynamic, flexible, and scalable service delivery at reduced cost. Key aspects include:

There are additional reasons behind the strategy, and a commitment to moving from an innovative idea to production service in less than a day, as shown in the graphic below. 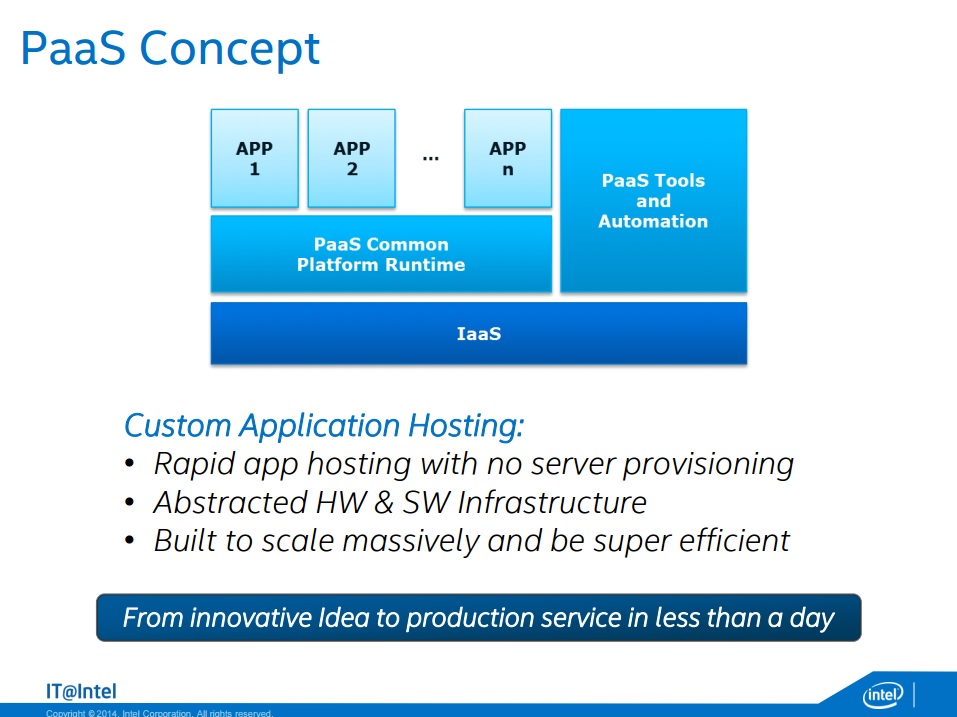 Intel’s goal is to build a federated, hybrid cloud that will be interoperable and open. The company is working on automating as many tasks as possible, abstracting the complexity of creating complex systems from developers.

Ultimately, Intel would like to be able to go from idea to production in less than a day. The company is also building a unified control panel for monitoring and managing all cloud implementations, multiple clusters in various regions, etc.

Intel’s overall cloud stragey embraces the XaaS spectrum: notably, SaaS for large­-scale, standard processes; and a common IaaS control plane. Its Enterprise Adoption Roadmap is shown in the graphic below. 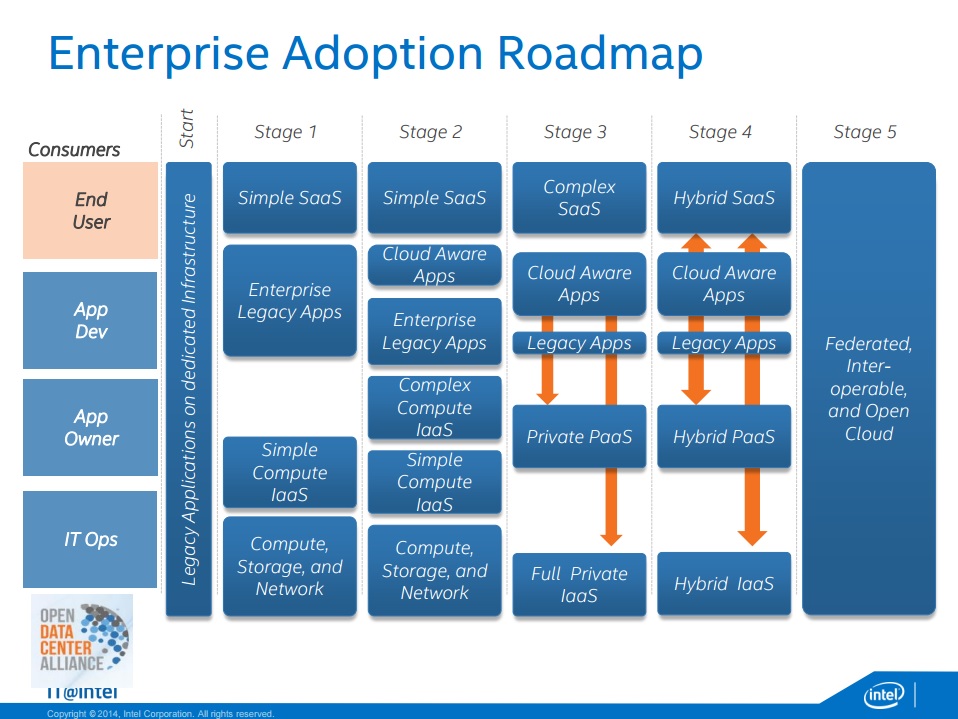 With Cloud Foundry, Intel took a Resource Utilization strategy in which it was determined to expand on its OpenStack IaaS success. It employed technical and user evaluations as part of the process of ultimately choosing Cloud Foundry. The company focused on three other vectors, with the following results:

The results validated the requirement to support high app development diversity, with .NET, Perl, SQL Server, Java, and Python all mentioned prominently in the survey results. There was also a high interest in databases (especially NoSQL), as well as interests in SOA, Business Intelligence, and Mobility.

Intel’s PaaS is deployed over OpenStack Havana. As noted above, there are 57 applications running on the platform. BOSH is the main tool used for deployment. Intel also uses Puppet, since there are some enterprise-level integrations in place.

The PaaS is available along with other resources through a portal, which provides a GUI for deploying and managing apps, creating and using spaces, etc. The CLI option is still available as well. Users can choose between IaaS and PaaS options depending on the level of control they would like to have over their infrastructure.

Additionally, provisioning looks like this, with the use of BOSH: 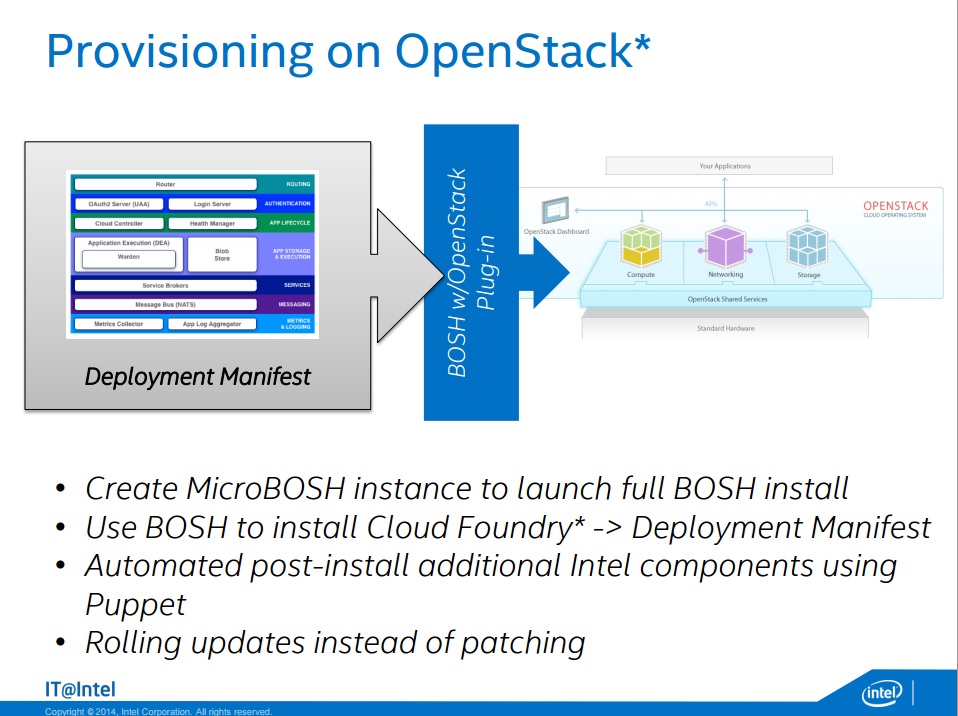 In the subsequent pilot program, developers sign up and create spaces, download tools or use a web portal, deploy apps in “one push,” and manage apps instead of infrastructure.

A usage study of 16 owners (with the 57 apps among them) found interesting results as well:

Intel is ultimately on a direction toward Hybrid Cloud. The company’s strategy emphasizes a few key points:

Intel will extend the value of enterprise private IaaS through the Cloud Foundry PaaS, which in turn accelerates application deployment and promotes cloud application design principles.

Here are some useful resources on GitHub on this topic:

1) Catherine Spence, IT Principle Engineer, Cloud Computing, Intel appeared on a panel with James Watters at the Cloud Foundry Conference in 2013. Her comments begin at 1:12.

2) Catherine Spence also presented on this topic at the OpenStack Summit in Paris in November 2014.

3) In this video from the SV CF meetup, Sachin Ashtikar uncovers some details about the role that Cloud Foundry plays in Intel’s cloud strategy (starting from 11:15):

GE Software Getting 2,000x Performance Increase with Cloud Foundry
Next