by Carlo Gutierrez, Sophie Turol, and Alex KhizhniakApril 2, 2018
The shift to a cloud platform gave Boeing 100x times faster infrastructure service delivery and a 6x increase in asset utilization.
Why read this?
Use Case for Cloud Foundry:

With a view to stay competitive on the market and survive another 100 years, Boeing adopted Cloud Foundry—lying at the core of its Digital Transformation Environment (DTE).

Business or Technical Result:
Lessons learned:
What else is in the stack?

Boeing was founded in 1916 with its headquarters now located in Chicago. It is one of the largest aerospace companies in the world with about 150,000 employees in over 65 countries. The leading manufacturer of commercial jetliners, as well as defense, space, and security systems has over 20,000 contracts with suppliers and partners globally. Boeing reported $94.6 billion in revenues for 2016.

In 2017, Boeing set the industry record for the most commercial airplane deliveries with 763 orders completed. This was also the sixth consecutive year that the company delivered more than any other airplane manufacturer.

The need for a digital accelerant

Boeing celebrated its 100-year anniversary in 2016. Being a pioneer in many aspects of the aerospace industry, the aircraft manufacturer can now boast that its 7-series family of airplanes dominates commercial flights. Furthermore, Boeing is a major service provider to NASA.

To get an understanding of what a colossus Boeing is, one can rely on the figures provided by Kenneth Swope at the PDT Europe 2017 conference. The company has around 3,400 processes with 4,100 applications on 5,100 servers using 14,000 integrations. These are affected by 900 changes annually, impacting over 100,000 users with 12 copies of the data. Boeing stores more than 20 petabytes of data across seven countries.

With intent to survive another 100 years, Boeing recognized the need to digitally transform if it wanted to retain its positions as a market leader. This meant the company needed to widen the span of system engineering, simulation, and prediction to cover each stage of the product life cycle—as outlined by David Bernert, IT and Data Analytics Chief Architect for Boeing, at the GPDIS 2017 forum.

The company aimed at achieving this through adopting emerging technologies, including digital twins and blockchain. (Previously, we have written how Boeing employs blockchain and the Internet of Things to improve asset management, enable provenance of aircraft components, and establish predictive maintenance.)

Niki Allen of Boeing backed up this idea at the SpringOne Platform conference held in December 2017. “Just the proliferation of sensors alone has changed the way we collect, process, analyze, and decimate data,” she said. “Multiply that across our entire fleet and install base, and that is a lot of data, but there’s value in that data.” According to Niki, a 787 Dreamliner alone will generate about a terabyte of data in a single flight.

To pursue its goal of digital evolution, Boeing had to adopt a new technology that will serve as a business transformation catalyst. “We have to create our own digital factory that we can use as an accelerant to help lead us through this transformation,” emphasized Niki. The accelerant could be a platform that would serve as a mainstay for distribution of data, processes, and infrastructure in a way that drives innovation. 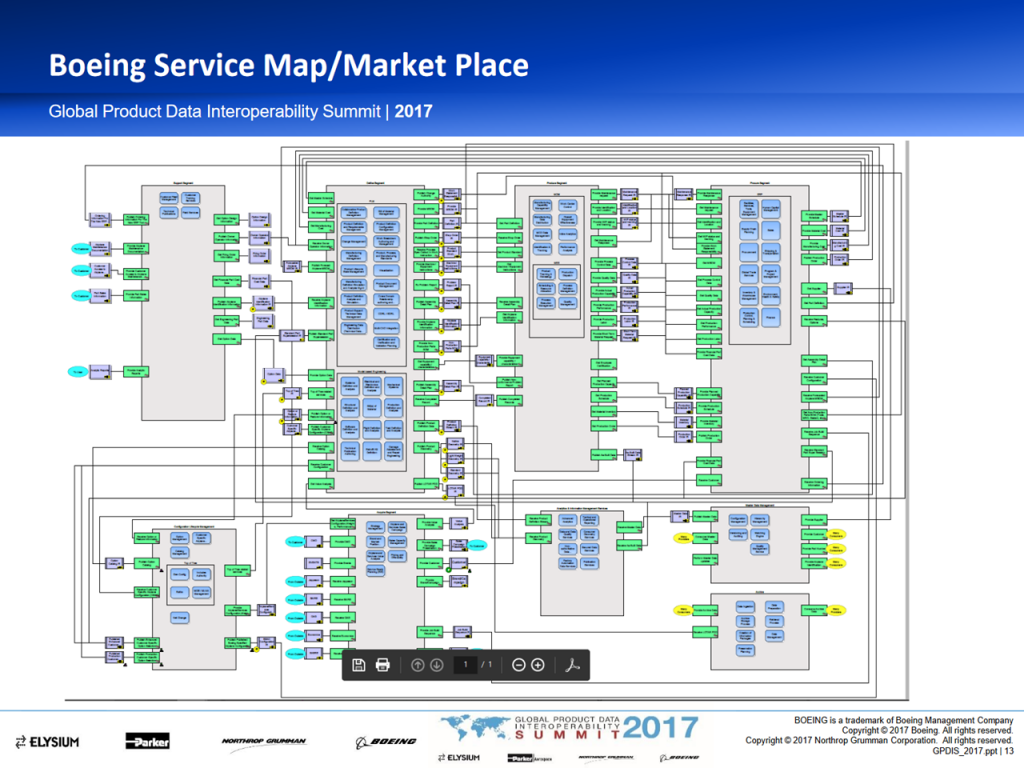 The accelerator would need to be secure, which meant the inclusion of virus protection, security controls, and multi-factor authentication.

As Niki noted, a company like Boeing wasn’t born digital, there was a host of complexity, legacy systems, architecture, point-to-point integrations, etc. that had to be addressed by the accelerator.

“Technology is literally evolutionizing and changing the way that we do business. If we leverage this correctly, that’s how we survive another hundred years.” —Niki Allen, Boeing

In October 2016, Boeing came up with an initiative to create the Digital Transformation Environment (DTE). The building blocks behind DTE comprised infrastructure and a comprehensive technology stack to build innovative services, as well as a project management office to established seamless processes.

The initiative was approved by Boeing’s IT Finance Competitive Assessment Group in November 2016, given strategic priority, and the first investment request went through the new process. DTE also had a 5-year projection plan and analysis, which included the benefits of licensing, sourced labor, and compute resources, as well as IT labor productivity savings. Underlying DTE as a technology core, Cloud Foundry was chosen to accelerate development and delivery. 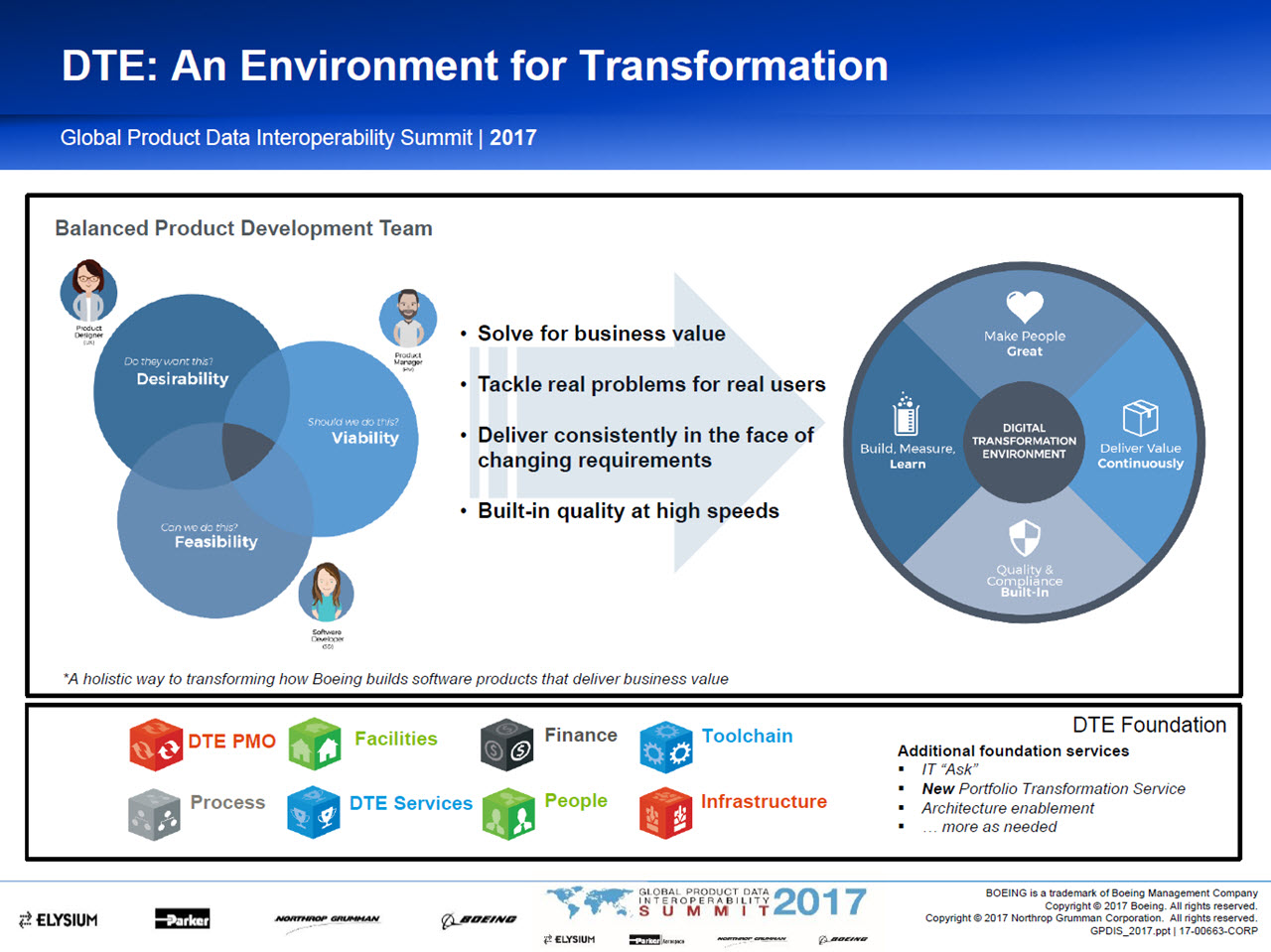 Within the DTE initiative, Boeing also wanted to shift its service-oriented architecture (SOA) towards the microservices approach. This was necessary for building flexible, independently deployable systems, as well as for efficient scaling over time. 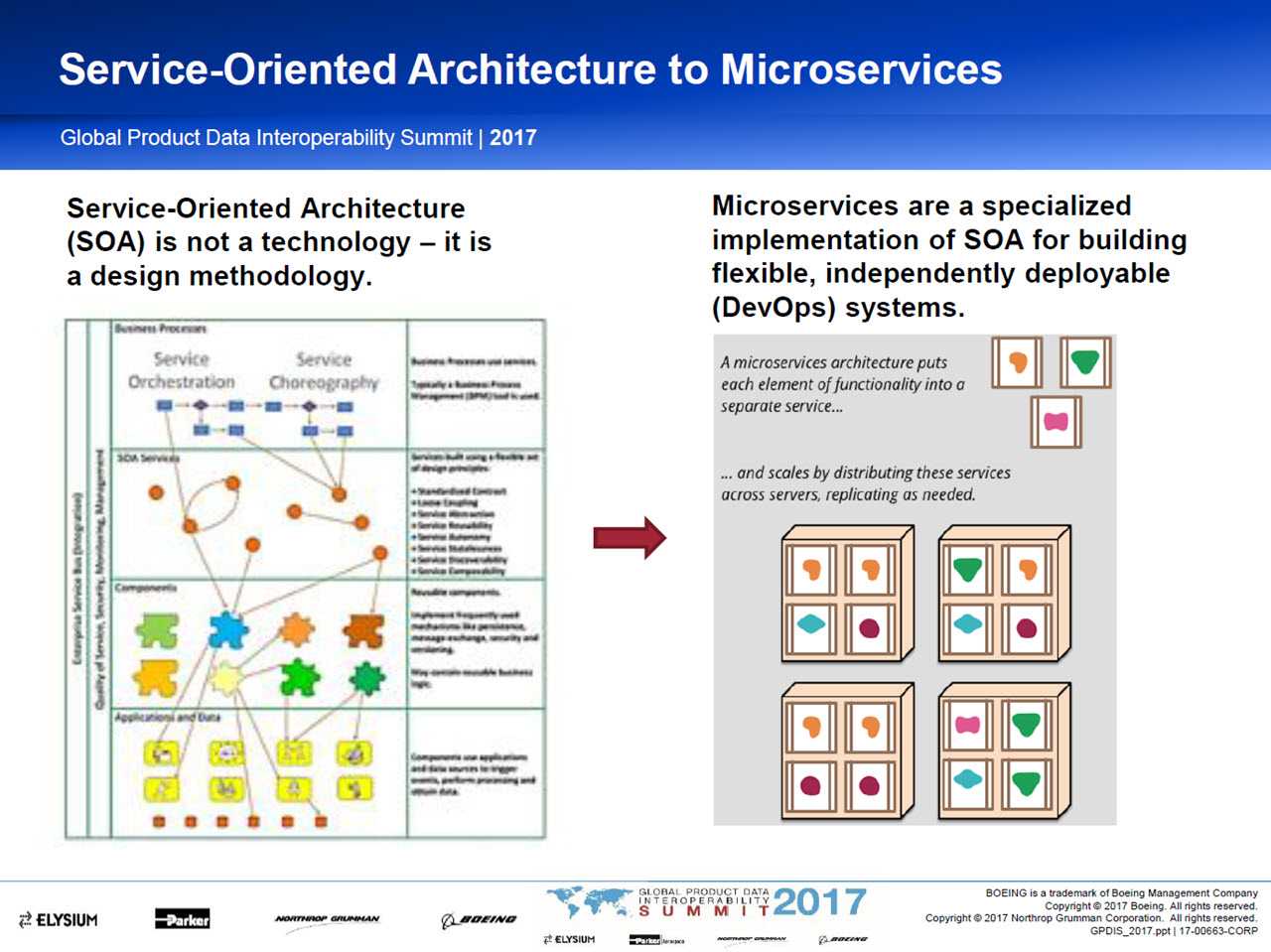 Such a move from a SOA-based model would help to faster innovate and fail, get rid of stagnant concepts, while retaining those that maximize value.

With the Cloud Foundry adoption in motion, the next step was to make sure everything would remain secure. James Coppock, Cloud Specialist at Boeing, detailed how the initial security concerns were addressed in a dojo, where the team worked alongside people from Pivotal, Stark & Wayne, and Altoros.

Security issues were resolved using add-ons on BOSH runtime-config. To add security controls, the company made use of the compliance client included in the Windows Server 2012 R2 corporate image. The client, however, had problems reporting out. “We had to implement an API to connect to it,” said James. “That was good, but we had to use certificates to authenticate and encrypt it.”

For virus protection, developers at Boeing utilized the McAfee’s antivirus program. “We had a corporate image of Windows Server 2012 R2,” noted James. “That image already comes with McAfee.” According to James, McAfee was scanning the VCAP folders, which prevented Diego cells from building. Exclusions had to be set to resolve the problem. Similarly, just like the compliance client, the virus scanner had issues connecting outside the network and to the McAfee ePolicy Orchestrator. This was also fixed using the same API. 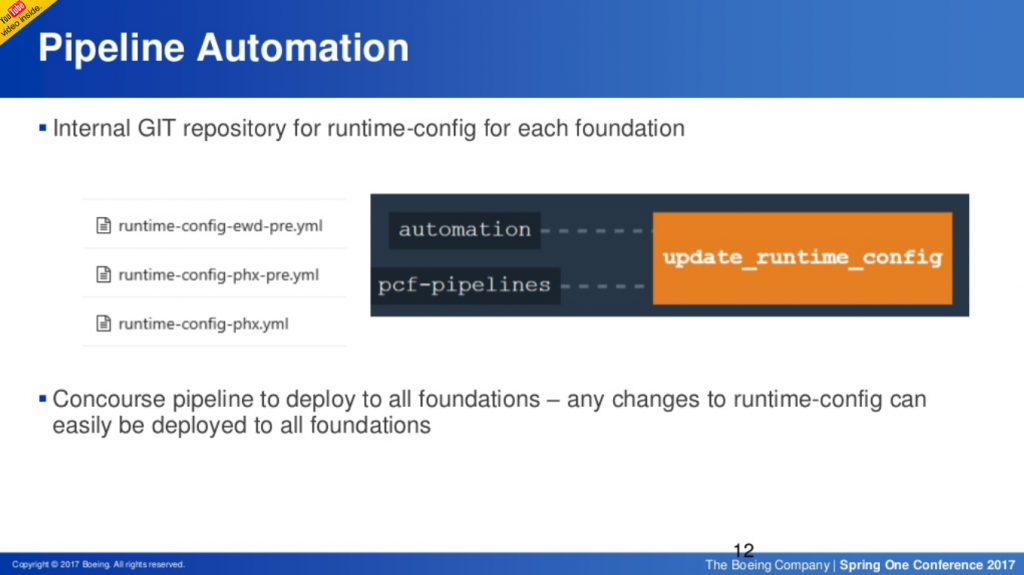 Multi-factor authentication was then enabled by creating Windows jump boxes that were separated from the Pivotal Cloud Foundry platform (PCF). “You have to log on using your multi-factor secure badge,” said James. “Once you’re logged onto that jump box, then you can connect to the servers underneath with SSH.”

While setting up the security, engineers figured out how to enable fine-grained filtering with runtime-config by excluding classes of systems. 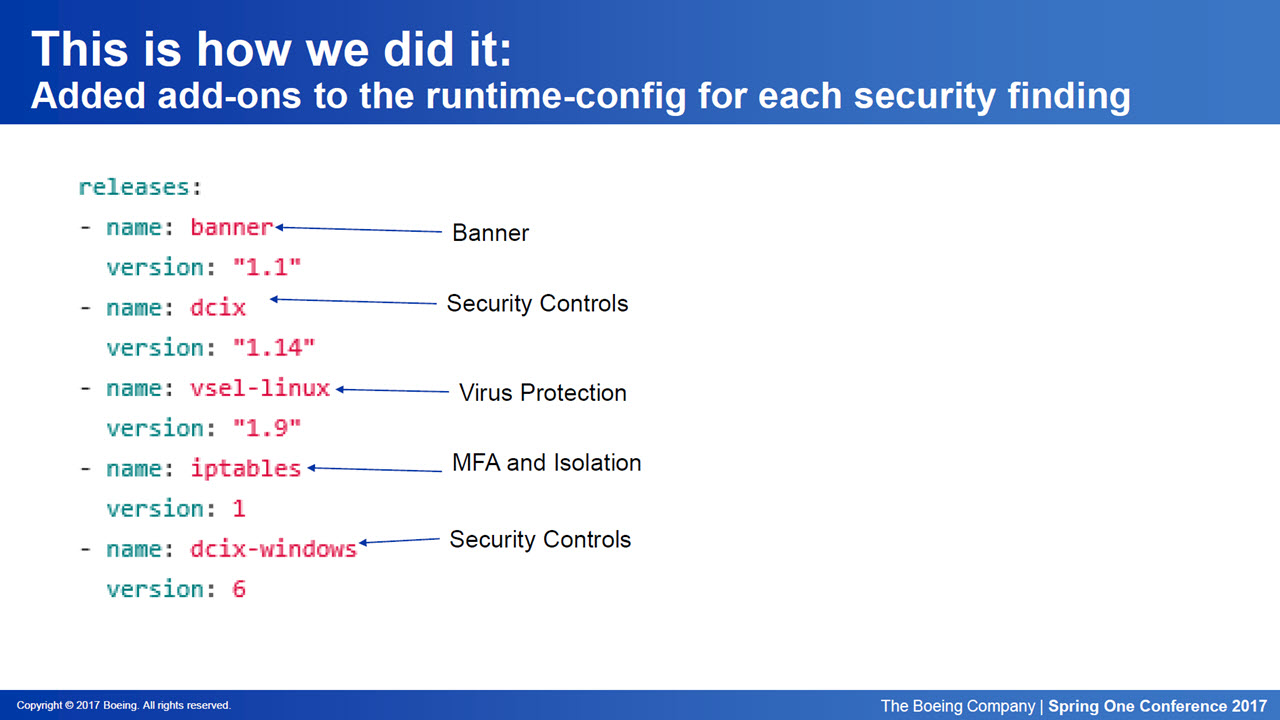 “With Cloud Foundry, they have something called the runtime-config, so that you can apply specific stuff to Windows or Linux and to all of the systems.” —James Coppock, Boeing

The results so far

With the ongoing DTE initiative, development at Boeing has already seen significant improvements:

“The move to cloud alone has paid dividends for us,” said Niki. “We’ve got a 100x times faster infrastructure service delivery.” 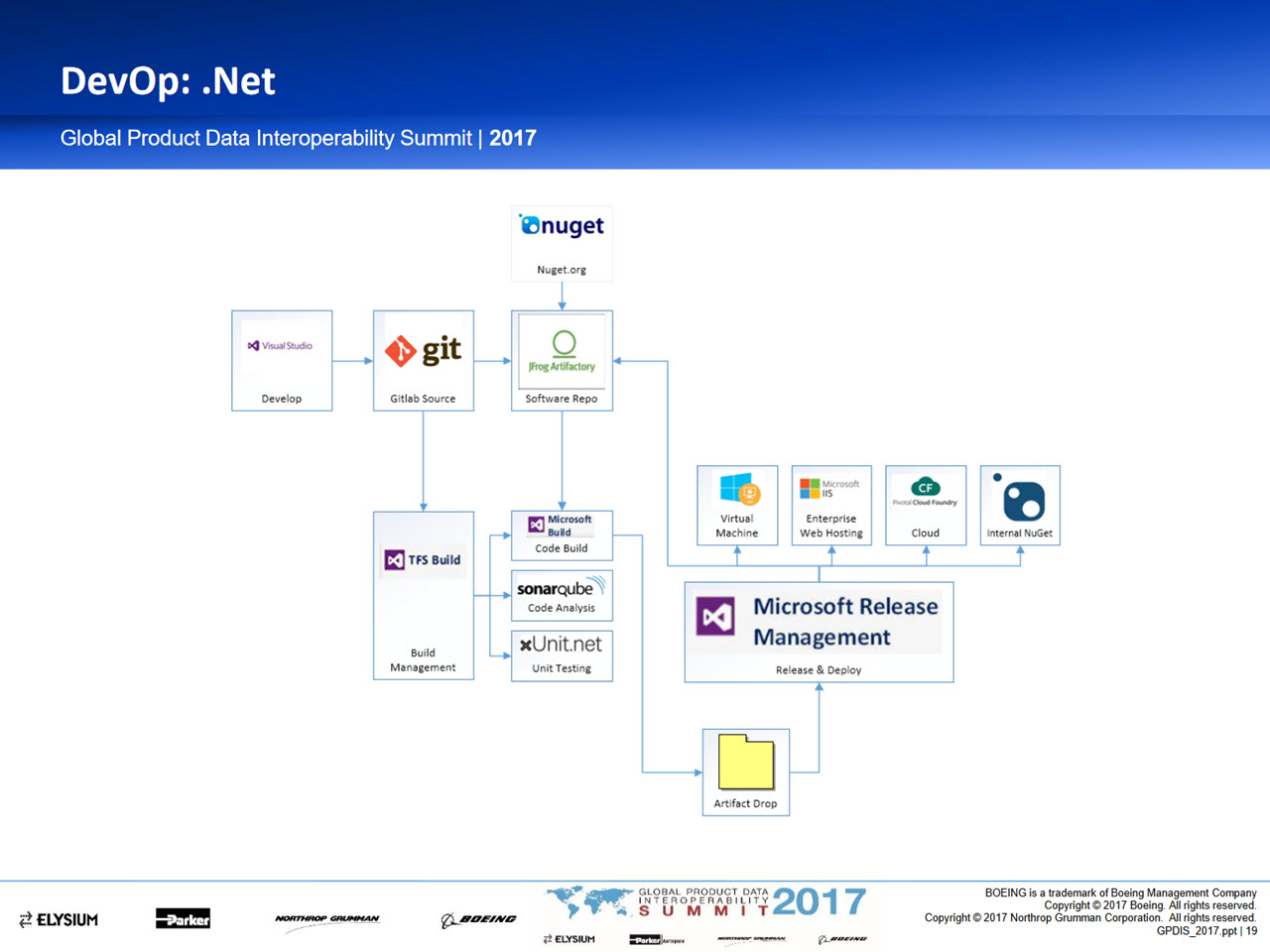 The DTE has significantly accelerated the growth of software development and delivery as Niki explained. “We’ve got hundreds of projects in our opportunity pipeline, and that list grows every single day. We’ve got a backlog of nearly 80 that we’ve qualified and are preparing to enter the DTE. We have several, which we’ve already pushed through production, including one that recently helped with a significant airplane sale.”

More value delivered by the DTE, as David Bernert mentioned, included the release of an avionics tool and automation of the toolchain and the Cloud Foundry platform end-to-end. In addition, Boeing moved to a user-centric approach, which allowed the company’s IT teams to be in tune with the business requirements. The adoption of the cloud and open source software has also enabled Boeing to save on the cost of operations and licensing.

According to Niki, the significant change was not only in the development process, but in the people and the culture at work. As she put it, “to actually witness a cultural shift happening has been the most rewarding part of this journey.” 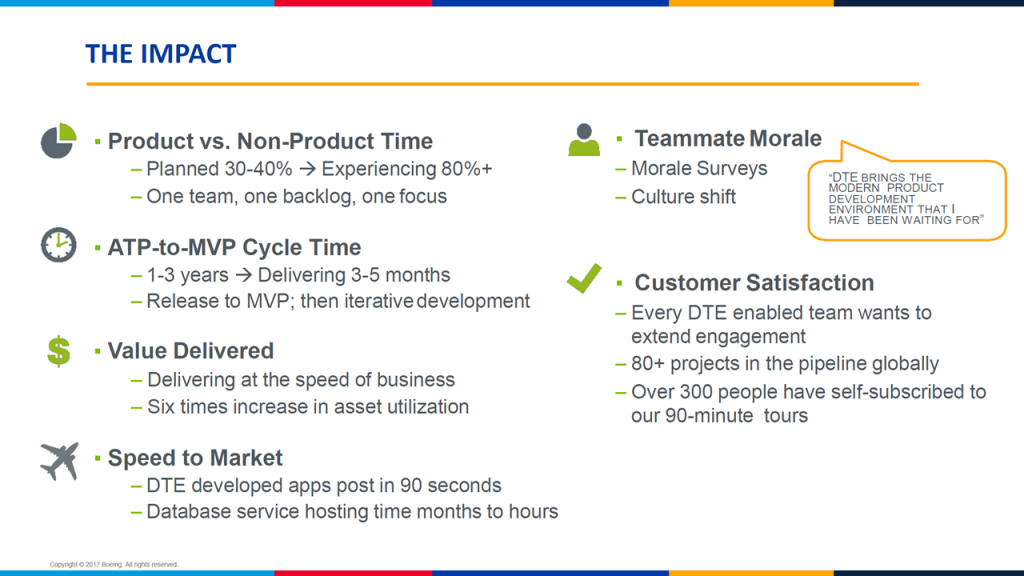 The results achieved under the DTE initiative

“People are excited to work on this. There’s a renewed sense of accountability and transparency. We have had over 300 folks from across all of our programs and business sites, visiting the DTE to see what’s going on there.” —Niki Allen, Boeing

Ted Colbert, the company’s CIO, did a podcast on digital transformation. According to him, the strategy is all about “identifying opportunities to create value for business, driving productivity, and leveraging the rest of the organization in a way that drives the transformation.” The shift to the cloud is just one more step for Boeing in realizing this vision. So, the company is actively investing into trending technologies.

As we see, the company is persistent in its intention to stay here for another 100 years (or even more) as an innovator and leading service provider.

In this video, James Coppock details how his team addressed security concerns with Cloud Foundry. 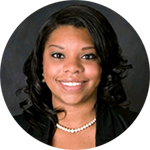 Niki Allen is Executive Director of the Office of the CIO at Boeing. In this role, she serves as the Chief Operating Officer for Boeing’s Information Technology and Data Analytics organization which includes over 6,500 employees. Niki is responsible for strategy alignment and execution, driving and organizational change. She also handles process and procedure management, strategic sourcing, external technical affiliations, and key project leadership. 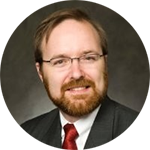 Kenneth Swope is Senior Manager at Boeing. He leads the Business Capability Integration organization at Boeing Commercial Airplanes for Business Architecture and Change. Kenneth started with Boeing in 1994, following his graduation from the University of Missouri with a BS in Mechanical Engineering and BA in Physics from Central Missouri State University. As a manufacturing research engineer, he supported the company’s Wichita facility in manufacturing process improvements and advanced numerical control technologies. 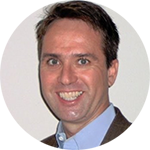 David Bernert is IT Chief Architect at Boeing. He leads the company’s initiative around Digital Business Transformation with his teams working on Second Century Enterprise Systems. David is also the Boeing IBM Executive Representative. He joined Boeing after more than 34 years with Hewlett-Packard. 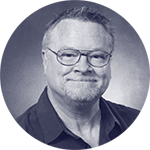 James Coppock is a Cloud Specialist at Boeing. He is actively involved in the organization’s adoption of Cloud Foundry. James has been working in IT for over 20 years. He specializes in Windows and .NET Framework/Core on Pivotal Cloud Foundry.
This blog post was written by Carlo Gutierrez, Sophie Turol, and Alex Khizhniak.

Boeing Improves Operations with Blockchain and the Internet of Things
Previous

KONE Monitors 1.1M Elevators and Escalators with IBM Bluemix and Watson IoT
Next