A Panel on Ruby on Rails: How to Start a Career in RoR? 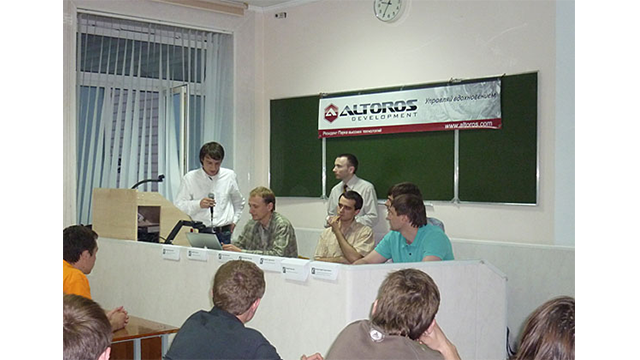 by Alex KhizhniakJune 22, 2010
IT experts and newcomers gathered together to discuss the future of the technology, as well as share tech expertise.

The future of RoR development

On June 22, 2010, Minsk Institute of Management, Belarus Ruby on Rails User Group and Altoros held a roundtable on the future of Ruby-on-Rails (RoR) development and career success in IT. A number of Ruby-on-Rails experts who were involved in the first RoR projects in Belarus attended the seminar and shared their expertise.

During the roundtable, graduates and RoR novices had an opportunity to ask mature developers about the demand for the technology in Europe, the ways to find new projects, the employment opportunities, and how to start actually developing. 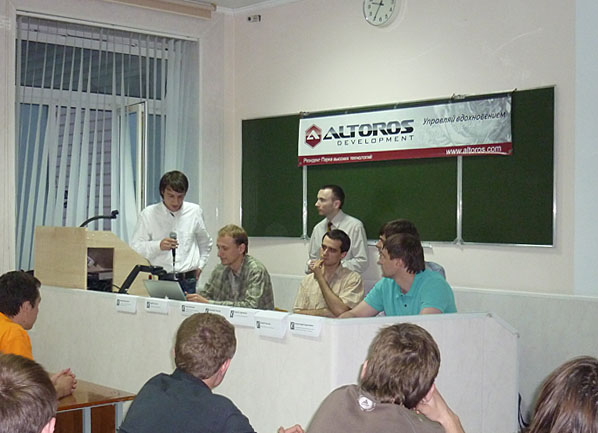 “Unfortunately, it is next to impossible to tell everything worth knowing about Ruby-on-Rails development in a single event. However, this panel proves that young specialists have a keen interest in new technologies. Taking into account that many of them would like to become a Ruby-on-Rails developer, the future of the technology in Belarus and Europe, in general, is inspiring.” —Yury Velikanau, Altoros

The event started with the presentations that covered the Ruby language and the Ruby-on-Rails platform basics. Sergey Sergyenko of Belarus Rails User Group spoke about the history of Ruby and Rails development, as well as about their founders. Sergey took a closer look at the peculiar features of Ruby and how it differs from other languages.

After Sergey dwelled on the closure feature and presented some examples in Ruby, Yury Velikanau, the head of the Ruby-on-Rails development department at Altoros, took his turn. To make things clear, he explained that Java was mentioned only to draw a comparison between the technologies, but not to prove that any of the mentioned technologies is worse than another. Yury drew attention to the peculiarities of the Rails platform, told about the most popular projects done with RoR, and answered a number of questions.

How to create a simple blog

After a 15-minute break, Yury Velikanau demonstrated in real time how to create a blog with the possibility to post comments. He also made several mistakes on purpose to show how debugging is implemented in Ruby-on-Rails development. However, to have enough time for the roundtable, some of the unanswered questions were postponed until the end of the event and the afterparty.

Ruby on Rails perspectives for IT newcomers

During the roundtable, each of the experts talked about his path to Ruby-on-Rails development and how he started his career in IT. Also, Alexander Gedranovich of Minsk Institute of Management answered a question about what a student should do to find a good job after graduating from a university, and what should be done to have Ruby on Rails included in the curriculum of the universities in Belarus.

The experts of the roundtable, with Antono Vasiljev, the former CTO of Onliner.by, and Dzmitry Naumau, an entrepreneur, discussed the demand for Ruby-on-Rails developers in Belarus and abroad. Yury Velikanau emphasized that it is not the working place, but the level of proficiency that defines the career success of an IT specialist.

The experts discussed the advantages and disadvantages of working at the office, being a freelancer, or working remotely, and they touched upon ways of finding new customers. The questions at the roundtable also concerned the level of proficiency required for working with the Ruby-on-Rails framework, the possibility for a QA engineer to become a RoR developer, the future demand for Ruby-on-Rails developers, the influence of the global financial crisis in the customer’s country on Ruby development rates, and many others.

At the end of the roundtable, each of the experts provided recommendations for the participants who would like to start working with Ruby on Rails. Specifically, Sergey Sergyenko advised listeners to get involved in a promising project and to do one’s best to blend in with the team. Dzmitry Naumau suggested starting a corporate career, gaining the required experience, and to consider launching one’s own business in the meantime.

Antono Vasiljev, during his turn, recommended finding an appealing open-source project written using Ruby on Rails and to create new modules for it to gain experience, while communicating with more proficient developers. Yury Tolstik noted that “persistence and desire lead to success.” Alexander Gedranovich remarked that the key to success is to never lose focus. Finally, Yury Velikanau supported the idea that experienced colleagues can “teach better than books.”

The organizers of the event promised that the first Ruby-on-Rails classes in Belarus will start this autumn. After that, everybody who wanted to talk more continued the discussion in one of the bars.

The Challenges of Moving Data to a New CRM
Next