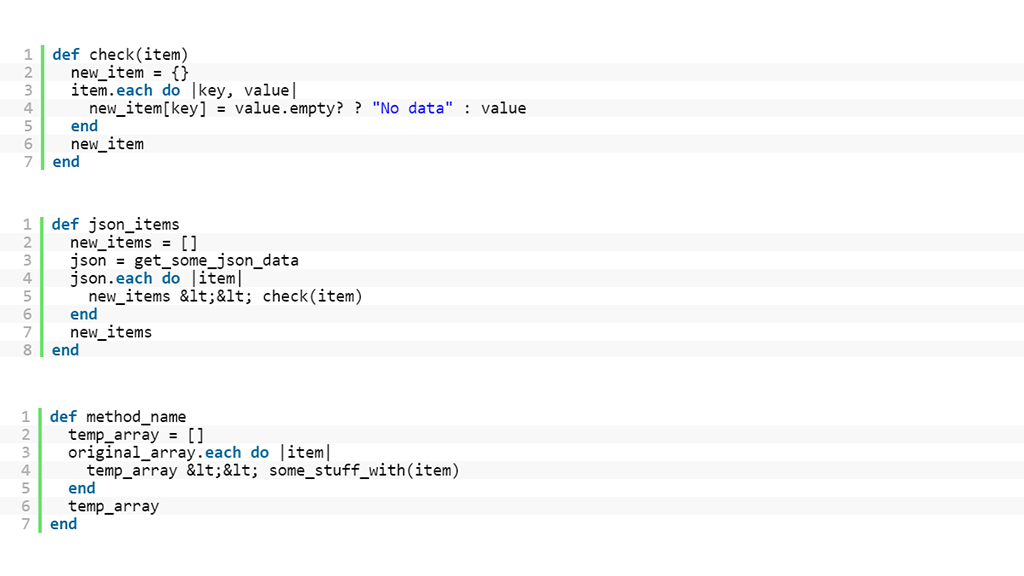 by Emiliano CoppoJuly 13, 2013
Learn how check(item) and check(item) methods help to optimize Ruby code, increase its readability, and simplify support.

Everybody who deals with Ruby knows that collections can be tedious. However, thanks to Ruby, we have a large arsenal to deal with them! This post overviews two methods that can greatly simplify your development routines. You will get real-life examples that demonstrate how to optimize the code, as well as some tips to increase code readability and enhance system support in the future.

Recently, I’ve written a small JSON parser of the Flickr public feed, so I’ll use some methods of that module as examples. Basically, the module had to fetch a JSON object returned by the Flickr API and parse it to a Ruby JSON object checking some validations. This kind of functionality doesn’t take more than a dozen of Ruby lines, but it’s a good example to achieve our goal.

We’ll focus on two methods of the module:

We’ll also skip all the URL encoding and some validation stuff to focus on the iterative methods.

First, lets take a look at the check method. The goal of this method is to loop inside a item (a hash) and update it on the fly. A valid approach could look as shown below.

This code certainly works, but it also has some design issues like a temp (and unnecessary) hash.

As Ruby developers, we should take care of the Ruby API in such cases. The code bellow can be good as a start point, but it does not take long to realize that it “smells.” So if we look at the hash doc we can find an alternative and a prettier solution with the update method:

Now it’s time to explore the json_items method. As previously stated, this method should return an array of hashes that must be validated with our check method. A possible code could be as illustrated below.

I really hate this repetitive code snippet, it’s very common when you want to create an array based on some other one.

Thanks to Ruby, we have an awesome method for array objects when we have to deal with this kind of snippets: inject. This awesome method allows us to make magical things. For instance, if we want to know the average word length of a document or a string, we can do as follows:

This can be done more concisely with inject.

You can also use inject with hashes. When running inject on a hash, the latter is first converted to an array before being passed through. By applying it to the json_items method, we get:

So, with inject, we no longer need to instantiate a temp var, which allows us to build a new array on the fly and have a more concise and readable code.

Inject inherently projects a set of collection values to an unique value. In other words, it resembles a many-to-one function. For this reason, inject has a well-known alias—reduce. In maths and other programming languages, it also has other names like fold, accumulate, aggregate, and compress. This kind of functions analyzes a recursive data structure and recombines through use of a given combining operation the results of recursively processing its constituent parts, building up a return value.

Therefore, the json_items example is not the best example to use inject, because we’re trying to achieve a one-to-one conversion. In such cases, we should use other methods, such as map or collect, that fit better with what we’re trying to do.

For more details on hash update, please check out this documentation and this overview. More isights into enumerable inject are available in these docs, as well.

Ruby provides us awesome methods, we should use them wisely and follow the Ruby philosophy. So, I encourage you to employ these methods to make clearer and beautiful Ruby apps!

Emiliano Coppo is interested in developing Ruby and Ruby On Rails Applications. He is proficient in JavaScript, HTML, CSS, jQuery, jQuery UI and Mobile, PostgreSQL, MySQL. Emiliano describes himself as a passionate coder, always trying to learn new technologies and looking for challenging projects. Find him on GitHub.

This blog post was written by Emiliano Coppo with suggestions and tips from
Sergey Avseyev and Joaquín Vicente.

Things that I Hate as a Web Developer
Read More
201

Speeding Up Ruby Tests
Next