A A A
Home page » Tutorials » TensorFlow in the Cloud: Accelerating Resources with Elastic GPUs
Contents
933
0 Comments

TensorFlow in the Cloud: Accelerating Resources with Elastic GPUs

by Sophia TurolJune 6, 2017
Learn how to maximize the usage of computational powers when training a model with TensorFlow and Elastic GPUs.

Combined with GPUs, TensorFlow poses a powerful instrument for deep learning. However, it may still be difficult to switch between CPUs and GPUs—both in a local environment and in the cloud. One of the sessions at TensorBeat 2017 explored the ways to address the associated challenges and to maximize the usage of computational powers with Elastic GPUs.

Why would one even need to switch between CPU and GPU? The obvious reason to employ GPUs for machine learning is to accelerate the process of model training. Still, everything comes at a price, according to Subbu Rama of Bitfusion. 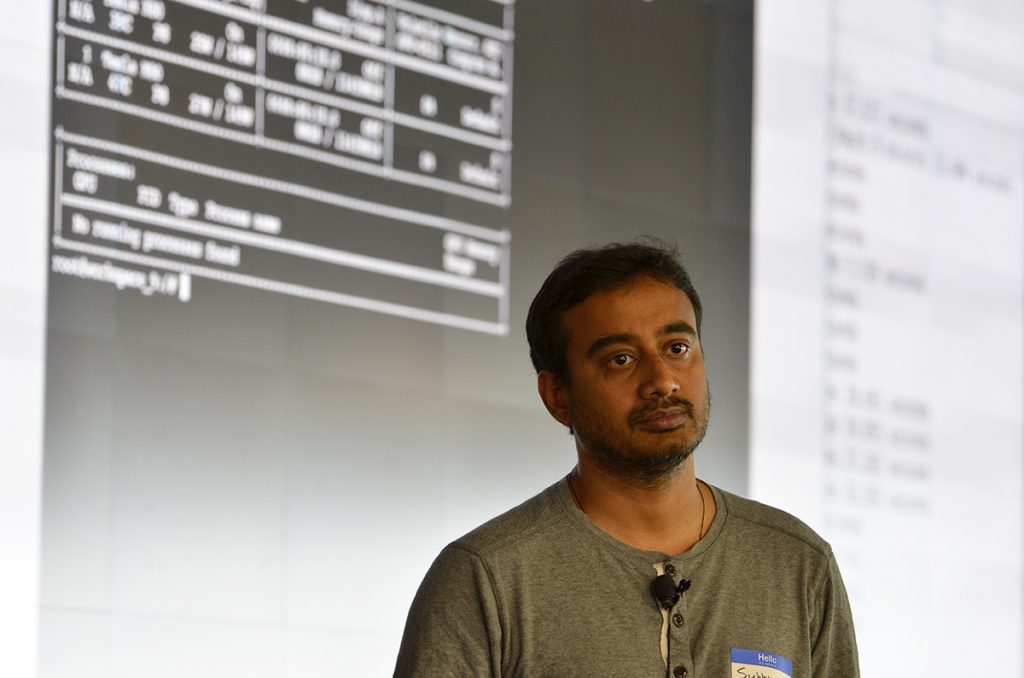 Subbu outlined the pitfalls that occur when initiating different scenarios of training a TensorFlow-based model on a GPU.

For instance, managing dependencies can be quite laboursome even with a single GPU implementation. When moving from CPU to GPU, “it can be hugely beneficial to explicitly put data tasks on CPU and number crunching (gradient calculations) on GPUs with tf.device(),” as Subbu noted.

In case of multiple GPUs, one also has to write additional code to define device placement with tf.device(). And more code-writing is needed to calculate gradients on each GPU and an average gradient for the update.

What about distributed TensorFlow? Assume you utilize one parameter server, a number of worker servers, and a shared file system. The code changes to introduce are as follows:

The TensorFlow on Spark scenario with one parameter server and a number of worker servers requires data to be placed in HDFS. In this case, one needs to rename a few variables of a distributed implementation. For example, (tf.train.Server() becomes TFNode.start_cluster_server(). In addition, one has to clearly understand multiple utils for reading/writing to HDFS.

A typical life cycle of a deep learning-based app involves development in a local environment, training a model on servers, and deployment in the cloud. In the context of a growing team and expanding resources, Subbu highlights “the huge untapped opportunity,” which resides in “the acceleration of the existing CPU resources and broader enterprise teams and initiatives.”

Cost-efficient on-demand GPU acceleration of the existing CPU resources may happen through adding Elastic GPUs to a data center or a cloud. 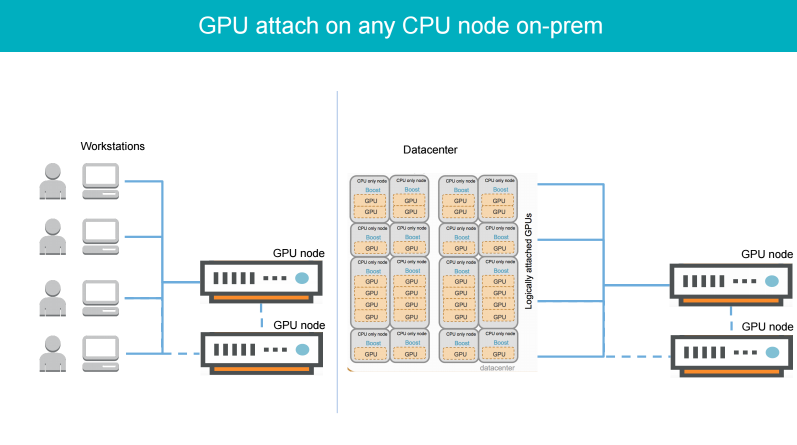 This way, development may start on CPU machines with notebooks, code editors, or any other tools of choice. Then, one can attach an Elastic GPU from within a data center, later on scale out to multiple ones with no code changes needed, or utilize a local GPU with attached Elastic GPUs from the data centers.

The approach offers accelerated computations with smart scheduling and auto-allocation across multiple concurrent workloads and users. As a bonus, Subbu noted, the underlying infrastructure “doesn’t have to be a money pit” through smart scaling.

Subbu then outlined how to simplify adding Elastic GPUs in the cloud or on-premises with Flex—Bitfusion’s AI platform. 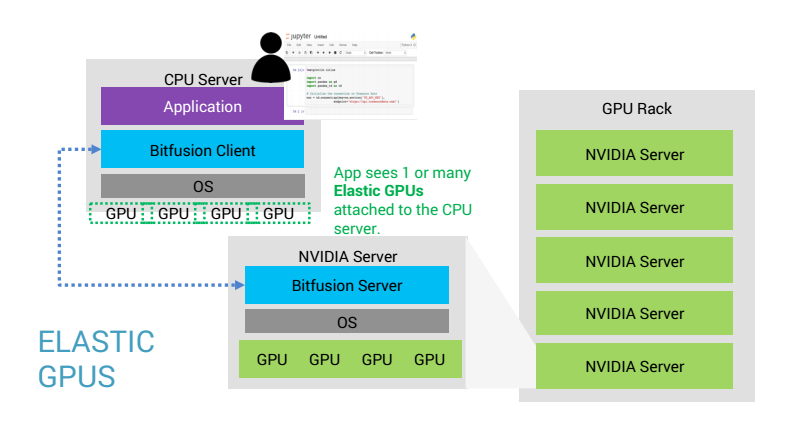 The whole AI infrastructure can be operated in 5 steps: 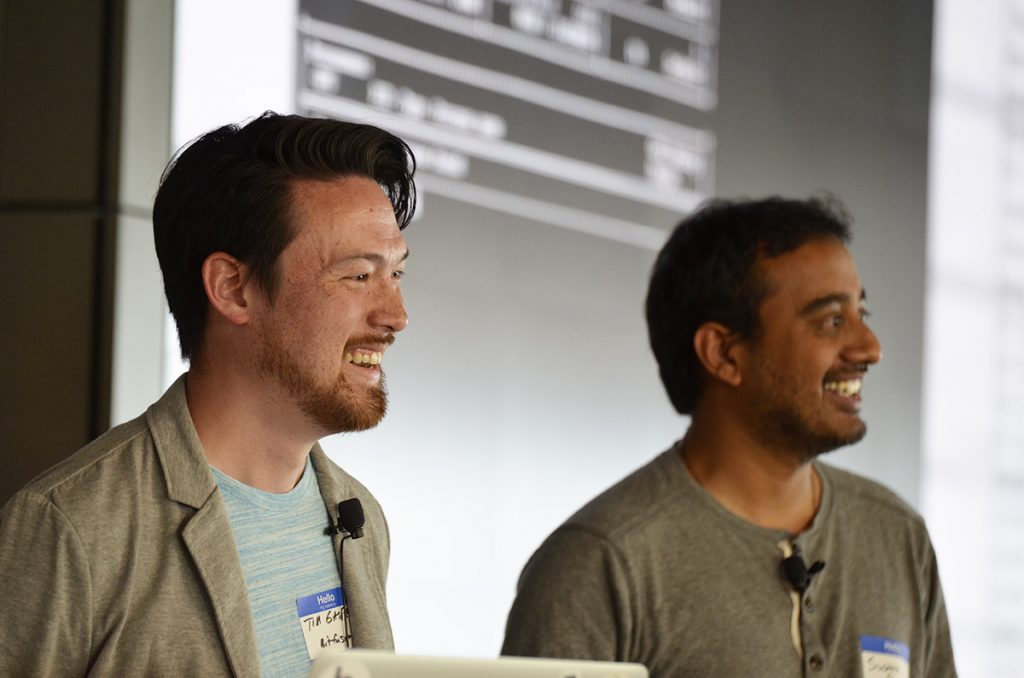 According to Bitfusion, this combined solution may enable up to “10x faster development, greater efficiency, and unlimited scalability.”

To demonstrate how this happens in practice, Tim Gasper, a Bitfusion’s fellow, provided a brief demo during the session.

Tim Gasper is a product manager at Bitfusion. With 9+ years in product management and marketing, he is experienced in building SaaS and enterprise software platforms utilizing big data, IoT, analytics, and cloud orchestration. Tim held key positions at Rackspace, CSC, and Infochimps (acquired by CSC in 2013). He also co-founded Keepstream, which was later acquired by Infochimps in 2011.

Why Estimating Car Damage with Machine Learning Is Hard
Previous

Mastering Game Development with Deep Reinforcement Learning and GPUs
Next